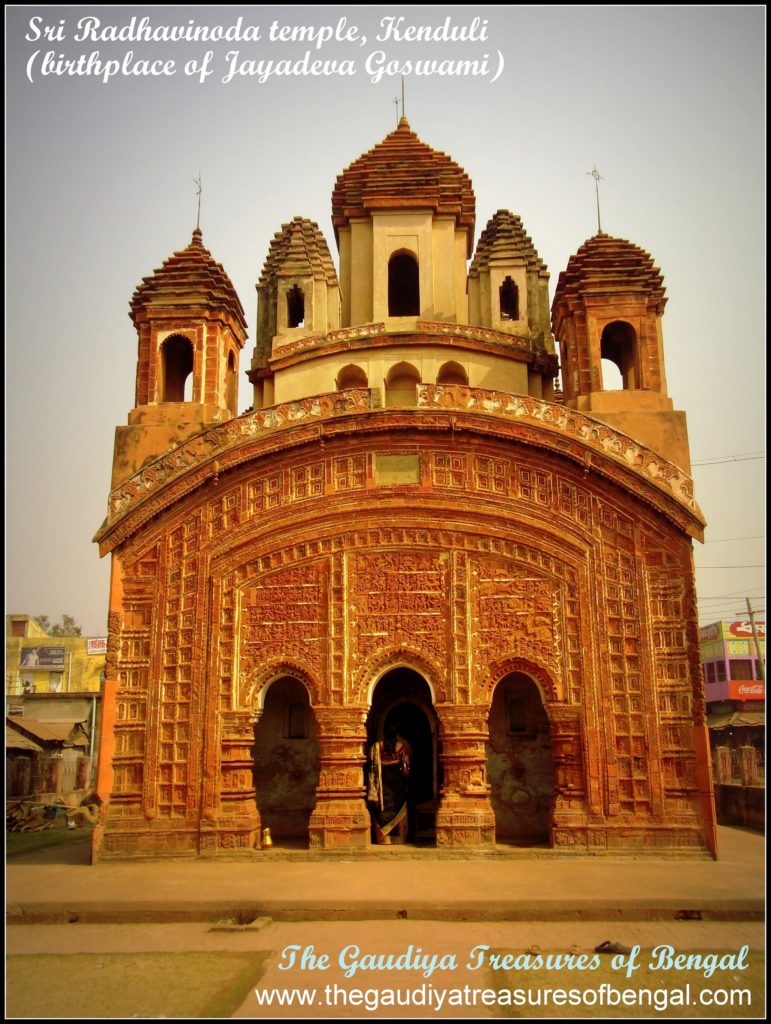 About 300 years prior to the appearance of Lord Caitanya, lived a great Bengali poet named Jayadeva Goswami. Jayadeva was born here at the village of Kenduli, situated on the banks of Ajay river, a place not very far from Shantiniketan. Kenduli came across as a calm, serene and a spiritually exalted destination, perfect for one desiring to escape into the realm of transcendence. ‘The Gaudiya Treasures of Bengal’ considers itself greatly fortunate to have been able to visit Kenduli, and pray for the causeless mercy of this great Vaishnava saint.We humbly beg for His blessings and empowerment in order to rewind the clock a few hundred years and pen a few lines in His glorification.

END_OF_DOCUMENT_TOKEN_TO_BE_REPLACED 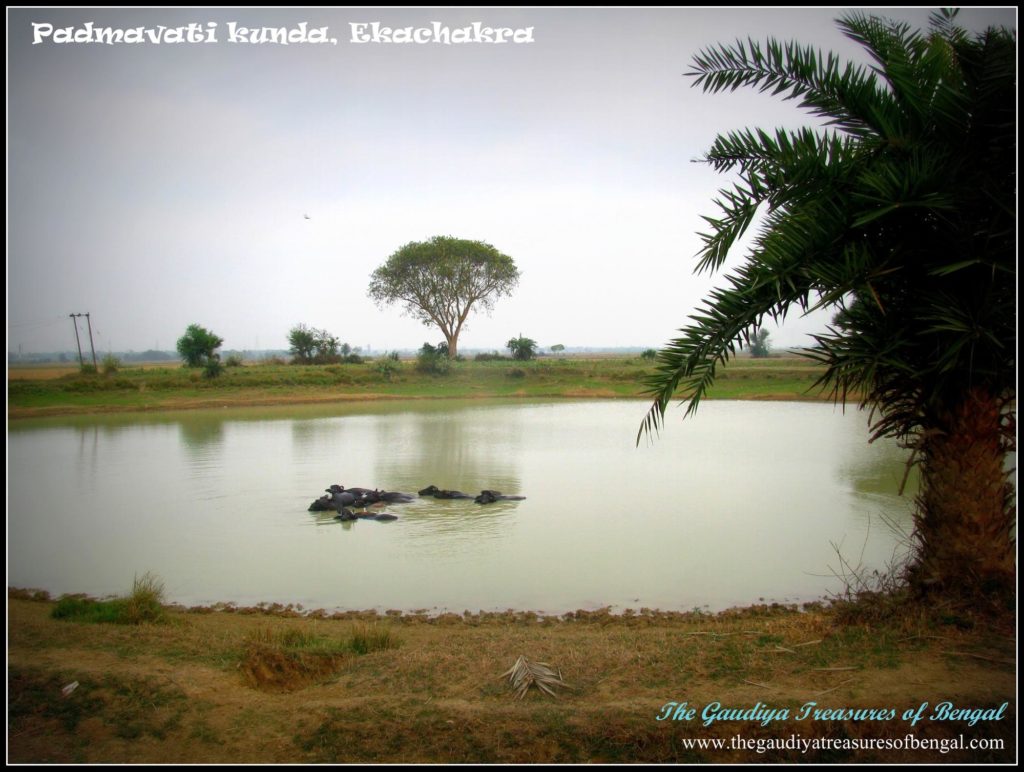 Lord Nityananda, is the incarnation of Lord Balarama ,and He had appeared here at Sri Ekachakra Dham, to assist Sri Caitanya Mahaprabhu, the Supreme Personality of Godhead, manifest the most magnanimous pastimes. In the battle of Kurukshetra, Sri Krishna broke His pledge of not using any weapons,by picking up a wheel ,and charging towards Bhishma, who was then fighting valiantly against Arjuna. Bhishma was a great devotee of the Lord, and seeing the Lord charge at him, he threw away his weapons and fell down in surrenderance.He began singing Krishna’s glories, hearing which the Lord calmed down and threw away the wheel He had picked up.This wheel is said to have flown all the way from kurukshetra to land here at this small village in Bengal which came to be subsequently known as Ekachakra.’Eka’ means one and ‘Chakra’ translates to wheel in bengali.Lord Nityananda Prabhu’s subsequent appearance and His display of the most merciful pastimes here ,has identified this sacred land as the king of all pilgrimages.Sri Nityananda Prabhu is the manifestation of the Lord’s devotion (bhakta svarupa) and without His mercy, it is not possible for one to obtain the shelter of Lord Caitanya. 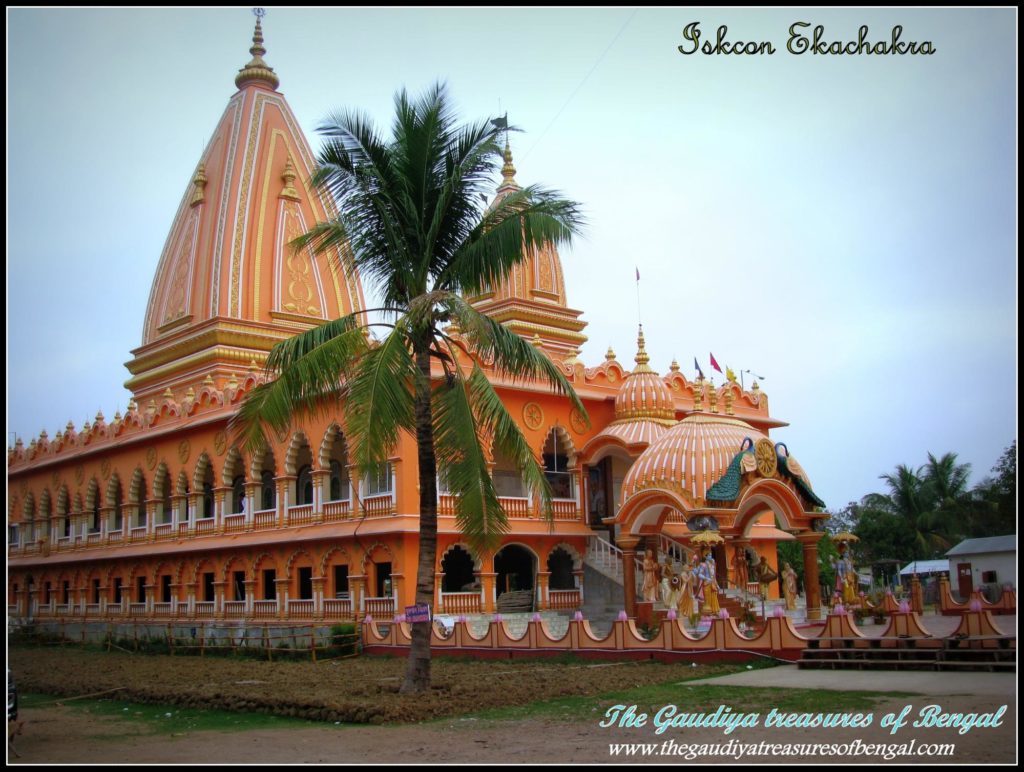 Sri Nitai is our original Guru who helps us connect back with Krishna. The spiritual master ,by whose mercy we cross over this vast ocean of material existence, is actually the representative of Lord Nitai.Narottama Das Thakura sings  ‘Nitai pada kamala, koti candra sushitala, je chayay jagata juray’.In other words, he reveals, that the lotus feet of Lord Nityananda is more soothing than a millions of moons, the shelter of which encapsulates the entire world.’The Gaudiya Treasures of Bengal’ considers itself utterly unqualified to narrate the qualities or pastimes of our Doyal (merciful) Nitai, and hence begs His permission so that He mercifully empowers us to do so. We consider our lives to be a success, being able to visit Sri Ekachakra dham and pray that she kindly accepts us as one of her dear servants.