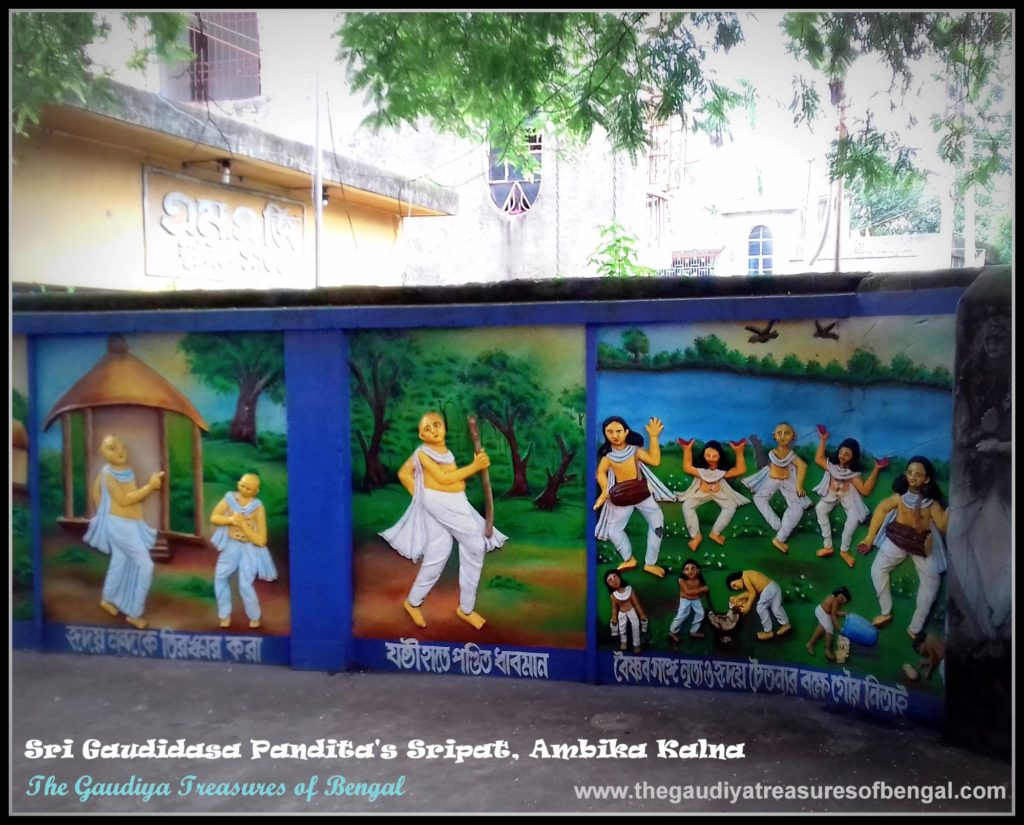 Bhaktisiddhanta Saraswati Thakura gives us some details of Gaudidas Pandit’s family in his anubhashya. It is mentioned that initially he used to reside in the village of Saligrama (a place not very far from Navadvipa) , and later he had shifted to the town of Ambika Kalna. Sri Gaudidas was very close to and enjoyed the patronage of King Krishna das, the son of Harihoda. Sri Gaudidas Pandit’s father was Sri Kamsari Mishra and his mother’s name was Srimati Kamala devi. He had five brothers – Damodara, Jagannatha, Suryadasa, Krishnadasa, and Nrsimha Caitanya. The elder brother of Gaudidas pandit, Sri Suryadasa, held an important post for the king of Bengal and was hence awarded with the title ‘Sarkhel’ (commander). Later the two daughters of Suryadasa Sarkel, Srimati Vasudha and Jahnava, got married to Lord Nityananda. The ‘Gaudiya Treasures of Bengal’ has covered this wonderful marriage pastime in a separate article entitled – ‘Lord Nityananda’s marriage with Srimati Jahnava and Vasudha, Ambika Kalna’

Kavi Karnapura mentions in Sri Gaura Gannoddesha dipika, that Sri Gaudidas Pandita was the incarnation of the cowherd boy Subala, an intimate friend of Sri Krishna and Balarama in Vrindavana.

Krishnadasa Kaviraja Goswami greatly glorifies Sri Gaudidas in his Caitanya Caritamrta stating that Sri Gaudidas was an emblem of devotional service and had the potency to receive and deliver ecstatic love of God to one and all (..Krishna prema dite nite dhare maha-shakti..). It is exclaimed that Sri Gaudidas had sacrificed everything for the service of Lord Nityananda ,even the fellowship of his own family. He was one of the primary associates to have assisted Lord Nityananda manifest His magnanimous pastimes. 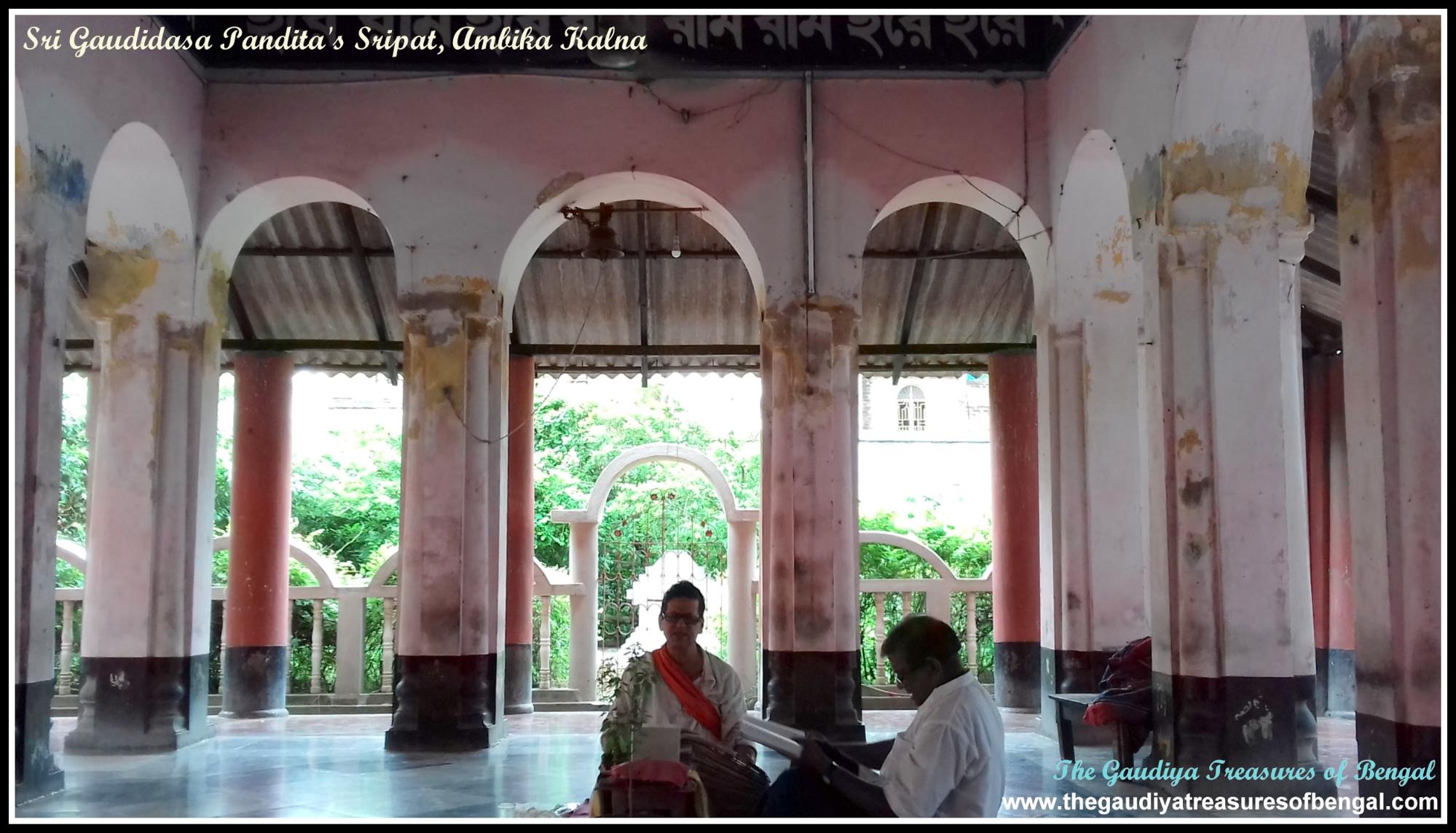 Sri Gaudidas’s Sripat at Kalna, houses his worshipable mesmerizing Gaura-Nitai deities. At this place, is also worshipped a copy of Bhagavad Gita, that was supposedly handwritten by Lord Caitanya and later gifted to Sri Gaudidas. One visiting the temple can also take darsana of an oar that Mahaprabhu had used to cross over the Ganges while travelling to meet Gaudidas at Kalna. According to the hearsay, Sriman Mahaprabhu had handed it over to Gaudidas, and asked him to similarly use it to help the fallen souls cross over the ocean of material existence.We shall try to narrate in this article a few of the innumerable pastimes that had taken place over the years at Sri Gaudidas’s sripat. We seek the mercy of this great personality in order to pen a few lines in his glorification.

END_OF_DOCUMENT_TOKEN_TO_BE_REPLACED 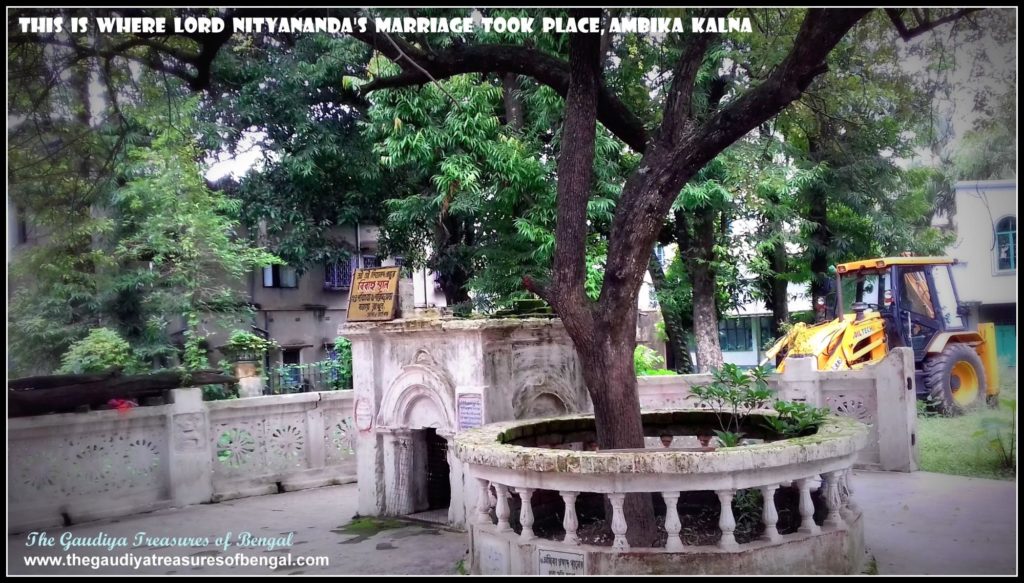 Kavi Karnapura writes in Sri Gaura Ganoddesha Dipika, that the two wives of Lord Balarama, Srimati Varuni and Srimati Revati devi , appeared in Lord Caitanya’s pastimes as Srimati Vasudha and Jahnava, the two dear wives of Sri Nityananda Prabhu. They were the daughters of the great personality named Suryadas Sarkhel , who had been Maharaja Kakudmi in his previous incarnation.

’The Gaudiya Treasures of Bengal’ shall try its best to narrate below the exalted pastimes of Lord Nityananda’s marriage as has been described by His dear disciple Srila Vrindavana Das Thakura, in his heart melting composition , ‘Sri Nityananda Caritamrta’. The readers are hereby requested to excuse any of our unintentional mistakes ,as we are mere fools who, not knowing our limits, are trying to delve deep into this esoteric well, to excavate the mesmerizing jewels of Doyal Nitai’s ecstatic pastimes.

Sri Nityananda Prabhu decided to marry and settle down in Bengal, after receiving Lord Caitanya’s instructions.Accompanying Sri Uddharana datta Thakura, His eternal associate, Lord Nitai set out for Ambika Kalna.Arriving at the doorsteps of Suryadasa Sarkhel, Nityananda prabhu waited outside as Sri Uddharana rushed inside to inform the residents of the Lord’s arrival.Suryadasa held a very important post in the service of the king of Gauda and was hence awarded with the title ‘Sarkhel’ (commander) .He used to earn a lot of money as his salary.Falling at Nityananda Prabhu’s lotus feet, Sri Suryadasa offered Him his humble obeisances and greeted the Lord wholeheartedly.The Lord then revealed that He had come to Kalna with a purpose and that He desired to have Suryadasa’s daughter as His wife.

Suryadasa sarkhel knew everything about the identity of Lord Caitanya and Nityananda.His brother Gaudidasa Pandita was the incarnation of the cowherd boy Subala, in Krishna’s Vrindavana pastimes. But by the influence of the Lord’s illusory energy, Suryadasa forgot everything at that particular moment and refused the Lord’s proposal upfront. He argued that it was not possible, as things had to be first considered based upon caste,stars and family background. He continued that he was a brahmana while Lord Nitai was an outcaste. Being refused,Lord Nityananda immediately left the place while Suryadasa went inside his house feeling disappointed.