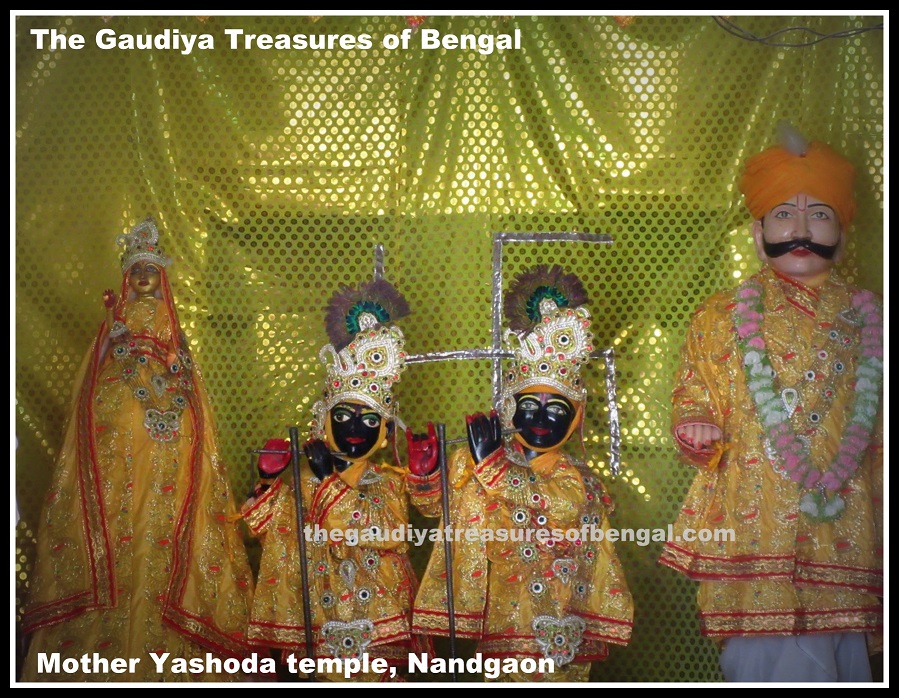 Nand Bhavan was the abode of Nanda Maharaja (Krishna’s father) in Nandgaon. Nandgaon is situated about 50 Kilometers from Mathura and takes about an hour to reach. Nand Bhavan is the most famous pilgrimage destination of Nandgaon and is visited by thousands of people each year. While residing in Gokul, demons like Putana, Trinavarta, and Satakasura tried to harm Krishna. Hence Nanda Maharaja and the cowherd community decided to shift elsewhere. After leaving Gokul Mahavan, Nanda maharaja and his cowherd community initially moved to the Chhatikara village. They subsequently moved to Kamyavan (Kaman), and other places before settling down at Nandgaon. Nanda Maharaja had built his palace on top of the Nandisvara hill, to protect little Krishna from the demons sent by Kansa. Nandisvara hill (meaning the Lord of Nandi) is believed to be a manifestation of Lord Shiva. Long ago, Shiva had performed severe penances desiring to witness the childhood pastimes of Krishna. Being pleased, Lord Krishna instructed him to manifest himself as a hill at Nandgaon. Accordingly, Shiva manifested himself as the Nandisvara hill and Lord Krishna performed His sweet pastimes upon this hill to fulfill the desires of His dear devotee. Krishna was six years and eight months old when He came to Nandgaon and lived here till he was ten years and seven months old, after which He left for Mathura.

The temples of Nand Bhavan 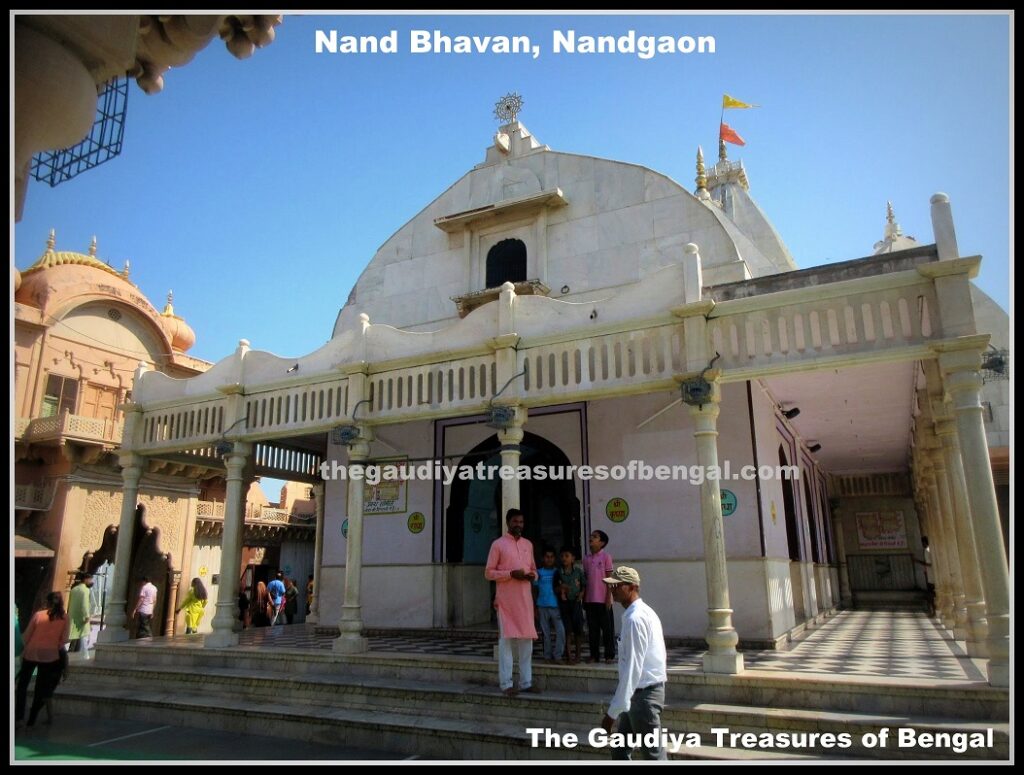 At the request of mother Yashoda, Radha rani used to visit Nand Bhavan and she used to cook for Sri Krishna. These deities of Krishna, Nanda Maharaja, and Yashoda were previously hidden inside a cave on the Nandisvara hill and were later discovered by Sanatana Goswami five hundred years ago. When Sri Chaitanya Mahaprabhu visited Nandgaon, He took darshan of these deities while they still rested in the cave.This is mentioned in Bhakti Ratnakara –

There is a Nandisvara Mahadeva temple in the palace courtyards. It is believed that Sri Nanda maharaja used to worship Lord Shiva at this place desiring the welfare of his child and family. There is a very interesting pastime associated with this temple. Once Lord Shiva came to Nanda Maharaja’s palace with the desire of seeing little Krishna. However, mother Yashoda denied him entry considering that his ash-covered body might frighten her child. Feeling discouraged, Shiva walked away and began meditating beneath a tree. Krishna then began crying. Not even the gopis could console Him. On the advice of the neighbors, mother Yashoda decided to invite Shiva as turning him away might have led to Krishna’s unhappiness. The gopis found Shiva meditating beneath the tree and brought him back to the palace. As soon as Krishna saw him, He stopped crying and smiled happily. Yashoda was relieved and asked Shiva how she could repay him. Shiva then requested to be allowed to meet Krishna from time to time and be provided with His food remnants.

There are a number of temples that surround the Nanda Maharaja temple of Nandisvara hill. The temples of Nitai Gauranga, Sri Rasa Bihari temple, Radha Madan Mohan temple, Yashoda mata temple, Giriraja Govardhan temple, Maa Manasa temple, are some of them. On the base of the Nandisvara hill, is a Narasimha temple. Nanda Maharaja used to worship Narasimha deva and Varaha deva.

Who was Nanda Maharaja and Yashoda ?

Nanda Maharaja, Krishna’s father, was the incarnation of Vasu ‘Drona’ and Yashoda, Krishna’s mother, was the incarnation of Drona’s wife ‘Dhara’. Previously, when Lord Brahma had instructed them to beget children, they expressed their desire to beget Krishna, the Supreme Lord, as their child. They wanted their reciprocations with Krishna to be so enchanting and captivating that simply by hearing them, one would cross over the cycles of birth and death. Brahma agreed and therefore in due course of time, Drona and Dhara appeared as Nanda Maharaja and Yashoda in Vraja where they served Krishna in the mood of parental affection. Nanda Maharaja and Yashoda devi were more fortunate than Vasudeva and Devaki, Krishna’s actual parents, because they could partake in Krishna’s most celebrated childhood pastimes. Simply by meditating upon these enchanting pastimes, one can achieve all perfection. 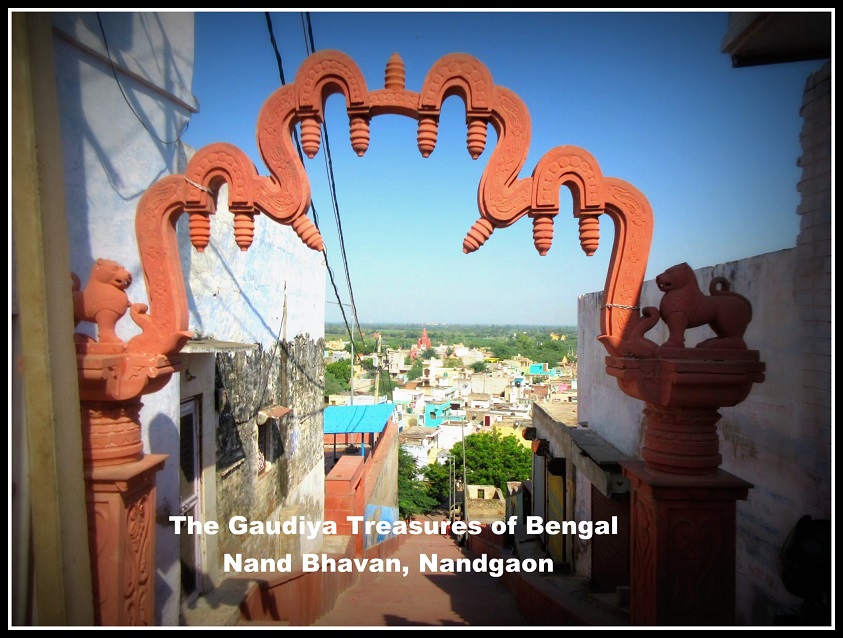 Delving deep into the scriptures we understand that no ordinary living being can become the parents of the Supreme Lord. Such a fortune cannot be attained even by the likes of Shiva, Brahma, or other demigods. Hence it must be noted that Nanda and Yashoda were not ordinary living beings. They are Krishna’s eternal parents in the spiritual world. But in order to play their role in this material world, they seek Brahma’s permission, simply to glorify Brahma as he is the creator of this material world.

Nanda Maharaja was the chief of the cowherds, and his primary responsibility was the protection of cows. It is understood that he possessed over nine lakh (900,000) cows and was quite rich. The cowherds sold milk and their milk products like butter, yogurt, cheese, etc, and thereby led prosperous lives. Nanda Maharaja was the son of Parjanya. Long ago Parjanya had worshiped Lord Narayana with a desire to beget a good son. Parjanya initially resided at Nandgaon (Nandagrama). After performing severe austerities he received the benediction that he would have five sons, out of which the middle one, known as Nanda, would become the best. Nanda’s son Krishna would be equally glorious and shall be worshiped by demigods. Parjanya resided at Nandgaon for some time but later moved to Gokul out of fear of the Kesi demon.

Nand Bhavan is well connected via roadways. It is one of the most prominent sites of Nandgaon and is situated about 10 km from Barsana, 30 km from Govardhan, 32 km from Jatipura, 55 km from Mathura, 48 km from Vrindavan and 67 km from Gokul. ‘Kosi Kalan’, the nearest railway station, is about 12 kilometers away.