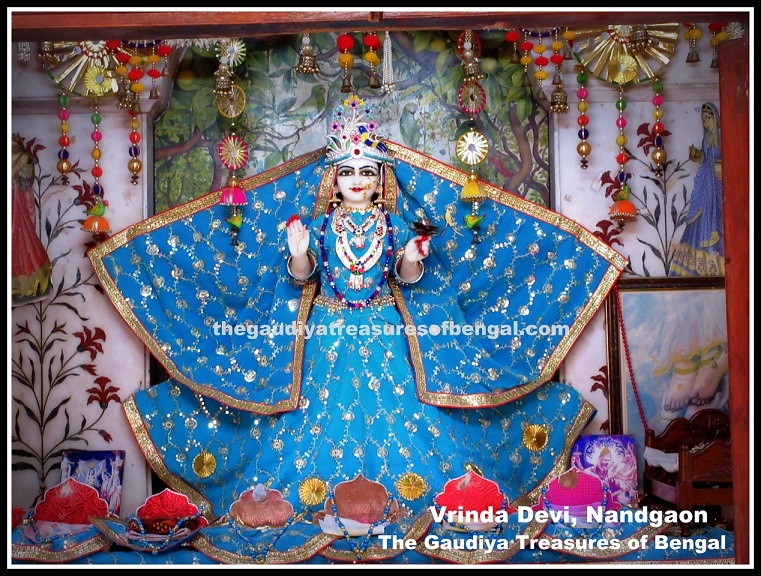 The forest of Vrindavan derives its name from Srimati Vrinda devi. Tulasi is an expansion of Vrinda devi. Tulasi, Govardhan, and Yamuna are eternally present in the spiritual world. They manifest themselves in this material world only to purify the living entities and bestow upon them the pure love of God. In a previous age, Vrinda, born as the daughter of King Kedera, had executed severe austerities in the forest of Vrindavan. She had performed penances for sixty thousand years. After sanctifying Vrindavan, she attained the spiritual abode. Being pleased with her, Lord Vishnu had granted the boon that any austerities performed in Vrindavan would fructify quickly and beget excellent results. Tulasi, an expansion of Vrinda devi, later appeared as the daughter of King Kusadhvaja and also perfected herself after executing severe penances in Vrindavan. Tulasi, who always serves Lord Krishna’s lotus feet, is very dear to Him. Krishna does not accept any offering without a Tulasi leaf. Vrinda devi perpetually resides in Vrindavan and is also a friend of Radharani. She possesses a beautiful molten gold complexion, wears bluish garments, and adorns herself with pearls and flowers. Her father is Chandrabhanu and her mother is Phullara devi. She is married to Mahipala Gopa and her sister’s name is Manjari. On the instructions of Paurnamasi (Yogmaya devi), Vrinda devi always yearns to arrange meetings between Radha and Krishna. 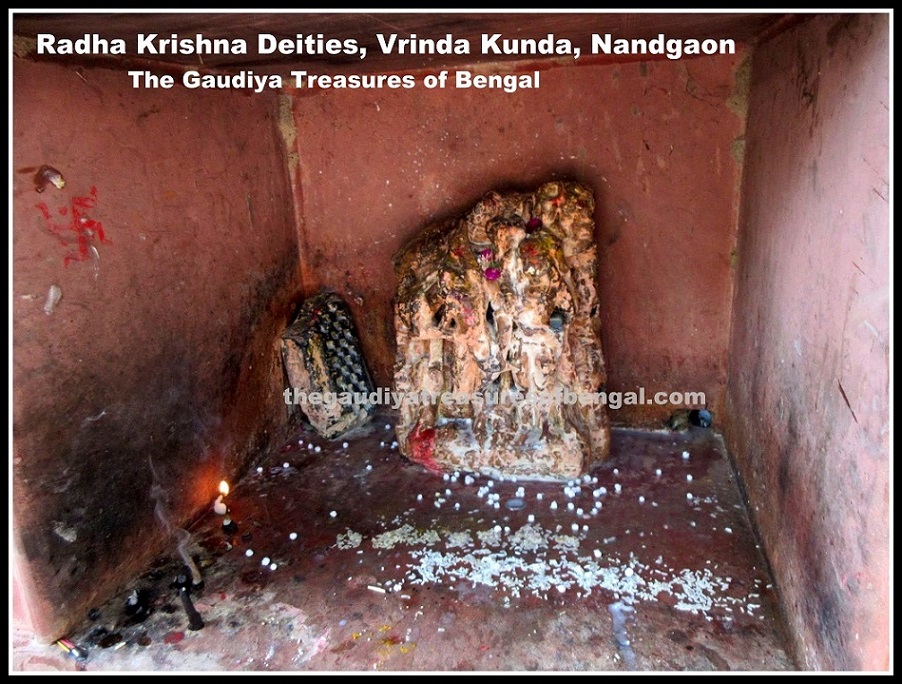 Vrinda devi ornaments the groves and bowers, producing a festive atmosphere, for Radha and Krishna to manifest their sweet amorous pastimes. She is responsible for waking up Radha and Krishna in their groves before sunrise so that they could reach Yavat and Nandgaon respectively without arousing suspicion. She furnishes all the necessary paraphernalia like swings, musical instruments, colors, ornaments, food, drinks, and other accompaniments so that Krishna and the gopis could enjoy each other’s association. She keeps a yellow parrot named Daksha who in turn supervises thousands of other parrots. These parrots act as spies to warn Vrinda devi of any unforeseen events, especially the close presence of Jatila (Radha’s mother-in-law) or Chandravali (Radha’s fiercest rival). Vrinda devi is the proprietor of Vrindavan but she offers all her Kingdom at the lotus feet of Radha. Hence, Radharani is known as Vrindavaneshwari (queen of Vrindavan). Without the grace of Vrinda devi, one can’t gain entrance into the transcendental abode of Vrindavan or the confidential pastimes of Radha and Krishna.

Vrinda devi is worshiped at quite a number of places in Vraja Mandala. For instance, Vrinda devi is worshiped here at Nandgaon, she is worshiped in Kamyavan (Kaman), and also at the ‘Rupa Sanatana Gaudiya Math’ in Seva Kunja, Vrindavan. Here at Vrinda Devi temple in Nandgaon, is also worshiped an ancient stone-carved deity of Radha and Krishna that was installed several thousand years ago by King Vajranabh, the great-grandson of Krishna. The deities have since been desecrated by the invaders. Hence they are no longer worshiped but they still give their darshan, by the side of the main temple, under an old Chokara (Khejri) tree. Thieves have tried stealing this deity on several occasions but they have been miraculously recovered each time. 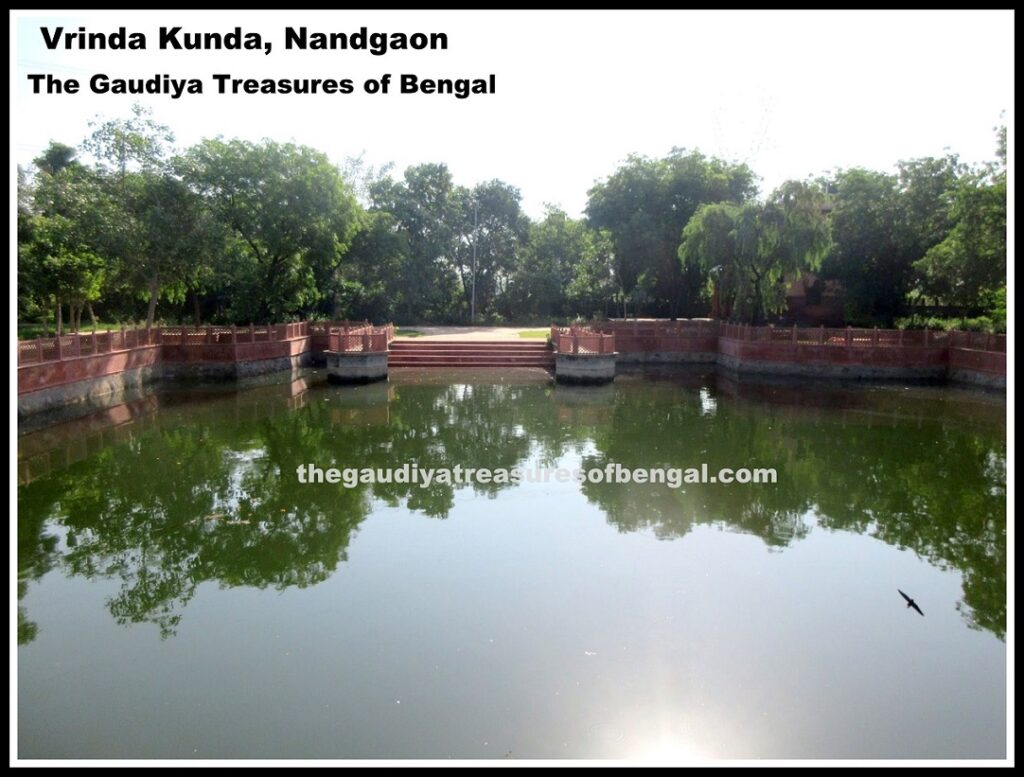 An enchanting deity of Vrinda devi is now worshiped in the main temple. She carries Daksha (yellow parrot) in her left hand. The charm of the temple is enriched by the beautifully preserved garden that surrounds it. The serene temple compound houses two Kundas – Vrinda Kunda and Gupta Kunda. Vrinda Kunda is where Vrinda Devi meditates on arranging the meetings between Radha and Krishna. Gupta Kunda is where Radharani is said to meet with Krishna in complete secrecy. It is believed that Radha and Krishna eternally meet with each other in the mornings at Gupta Kunda, during mid-day at Radha Kunda, and at the Radha Govinda temple (in Vrindavan) at night. 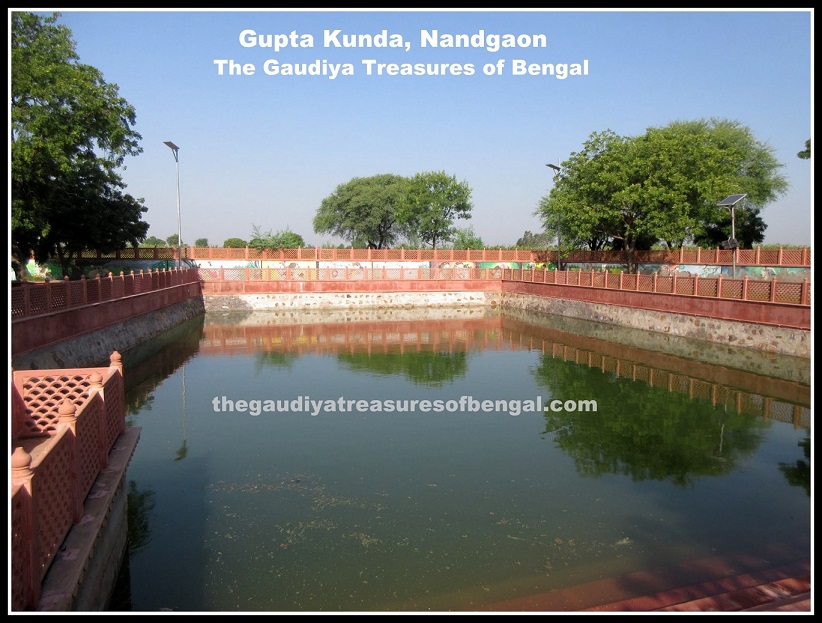 Madhava das, also referred to as Madhava Baba, was a scholar and a Vaishnava saint who played a key role in rescuing and preserving Vrinda Kunda. He also saved Pavana Sarovar, Kalavata hills, and other pastime places of Krishna from the clutches of ignorant land developers and property builders. Later he secured the property of Vrinda Kunda and with the help of the government, excavated the two sacred ponds – Vrinda Kunda and Gupta Kunda. He later installed the deity of Vrinda devi in the early 1980s. 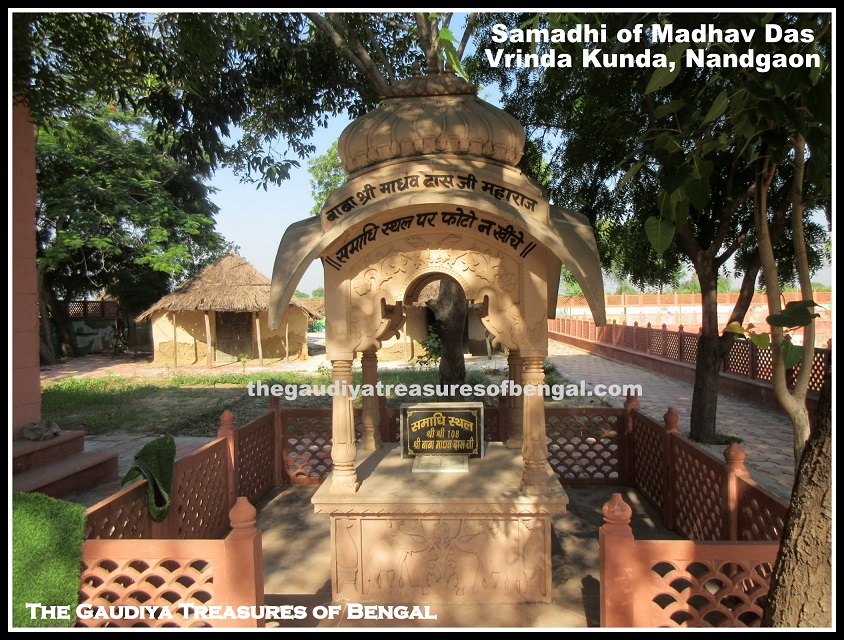 When Madhava baba became terminally ill, he handed over the temple and its service to the devotees of Iskcon in the year 1989. He passed away from this world on the morning of March 27, 1990, at Iskcon Vrindavan. Madhava baba’s samadhi tomb is placed on the bank of Gupta Kunda. Since then the property has been nicely renovated and the two Kundas have been refilled with sweet Yamuna water.