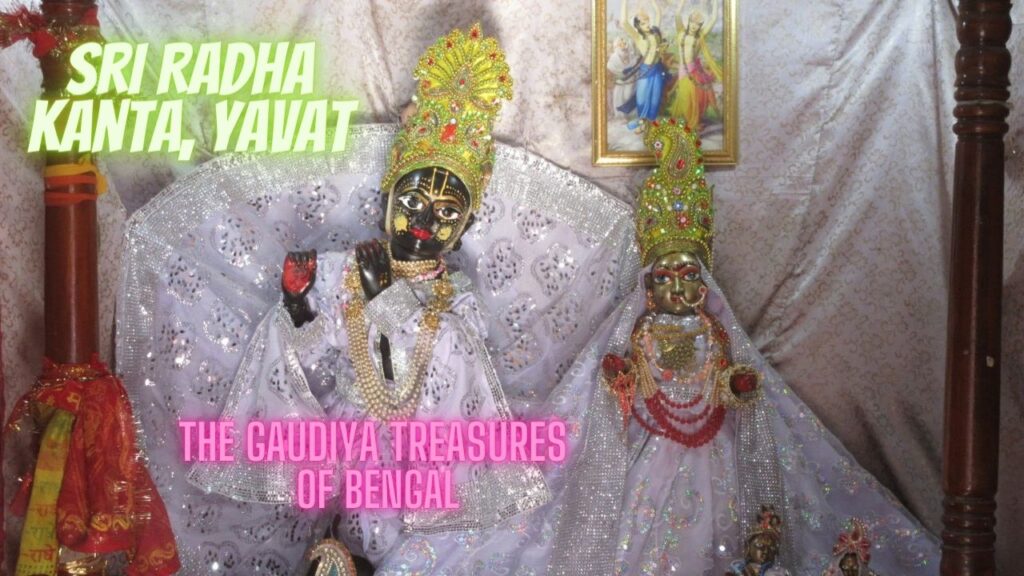 ‘Yavat’ or ‘Javat’ is a small village located to the north of the Nandisvara hills. It is about a 10 minutes drive from Nandgaon. Radha and Krishna have performed their innumerable confidential pastimes here at Yavat. This is where Radharani used to stay with her in-laws after her marriage. She used to live here with her husband Abhimanyu, mother-in-law Jatila, and sister-in-law Kutila.

Radha was married to Abhimanyu on the advice of Paurnamasi devi (Yogmaya). It must be noted that Radha and Krishna are intrinsically one and cannot be separated. They are one who have manifested themselves into two, solely to enjoy their sweet pastimes. Hence, it was only to introduce Parakiya bhava (relationship outside marriage), that Radha got married to Abhimanyu. Relationship with Krishna in Parakiya bhava (love outside marriage) is far more spiritually advanced and intense than Svakiya bhava (love within the institution of marriage), as it requires overcoming countless obstacles to defend and nourish one’s love. However, it must be remembered that this ‘Parakiya rasa’ belongs to the spiritual world and should not be imitated in this material world. In other words, ‘Parakiya bhava’ can only be relished when Krishna is the center of the relationship. 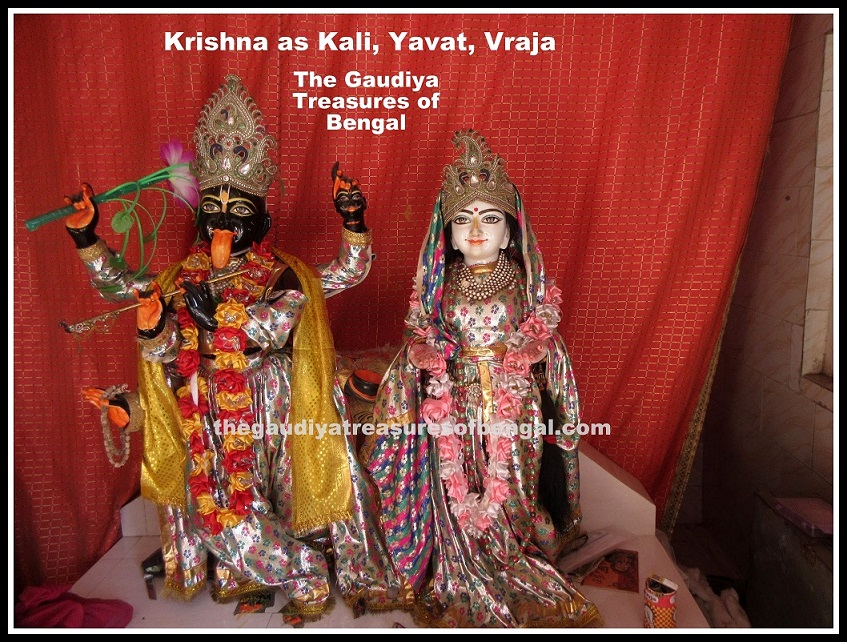 Although Abhimanyu was Radha’s husband, by the dint of Yogamaya’s prowess, he could not even touch her shadow. Instead, he always remained busy tending his cows or spending time with friends. Jatila and Kutila stayed occupied in household chores. Taking this opportunity and on various deceptive pretexts, the sakhas and sakhis would arrange meetings between Radha and Krishna. Vrishabhanu Maharaja had built a beautiful palace for Radhika, his daughter, in Yavat. Mukhara, Radharani’s grandmother, used to come and meet with her every morning here at Yavat. Kutila, Radha’s sister-in-law, would take pleasure in finding faults with Radharani. Below are some of the charming confidential pastimes to have taken place in Yavat.

On the pretext of worshiping Surya deva, Radharani would take a narrow path and wait in the kadamba forest for her beloved Krishna. Krishna would then approach and catch hold of her cloth and in this way, the divine couple would enjoy with each other.

Krishna always out-smarted Jatila and Kutila who could never catch Him red-handed. Krishna, who is fluent in all languages, used to make the sound of a Kokila bird (cuckoo) to send signals to Radharani. But once, He was unable to meet her. Krishna then approached their house and started cooing in an attempt to send a signal to Radhika. However, whenever Radha tried to open the door, the sound of her ornaments alerted Jatila. The vigilant Jatila then harshly called out, “Who’s there? Who’s there?”. Hearing Jatila, Krishna concealed Himself within a ber tree in their courtyard. This continued all night long, and Krishna’s attempts to meet with Radhika were repeatedly foiled. So He then spent the entire night hiding behind the ber tree in Abhimanyu’s courtyard here at Yavat. This pastime has been described by Rupa Goswami in Ujjavala Nilamani – 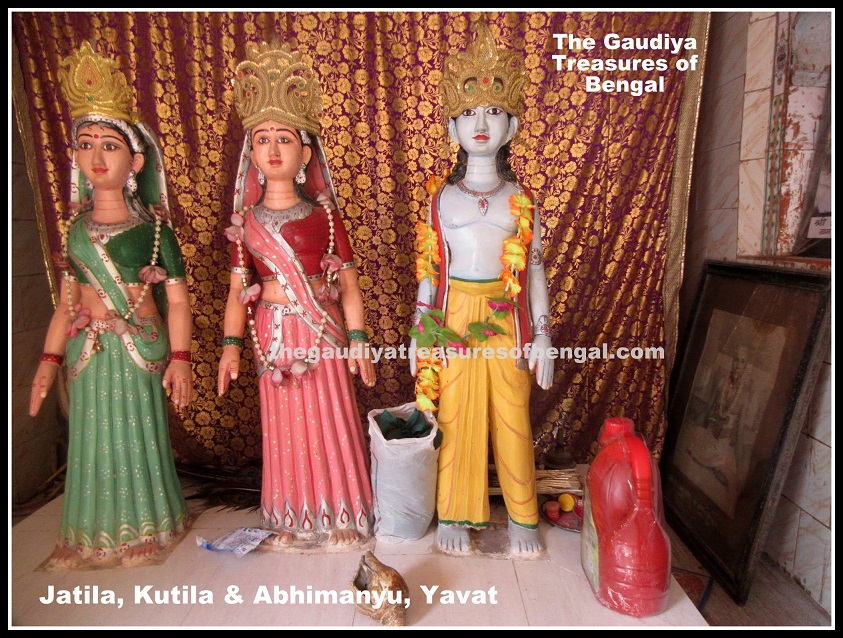 To the west of Yavat, is a forest where many cuckoos would sing. Once Krishna entered the forest and made the sound of cuckoos to send a signal to His beloved. Reciprocating to Krishna’s sound, thousands of other cuckoos began cooing, creating a huge ruckus. When Jatila heard the sound, she became very curious. Jatila asked Vishaka if she had heard anything like that before. Vishaka sought permission from Jatila so that she and Radharani could go to the forest and find out more. In this way, Radha entered the forest with her sakhis where she was able to meet with Krishna and enjoy unlimitedly. This forest is hence also known as ‘Kokilavan’ as it was here that Krishna made sounds of a Kokila bird (cuckoo) to send signals to Radharani. 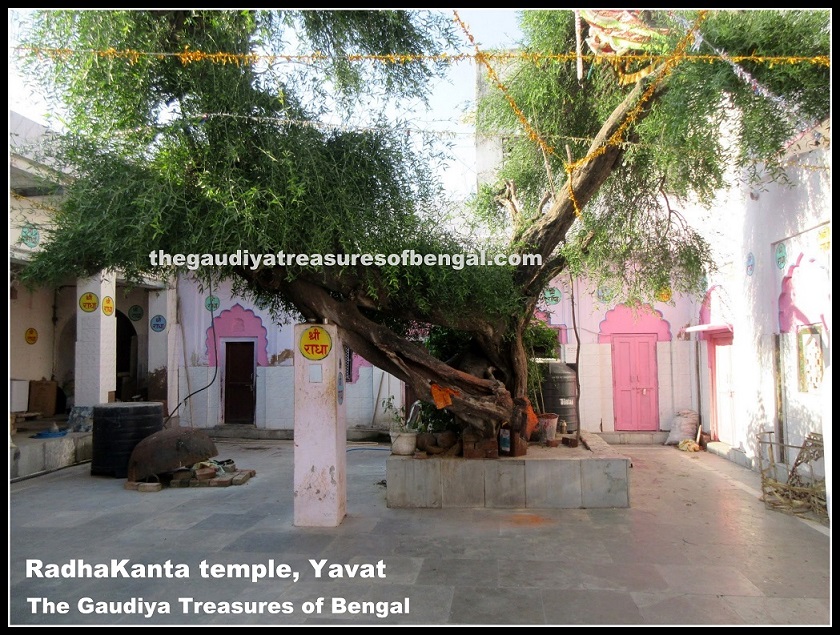 There is also a deity of Krishna worshiped in the Yavat temple, where He manifests Himself as the goddess Kali. This deity is believed to be ancient and self-manifested. There is a beautiful pastime associated with this deity. It is said that once Radha and Krishna were meeting each other in the forest. When Jatila and Kutila came to know, they informed Abhimanyu. They emphasized that Abhimanyu should rush to the forest to catch her wife red-handed. So Abhimanyu sprinted to the forest. On seeing Abhimanyu, Radha became scared. She was standing there with Krishna and was about to offer Him something. Krishna comforted her and told her not to worry. Abhimanyu came right up to them and then to Radha’s surprise, offered his prostrated obeisances. Radha turned around to see that Krishna had assumed the form of mother Kali. Abhimanyu had supposed that Radha had come to the forest to worship the goddess and was therefore delighted.

‘Yavat’ or ‘Javat’ is a small village located to the north of the Nandisvara hills. It is situated about 5 Kilometers from Nandgaon and about 8 Kilometers from Kosi Kalan railway station.