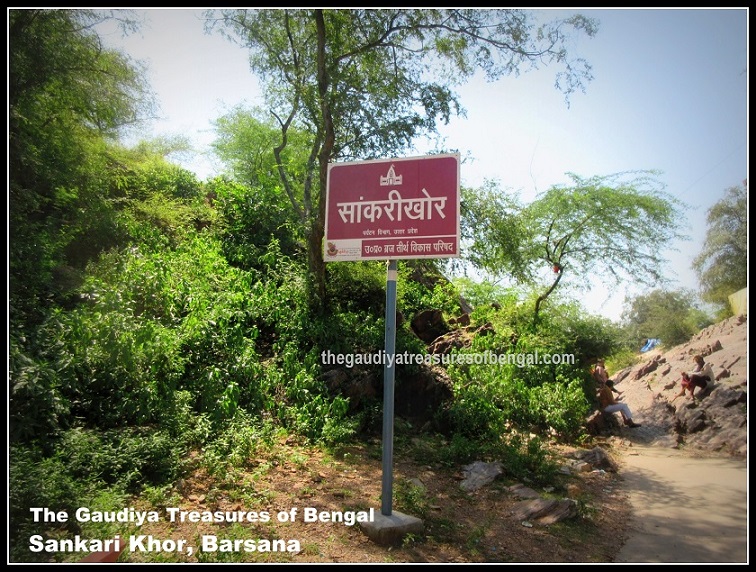 Padma Purana states that Lord Brahma had previously performed severe austerities with the desire to witness the pastimes of Radha and Krishna and obtain the dust of their lotus feet upon his head. Being pleased with Brahma, Krishna granted him the boon to manifest himself as mountains here at Barsana. As a result, Brahma manifested himself as the Brahmagiri mountains here at Barsana. Brahmagiri has four different peaks representing the four heads of Lord Brahma. There is a second hill situated right next to Brahmagiri known as Vilasa Parvata or Vishnu Parvata which is considered to be a manifestation of Lord Vishnu. The four peaks of these hills are – Bhangarh, Managarh, Danagarh, and Vilasgarh. Bhangarh (the highest of the four peaks) is where Vrishabhanu Maharaja had established his palace and where Radharani manifested her childhood pastimes. Sankari Khor is the narrow passage between Brahmagiri Parvata and the Vilasa Parvata. ‘Sankari’ means narrow and the word ‘Khor’ translates to lane. Hence ‘Sankari Khor’ refers to the narrow passage between the two mountains through which one can only pass in a single file. One might be lean or bulky but no matter how much one tries, only a single person can walk through Sankari Khor. It is impossible for two to walk side by side. It is here at Sankari Khor that Krishna manifested His  Dana Keli pastimes.

On their way to selling their pots filled with milk and milk products, the Gopis would make rounds of the nearby villages and marketplaces. The gopis would regularly use the narrow passage of Sankari Khor to deliver their goods to the surrounding villages. Every day, Krishna along with His cowherd friends would intercept the Gopis on their way by blocking the passage. Acting as the tax collector, Krishna would then demand taxes in the form of milk products, before allowing the Gopis through. The girls would sometimes decline to give in to Krishna’s demands and would push their way forward. The cowherd boys would then push back causing a tug of war. Sometimes the girls would give in to the demands and at times, Krishna would forcibly extract His due. The cowherd boys would hurl pebbles at the clay pots, breaking them in the process. As the milk would stream out of these pots, the boys would scamper to swallow them. The girls would try in vain to seal the holes with their hands but the boys, overlooking their frustration, would throw more pebbles to perforate the pots even further. The rocks at ‘Sankari Khor’ still carry the lotus handprints of Sri Krishna and the white spots left by the spilled yogurt. This tax-collecting (dana Keli) pastime became a daily chore here at Sankari Khor. 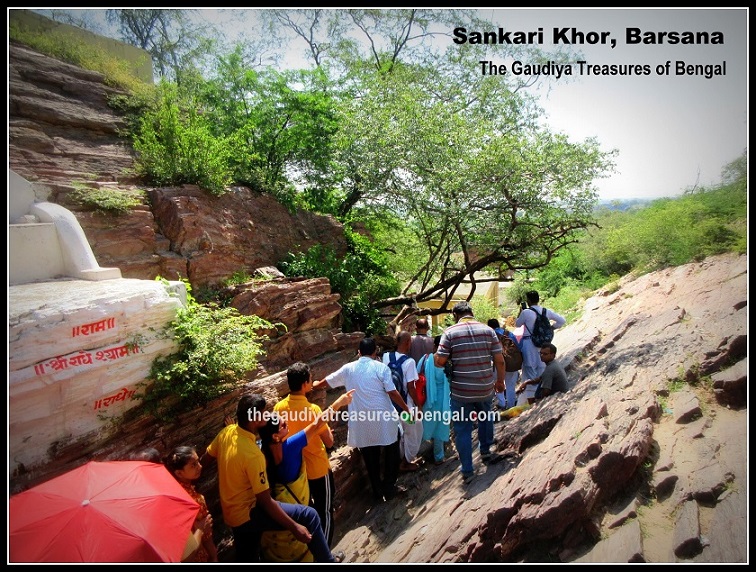 Having had enough of this daily torment, the gopis plotted retaliation. One fine day, many of them hid within the thick bushes on either side of Sankari Khor, while a few of them continued their passage as usual. When they were stopped by Krishna and His friends, these hiding gopis descended on the mischievous gopas (cowherd boys) like soldiers. They grabbed the boys, tied their shikhas (hair locks) to the branches, and humiliated them to their hearts’ content. They were finally freed due to the compassion Radharani felt for Krishna’s misery, but only after Sri Krishna along with all His associates, apologized for their actions and surrendered to the will of Srimati Radharani. 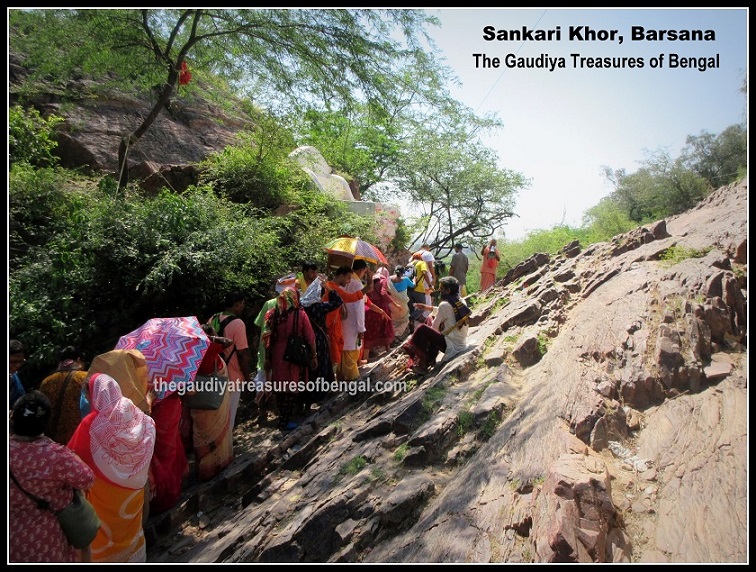 At Sankari Khor, devotees offer milk and yogurt to the rocks to commemorate the pastime of Lord Krishna playing the role of a tax collector.

Sankari Khor is a narrow passage situated at the conjunction of Brahmagiri hills and Vishnu hills. It is located about 1 Kilometer from Barsana Bus stand and about 2 kilometers from Barsana Sreeji mandir. One can hire a local motorcycle to visit this sacred pastime place.