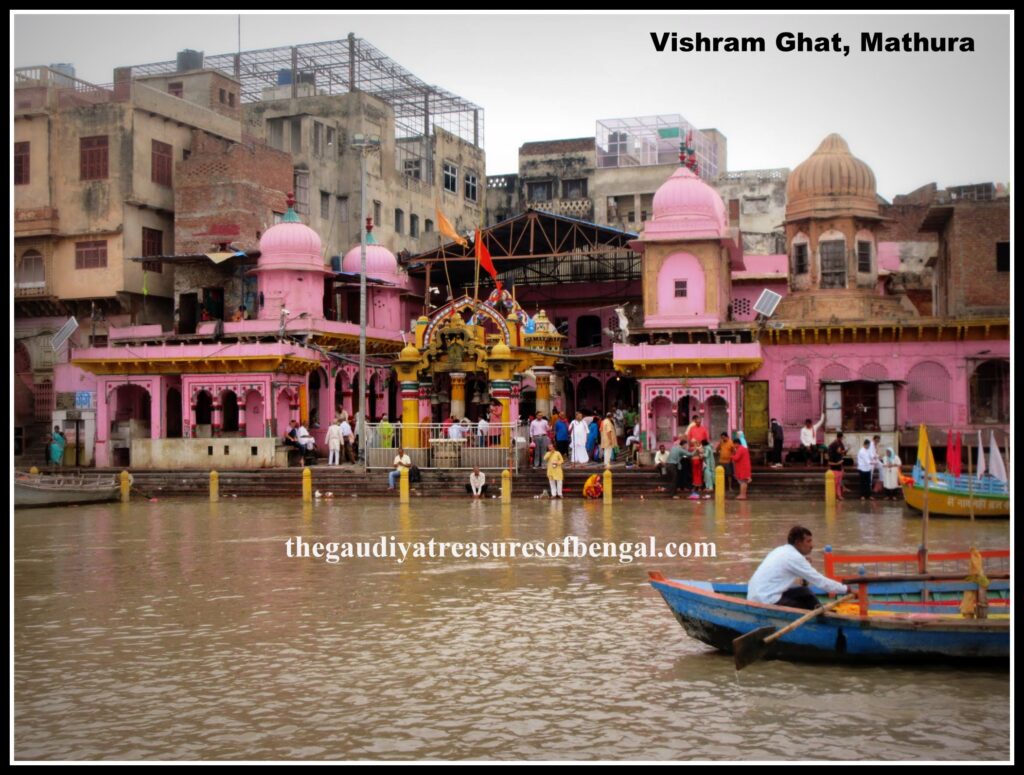 ‘Vishrama Ghat’ or ‘Vishranti tirtha’ is one of the most exalted pilgrimage destinations of Vraja Mandala. It was here that Lord Krishna took rest after killing Kansa, His tyrannical maternal uncle. The word ‘Vishram’ literally translates to ‘rest’ and the word ‘Ghat’ refers to a river bank. Thus the name ‘Vishram Ghat’ came into existence after Lord Krishna rested at this place. Vishram Ghat is also the holy place where Lord Varahadeva rested after slaying the demon Hiranyaksha. Situated on the bank of Yamuna, Vishrama Ghat is a revered place of worship for devotees. The circumambulation of all the holy sites of Mathura starts and ends at Vishram Ghat. Vishram Ghat is lined with elegant temples, and some of the most important temples of Mathura including Mukut Temple, Radha-Damodar, Murli Manohar, Neelkantheshwar, Yamuna-Krishna, Langali Hanuman, and Narasimha deva temples are situated in its close vicinity.

Devotees take a holy dip in the river and offer lamps at Vishram Ghat every day in the morning and evening. People traveling from across the world light oil lamps and set them floating in the river at this sacred place. The sparkling reflection of the illuminated lamps drifting on the serene Yamuna presents a mesmerizing view. Various rituals including offering oblations to ancestors are performed at this holy site.

Sri Chaitanya Mahaprabhu also took His bath and rested here at Vishram Ghat while undertaking His Vraja Mandala Parikrama. He then proceeded to take darshan of Keshava, the deity of Krishna at ‘Janmasthan’ (Krishna’s birthplace). This is confirmed in Sri Chaitanya Charitamrita –

Tato-visranti-tirtha-kyan-tirthamaho-vinashanam
Samsara-maru-sanchar-kleshavisrantinda-nrinam
–
Hence forward, people shall get relief from treading the desert of material existence and become absolved of their sins simply by taking shelter of Visram Ghat (Visranti tirtha). 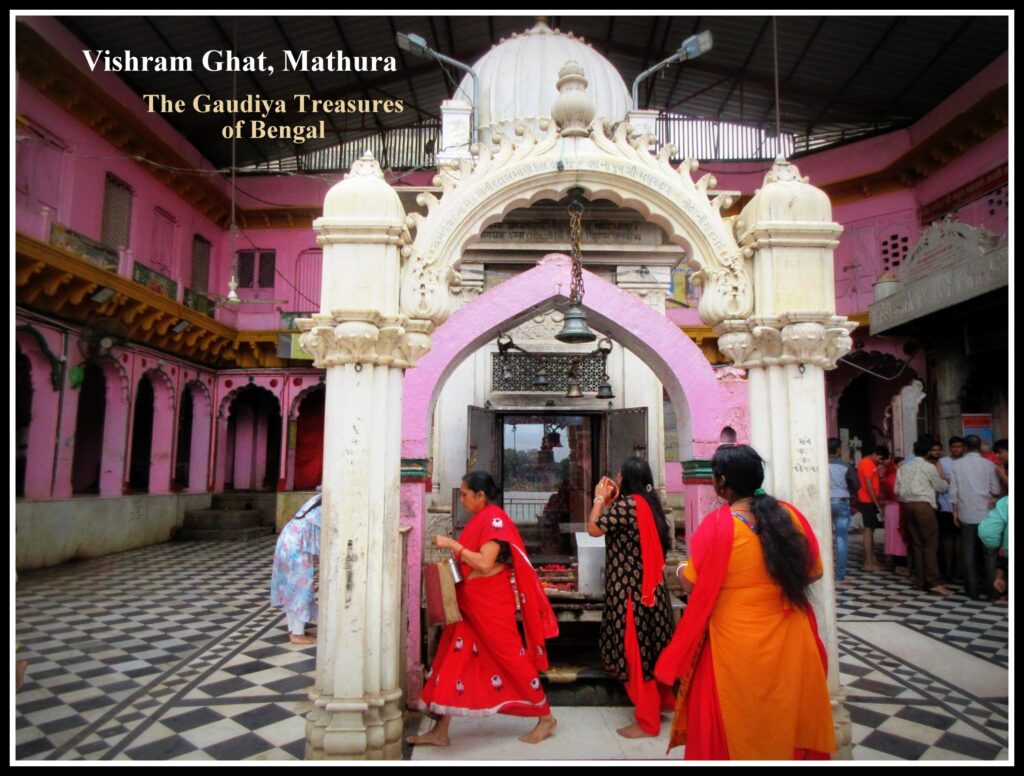 It is further stated in Saura Purana that those who bathe here at Visram Ghat and worship the Supreme Lord (Achyuta), attain freedom from repeated birth and death and become qualified for liberation.

The Mathura Khanda of Skanda Purana states : ‘Is there any type of result that cannot be attained in Mathura, where Kshetrapala Mahadeva exists eternally and where there exists holy places like Vishram Ghat? Mathura bestows the three objects of human life (religion, wealth and sense gratification) to those who wish to enjoy material pleasures. Mathura grants salvation to those who seek it and it grants devotional qualities to the devotees. Wise men should take shelter of Mathura’.

The Killing of Kansa

When Krishna and Balarama returned to Mathura, Kansa was afraid that his end was near. He knew that Krishna, the eighth son of Devaki, was predestined to kill him. Kansa became scared on learning that Krishna and Balarama had effortlessly shattered the sacrificial bow and killed all the soldiers he had sent to arrest them. The next morning Krishna and Balarama entered the wrestling arena, to experience the great festivities. The two brothers were attacked by an elephant named Kuvalayapida, at the behest of their keeper. After teasing the elephant for some time, Lord Krishna finally yanked out one of the elephant’s tusks and killed the elephant along with its keeper.

Thereafter, Canura and Mustika, the strongest of Kansa’s wrestlers, challenged Krishna and Balarama respectively to a fight. The audience was not happy though, as they felt that the fighters were unevenly matched. Canura and Mustika were immensely powerful while Krishna and Balarama were mere boys. The fighters locked themselves hand to hand, leg to leg, and began pressing against each other. They smashed and dragged each other. The intensity of the fight increased with every moment. Krishna then chose to put an end to the fight. He struck Canura thrice with His fists and catching hold of his two hands wheeled him around. Canura immediately lost his life and while falling down his fashioned ornaments were dispersed all over the place. When Mustika struck Balarama, He returned the favor by striking the powerful wrestler. The powerful Mustika trembled and vomited blood. He collapsed just like a tree in a hurricane. 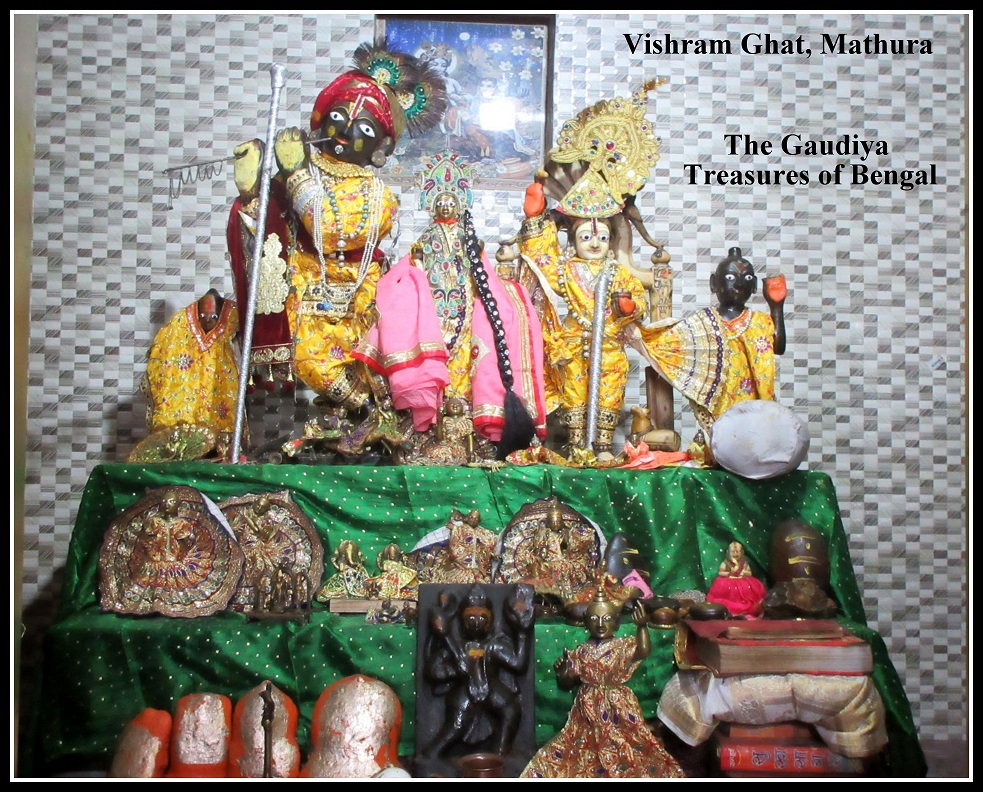 Witnessing Canura and Mustika dead, a wrestler named Kuta challenged Krishna and Balarama. Lord Balarama immediately caught hold of him and killed him effortlessly. Thereafter, Sala, Tosala, and other wrestlers came forward, but the two brothers killed all of them without wasting any time. The rest of the fighters fled the arena out of fear. The cowherd boys congratulated Krishna and Balarama and blew upon their trumpets. This further angered Kansa who could not accept the victory of Krishna and Balarama. He immediately ordered the band to stop playing and asked his soldiers to drive Krishna and Balarama away from Mathura. He ordered Nanda Maharaja to be killed. Kansa also ordered for the cowherd boys accompanying Krishna to be plundered and their riches taken away. He also ordered Vasudeva, Krishna’s father, and Ugrasena, Kansa’s father, to be killed without delay. In this way, Kansa tried to bring the situation under his control but it ended up angering Krishna even further.

Krishna jumped onto the high dais and tried to strike Kansa. Kansa, who was prepared for Krishna’s attack, defended himself with a sword and a shield. As Kansa swayed his sword, Krishna caught hold of him and knocked off his crown. He dragged Kansa by his hair and threw him down to the wrestling arena. The Lord struck Kansa’s chest with His fists again and again. In this way, Lord Krishna killed Kansa, his maternal uncle. Thereafter Krishna and Balarama immediately freed Vasudeva and Devaki who had been imprisoned by Kansa for so long. Although Krishna touched their feet and offered prayers, Devaki and Vasudeva, being aware of Krishna’s supreme position, did not embrace Him but exhibited their reverence towards Him. 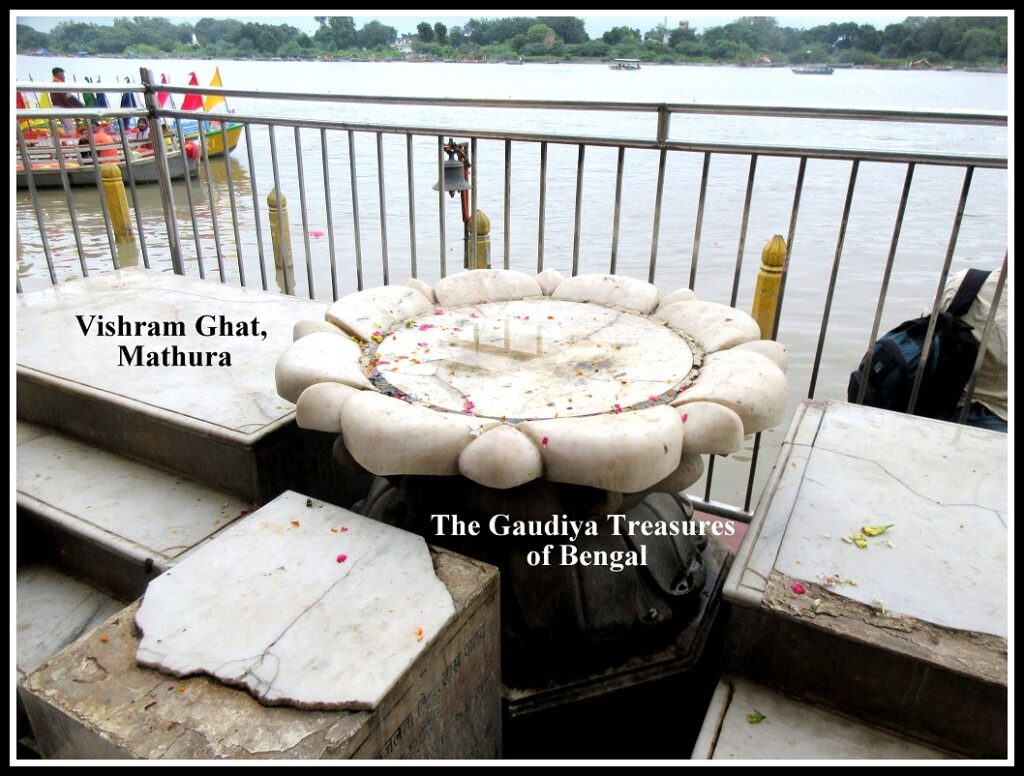 Since Kansa had learned that Krishna will become the cause of his death, he kept thinking about Krishna throughout the day and night. Incessantly plotting to kill Krishna, Kansa could not forget the vision of Krishna holding His wheel. Learned spiritual authorities opine that Kansa attained ‘Sarupya mukti’ (attained the same form as Narayana) after his death, as he helplessly contemplated upon Krishna all the time, although he considered the Lord his arch enemy.

Vishram Ghat is hardly a fifteen minutes ride from the Mathura junction railway station. Buses, rickshaws, and autos are readily available, and you can conveniently reach the Ghat within a short period.