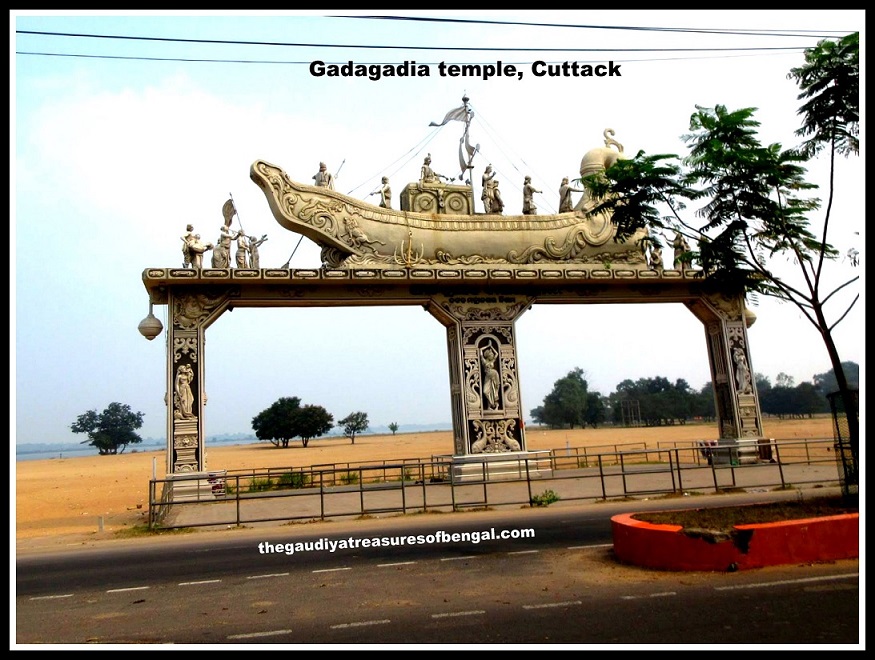 Gadagadia temple, situated on the bank of Mahanadi in the city of Cuttack, is believed to be one of the oldest temples of Orissa. The temple was established by King Pratap Rudra deva around 500 years back. Gadagadia temple happens to be very close to the King’s palace at Barabati fort. During Sri Chaitanya Mahaprabhu’s return to Puri from Vrindavan, He crossed over the river Mahanadi at this point (Gadagadia ghat). It is considered that the Gajapati emperor of Odisha, Pratap Rudra Dev, received Chaitanya Mahaprabhu at the Gadagadia Ghat. Later the King arranged for Lord Chaitanya’s stay at this place. Gadagadia temple commemorates this ancient exalted pastime. The temple compound exhibits the footprints of Lord Chaitanya and the tree under which the Lord once sat. Sri Chaitanya is believed to have taken a bath in Mahanadi on the full moon day of Kartika and to have then rested on the sands of the river bed. In his state of divine ecstasy, He rolled on the sands of the Ghat. In Odia, rolling is translated as ‘gadiba’, and the place came to be later known as Gadagadia. 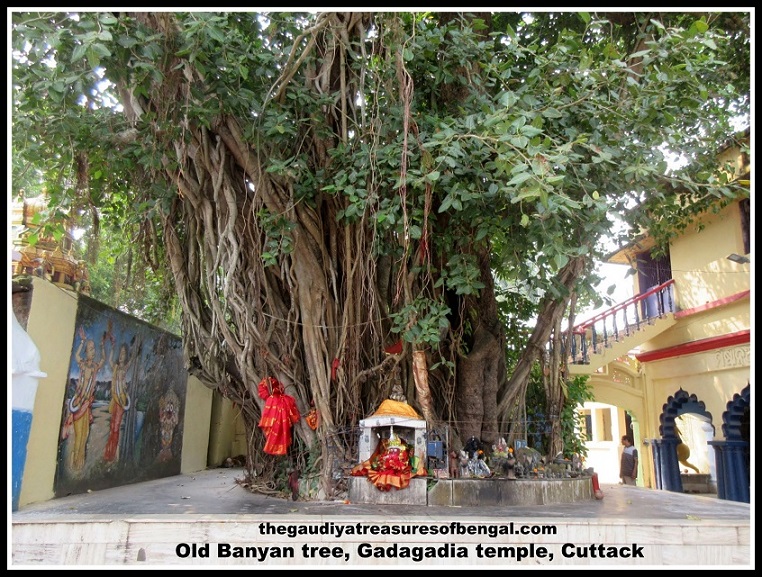 The temple’s connection with the annual Bali Yatra is a legend firmly believed by the locals. There is a widespread belief that the Bali Yatra is held in commemoration of the ancient trade relations between the merchants of Orissa and those of Bali (Indonesia). The ships carrying merchandise from Orissa would sail out for Bali on the auspicious day of the Kartika Purnima. They would return with riches and accounts of adventure. The wives and families of these ancient mariners would gather at the Gadagadia ghat to welcome their husbands on their return.

Gadagadia temple – There is a 500-year-old Banyan tree inside the Gadagadia temple complex. This is the tree under which Lord Chaitanya had once rested. The main temple has many subsidiary temples in the precinct. There are smaller temples of Kali, Laxmi, Jagannath, Sri Ram, and a statue of the old Mahant. A black chlorite stone block with the foot impressions of Sri Chaitanya Mahaprabhu is preserved near the entrance. There are also small deities of Gaura Nitai who are worshiped in this temple compound. The temple also maintains a small Goshala in the rear. The main entrance has a decorative arch that is adorned with a multitude of floral and animal motifs. 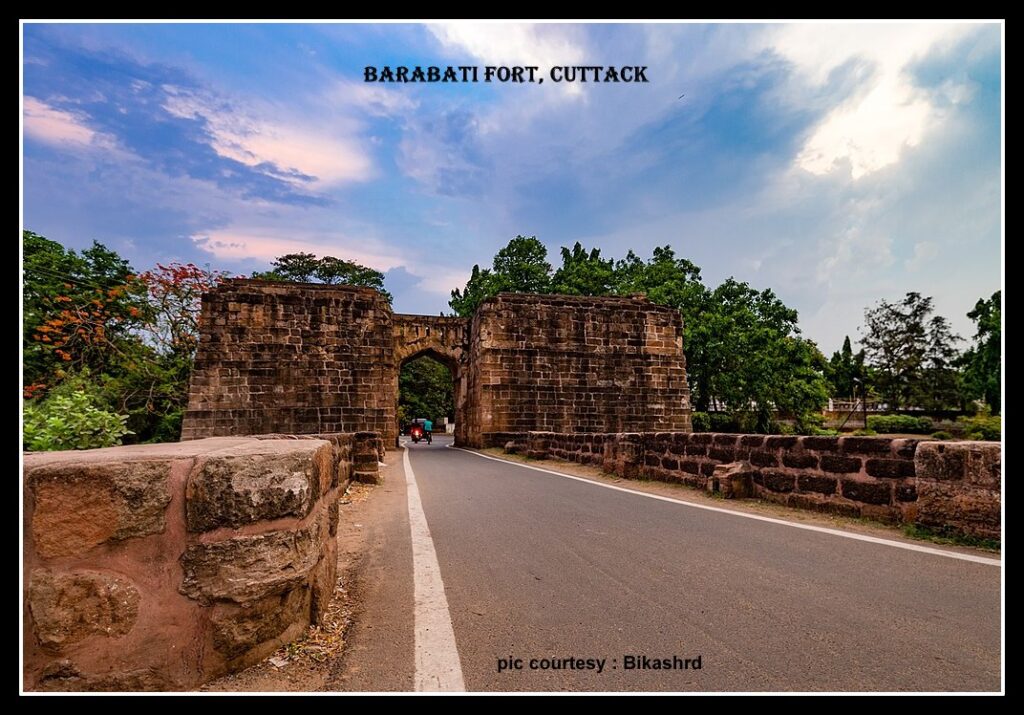 Barabati fort – Not far from Gadagadia temple is the ancient Barabati fort. The Barabati Fort, today, is only a mere shadow of its glorious past. The standing structure presently includes an arched gateway, a moat, a central mound with architectural remains. The ruins attest to the existence of a grand fort in the past.

Gadagadia temple is well renowned and one can avail cabs to directly reach this place. Gadagadia temple is situated on the bank of river Mahanadi, near Buxi Bazar, Killa Fort ground, Cuttack, Orissa. The place comes under the jurisdiction of the Cantonment Police station. 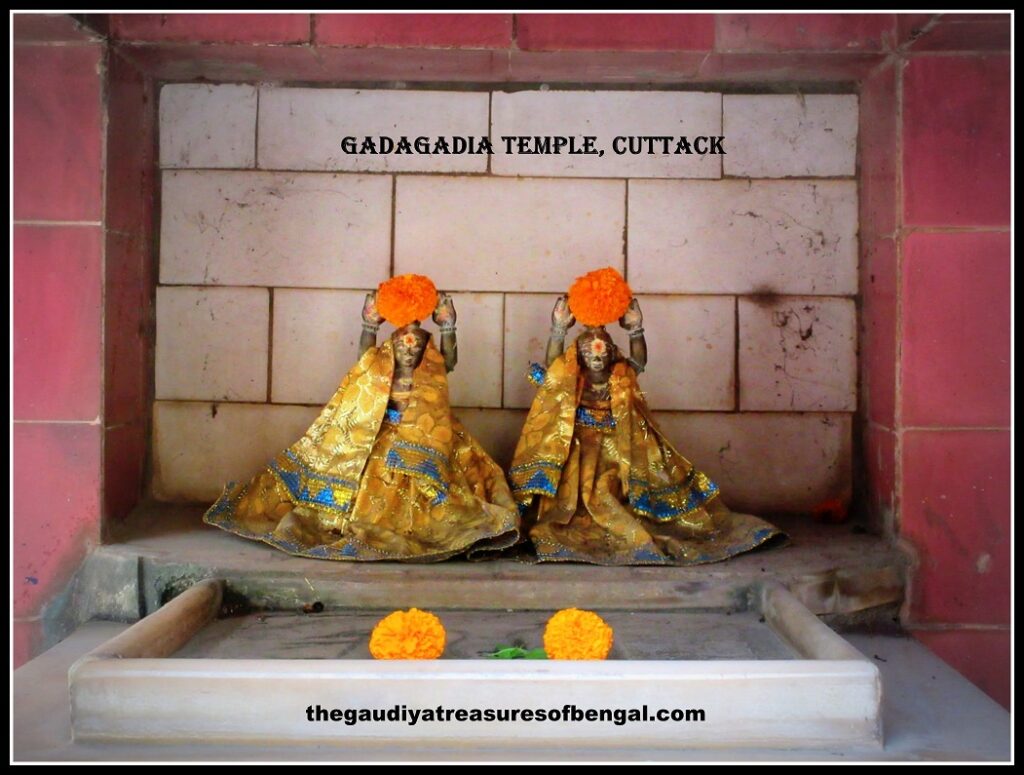 Accommodation – One can choose to stay in any of the prominent hotels of Cuttack.