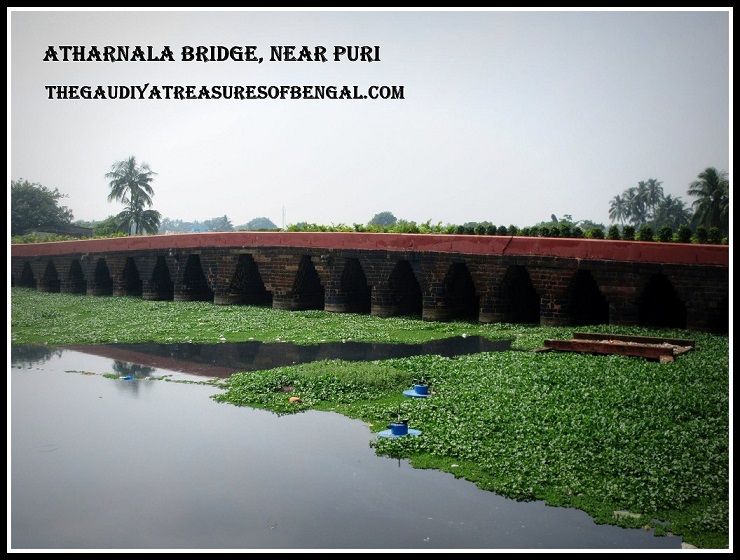 Atharnala Bridge is a marvel of medieval Orissan architecture. This historic laterite stone bridge was constructed by King Bhanu Dev of the Ganga dynasty in the thirteenth century. It is a combination of two words – ‘Athar’ which denotes ‘Eighteen’ and ‘Nala’ which signifies ‘Passage’. Hence ‘Atharnala’ literally translates to ‘eighteen passages’. The original bridge is said to have been constructed by King Indradyumna in Satya Yuga. He was initially unsuccessful when he commenced construction. But later he offered the head of his eighteen sons to the river. Only then he was successful in building the bridge. This bridge is situated on the Musa River at the entry point of the city of Puri. Local people refer to it as the ‘Hulhuliya Bridge’.

The temple of Lord Jagannath in Puri is visible from the Atharnala bridge. Sri Chaitanya Mahaprabhu had entered the town of Puri through Atharnala. During the time of Lord Chaitanya, the devotees from Bengal would come every year to meet with Sri Chaitanya. Reaching Atharnala, they would first of all bow down and offer their obeisances to Lord Jagannath whose temple could be glimpsed from Atharnala.

It is described in Chaitanya bhagavata how the devotees headed by Advaita Acharya once met with Sri Chaitanya Mahaprabhu at Atharnala. Lord Chaitanya had personally come to receive these devotees. Delighted to see the Lord, all the devotees paid their prostrated obeisances.

The eight ecstatic symptoms became simultaneously manifested in their bodies. Losing themselves with joyous ecstasy, some of the devotees burst into tears while others raised loud chants of Harinama. Lord Chaitanya lifted Advaita Prabhu on His lap and showered His body with tears of divine love. Advaita Acharya forgot about all the paraphernalia He had brought to worship Lord Chaitanya. In a fit of jubilation, He roared, ‘I have brought the Supreme Lord, I have brought the Supreme Lord’. 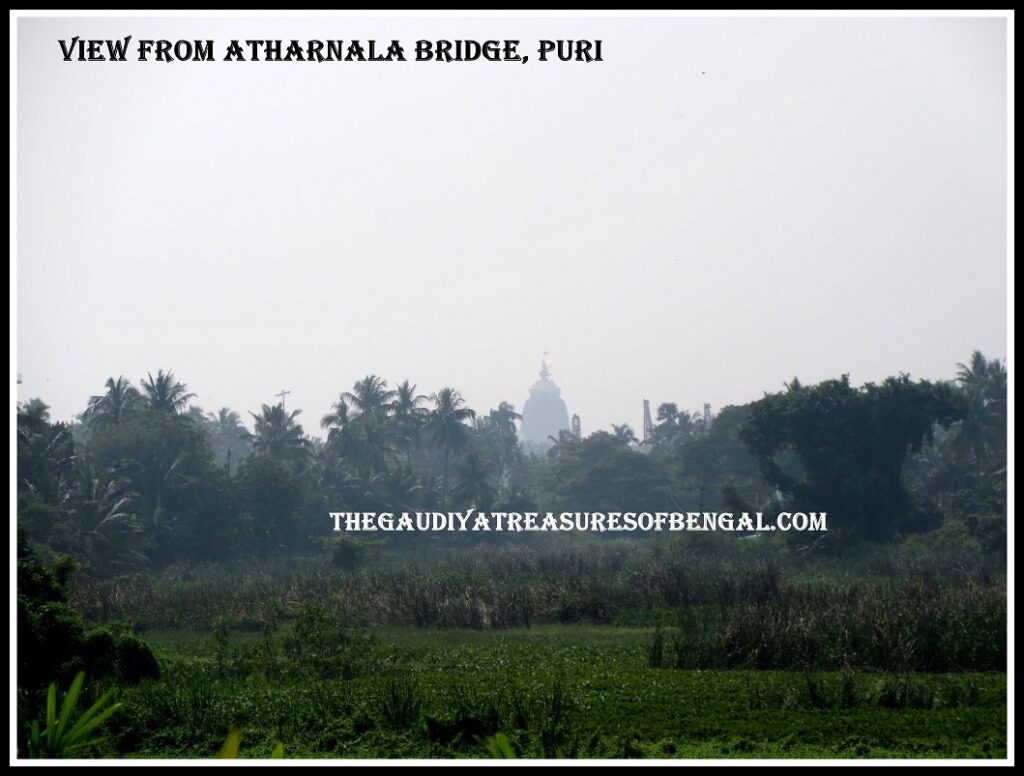 The devotees embraced each other and then exploded into loud Harinama sankirtana. Some danced, some sang while others rolled on the ground. Thereafter Lord Chaitanya welcomed all the devotees with garlands and sandalwood paste. The devotees then prayed for the following –

Janma janma yeno prabhu
Toma na pashori
Ki manusya, ki pashu, pakshi hai yatha tatha
Tomara charan yeno dekhi e sarvatha
(Chaitanya Bhagavata, Aunty, 8.93)
–
Life after life, may we never forget you O Lord Chaitanya. We do not care if we are born as humans, animals or birds. But please bless us so that we can see your lotus feet everywhere, O Lord.

This historic laterite stone bridge is situated at the entrance to the city of Puri, over the Madhupur or Musa stream. It is situated on the Puri-Bhubaneswar road at a distance of about 2.5 Kms from the Jagannath Puri temple. Atharnala is quite renowned and one can avail cabs to reach here directly.