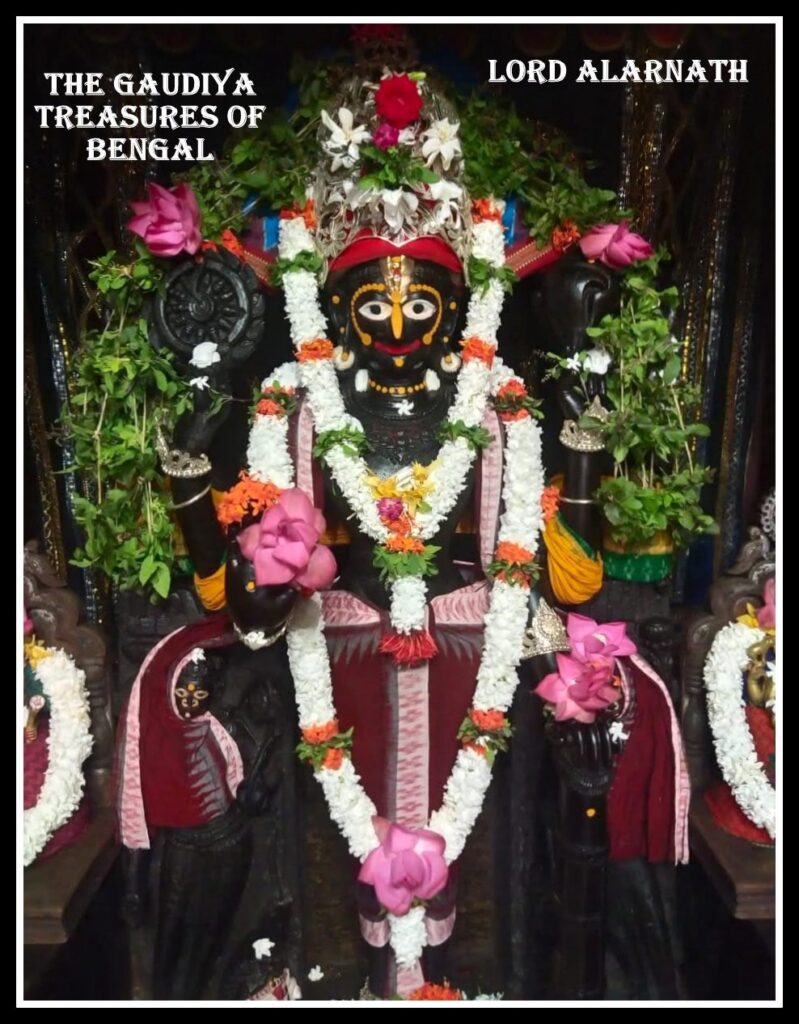 Alarnath, also known as Brahmagiri, is situated about 25 Kilometers from Jagannath Puri. The history of this place dates back to Satya Yuga when Brahma worshiped Lord Vishnu here at the top of this hill. Being satisfied with Lord Brahma, Lord Vishnu appeared and instructed him to carve His four-handed deity form out of black stone. Lord Vishnu also added that the place would come to be known as Brahmagiri as Lord Brahma had worshiped the Supreme Lord at that place. The present temple was built by King Madan Mahadeva about eleven hundred years ago and the worship was previously performed by South Indian Brahmins. Because the priests were in the disciplic line of the great spiritual teachers known as the Alvars, the deity became known as Alvarnatha (“Lord of the Alvars”), which in time became Alarnath.

Anavasara is the time after snan yatra (bathing ceremony) when Lord Jagannath cannot be seen in the temple, as He apparently gets sick. Actually, during this period renovations are done on the body of the Jagannatha Deity. This is also called nava-yauvana. Lord Jagannath appears in public again at the time of Rath Yatra. Thus for fifteen days after the bathing ceremony, Lord Jagannath does not give His darshan. So it was during this time of Anavasara,  five hundred years ago, that Sri Chaitanya Mahaprabhu used to visit the Alarnath temple. He could not tolerate His separation from His beloved Jagannath and would visit the Alarnath temple during these times. Once Chaitanya Mahaprabhu entered the Alarnatha temple and fell flat on the ground before Lord Alarnath. His love for the Lord was so intense that when He lay on the stone floor in an ecstatic trance, the stone melted like butter to capture the impressions of His head, chest, arms, and legs. These impressions are still visible on the stone slab to this day. The stone is known as Prema Sila and is worshiped within the temple premises.

There is a fascinating pastime of Lord Alarnatha who had accepted food offerings from an innocent boy named Madhu. Long ago, there was a priest by the name of Ketana who had a son named Madhu. Once Ketana had to go out of the Alarnath temple for some days and so he asked his son Madhu to offer food to Lord Alarnath while he was away. Young Madhu expressed his inability to do so as he did not know any mantras to make the food offering. Ketana advised him to simply place the plate of food in front of the Deity and pray so that He accepts the offering. 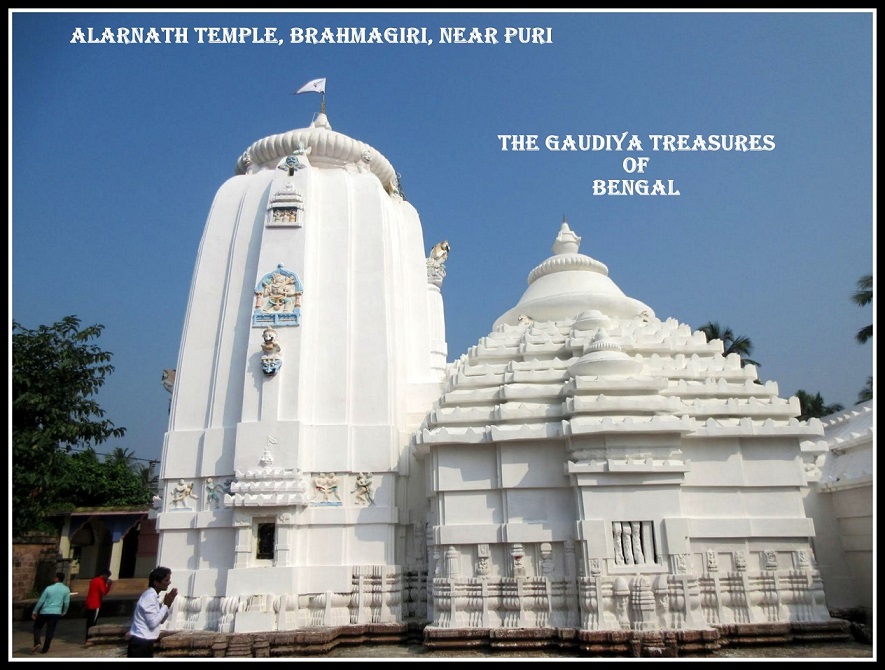 On the first day, Madhu offered food to the deity and went out to play with his friends. On returning he found the plate with its food intact. Madhu did not know that the omnipotent Lord could accept the offering by His mere glancing over it. He became morose and requested the deity again and again to accept the food. The second time, he came back and was greatly disappointed to find that the food was left untouched by the Lord once again. He then began to cry and prayed to the Lord, “I am a small boy and I don’t know the proper mantras to offer the food. But my father has asked me to make the offering. If you don’t accept the food, my father will be furious with me. Please accept it.” Madhu went out again and this time, on returning, he found the plates to be empty. When his mother inquired, Madhu replied that the deity had eaten all the food. This continued for three days and the family had to fast during this period.

Ketana returned after three days to find his family fasting. He learned from his son Madhu that the deity had been eating all the offerings. However, he had no faith in the deity and considered it only to be a product of stone. He thought that his son must have eaten the food and was now lying to hide the truth. He wanted to find out the truth and asked his son to offer the food that day, the same way as he had done before. 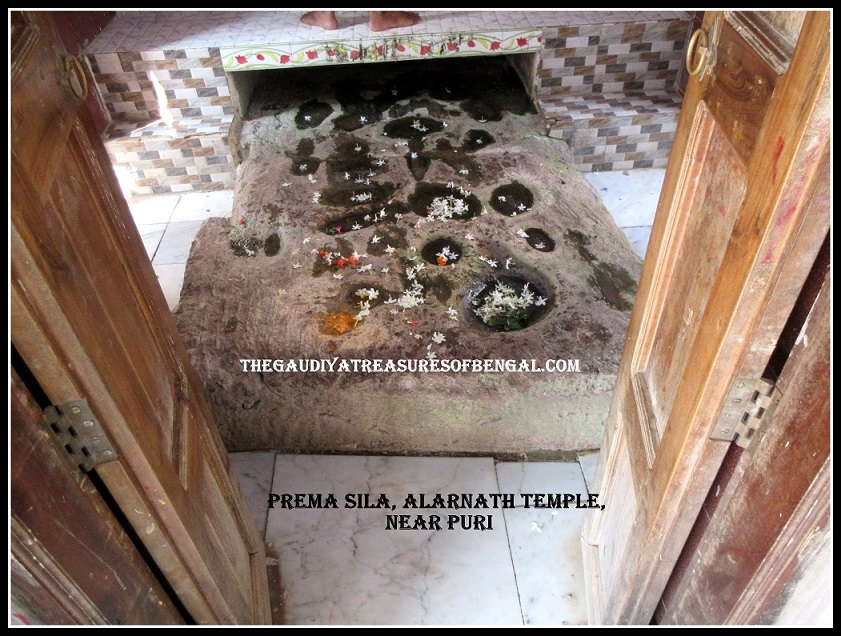 Accompanied by his father, Madhu went in front of the Deity and placed the food as usual. He prayed to the Lord to accept it and then went out. Ketana who was hiding at the altar saw that Lord Alarnatha was personally taking a cup of sweet rice. Ketan then rushed to grab the Lord’s arm so as to prevent Him from eating the offering. In the process, the hot sweet rice spilled from the cup and fell on the Lord’s body. He asked the Lord how he could eat all the offerings as he had never heard of a deity that actually eats and talks. Ketana added that they will have to fast if the Lord ate all the offerings. The Lord then declared that He was pleased by Madhu’s simple devotion but is never pleased with any offering, no matter how opulent, if it lacks love or if it is made by a materialistic, faithless person. The burnt marks on Lord Alarnath’s body caused by the scalding of the sweet rice can be seen to this day.

Alarnath is situated at Brahmagiri near Puri in the Indian state of Orissa. It is approximately a 25 Kilometers drive from Jagannath Puri. Alarnath temple is quite renowned and one can avail cabs to reach here directly. 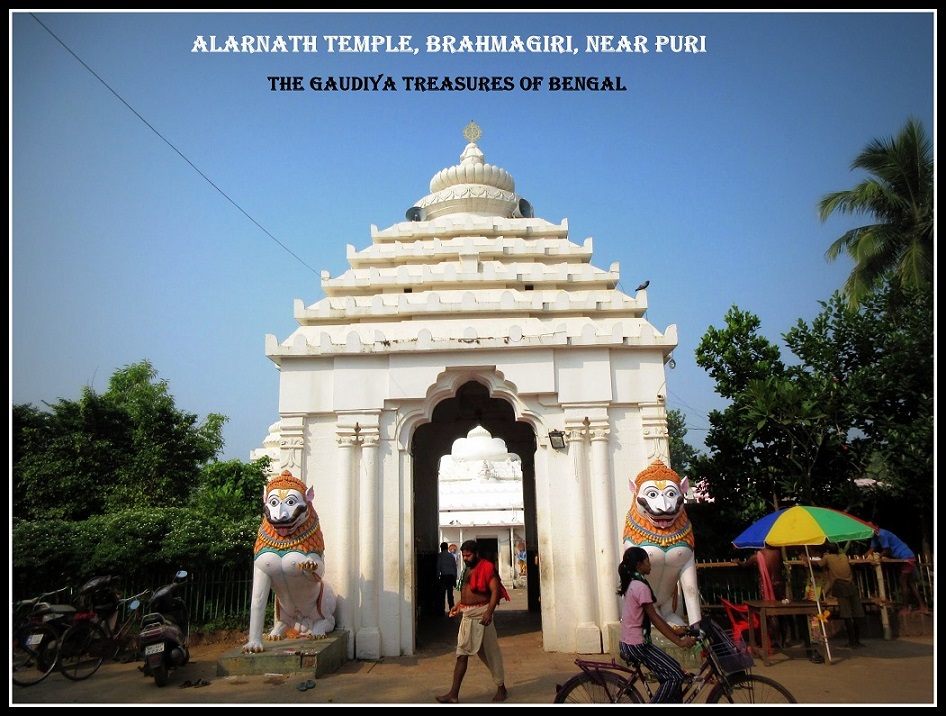