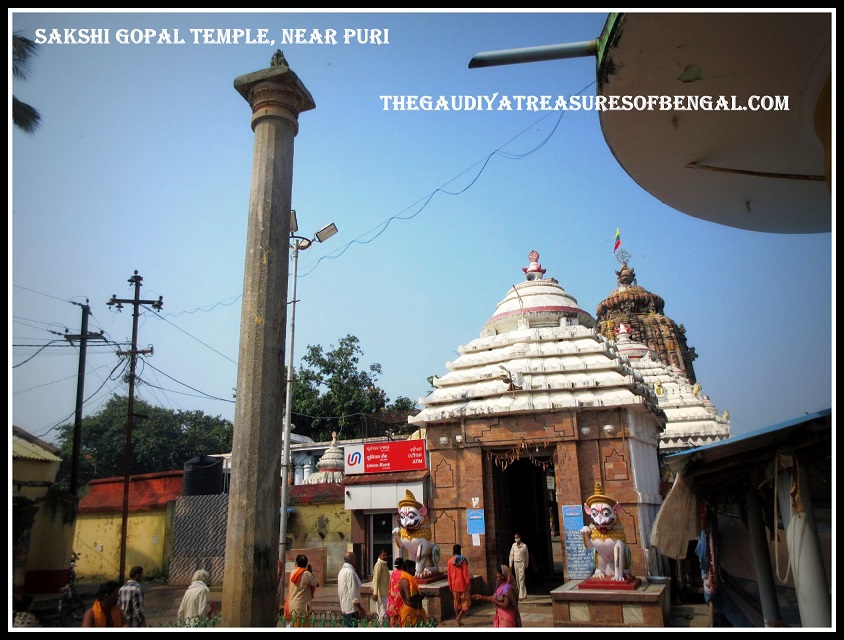 When Sri Chaitanya Mahaprabhu reached the town of Cuttack, He went to visit the temple of Sakshi Gopal. While there, Nityananda Prabhu narrated to Him the story of the enchanting deity. Once, there were two brahmanas who were residents of the town of Vidyanagar. One of them was elderly while the other was young. The two brahmanas made an extensive tour to see different places of pilgrimage. After visiting Gaya, Kasi and Prayag, they finally reached Mathura. Thereafter they saw Govardhan hill, the twelve forests, and finally arrived at Vrindavan. In the village of Panchakroshi in Vrindavan, there was a great temple where gorgeous worship of Gopal was conducted. After taking baths at the different bathing places across the Yamuna, such as Kesi Ghat, Kaliya Ghat, the two pilgrims visited the temple of Gopal. The beauty of Gopal enchanted their minds. They stayed for a few days. Later the older brahmana, being impressed with services rendered by the young one, promised to give him his daughter in marriage. The young brahmana was taken by surprise and exclaimed that such an arrangement was unusual as the elderly brahmana belonged to a rich aristocratic family while he, on the other hand, was without a decent education or wealth. Hence he requested the elderly brahmana to reconsider his words as the young brahmana was not a suitable bridegroom for his daughter. The young brahmana also warned the elderly brahmana that he had a large circle of family and relatives whom he should discuss before concluding. However, the elderly brahmana remained stubborn. He insisted that the young brahmana should accept his proposal. Thereafter, at the request of the young brahmana, the elderly brahmana promised in front of the deity of Sakshi Gopal, that he would give him his daughter in charity.

After concluding their pilgrimage, the brahmanas returned to their respective homes in Vidyanagar. After some time, the elderly brahmana felt worried. He called a gathering of his family and relatives and recounted the promise he had made to the young brahmana. His family was shocked to learn that the elderly brahmana had promised to give away his daughter in marriage to an unsuitable person who neither had wealth nor nobility. They threatened to cut off their ties with the elderly brahmana if he sought this marriage. Some of the family members even exclaimed that they would drink poison and die. The elderly brahmana was in a fix. He did not want to break the promise he had made before Gopal. On the other hand, he was also frightened of his kinsmen. He prayed to Gopal so that the situation could be settled. 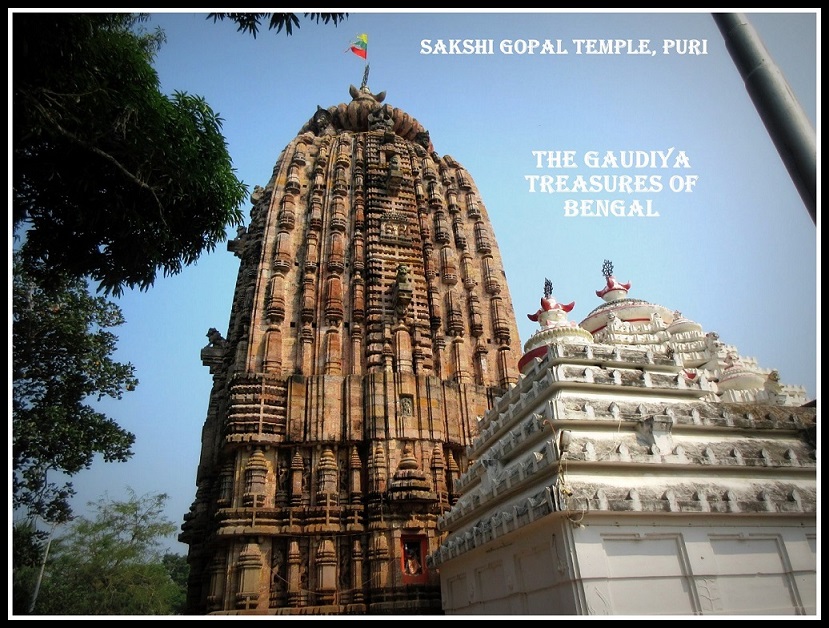 The young brahmana hence started for Vrindavan. Upon arriving there, he first offered his respectful obeisances to the Deity and then related everything. The brahmana requested Gopal to come with him and be a witness to his case. Lord Krishna initially refused and asked the brahmana to simply remember Him at the meeting. But the brahmana replied, “My dear sir, even if You appear there (in the meeting) as a four-handed Vishnu Deity, still, none of those people will believe in Your words. Only if You go there in this form of Gopal and speak the words from Your beautiful face will Your testimony be accepted by all people”.  On being requested again and again, Lord Krishna finally agreed to accompany the brahmana. But the Lord warned the brahmana that he should not turn his back and notice the deity following him. Otherwise, the deity would not move any further and remain stationary at that place. The brahmana was also asked to cook one Kilo of rice daily and offer it to the deity. 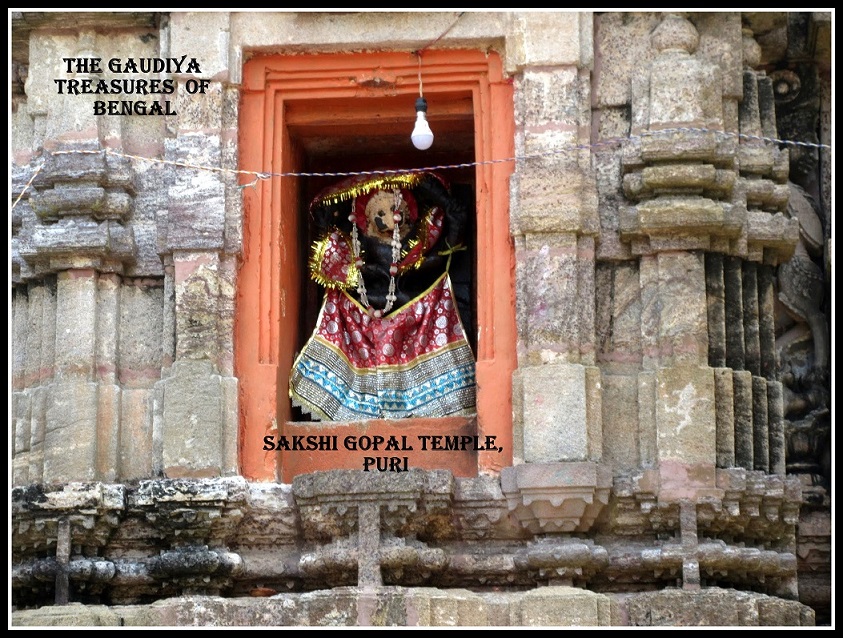 The next day, the brahmana begged permission from Gopal and started for Vidyanagar. Gopal followed the young brahmana, and the brahmana was reassured hearing the tinkling sound of the deity’s ankle bells. The brahmana walked until he finally reached his village. Reaching the outskirts of his neighborhood, he looked behind to see if the deity was really there. As soon as he turned, the deity became stationary and would move no further. The young brahmana then summoned all the villagers. The villagers were enchanted by the beauty of Gopal and seeing that He had actually walked all the way from Vrindavan, they became very surprised. In the presence of all the townspeople, Lord Gopal then bore witness that the elderly brāhmaṇa had indeed offered his daughter in charity to the young brahmana. Soon the marriage ceremony was performed. The Lord informed both the brahmanas that they were His eternal servants. At their request, Gopal jiu stayed back at Vidyanagar. In course of time, the King constructed a nice temple to house the deity, and regular service was executed. Gopal became famous as Sakshi Gopal (witness Gopal) as He had borne witness to the words of the young brahmana. Sakshi Gopal stayed at Vidyanagar and accepted service for a long time. Later King Purusottama deva of Orissa was victorious over the King of Vidyanagar and took possession of Sakshi Gopal and installed Him near Jagannath Puri. The deity has been residing here ever since.

Sakshi Gopal Temple is a medieval temple dedicated to Lord Krishna and is located in the town of Sakshigopal on the Puri Bhubaneshwar highway in Orissa. The temple possesses a Kalinga Architectural style. The temple is quite renowned and one can avail cabs to reach here directly.