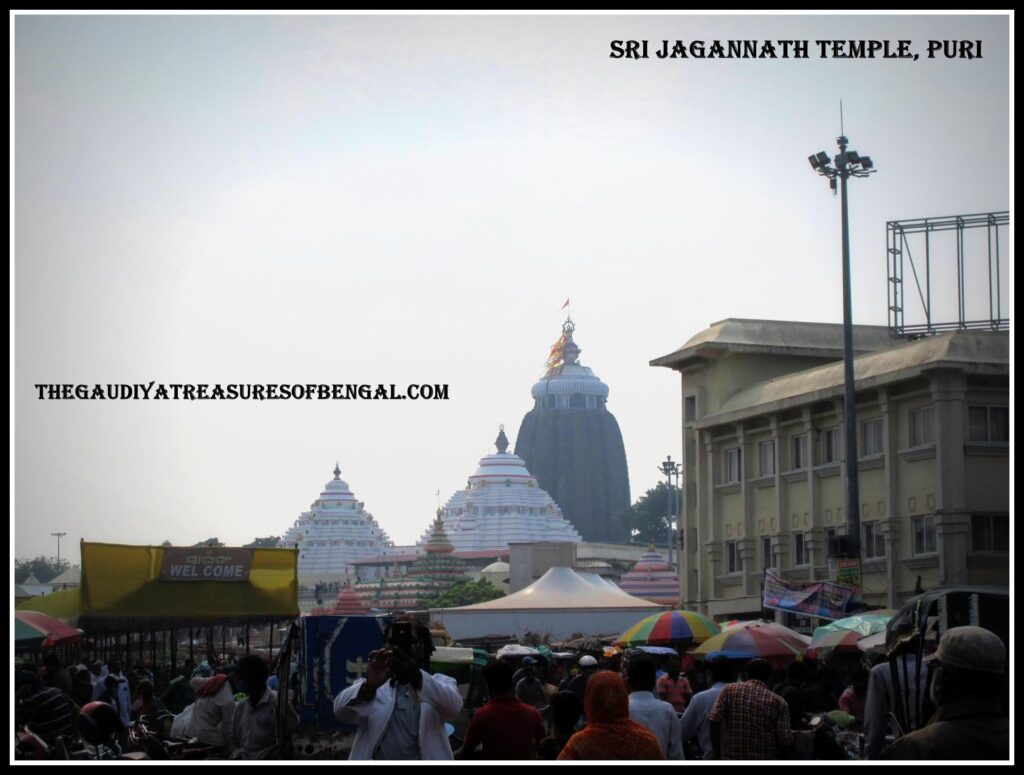 Jagannath temple, Puri is located about 60kms from Bhubaneswar, on the coast of the Bay Of Bengal, in the state of Orissa, India. Jagannath Puri is addressed by various names. Some of these names are Sri Kshetra, Purushottama kshetra, Nilachala dham, Jagannath dham, Samanik tirtha, Uddiyan pith, Marta-Vaikuntha, Nilgiri, Niladri, Sankha kshetra, Bhu-svarga, and Nrsimha kshetra. Jagannath Puri is one of the most prominent spiritual sites of India (Bharat). It is said that the Supreme Lord bathes at Badrinath (situated in North India), He changes His clothes at Dwarka (situated in West India), accepts His food at Jagannath Puri (situated in East India), and then proceeds to take rest at Rameshwaram (situated in South India). Here at Jagannath Puri, the Supreme Lord resides in His deity form. Anyone who takes His darsana attains liberation from this material world. By visiting Jagannath Puri, one attains the pious credit of visiting all the other places of pilgrimage. Puri is about 2 km wide and 4 km long.

The word “Jagannath” stands for “Lord of the Universe”. King Indradyumna had established this temple of Lord Jagannath here on the Nilachal hill. We have narrated the relevant pastimes concerning the history of the Jagannath temple Puri in our previous articles. The present temple was built in the 12th century atop its ruins by the progenitor of the Eastern Ganga dynasty, King Anantavarman Chodaganga Deva.

The structure of Jagannath Temple, Puri is an architectural and cultural wonder. It is about 65 meters in height and is built upon elevated ground, which makes it look imposing. The temple complex comprises an area of approximately 10.7 acres and is enclosed by 2 rectangular walls. The outer enclosure is called ‘Meghanada Prachira’ measuring approximately 200m (665 ft) by 192m (640 ft). The inner wall is called ‘Kurma bheda’, measuring 126m (420 ft) by 95m (315 ft) approximately. These walls were built during the 15th or 16th centuries. Thirty different smaller temples surround the main temple. The Lord Narasimha temple adjacent to the western side of the Mukti-Mandapa was built before the present temple. In front of the main gate (Simha Dwara) is an 11 m pillar known as Aruna Sthambha. This pillar was once in front of the Sun Temple in Konark. It was bought to puri during the 18th Century. The figure on the pillar is Aruna, the charioteer of the Sun God. 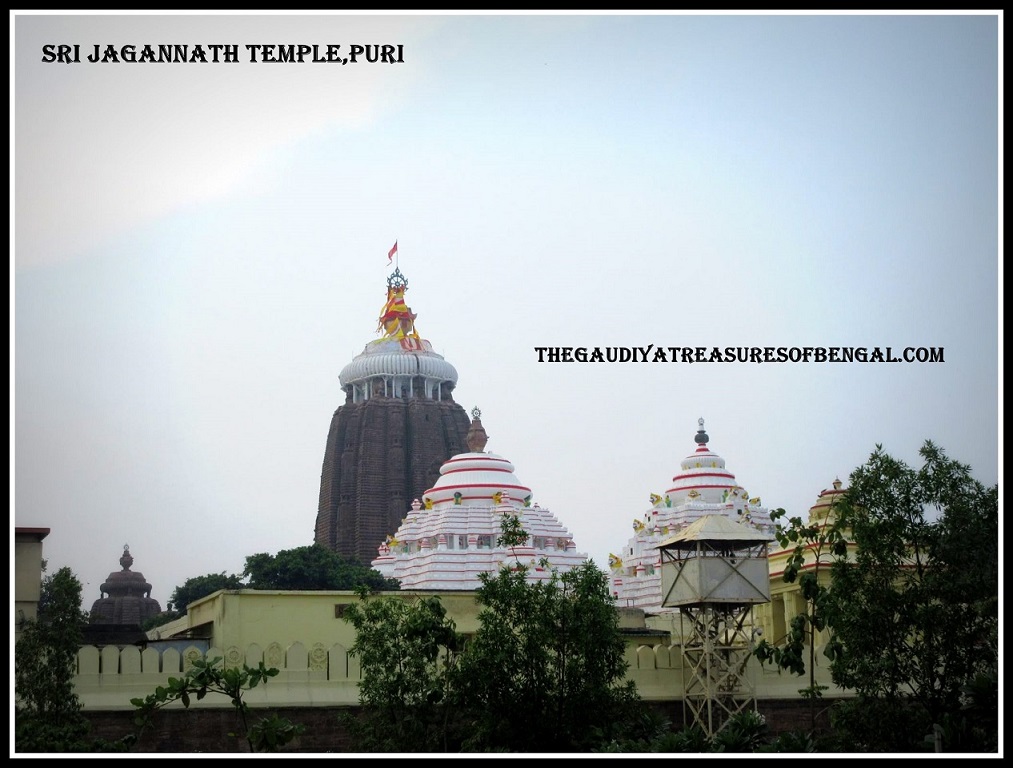 36 traditional communities render a specific hereditary service unto the Deities of Jagannath temple, Puri. The temple has as many as 6000 priests. There is a wheel on the top of the Jagannath temple made of an alloy of 8 metals. It is called Nila-Chakra (blue wheel). The circumference of the Nila-chakra is 11m and its height is 3.5m. Every day a different flag is tied to a mast attached to the Nila-Chakra. Every Ekadashi a lamp is lit on the top of the temple near the wheel. The Nila Chakra disc atop the Jagannath Temple has eight Navagunjaras carved on the outer circumference, with all facing towards the flag post above. The flag hoisted on the Nila-chakra is called Patita Pavana (Purifier of the fallen) and is considered non-different from the deities inside the temple.

There are 4 entrance gates of Jagannath Temple, Puri :

By the entrance of each gate there is a carving depicting each form. The Lion Gate situated on the Grand Road is the main gate of the temple. A deity of Lord Jagannath also known as ‘Patita Pavana’ is seeable from the entrance door to the Grand road, so that non-Hindus may take His Darshan. Immediately after we get through the main gate (Simha Dwara) and proceed forward, we shall find a flight of 22 steps leading to the main temple. Locally, they are called Baisi Pahacha, which means, twenty-two steps. Climbing these steps are considered to be auspicious and spiritually rejuvenating. These steps are believed to take away one’s sins and award religious merit. On the left-hand side, there exists a vast kitchen area. Jagannath Temple, Puri hosts the largest kitchen in the world and feeds thousands of devotees daily. The kitchen can prepare food for 1,00,000 people on a festival day and 25,000 is not unusual on a normal day.  The method of food preparation is most hygienic and the traditional process of preparation of food for so many people in such a short time takes many by surprise. To the right, we have the Anandabazar which is the popular name of the food selling market within the temple enclosure. Anandabazar literally translates to ‘ a blissful market’.

The main deities of the temple namely Lord Jagannath, Lord Baladeva, and Subhadra Devi reside on the main shikhara or tower that rises above the inner sanctum. Above the ante-halls, some supplementary towers can be seen. The wall surrounding the temple complex has a gopura or gate over which rises a pyramid-shaped roof. Some of the other temples within the compound house deities of Sri Chaitanya Mahaprabhu, Lord Rama Chandra, Sakshi Gopal, Hanuman, Lord Narasimha, Lord Varaha, Lakshmi devi, and others. Vimala devi, a form of Goddess Durga, is also worshiped in one of the smaller temples within the compound. The food offered to Lord Jagannath is first of all brought before goddess Vimala and offered to her. The food then becomes Mahaprasad. 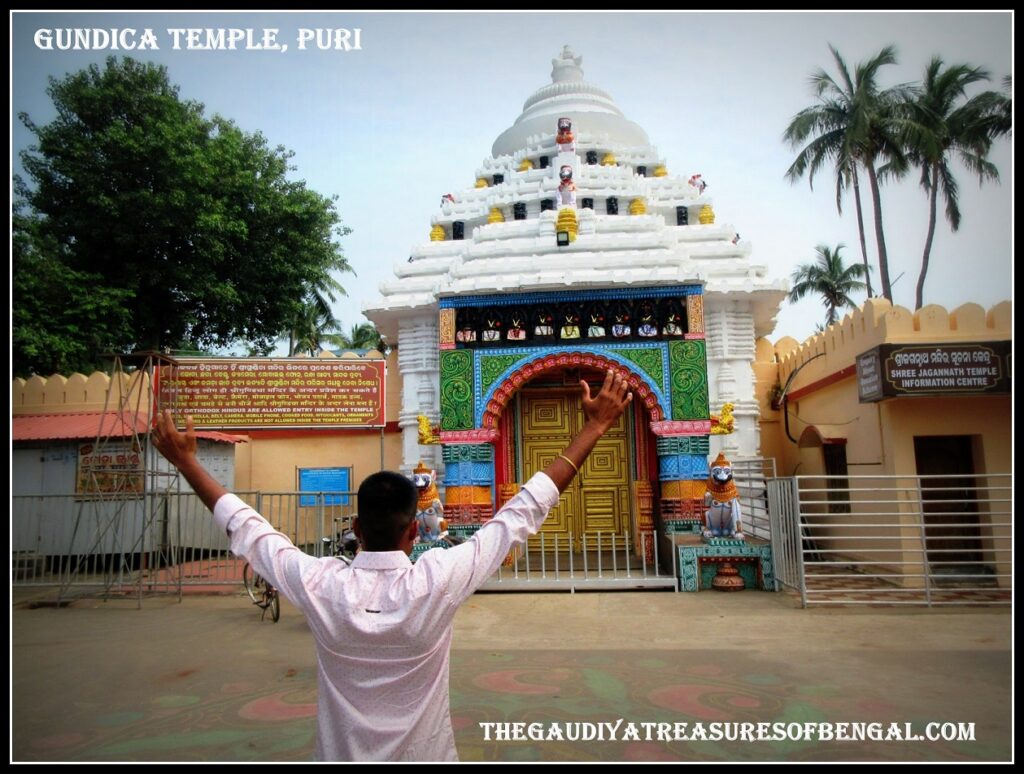 This Mahaprasad is freely partaken by people of all castes and creeds without any discrimination. The items offered include cooked rice, dal, vegetable curry, sweet-dishes, cakes etc. Dry confectioneries are prepared of sugar, gur (molasses), wheat flour, ghee, milk and cheese (Chenna) etc. Many rituals are performed in the Jagannath temple and the Mahalaxmi Temple, located in the same compound, plays an important role because the preparation of the food (Naivedya) to be offered to Lord Jagannath is supervised by Mahalakshmi.

In Chaitanya Bhagavata, Srila Vrindavan das Thakura quotes from Skanda Purana the conversation between Sri Krishna and Lord Shiva where Lord Krishna recites the glories of Jagannath Puri dham to Lord Shiva. We are presenting the text and translation below for the pleasure of the devotees.

Today I shall apprise you the glories of Sri Puri Dham, My supremely confidential abode.O Shiva, I will personally tell you the glories of Puri today because no one else knows the essence, glories, and the truth of Puri Dham.
On the shore of the ocean, at the root of a banyan tree, is situated the beautiful Purusottama-kshetra, which is also known as Nilacala.
Even when countless universes are destroyed at the time of total material annihilation (at the end of 100 years of Lord Brahma), the supremely transcendental Sri Jagannatha Puri Dham is not affected or touched in any way.
That place is My eternal home. Every day I eat opulent meals at Jagannath Puri dham.
This personal abode of Mine is 10 yojanas or 80 miles in size. The demigods visualize all the living beings residing in Sri Jagannatha Puri Dham, even the insects, worms, and beasts, to be possessing the four-handed forms of the liberated souls of Vaikuntha. That is why this holy abode of Mine is known as ‘Bhuvanamangala’ or the Abode which purifies the whole world.
Anyone who sleeps in that place obtains the result of meditating in samadhi. Anyone who reclines in that place obtains the result of offering obeisances unto Me. This the Vedas declare.
Simply by wandering in Sri Jagannatha Puri Dham, one achieves the endless results of circumambulating Me, and simply by speaking anything in Puri Dham, one achieves the fruits of directly offering glorious prayers unto Me.

My great devotee Yamaraja, the superintendent of Death, does not have the right to even approach anyone residing in Sri Jagannatha Puri Dham. For everyone there, I personally decide what is pious and what is a sin.

Jagannath Temple, Puri is situated on the Grand Road of the city of Puri. It is renowned all over the world. After arriving at the city of Puri, one can avail cabs to reach here directly. 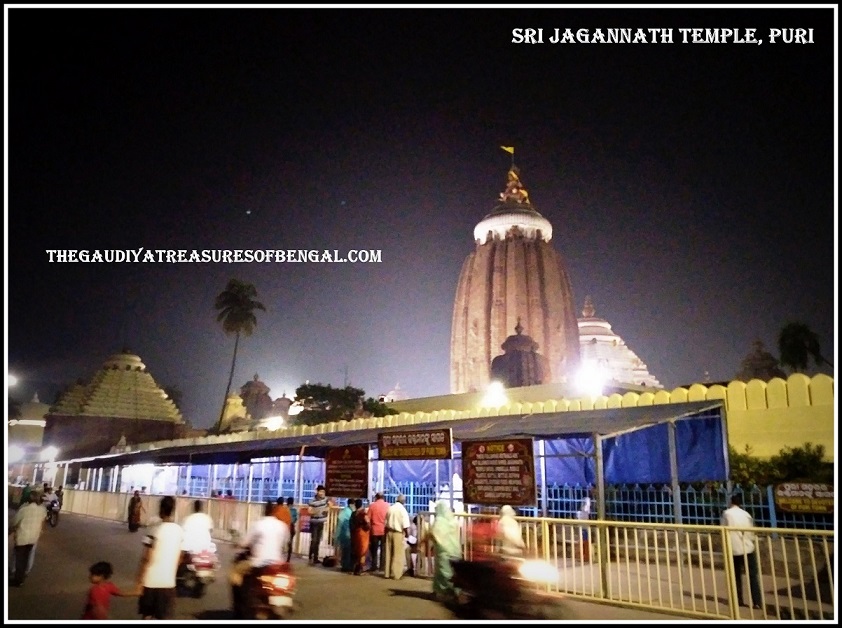