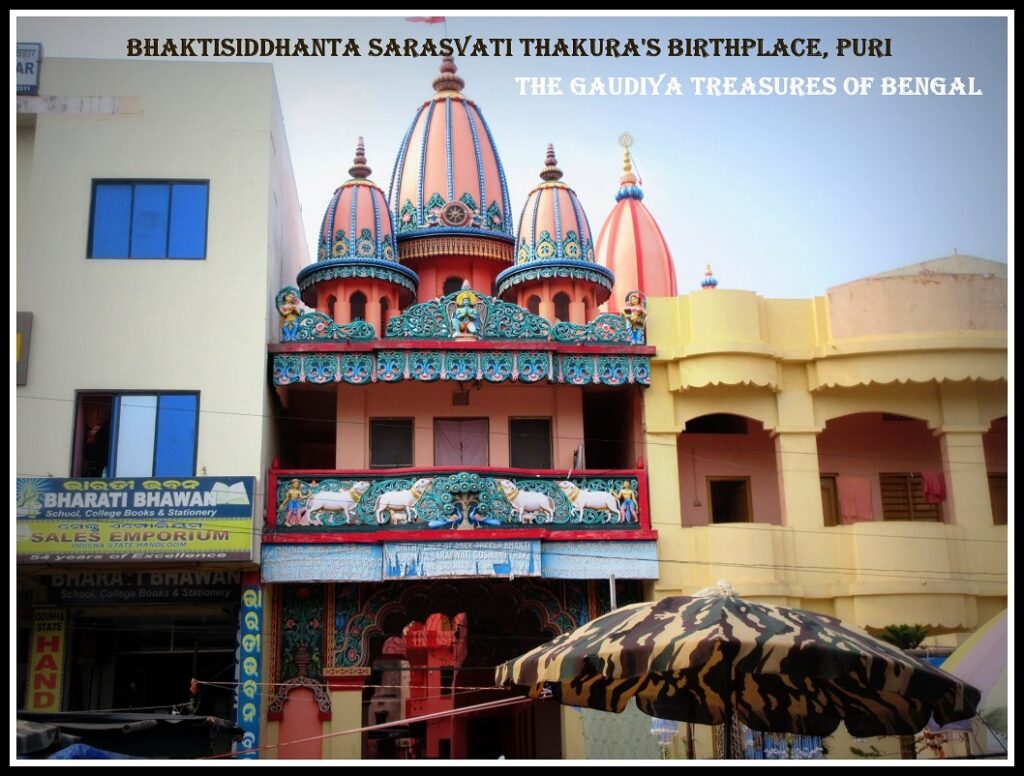 On the 6th of February 1874 AD at 3.30 pm, Bimala prasad Datta (later renowned as Srila Bhaktisiddhanta Sarasvati Thakura) appeared in this world, at a place not very far from the Jagannatha temple in Puri. He was the fourth son of Bhaktivinoda Thakura (Kedarnath Dutta) and Srimati Bhagavati Devi. Srila Bhaktivinoda Thakura, an exalted Vaishnava acharya, was then posted as the regional governor. He was also in charge of the administration of the Jagannath Puri temple. Sri Bimala Prasad Datta exhibited thirty-two bodily symptoms of a great personality, at the time of his birth. He was born with his umbilical cord wrapped around his neck like a Brahmin’s thread, perhaps a sign of his glorious mission. Analyzing his horoscope, a renowned astrologer commented, ‘I have done many horoscopes in my life, but never before have I witnessed a horoscope filled with all the signs of a great personality. This child shall become world-famous as a brilliant teacher of life’s ultimate goal’.

When Bimala Prasada was just six months old, Lord Jagannatha’s Rathayatra cart had halted in front of Srila Bhaktivinoda’s house in Puri for three continuous days. It could not be moved. The cart began moving only after little Bimala was brought before Lord Jagannath. As soon as Bimala came out, a garland fell off from the Lord’s neck and wrapped the child. This was taken as a sign of special favor by the Lord. The child’s grain ceremony was observed on the cart and it was done with Jagannath Maha-Prasad. 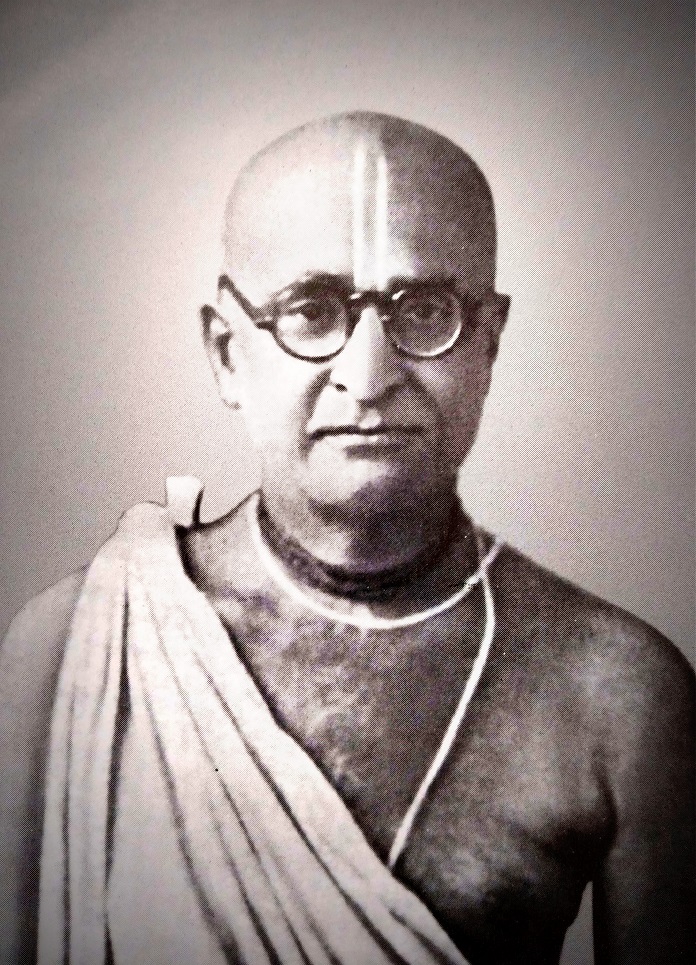 When Bimala’s vocational inclination was tested, the child immediately embraced Srimad Bhagavatam, indicating his future as a great preacher. Therefore since his very birth, Bhaktisiddhanta Sarasvati Thakura exhibited all the signs of an exalted eternal associate of the Supreme Lord who had descended to broadcast the Krishna consciousness movement.

Srila Bhaktisiddhanta’s family lineage traces back to Lord Brahma. He had hailed from the descendants of Chitragupta and his lineage is also identified as Brahma Kayasthas. In the 149th generation, Purusottama, son of Shivadata, moved to Bengal responding to the summons of Adisura, the then King of Bengal. Purusottama’s son took sannyasa and became renowned as Kanaka Dandi. In the seventh and the eighth generations of Purusottama’s family, two personalities named Binayaka and Narayana Datta were both engaged in ministerial work for the King of Bengal. In the fifteenth generation, Raja Krishnananda, the King of Kheturi (Rajshahi, Bangladesh) and the father of Narottama das Thakur (exalted Vaishnava saint) was born. The seventh-generation from King Krishnananda saw the appearance of Madanmohan Datta, who became very well-known in Bengal and Calcutta owing to his spiritual qualities. His great grandson was Anandachandra datta and his son was Srila Bhaktivinoda Thakur. Srila Bhaktisiddhanta Saravati was the fourth son of Bhaktivinoda Thakur. Srila Bhaktisiddhanta was born in Jagannath Puri and stayed here for ten months before journeying to Bengal by palanquin on his mother’s lap.

Srila Bhaktisiddhanta Sarasvati played a major role in debunking the strong rooted influences of casteism and the polluted philosophy of the sahajiyas, which had by then made deep inroads into Indian society. He also took a strong stand against the mayavadis and the atheists. Besides, he did a lot to unify the various Vaishnava sects by stressing upon the agreement shared by the four major Sampradayas ( Brahma, Rudra, Kumara and Sri). In his travels throughout India, he enjoyed the reputation of being a very powerful debater. He was hence awarded with the title ‘Simha Guru’ (Lion Guru). 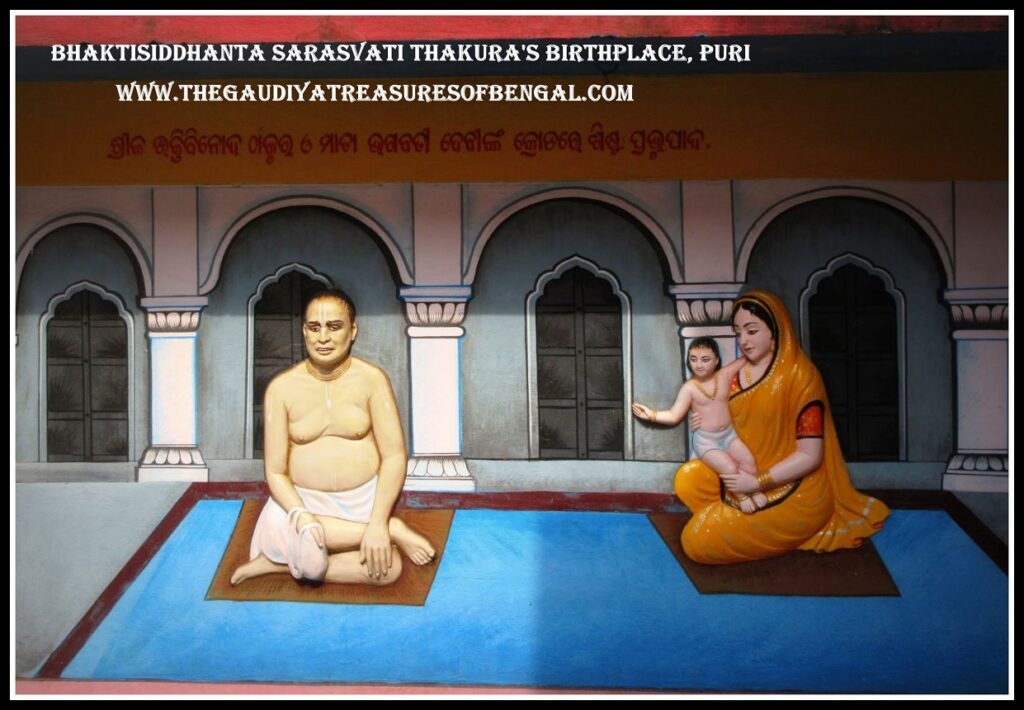 He established 64 temples out of which 17 are located in Navadvipa Mandala (the nine islands of Navadvipa). Few of these were established outside of India as well – like the ones in Rangoon, London and Germany. He was instrumental in printing thousands of books including a daily newspaper called the Nadia Prakash. He owned several printing presses , which regularly printed the following magazines – Sajjana Tosani (English monthly), The Gaudiya (official weekly journal of the Gaudiya Math), The Bhagavata (Hindi), Paramarthi (in Oriya), Kirtana (in Assamese). Apart from his own writing, he also published many other books like – Bhagavad Gita with commentaries of the previous acharyas, Chaitanya Bhagavata with his commentaries, Chaitanya Mangala, Chaitanya Charitamrta, Navadvipa Dhama granthamala, Chaitanya Chandramrta, etc. He established several significant parikramas like the Vraja Mandala Parikrama and the Navadvipa Mandala Parikrama. The erstwhile caste Goswamis (who claim their exalted status on account of taking birth in the lineage of devotees), did not like his growing influence and even threatened him with his life. Srila Bhaktisiddhanta was a living encyclopedia possessing deep knowledge in Sanskrit, Bengali, English, Astronomy, etc. He was well versed with the knowledge of scriptures having devoured and memorized several libraries. He was naturally decorated with all the 26 qualities of a pure devotee.

Srila Bhaktisiddhanta Sarasvati was a revolutionary acharya in many ways. Although Sannyasis traditionally never used any conveniences except for ox carts, he used to ride in motor cars, motorized boats, etc. He also sent out his disciples across the seas in order to preach the glories of the Supreme Lord. He even utilized the radio for broadcasting the message of Godhead. All these innovations, however, were strictly in the mood of preaching and engaging more people in Krishna consciousness. His principle of renunciation (yukta vairagya) was the type described by Srila Rupa Goswami wherein one engages everything (all modern facilities) fully in the service of Sri Krishna.

This place is a few hundred meters walk up the Grand Road towards the Jagannath temple. One can locate the house of Bhaktivinoda Thakura where Srila Bhaktisiddhanta Sarasvati Thakura was born, on his right side. A Chaitanya Math is presently established at this holy site and oversees the dham. There is a signboard above the temple entrance displaying “Birth Place of Prabhupada 108 Srila Bhaktisiddhanta Sarasvati Goswami Thakura”. 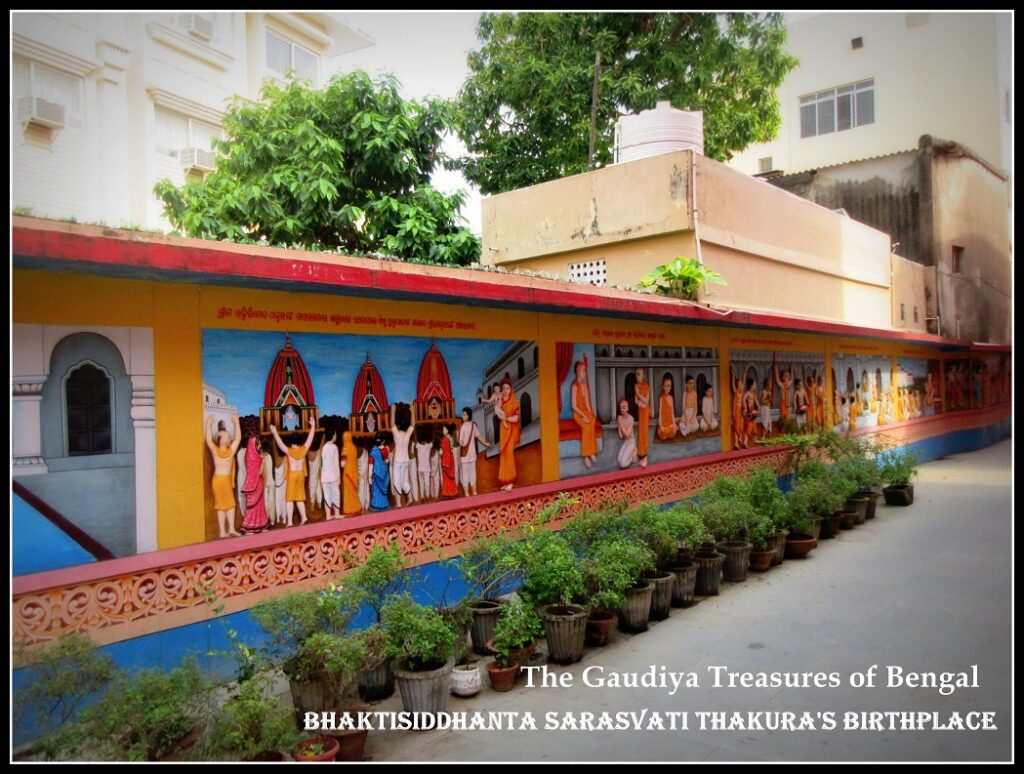