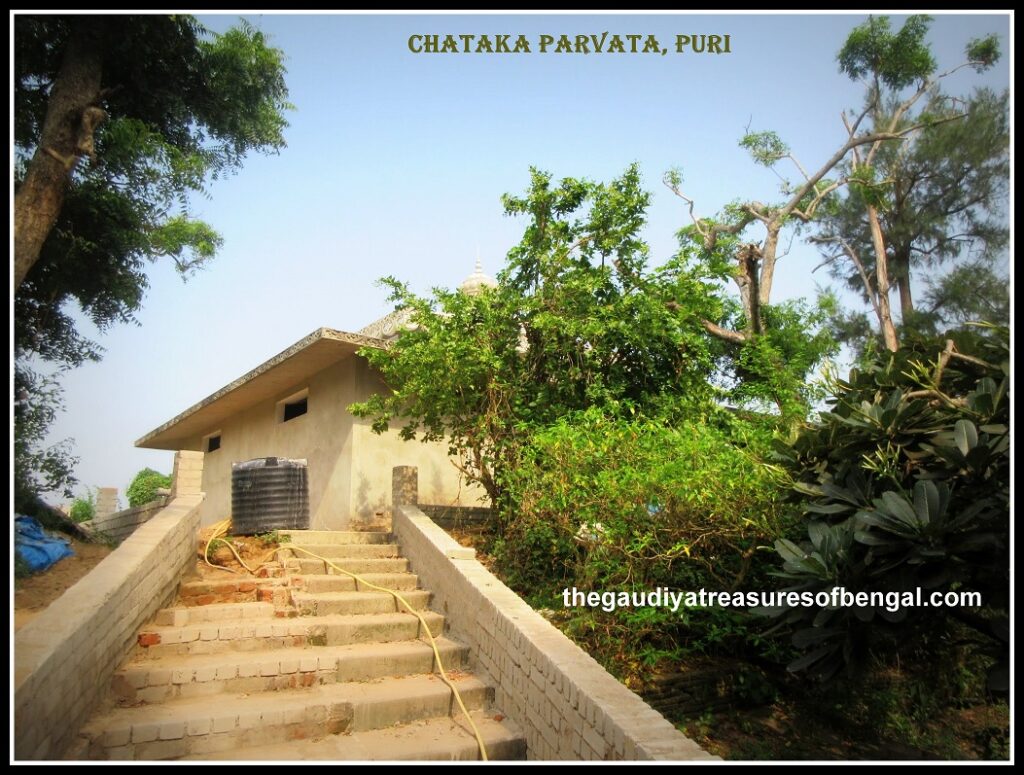 The Chataka Parvata is a sand dune located near the temple of Tota Gopinath, in the Gourbatsahi area of Jagannath Puri. After His sannyasa, Sri Chaitanya had shifted to Jagannath Puri from Bengal about 500 years ago. On one occasion, while He was going to take a bath in the sea, He mistook this sand dune to be Giri Govardhan of Vrindavan, the sacred hill renowned for Krishna’s pastimes. Crying out the following verse which was originally recited by the Gopis, He rushed towards the Chataka Parvata –

hantayam adrir abala hari dasa varyo
yad rama Krishna charana sparasa pramodah
manam tanoti saha go ganayos tayor yat
paniya suyavasa kandara kanda mulaih
(Srimad Bhagavatam 10.21.18)
–
(The Gopis of Vrindavan exclaimed) Of all the servants of the Lord, this Govardhana Hill is the best! O my friends, this hill supplies Krishna and Balarama, as well as their calves, cows, and cowherd friends, with all kinds of necessities including drinking water, soft grass, caves, fruits, flowers, and vegetables. In this way, the hill offers its respect to the Supreme Lord. Being touched by the lotus feet of Krishna and Balarama, Giri Govardhana appears very jubilant.

Sensing the ecstatic mood of Lord Chaitanya, the devotees ran to protect Him from getting hurt. Svarupa Damodara, Jagadananda Pandita, Gadadhara Pandita, Ramai, Nandai, Shankara Pandita, Paramananda Puri, Brahmananda Bharati, Bhagavan Acharya, Govinda are some of the devotees who chased after the Lord. The symptoms of divine ecstasy manifested in the Lord’s body. The flesh of His pores exploded like pimples and His bodily hairs stood on their ends. Blood and perspiration spilled incessantly from His body. Growing awestruck He could only mutter a gurgling sound. Ceaseless tears oozed from His eyes and His entire body turned white as a conch shell. Shivering, He fell on the ground before Govinda approached and sprinkled water upon Him. 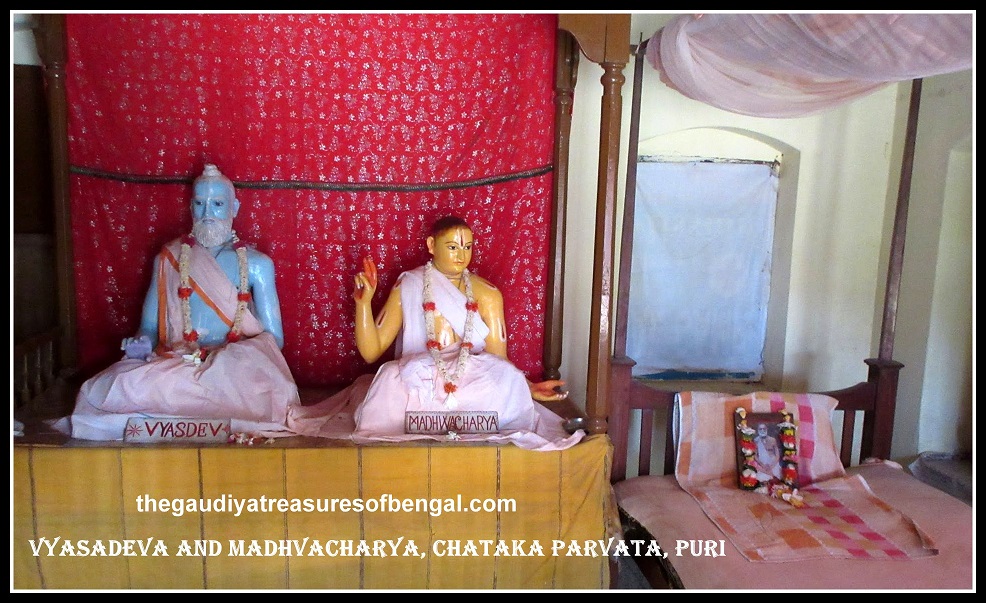 Govinda fanned the Lord with His own outer garment. Seeing the Lord’s body that manifested all eight kinds of transcendental transformations, the devotees remained struck with wonder. The devotees performed Hari Nama Sankirtana for a long time before the Lord could regain His senses. 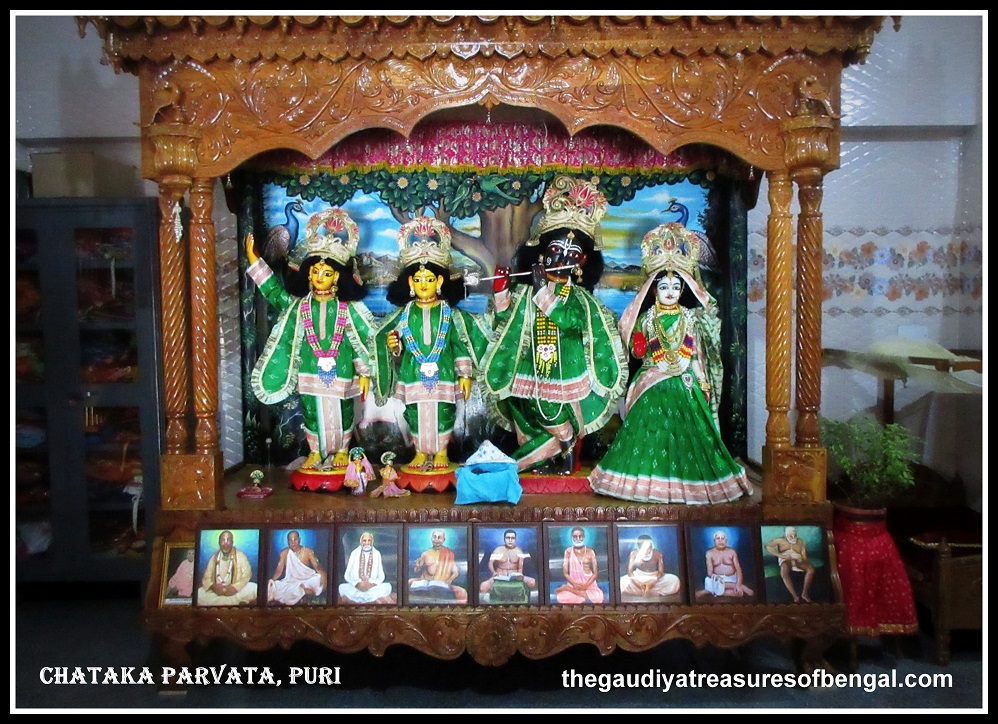 Returning to His partial external consciousness, Lord Chaitanya exclaimed that He had witnessed Krishna playing upon His flute and tending cows in Govardhan (Chataka Parvata). He had also viewed the gopis headed by Radharani at Govardhan who had come over to meet with Krishna. When Krishna and Radharani entered a cave together, the gopis had asked Mahaprabhu to pick some flowers. It was at that time that the devotees had raised a tumultuous sound and carried Lord Chaitanya away from Chataka Parvata. Saying this Sri Chaitanya began to cry, feeling intense separation from Krishna. After some time the Lord returned to His complete external consciousness, bathed at the sea, and shared lunch with the devotees. 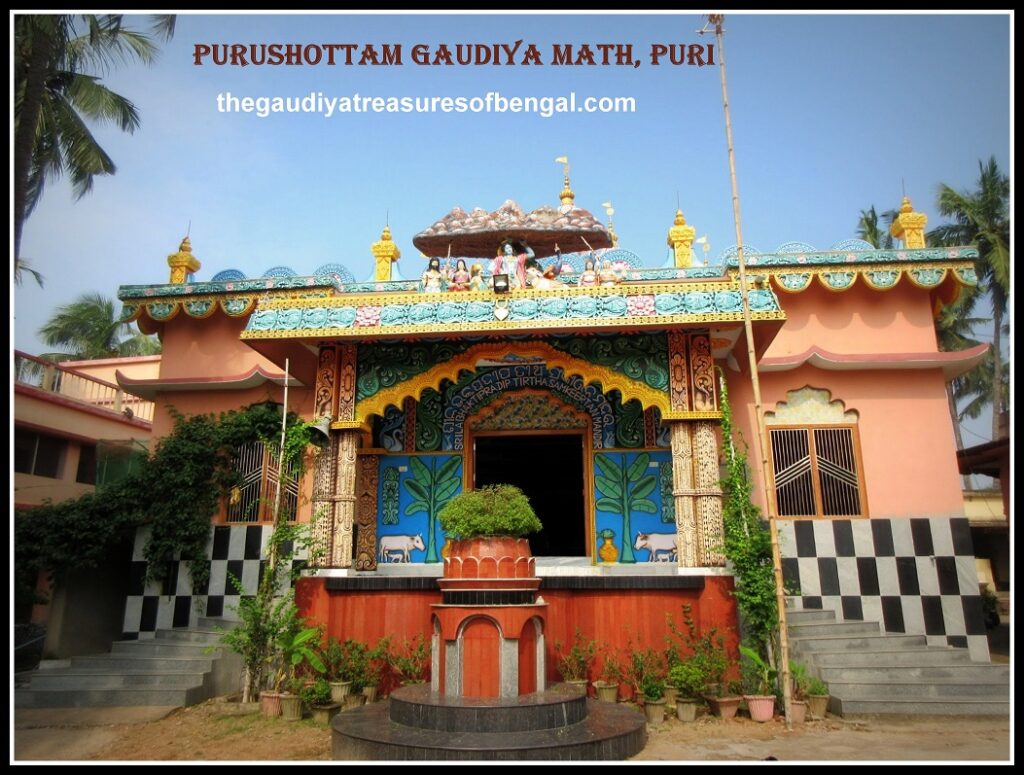 Later, Srila Bhaktisiddhanta Sarasvati Thakur, founder of the worldwide Gaudiya Maths, spent some days meditating at Chataka Parvata, contemplating upon the pastimes of Krishna and Lord Chaitanya. He established ‘Purushottam Gaudiya math’ at this sacred place in the year 1922 AD and installed the deities of Sri Gaura-Gadadhara and Vinoda Madhava jiu. He also organized the worship of Vyasadeva and Sripad Madhvacharya at this temple.

Chataka Parvata lies adjacent to the temple of Tota Gopinath, at Gourbatsahi, in Jagannath Puri. One may seek the directions  of Sri Purushottam Gaudiya math and avail a cab to directly reach the dham.