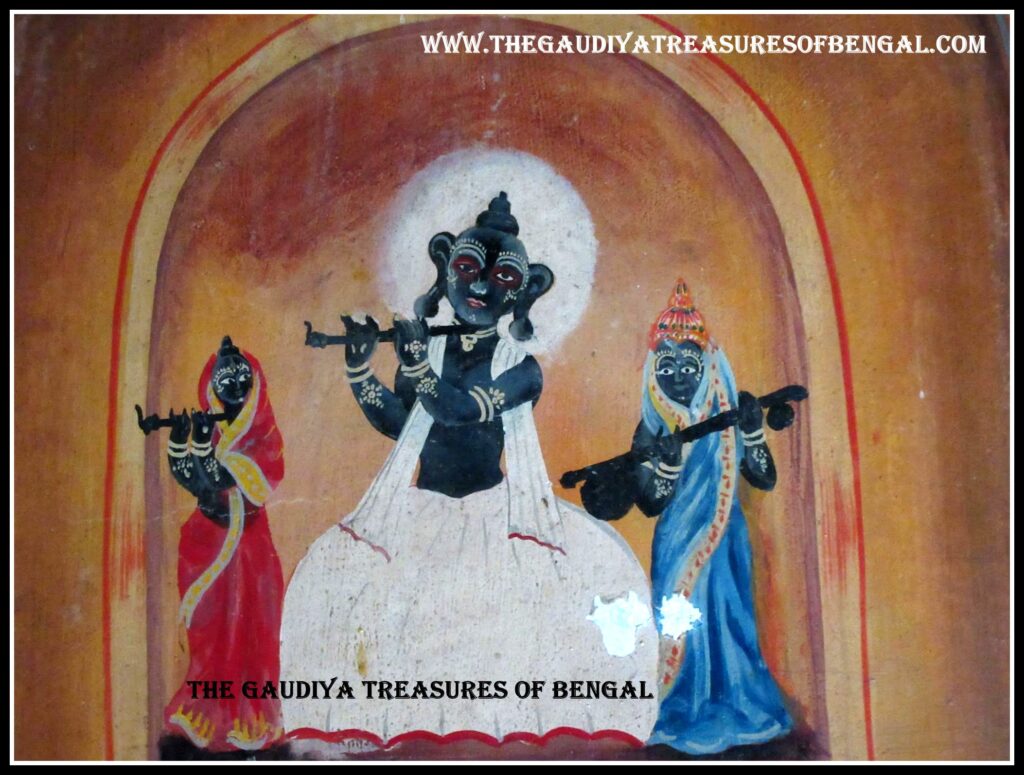 On one occasion, Lord Nityananda had come over to Puri to meet with Chaitanya Mahaprabhu and other devotees. After meeting Sri Chaitanya, Lord Nitai visited the temple of Tota Gopinatha and met with Gadadhar Pandita. Sri Nityananda Prabhu had brought with Him 30 Kgs of the best quality of rice from Bengal and a fine dress for Sri Tota Gopinatha jiu. Gadadhar Pandita was amazed to observe the quality of rice and probed if Lord Nityananda had procured it directly from Vaikuntha. Cooking the rice along with some wild spinach, soft tamarind, and salty seawater, Gadadhar Pandit made a delicious preparation. Suddenly, Lord Chaitanya arrived at that place and jokingly questioned as to why He had not been invited. Noticing the tasty dishes, He yearned to taste them immediately. 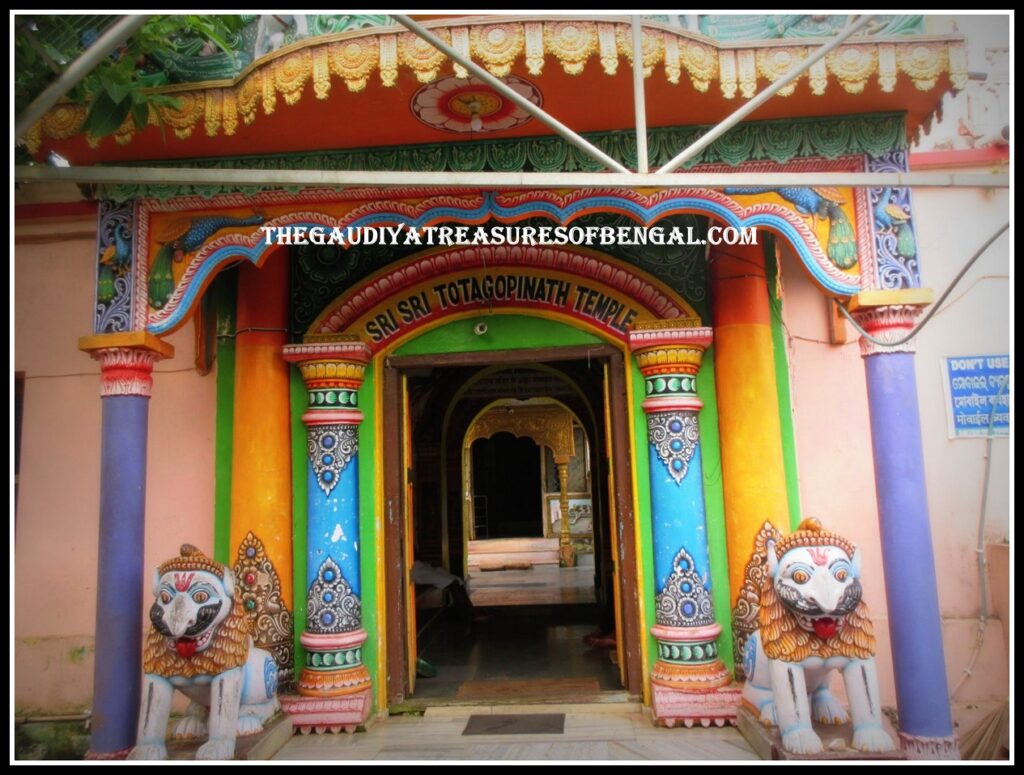 The three Lords then happily enjoyed the Mahaprasadam. Sri Chaitanya appreciated the rice and sabji. He asserted that one simply tasting that food would attain love for Krishna. Mahaprabhu liked the spinach and tamarind preparation very much and remarked that He had never tasted anything like that before. He glorified Gadadhar and commented that Sri Gadadhar must be the one who also cooks for Krishna in Vaikuntha. He jokingly questioned why Gadadhar was hiding from them His divine identity. In this way, the three Lords joked amongst themselves and relished each other’s association.

After forty-eight years, Lord Chaitanya chose to wrap up His manifested pastimes in this world. He disappeared by merging Himself into the deity of Sri Tota Gopinatha. There is a slight crack to be found near the right knee of Sri Tota Gopinatha till this day where Mahaprabhu had merged into the deity. After the disappearance of Mahaprabhu, Sri Gadadhar Pandita greatly suffered from separation. His pitiable condition has been vividly described in ‘Prema Vilasa’. When Srinivasa Acharya approached Sri Gadadhar Pandita during this time, desiring to study Srimad Bhagavatam from Him, Sri Gadadhar’s intense feelings of separation from His beloved Mahaprabhu increased several-fold. As Sri Gadadhar began narrating Srimad Bhagavatam to Srinivasa, He became overwhelmed with grief, and his body trembled, remembering how He had previously narrated the same to Lord Chaitanya and Nityananda sitting at that very place. Streams of tears burst from His eyes and fell upon the book. This washed the letters from the book and they were not clearly readable. Hence Sri Gadadhar instructed Srinivasa to go back to Srikhanda (near Katwa, Bengal), and request Sri Narahari Sarkara Thakura to hand over a new copy of Srimad Bhagavatam, and then return to Puri so that He could continue teaching him. But before Srinivasa could return with the new book to the Tota Gopinath temple, Sri Gadadhar Pandita manifested His disappearance and entered into His eternal pastimes.

Why does Sri Gopinath manifest a sitting posture?

In fact, it was during this time that Gadadhar Pandita was suffering from an intense separation from Lord Chaitanya, that He could no longer gather the physical strength to get up and serve Gopinath jiu properly. He could not lift His arms, dress Tota Gopinath, or offer Him garlands in a fitting manner. Gopinath jiu appeared in Gadadhar Pandita’s dream one night and assured Him that He would become shorter so that Gadadhar Pandita confronted no more difficulties in serving Him. The next morning when Gadadhar entered the Deity room to serve Gopinatha, he saw an amazing sight. The most merciful Lord had sat down in order to accept service from his hands. It is since then that Gopinath jiu manifests a posture of sitting down.

What to See at Tota Gopinath temple :

How to Reach the Tota Gopinath temple :

Gopinatha temple is situated in Sri Ksetra Jagannatha Puri Dhama in an area named Yamesvara Tota. The temple of Tota Gopinath is located by a large water tower. The temple is hardly a five minutes walk from the Chataka Parvat Purushottam Gaudiya Math temple. The place is renowned as the ‘Tota Gopinath temple’ and one can avail cabs to reach here directly. 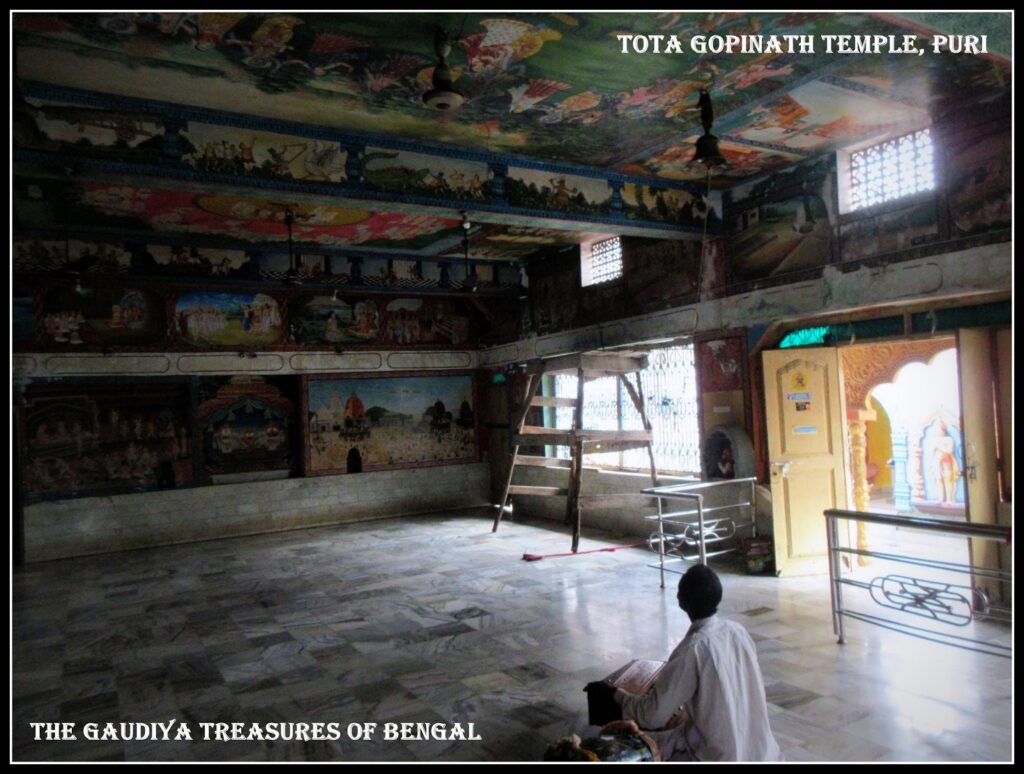