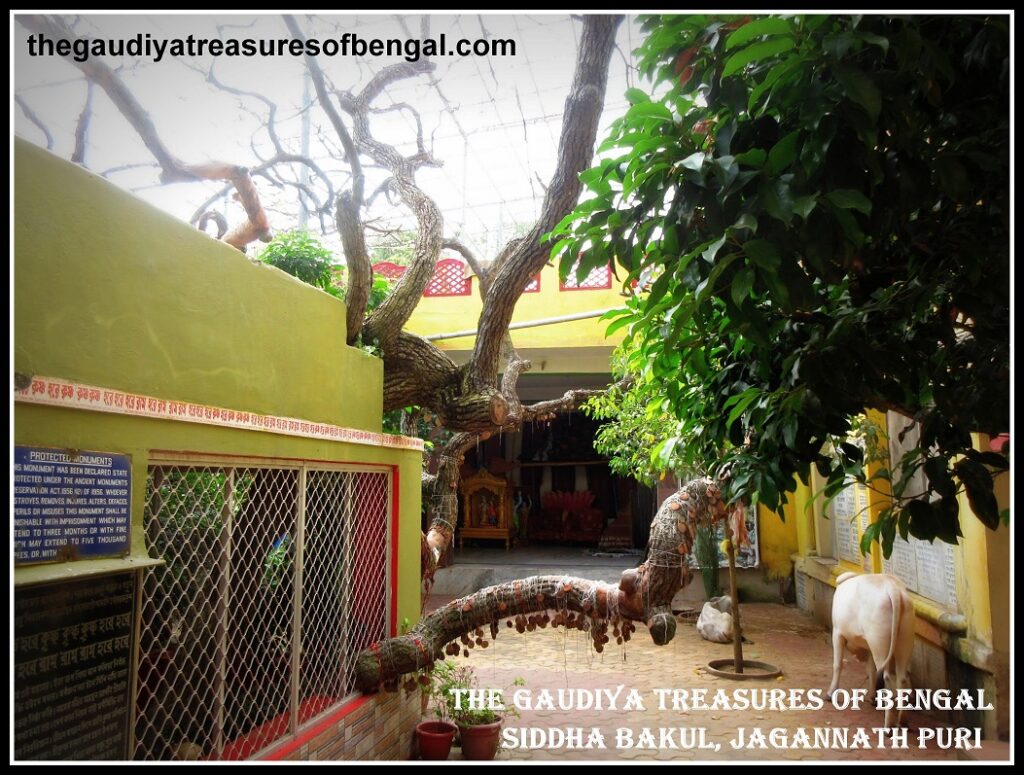 Srila Haridas used to chant three lakh holy names daily sitting under Siddha Bakula. He used to see the chakra at the top of the Jagannatha temple from here and offer his obeisances from a distance. Lord Chaitanya used to meet Haridas everyday over here and discuss with him the deep secrets of the science of devotion. Mahaprabhu used to also arrange for Lord Jagannatha’s Mahaprasadam to be delivered to Haridas Thakur everyday. It was here at Siddha Bakul that Haridas Thakur breathed his last and entered the eternal pastimes of the Supreme Lord. Haridas yearned to pass away while beholding the moonlike face of Lord Gauranga. Lord Gauranga, the Supreme Lord, granted the wish of Haridas, His beloved servant. Holding the lotus feet of Lord Chaitanya upon his heart and drinking the nectar of the Lord’s moon-like face, Haridas incessantly chanted the holy name of Sri Krishna Chaitanya in ecstasy. While chanting thus, Haridas left his body, entering the eternal abode of the Supreme Lord. 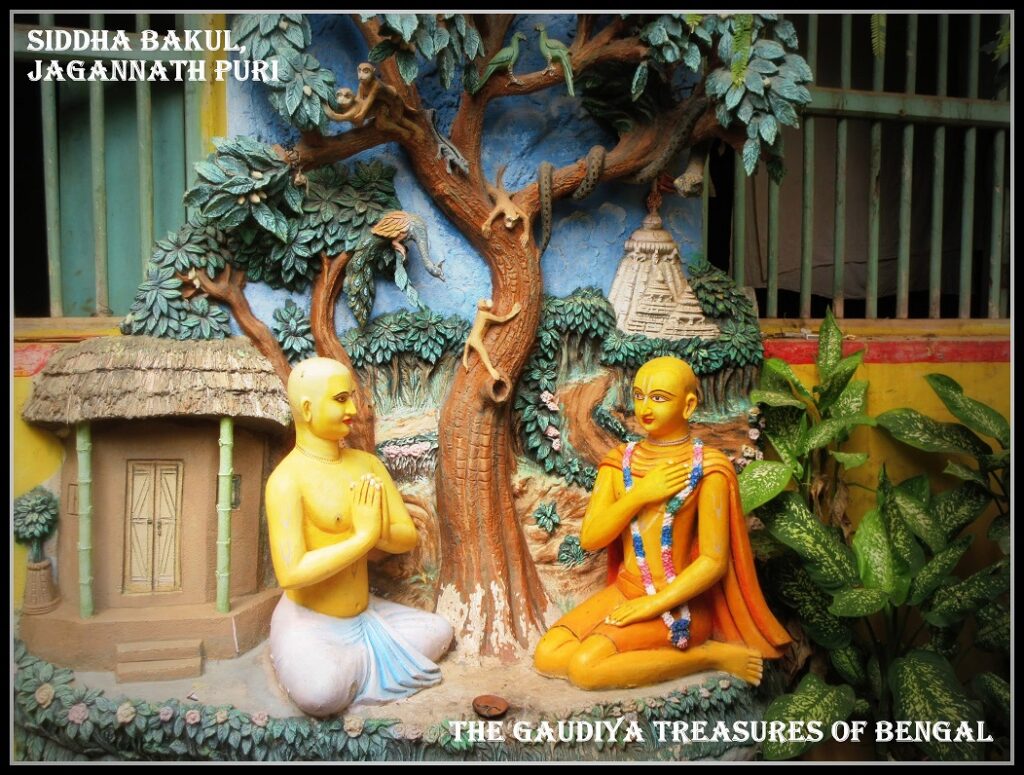 It is said that once the King had ordered to cut down the Siddha Bakul tree to construct Lord Jagannath’s Rathayatra cart. The next day the royal officers found the tree to have turned hollow from within. The main branch of the tree appeared petrified. Realizing its exalted nature, the King refrained from cutting it. The Archaeological Survey of India (ASI) has presently taken over the temple for its preservation and conservation.

Who is Srila Haridas Thakur ?

Lord Brahma, Prahlada Maharaja, and Richika Muni’s son Mahatapa had combinedly incarnated as Haridas Thakur. Srila Haridas Thakur is the namacharya of the Brahma-Madhva-Gaudiya sampradaya and is an eternal associate of Sri Chiatanya Mahaprabhu. Srila Haridas Thakur had accompanied Lord Chaitanya in most of His magnanimous pastimes. He was an empowered incarnation of the Supreme Lord who had appeared just to set an example for all of us to follow. He had delivered innumerable suffering souls by bestowing upon them the nectar of the holy name. Though being born in a family of Muslims, Haridas Thakur widely propagated the chanting of Krishna’s holy name as the ultimate spiritual practice and preached how the Lord and His holy names are actually non-different from each other. Haridas Thakur teaches us that the holy names of Krishna are non-sectarian and that God is one though we might call upon Him by different names. The relationship between the Lord (supersoul) and the jiva (soul) is eternal and chanting of the ‘Hare Krishna Mahamantra’ is the most effective means to evoke and revive this eternal relationship, especially in this age of Kali. Haridas Thakur used to chant Krishna’s holy names, 300000 times a day, a practice he continued till the very end of his life. 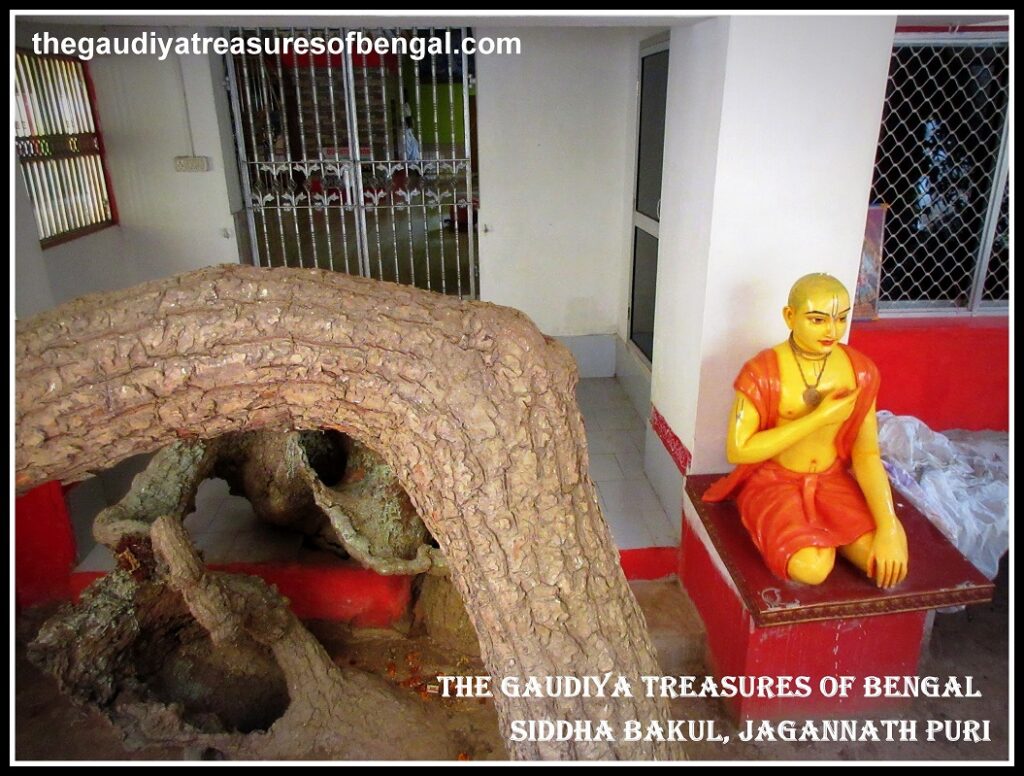 In the ‘Navadvipa Dham Mahatmya’, Srila Bhaktivinoda Thakur mentions that in Dvapara Yuga, Lord Brahma had stolen the cows, cowherd boys, and calves of Vrindavana to test whether Krishna was indeed the Supreme Lord. On realizing that Krishna was indeed his worshipable Supreme master, Brahma felt embarrassed. As atonement, he then reached Mayapur and began meditating upon the blissful form of Lord Chaitanya. Lord Chaitanya became very pleased and understanding the desires of Brahma, granted him the boon that he would become His intimate associate when the Lord would next appear in this material world. However, to ensure that Brahma didn’t become puffed up of his position again, he arranged that Brahma incarnated as Haridas Thakur who was born in a family of Muslims. Being an embodiment of humility and being free from pride, Srila Haridas widely preached the glories of the holy name and brought auspiciousness to all.

Srila Haridas Thakur, was born in the village of Buron, presently situated within the district of Khulna, in Bangladesh. According to Advaita vilasa, Sri Haridas Thakur was about 35 years elder to Sri Chaitanya Mahaprabhu and his father’s name was Khan Ullah Kazi. Sri Chaitanya Bhagavata states the following about this great personality –

Translation – Haridas Thakur had appeared in the village of Buron and by his mercy, the nectar of the holy name became revealed in those blessed lands. After staying many days and manifesting numerous pastimes, Srila Haridas shifted to Phulia, a place situated by the Ganges. Sri Advaita Acharya had His residence not very far from here, at Santipur. Receiving the association of Haridas Thakur, Advaita Gosai became overjoyed and roared in ecstasy.

What to See at Siddha Bakul :

Srila Haridas Thakura’s bhajan Kutir (Siddha Bakul) is located on the Bali sahi Road. It is not very far from Gambhira, the erstwhile residence of Lord Chaitanya in Puri. Siddha Bakul is about a Kilometer from the Jagannath temple and about 3 Kms from the Jagannath Puri Railway station. The site is famous as ‘Siddha Bakul’ and one can avail cabs to reach here directly. 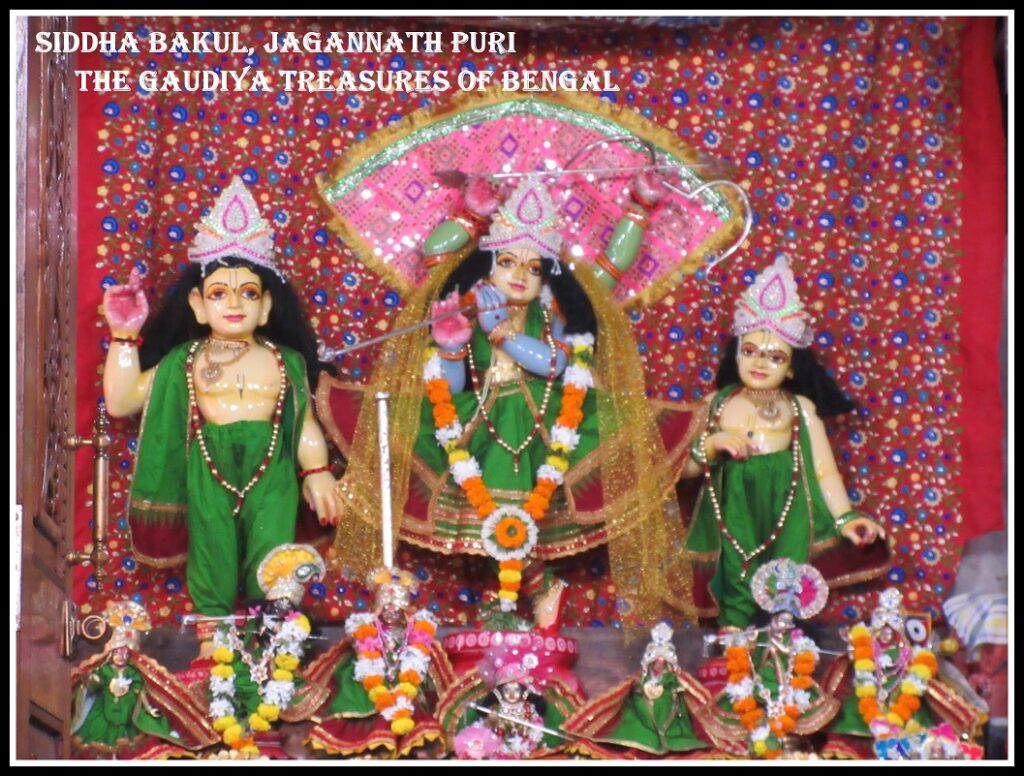