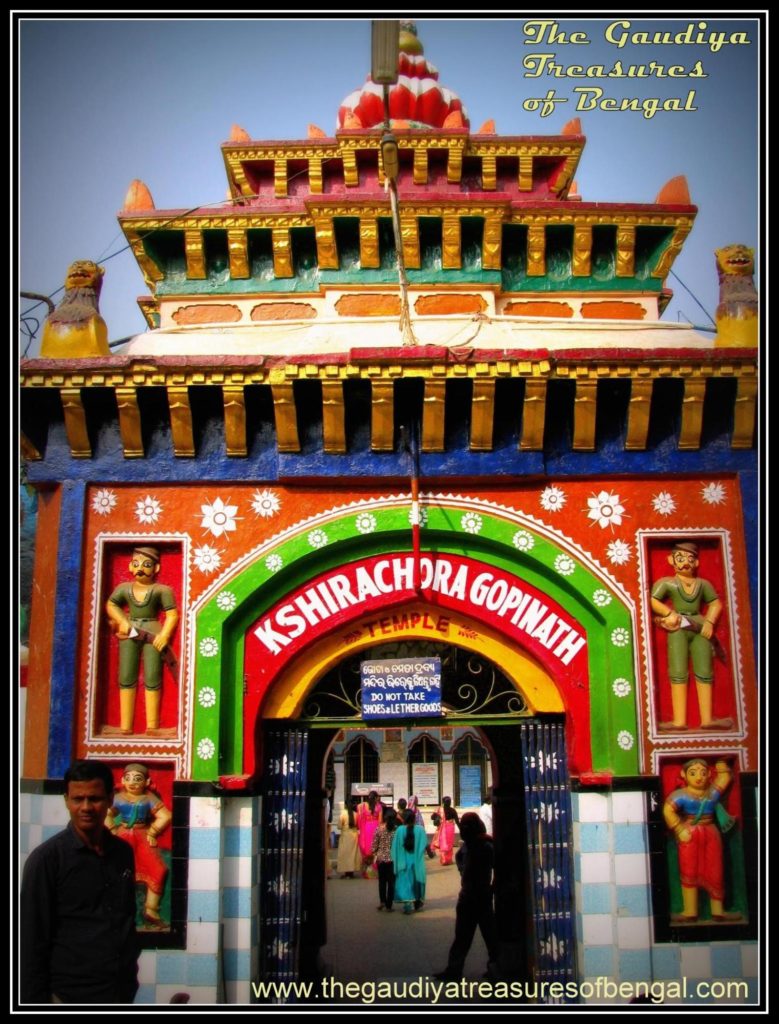 Sri Madhavendra Puri was the spiritual master of Isvara Puri who in turn was the spiritual master of Chaitanya Mahaprabhu, the most merciful incarnation of the Supreme Lord. Sri Madhavendra was almost always intoxicated with an intense love for the Supreme. He was mostly devoid of his external consciousness and had no awareness of where he was or what time of the day it was. Sometimes standing and sometimes falling, all the ecstatic symptoms manifested in his body simultaneously. Sri Madhavendra Puri, a devotee in the line of Madhvacharya, is designated as the first sprout (ankura) of the desire tree of devotion.

Once while in Vrindavana, Sri Madhavendra had seated himself under a tree to take some rest after circumambulating the sacred Govardhan hill (covering a distance of around 22 Kms). While he was resting, a small cowherd boy approached him and offered him a pot of milk. The boy was curious as to why Madhavendra was not begging for food, and therefore asked what meditation he was into. It is a general practice in India, that renunciants, who have completely dedicated their lives unto serving the Lord, usually beg to maintain their subsistence, as they do not go out to earn any more. The householders are expected to donate and help them sustain themselves. The boy seemed to know that Madhavendra Puri was an exalted personality completely dedicated to the service of the Lord. The boy was amazed that he did not beg. As a result, Madhavendra was fasting since he didn’t have any food. Sri Madhavendra was pleased with the beauty and the sweet words of the small boy, who claimed to be a resident of that village. The boy also notified him that no one in his village fasted and if someone did fast, then he would himself come and take care of his food. The boy added that he was in a hurry as he had to go milk the cows, but he would return on his way back to fetch the milk pot from Sri Madhavendra Puri.

After drinking the milk, Sri Madhavendra washed the pot and kept it aside for the cowherd boy, waiting for him to return. But the boy was nowhere to be seen. After waiting for a while, Sri Madhavendra fell asleep. The little cowherd boy then appeared in his dream in which He revealed Himself to be none other than Sri Vrajendra Nandana Krishna, who had appeared to personally shower His mercy upon him. In the dream, the boy held Madhavendra’s hand and guided him towards a certain bush in the jungle, notifying him that He was buried at that site for hundreds of years. The Lord also informed Madhavendra of His great distress as He suffered a lot from the severe heat, cold, wind, and rains while staying buried there. He revealed that He was Gopala, the lifter of the Govardhan hill and that He had originally been installed by King Vajranabha, the great-grandson of Lord Krishna. In the course of time, when the Mughals attacked Vrindavana, the priest hid Him in the bushes and fled. Sri Gopala had been waiting there for Sri Madhavendra ever since, in order to rescue Him from His situation (bahudina tomara patha kari nirikshana,kabe ashi madhava ama karibe sevana).

The deity of Gopala is rescued :

This is the kind of reciprocation that the Lord enjoys with His intimate associates. He keeps aside some very special services for them to do. Gopala, the Supreme Personality of Godhead, was not dependent on anyone to rescue Him from the jungle and He could have done it Himself. But actually, in order to glorify Sri Madhavendra Puri, He arranged His discovery in this fashion. This is a display of the deep love that the Lord possesses for His servants. Gopala informed Sri Madhavendra that He had been purchased by his love for Him. Gopala also expressed His desire to be established in a nice temple at the top of the Govardhana Hill. He also wanted His body to be thoroughly cleansed with large quantities of cold water. Saying this, the little boy in the dream disappeared. 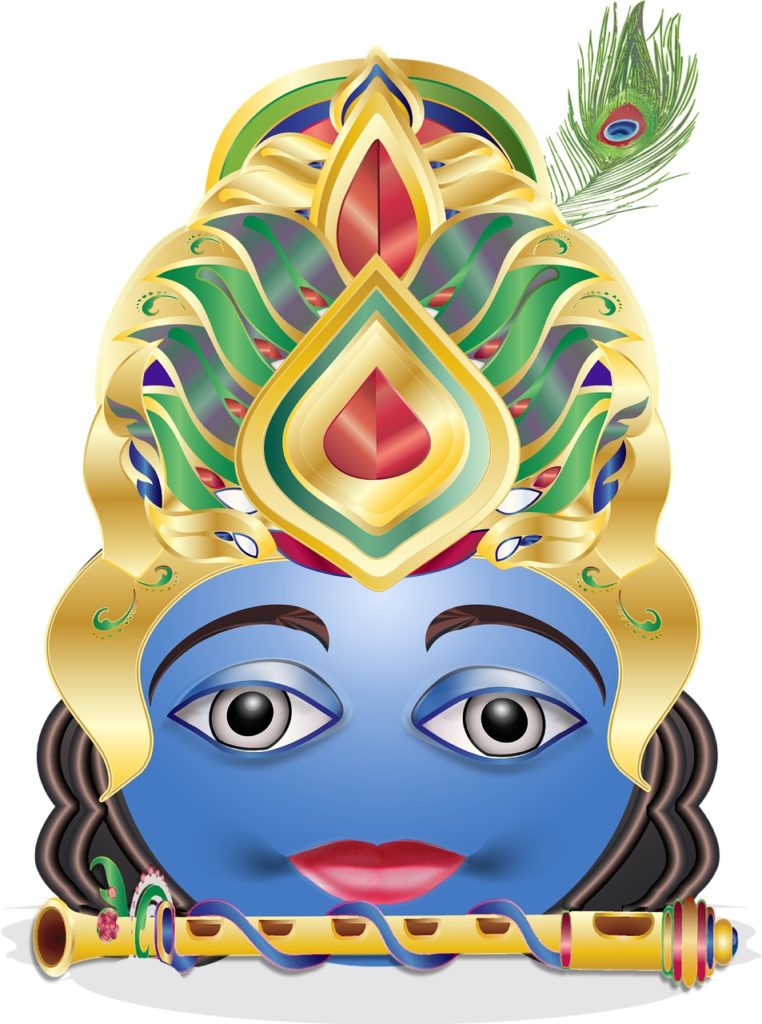 Sri Madhavendra Puri woke up from his dream and began considering it. He lamented that when he had first seen the little cowherd boy, he could not recognize Him as his beloved Krishna. The next morning, he went to the village and narrated the whole story to everyone. He assembled the village people who then began digging up the concerned bush. When the Gopala deity was unearthed from inside, the people were filled with wonder and delight.

Thereafter the enchanting deity of Gopala was carried atop the Govardhan hill. He was then seated upon a beautiful throne and thoroughly cleansed with water. Hundreds of buckets of water were fetched from the Govinda Kunda. Thereafter a huge festival was observed when Sri Gopala was being installed. Innumerable food items were offered unto Him. People were sumptuously fed. The grandeur of the event was comparable to that of the annakuta festival of Dvapara. Eventually, two brahmanas arrived from Bengal, who were very dear to Madhavendra Puri. Sri Madhavendra entrusted upon them the responsibility of deity service.

Sri Madhavendra is ordered to fetch Sandalwood from Orissa :

Things continued smoothly for the next two years. Then suddenly Gopala appeared in his dream once more. He revealed that He was still feeling intense heat and His body temperature, in spite of being bathed with so much water, was not sliding down. So He asked Madhavendra to go to Jagannatha Puri (in Orissa) and fetch sandalwood, so that its paste can be smeared over His body, to cool Him down. Sri Madhavendra Puri became very happy to receive this order from His beloved Gopala and started off for Orissa.

While narrating this pastime, Lord Chaitanya greatly glorified Sri Madhavendra Puri. He explained that although Orissa was thousands of miles away from Vrindavana, yet Sri Puri did not give a second thought on whether he should undertake this journey. Without considering his personal comforts, without begging for food, Sri Madhavendra traveled for days altogether just to please his beloved Gopala.

On his way, he passed through Bengal. When he reached Santipur, Sri Advaita Acharya, begged to receive initiation from him. Sri Madhavendra complied and after initiating him continued with his journey. Reaching Remuna (in Balasore), Sri Madhavendra obtained the mesmerizing darsana of Sri Gopinath. Seeing His beautiful form, Sri Puri was lost for words. He began to sing and dance in ecstasy.

Inquiring from the priest, Sri Puri understood that the food that was offered to Sri Gopinath were of the highest standard. He also learned of a unique sweet rice preparation (Khira – Amrita Keli), that was offered to Gopinath jiu every day in the evening in twelve earthen pots. Sri Madhavendra Puri thought to himself, that if someone somehow offered him this nectarian Khira, even a little, he would be able to make a similar preparation and offer it to Gopala, back in Govardhan. But Sri Madhavendra Puri didn’t reveal his desire to anyone. After the bhoga arati was completed, he paid obeisances unto the Lord and left the Gopinath temple silently. Sri Madhavendra avoided begging. If without his begging, someone would offer him anything to eat, he would accept it; else he would fast. Bhaktivedanta Swami Prabhupada mentions that such characteristics are symptoms of one in the Paramahamsa stage, the highest stage for a sannyasi. Sitting quietly at the city market place, Sri Madhavendra continued chanting his rounds. 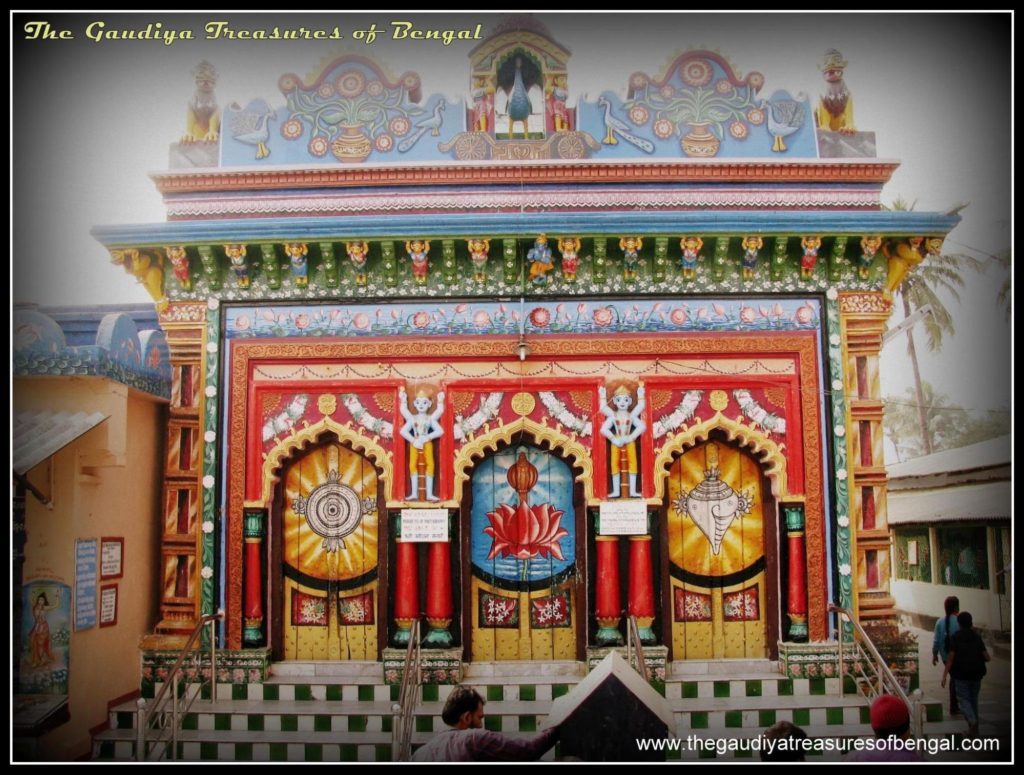 An amazing pastime then took place. Gopinath jiu appeared in the temple priest’s dream and informed him that He had purposely stolen a pot of Khira and hid it behind the curtains, out of everyone else’s sight. Gopinath jiu added that He wanted the pot to be at once delivered to Sri Madhavendra Puri who was to be found at the city marketplace. Thereafter the priest took his bath and on opening the temple door, indeed found the stolen pot of Khira behind the curtains. Fetching it, the priest arrived at the marketplace. The priest loudly called out for Madhavendra’s name and exclaimed that there was no one in the three worlds more fortunate than him as Sri Gopinath had taken the pains to personally steal for him (khira lana sukhe tumi karaha bhakshane, toma sama bhagyavan nahi tribhuvane).

Madhavendra Puri then identified himself and accepted the pot of Khira from the priest. When he heard how Gopinath jiu had taken the pain to fulfill his desire, Sri Madhavendra became ecstatic. He honored the heavenly Prasada and then, breaking the pot into small pieces, tied it around his cloth. Each day, Sri Madhavendra would eat a small portion of this earthen pot and become absorbed in ecstasy. This is how the Sri Gopinath jiu at Remuna came to be known as Khirachora Gopinath.

Thereafter Sri Madhavendra Puri left for Jagannatha Puri and after collecting all the required camphor and sandalwood, returned to Remuna once again, on his way back. He offered his humble obeisances to Sri Khirachora Gopinath and was overwhelmed with ecstatic feelings. Recognizing him, the priest offered him the due respect and also handed over a pot of Khira mahaprasadam. Sri Madhavendra relished it. He rested for the night at the temple. Thereafter, towards the end of the night, Sri Madhavendra had another dream, in which his beloved Gopala appeared and instructed him as follows – He ordered him, to smear the pulp of all the sandalwood and camphor he had fetched, on the body of Sri Gopinath jiu. Gopala informed that He and Gopinath were non-different and hence smearing the sandalwood on Gopinath jiu’s body would serve the same purpose. Sri Madhavendra Puri woke up and was very happy to receive these instructions from Gopala. He made the necessary arrangements for all the sandalwood to be pasted and anointed on the body of Sri Khirachora Gopinath jiu. All of Gopinath jiu’s servants were also delighted. Sri Madhavendra Puri resided there at the temple in Remuna until the entire stock of sandalwood had been smeared on Sri Gopinath jiu’s body.