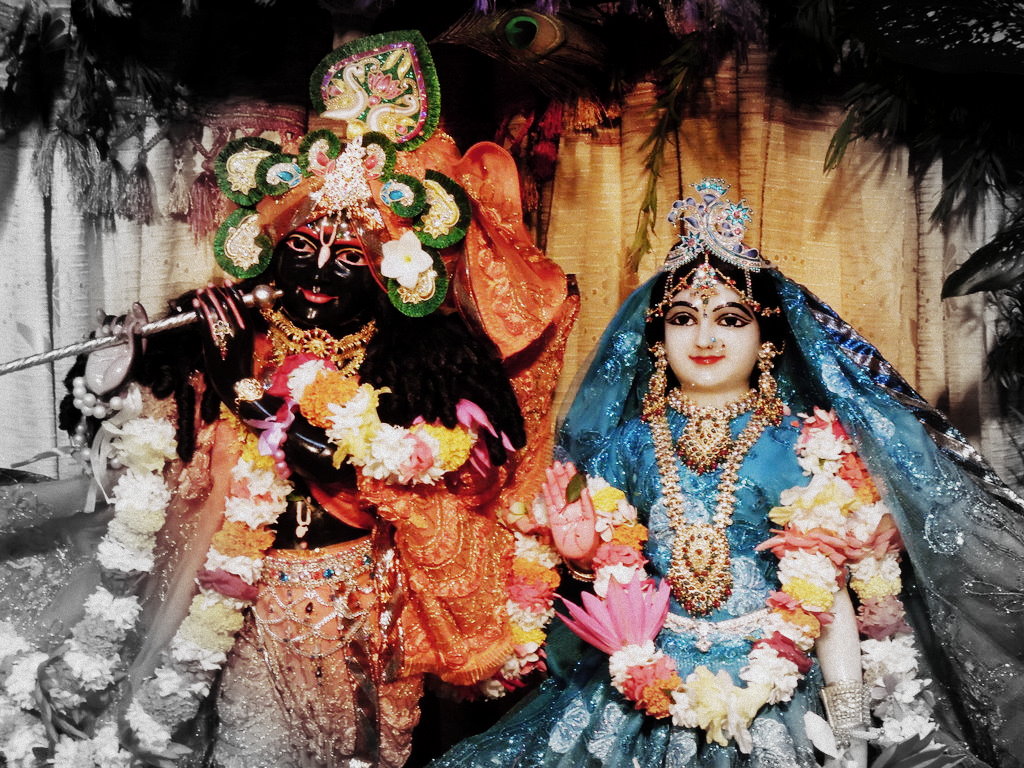 Sri Pundarika Vidyanidhi, and the two brothers – Mukunda Datta and Vasudeva Datta, had originally hailed from Chittagong, Bangladesh. They were intimate associates of Sri Chaitanya Mahaprabhu and had appeared to assist Him in his magnanimous pastimes. Kavi Karnapura reveals in Gaura Ganoddesha Dipika that Sri Pundarika Vidyanidhi was the incarnation of Vrishabhanu Maharaj, the father of Srimati Radharani. While Mukunda Datta and Vasudeva Datta were the incarnations of the singers Madhukantha and Madhuvrata respectively. Lord Gauranga and Nityananda loved dancing to the tunes of Vasudeva and Mukunda Datta’s melodious songs.

Mukunda and Vasudeva Datta were born in the village of Chanhara which falls within the jurisdiction of the police station named Patiya in the Chittagong district of Bangladesh. They were very dear to Lord Chaitanya. Mukunda was of the same age as Chaitanya Mahaprabhu and they used to study together in the same school. Mukunda and Vasudeva Datta had shifted to Nabadwip to pursue their studies at a very early age. Since then, they have been in the association of Chaitanya Mahaprabhu. Mukunda Datta remained engrossed with Krishna consciousness from a very early age. Lord Chaitanya used to tease him and take pleasure in defeating him in debates. Later when Chaitanya Mahaprabhu revealed Himself as a great devotee of Krishna, Mukunda Datta became His faithful companion. 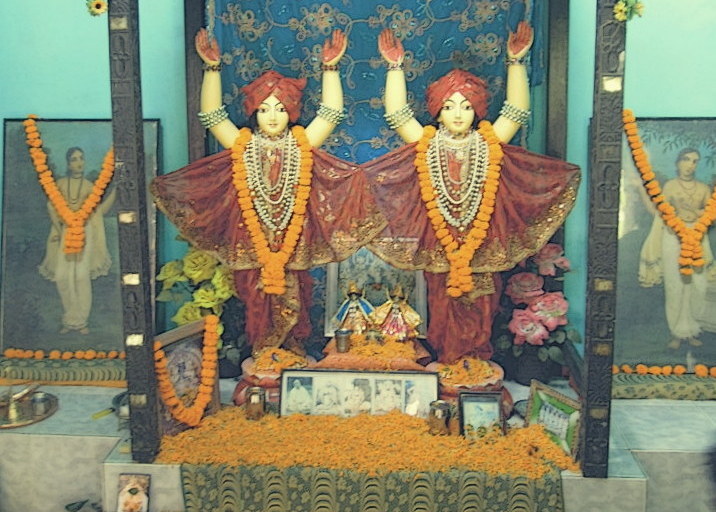 It was Mukunda Datta who introduced Gadadhara Pandita to Pundarika Vidyanidhi and enabled him to take shelter of this great devotee. Mukunda Datta used to recite verses from Srimad Bhagavatam and sing melodiously to pleasure Chaitanya Mahaprabhu. During the Mahaprakash Lila, Lord Chaitanya initially refused to bestow His mercy upon Mukunda Datta as he associated with both the devotees and the mayavadis (Advaita Vadis). When the other devotees requested Lord Chaitanya again and again to forgive Mukunda, Mahaprabhu replied that it would take millions of lifetimes for Mukunda to attain His shelter. Hearing this Mukunda was overjoyed thinking that there was atleast some hope for him at the end of these million lifetimes. Sri Chaitanya Mahaprabhu however readily pardoned Mukunda as He understood that Mukunda Datta was going to give up the association of the Mayavadis for good. So he called Him at once and bestowed his causeless mercy upon Him.

Vasudeva Datta was the elder brother of Mukunda Datta and was an embodiment of divine qualities. Lord Chaitanya once stated that though Mukunda was His constant companion since childhood, yet He derived more pleasure upon seeing Vasudeva Datta. Vasudeva was very close to Srivasa Pandit and Sivananda Sena. He lived near Kumarahatta (KanchraPara) where the homes of these two great devotees were located. Vasudeva was very generous by nature. Never thinking of himself, he spent his money liberally for others. Mahaprabhu noticed this and asked Sivananda Sena to supervise his financial affairs.         Vasudeva was so distressed observing the suffering of the other living beings that he was ready to accept their sins and suffer in hell for them. He prayed emotionally to Mahaprabhu so that they could be relieved of their material distress instead. He wished to accept the sins of every single living being and suffer in hell so that they could be delivered of their material sufferings. 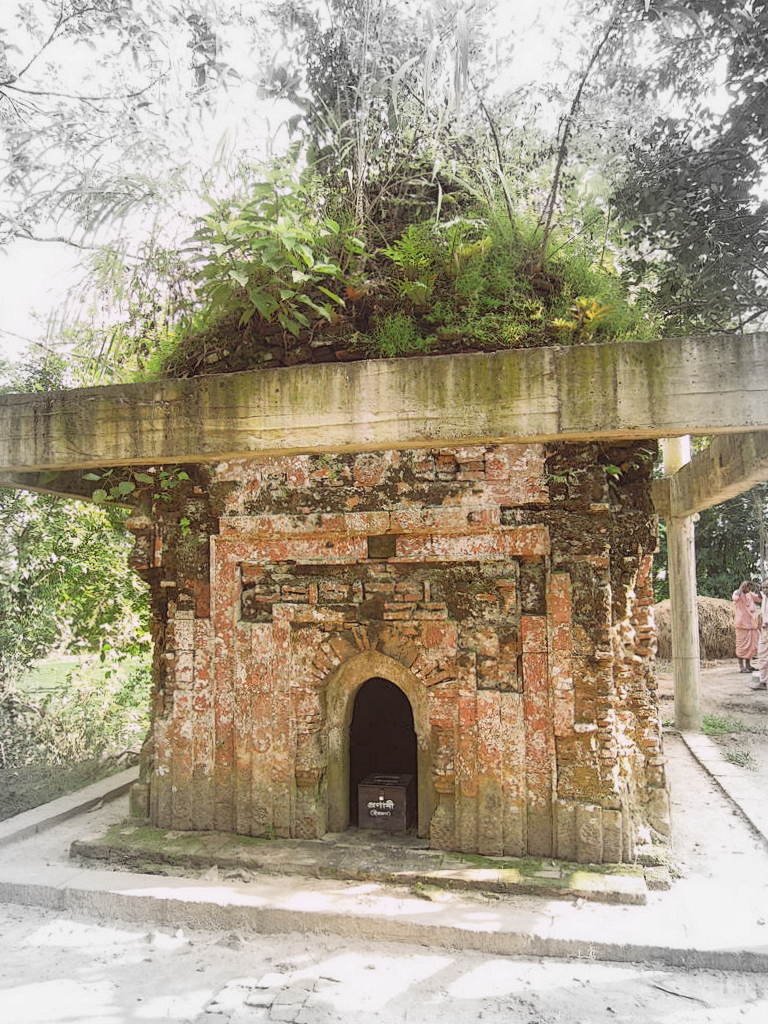 Sri Pundarika Vidyanidhi was a great branch of Lord Chaitanya’s desire tree of devotional service. He was so dear to Lord Chaitanya that the Lord would sometimes cry in his absence (…yanra nama lana prabhu kandila apani ). Pundarika hailed from a village known as Mekhala, situated in the Chittagong district of Bangladesh and was a disciple of Srila Madhavendra Puri. Kavi Karnapura mentions in his Gaura Ganoddesha Dipika that Sri Pundarika Vidyanidhi was previously Vrishabhanu Maharaj, the father of Srimati Radharani. Lord Chaitanya hence sometimes would also refer to Pundarika as His father. Pundarika Vidyanidhi’s father was named Baneshvara and his mother, Ganga Devi. He was born on Vasanta-panchami, the fifth day of the waxing moon in the month of Magh. Sri Chaitanya once described how Sri Pundarika never bathed in the Ganges and strictly avoided touching her with his feet.Such was his respect towards mother Ganges, that he felt deeply pained seeing others utilizing her for washing their mouth ,hair and dirty clothes. Before performing any of his religious duties, Sri Pundarika would always drink Ganges water. Glorifying him thus, Lord Chaitanya became absorbed in an ecstatic trance and intensely desired to receive his association again. Listening to his devotion for mother ganges ‘The Gaudiya Treasures of Bengal’ cannot help but contemplate upon the beautiful pastimes of mother Ganges that once took place at Sakhai Bazar (near katwa). We have covered the pastime in detail in a separate article entitled – ‘Sri Uddharana Pura ,Barddhaman (Near Katwa)’.

According to the desires of the Lord, Sri Pundarika soon arrived at Navadvipa. Mukunda Datta informed Gadadhara Pandita that an elevated vaishnava had arrived and the two friends then happily set out to meet and receive his association.Gadadhara Pandita offered His respectful obeisances unto Pundarika, who was then comfortably seated upon a soft mattress supporting his back with silk pillows. Above his head were three tiers of ornamented canopies and there were large mirrors on his either side into which he frequently glanced.Pundarika’s hair was well groomed and they looked shiny with perfumed oil. Behind him were two men fanning him with peacock feathers.Observing the opulence that surrounded Pundarika, Sri Gadadhara Pandita, who was very renounced from His very childhood, could not grasp his elevated stature and mistook him to be an ordinary materialist.

Mukunda could understand Gadadhara’s mind and took it upon himself to reveal the real nature of Pundarika. With his sweet voice, he began reciting a verse describing the glories of Sri Krishna. He asked how one can be more merciful than He ,who had granted the position of mother to the she-demon Putana, who wanted to kill Him by smearing poison on her breast. Just by offering her breast and by wanting to feed little Krishna ,even though her actual desire was to poison Him, the demon Putana had achieved liberation and the exalted status of His mother. As soon as Sri Pundarika heard this verse, he became absorbed in an intense spiritual emotion and rolled over the ground in ecstasy. He smashed all the valuable paraphernalia that surrounded him,and began tearing off his costly clothes. Incessantly shedding tears ,he cried out for the association of the Supreme Lord. The storm of ecstatic love abated when Sri Pundarika fell down unconscious, remaining submerged in an ocean of bliss. 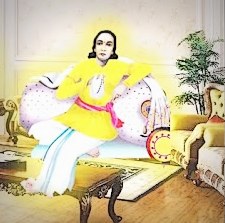 Gadadhara Pandita at once realized His mistake and became very sorry that He had offended a great devotee like Pundarika. Wanting to atone for His behaviour, Sri Gadadhara decided to take initiation from Sri Pundarika. He thought that His Guru would surely forgive Him and free Him from the burden of guilt. When He revealed His decision to Mukunda, he became very happy. Mukunda subsequently disclosed Gadadhara’s desire to Pundarika Vidyanidhi who agreed and initiated Sri Gadadhara Pandita on an auspicious day.

This pastime provides a very important lesson for all of us. A vaishnava is not someone whom we recognize just by observing his externals.There are many pseudo devotees who adorn tulasi neck beads and tilaka, and whom we initially identify as Vaishnavas, only for their actions to prove us wrong. A vaishnava is someone who possesses an intense love for Sri Guru and Gauranga. Vaishnavism ,or love for the Supreme, is not something that is dependent on one’s dress, lineage or occupation. Instead one’s desire and dedication to serve and please his bonafide spiritual master, is the only criteria by which he should be recognized.

On one occasion, Pundarika Vishyanidhi criticized the devotees of Lord Jagannatha when he observed them offering unwashed starched clothes to the Lordships. He did not feel happy about it and expressed to his friend Svaripa Damodara that it was not the proper etiquette of serving the deities. Svarupa Damodar answered that the Supreme Lord is beyond the rules and regulations. Besides, it has become a general custom in Puri and therefore there was no fault. Vidyanidhi did not find this conclusion satisfying and he countered by saying, “That may be true for the Supreme Lord Himself. But His servants should strictly follow the rules of the scripture”. Vidyanidhi is Mahaprabhu’s dear associate and beyond any fault, but once again we see that the Lord teaches particular lessons through His Devotees. That night Pundarika had a dream in which Lord Jagannatha and Baladeva slapped Him upon each of his cheeks. The punishment was so brutal that Pundarika cried out,  “Krishna save me! Krishna, save me! Forgive me my offense!”. Lord Jagannatha chastised Him saying, “There is no end to your offensiveness. Just as there is no question of pure and impure in My case, the same holds for My servants. You are staying here; you should know all this”. When he woke up in the morning, Pundarika Vidyanidhi as well as the devotees saw the red marks upon his cheeks. This pastime again proved how dear Pundarika was to the Lord as it is only to His dearest that the Lord personally comes to chastise. Pundarika was also privately very happy that the Lord had corrected him in this way.

Pundarika Vidyanidhi Sripat – Reaching the city of Chittagong, one needs to avail a bus traveling towards Hathazari. Arriving at the Hathazari stoppage, one can avail an autorickshaw to reach the Sipat of Pundarika Vidyanidhi at Mekhala. The dham is presently served by the devotees of Iskcon and is renowned as Pundarika Dham.

What to See at Pundarika Dham – Some of the religious sites that can be seen here include Srila Pundarika Vidyanidhi’s Bhajan Kutir, Radha Kunda, Shyam Kunda, Giri Govardhana, and Sarva Tirtha Parikrama Mandir.

Mukunda Datta and Vasudeva Datta sripat – The village of Chanhara falls under the jurisdiction of Patiya Upazila, situated within the Chittagong district of Bangladesh. One traveling from Chittagong needs to avail a bus traveling towards Cox Bazar. Arriving at the stoppage of Patiya, one needs to travel about seven kilometers to reach the sripat of Mukunda and Vasudeva Datta.

What to see at the sripat of Vasudeva Datta and Mukunda Datta – Ruins of their ancestral house and the worshipable Salagram silas that were served by these exalted personalities.