To the east of this place is situated Suvarna Vihara, the incomparable majestic palace of Suvarna sen. There Lord Gaurachandra dances along with His associates in an enchanting golden form.

Located in the island of Godruma, Suvarna Vihara is the sacred place where the palace of King Suvarna Sen was once located.  When Nityananda prabhu showed this place to Jiva Goswami, He explained that Suvarna Vihara is transcendental to material nature. King Suvarna Sen was the ruler of this place in satya Yuga. He had ruled his kingdom for long and had always remained absorbed in acquiring material wealth. But by his good fortune Narada muni appeared before him once and had instructed him in the science of Bhakti yoga.

Narada muni explained to him how one’s body is temporary but one’s spiritual journey is eternal. He explained how his relationships with his family and relatives would end as soon as he leaves his body. Suvarna Sen learnt how the material life was full of pain & unhappiness and that real happiness resided in the spiritual world. Narada Muni taught him about the paths of Karma, Jnana and Bhakti and enlightened him about the different types of Muktis (liberations). He explained how merging into the impersonal effulgence of the Lord (Sayujya Mukti) is equivalent to committing spiritual suicide, as in this type of liberation one gets liberated from material bondage but does not experience any bliss. So the wise do not accept the paths of bhukti (material enjoyment) or mukti (Sayujya Mukti). Instead they hanker for devotional service unto the Supreme Lord. These devotees join the Lord in His eternal pastimes in the spiritual world.

Narada Muni explained How Krishna, the Supreme Lord, is like the sun and Maya (illusion) was like His shadow. The living entity, being infinitesimal, sometimes becomes overwhelmed by the illusory energy of the Lord. He becomes engaged in fruitive activities and suffers in the process.

Wandering throughout the material creation, in one body or the other, one repeatedly suffers birth, disease, old age and death. In the course of his journey, if one fortunately comes in contact with a pure devotee of the lord, one develops sraddha (faith) upon the Lord. By associating with devotees (sadhu sanga), one practices devotion (bhajana kriya) and he gradually gives up all sinful habits (Anarthas). Slowly his devotion matures and ultimately he receives prema or the pure love of God.

Narada Muni explained to Suvarna Sena how fortunate he was ,as he had his kingdom in Navadvipa, the eternal abode of Lord Gauranga. He also informed him how Krishna would descend as Gauranga and perform His pastimes in Navadvipa, at the beginning of kali Yuga.  One who takes shelter of Gauranga is able to easily nullify his offenses and obtain shelter of Lord Krishna. Saying this Narada lost control and began dancing chanting the name of Lord Gauranga.Later, while sleeping, the king saw Gauranga and Gadadhara ,along with their associates dancing in his courtyard. Surrounding the golden form of Gaura. they were all chanting Hare Krishna!  When he woke up, Suvarna Sen began crying feeling his separation from Lord Gaurahari. Then he heard a voice, ‘O king, when I appear, you shall be amongst My associates. Your name shall be Buddhimanta Khan and you will receive the transcendental dhama and a chance to serve the lotus feet of Gauranga’. Hearing this the king became composed.

In the pastimes of Lord Gauranga, Buddhimanta Khan, was one of His intimate associates. He had borne the entire expense of Mahaprabhu’s marriage with Vishnupriya devi. He was very charitable in nature and provided medicines and treatment to the poor who fell ill. Buddhimanta was very dear to Mahaprabhu and had participated in most of His Navadvipa pastimes.

How to Reach Suvarna Vihar : One travelling from kolkata is advised to board a Krishnanagar local train from the Sealdah station. On reaching Krishnanagar, one can book an autorickshaw to directly reach these ancient sites at Godrumadvipa. ‘Suvarna Vihar’ lies in the island of Godrumadvipa and is very near to the place called Amra Ghata. 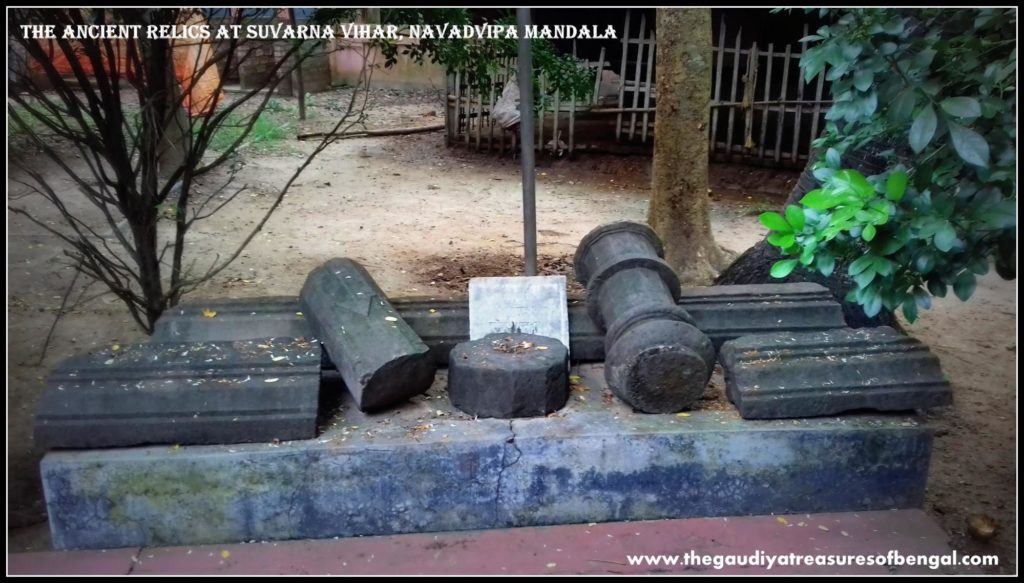 When shall I wander alone or in the company of devotees throughout Suvarna Vihar, crying with a voice choked in ecstasy ? At the feet of Lord Gauranga, I shall beg for a little service unto the divine couple and then offer my life at the shelter of Sri Radhika’s feet.

Devotees of Lord Gaurahari do not desire liberation, heavenly bliss or even entrance into Vaikuntha planets. All they hanker for is association of and service to Lord Chaitanya life after life. Though Lord Chaitanya and Lord Krishna are one and the same person ,yet the two are different when it comes to their mood, nature and their magnanimity.Along with His associates, Sri Chaitanya had manifested the most blissful , heart rending pastimes that have been ever witnessed in human history. In fact, some of the eternal associates of the Lord have experienced a greater degree of transcendental ecstasy being part of the pastimes of Lord Chaitanya, as compared to being part of Sri Krishna’s vrindavana pastimes. Lord Gaurahari freely gives what no other incarnation of the Supreme Lord has ever given before – the ecstatic pure love of God. Thus the devotees exclusively devoted to Lord Chaitanya’s lotus feet hanker to gain entrance into the spiritual abode of Navadvipa, where Sri Sacinandana Gaurahari eternally performs His blissful ecstatic pastimes. The realm of navadvipa is eternally pervaded with the transcendental mood of audarya (magnanimity).

Thus both Vrindavana and Navadvipa are spiritual realms which award a spiritual practitioner with the highest forms of transcendental ecstasies. The Madhurya (sweetness) of Vrindavana and the audarya (magnanimity) of Navadvipa are the highest spiritual perfections that exist in the creation. Srila Bhaktivinoda Thakura mentions in Jaiva dharma that a spiritual practitioner who worships Lord Krishna during his sadhana (spiritual practice) achieves Vrindavana at the end of his life, whereas one who worships and meditates upon Lord Gauranga, achieves the spiritual realm of Navadvipa. Whereas one who meditates upon both of them during his sadhana, achieves both of these realms at the end of his life, simultaneously.

But even in order to achieve Lord Krishna at the end of His life, one is advised herein to seek shelter of Lord Chaitanya.In the navadvipa dham mahatmya, Pushkara tirtha reveals:

– even after chanting the holy names of Radha and Krishna for millions of years, a rogue is not able to develop any taste for Harinama. But if he lovingly worships Sri Chaitanya Mahaprabhu, his wicked mentality quickly vanishes and he soon achieves the lotus feet of Radha and Krishna in Vrindavana.

So just as Bhaktivinoda Thakura mentions in this verse, one should surrender unto Lord Chaitanya and beg for His causeless mercy in order to achieve the lotus feet of Sri Radha and Krishna.