Purport –
Lord Jagannatha at Rajapur, is non different than Lord Jagannatha at Puri. Srila Bhaktivinoda Thakura re-establishes this fact by citing the history of this temple of Rajapur in his book ‘Sri Navadvipa Dham Mahatmya’. Long ago, in the seventh century, there appeared one demoniac king in Orissa, named Raktabahu, who desecrated temples, and terrorized the hearts of the pious. The devotees at Jagannatha puri became exceedingly afraid of the king’s evil intentions and they took shelter at the lotus feet of the Lord. That night the master of Nilachala, Lord Jagannatha Deva, appeared in the dream of the head priest, and assured him that there was no one in the entire creation, who could harm His divine form or His temple.Just by His mere will , He could keep the miscreants away from that place.Hence the priest need not worry. Yet, The lord wished to reciprocate with the feelings of His beloved devotees so as to increase their love for Him manifold.So He asked the priest to inform all the devotees to remove the deities of Lord Jagannatha, Baladeva and Subhadra Maharani, the very next morning and carry them to Bengal. The Lord also informed the priest that the deities should be carried taking the path through the jungle.The main road should be avoided, as Raktabahu was on his way taking that route.

Upon hearing this, the sabara devotees, who serve by carrying the Lord during the various festivals like Rathayatra, snana-yatra,etc, immediately started making the necessary arrangements for the Lord’s journey.Carrying the Lord, they travelled through the day before the night set in.On their way they offered unto the Lordships whatever fruits, flowers and leaves they could obtain from the forest.They journeyed like this for twelve continuous days before they reached Simantadvipa. That night, The Lord appeared in the dream of the Sabara leader, and expressed His desire to settle down at that very place. Understanding the Lord’s will, the sabara devotees made appropriate arrangements for the Lord to be established at Rajapur. These Sabara devotees went onto serve their beloved Lord at Rajapur ,for generations to come and all of them achieved the perfection of their lives. There is a place in Simantadvipa ,known as Sabara-danga, that exists even today. It is believed that these Sabaras had settled down in this very village during the seventh century.

How to Reach : The temple at Rajapur, is located on the island of Simantadvipa, which embodies the devotional mellows of Sravanam or hearing the glories of the Lord. Maa Parvati had once performed severe austerities at this place, with an intense desire to have darsana and mercy of Lord Gaurahari.Finally, on receiving His darsana, she became overwhelmed with ecstasy, and smeared the dust of the Lord’s lotus feet upon her simanta (the center parting line of her hair). As a result this island came to be known as Simantadvipa.
One can directly take an auto/rickshaw from the Mayapur ghat to reach the Jagannatha temple of Rajapur. 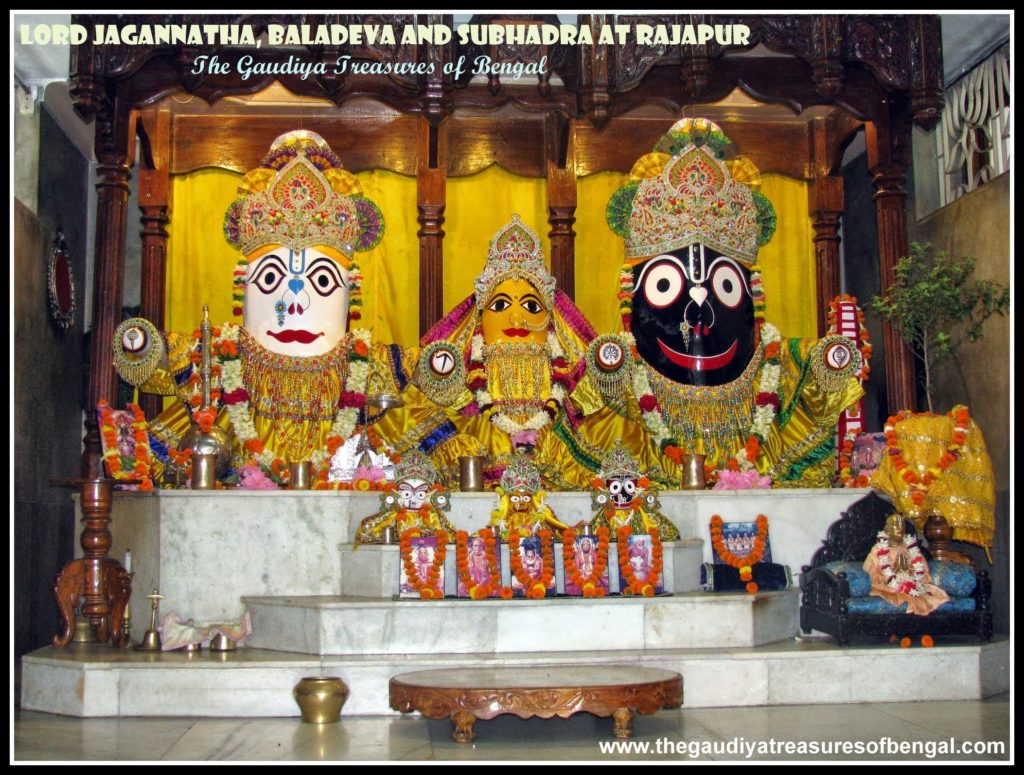 Translation –
I shall behold the splendour of simantadvipa which lies on the bank of the Ganges, towards the north-west corner of Mathura. It is here that Parvati devi had eagerly placed the dust of Lord Gauranga’s feet upon the parting of her hair.

Purport –
Refer the purport to verse 24.

We do not burden any temple or spiritual/religious organization for any of our expenses. Neither are we engaged in the management/administration/governance of any temple or dham. All the expenses are borne entirely by ourselves. Hence we request you to support us generously in this sacred service.
Click on a Tab to explore
Latest BooksBookstore details
International Bookstore
See also  Ishodyan - The enchanting garden of Lord Gauranga | Sri Navadvipa Bhava Taranga