After touring various holy places, Nityananda Prabhu (Nitai) finally reached Vrindavana. Visiting His previous pastime places (ie, those of Lord Balarama), He became ecstatic and began roaring loudly. Going without any food or water, He incessantly chanted the names of Krishna and rolled upon the sacred dust of Vrindavana dham. By this time, Sri Caitanya Mahaprabhu (Gaura) had already started revealing His devotional mood in Navadvipa. Mahaprabhu (who was Krishna Himself) started to feel an intense separation from His brother Nitai (Balaram), and longed to have Him in His sankirtana. As soon Lord Nityananda realized that Mahaprabhu had begun manifesting His ecstatic mood, He at once came over to Navadvipa to assist the Lord in His magnanimous pastimes. But how Nitai Gauranga (Lord Nityananda and Chaitanya Mahaprabhu) met with each other is a fascinating pastime, as we shall read below.

But Nityananda Prabhu, on reaching Navadvipa, did not directly go to meet His beloved Lord. Instead He went and hid Himself in the house of a great devotee named Nandan acharya. Srila Vrindavana das Thakura writes that Nityananda Prabhu’s transcendental body shone with brilliant effulgent rays. He was exceedingly grave, incessantly chanting the holy names of Lord Krishna. His long arms, His enchanting eyes, and His body that was more beautiful than millions of moons, mesmerized one and all.Dressed as an avadhuta, He remained intoxicated by an intense love of God. Nandan Acharya was overwhelmed to have Him as his guest.

Sri Caitanya Mahaprabhu, being the Supreme Lord, could understand that Sri Nityananda had already arrived at Navadvipa. Mahaprabhu revealed to all of His associates that last night He had a wonderful dream. In His dream, He saw a big Ratha come and stop at His doorsteps.From the Ratha came down a beautiful person adorning a blue dhoti and a blue turban. Holding a kamandulu in His left hand, His steps swayed to and fro in ecstasy. He kept enquiring about the whereabouts of Nimai Pandita’s residence. When Mahaprabhu asked who He was, He laughed and replied that the two of them would meet the next day. Saying thus, Sri Caitanya became absorbed in the mood of Haladhara Balarama. Then He ordered Srivasa Pandita and Haridasa Thakura to search all over Navadvipa and bring that great personality (whom Mahaprabhu had seen in His dream) to Him.

Srivasa Pandita and Haridasa Thakura searched all the houses of Navadvipa. They searched the residences of Vaishnavas, sannyasis, Grihastas, atheists, etc .But inspite of searching for nine continuous hours they could not find Lord Nityananda. When Caitanya Mahaprabhu heard of this, He smiled and understood the mysterious deep nature of Lord Nityananda. Only by the mercy of Sri Gaurachandra, can one understand the glories of Lord Nityananda. Taking His associates along, Mahaprabhu arrived at Nandan acharya’s house.

Seeing the wonderful effulgent smiling form of Nityananda Rama, who was seated on a throne, all the devotees including Lord Caitanya paid Him their humble obeisances. Transcendental flowers and marks of Tilaka decorated His beautiful body. Even the moon hankered to catch a glimpse of His enchanting form. Vrindavana Das Thakura remarks that even the heavenly drink of ‘Amrita’, drinking which grants one immortality, is nothing as compared to beholding the smiling form of Nityananda Rama.

Seeing Gauranga Sundara, the very Lord of His Life, Nityananda prabhu remained speechless.Nityananda Prabhu as if drank the beautiful form of Gaura Raya with His eyes.Mahaprabhu wanted to reveal the deep transcendental mood of Nityananda prabhu to everyone. Hence He ordered Srivasa Pandita to read out the below shloka from Srimad Bhagavatam, which talks about how adorning a peacock feathered ornament upon His head, blue karnikara flowers upon His ears, a yellow garment which shone as brilliantly as gold, and the Vijayanti garland upon His neck, Lord Krishna entered the forests of Vrindavana and exhibited His transcendental form as the greatest of the dancers. When He danced He beautified the ground with marks of His lotus footprints. Krishna filled the holes of His flute with nectar of His lips when he played upon it. The cowherd boys all sang His glories.

As soon as Nityananda Prabhu heard these wonderful verses, He felt greatly ecstatic and fell down onto the ground unconscious. After sometime, when He regained His senses, He began crying piteously. His loud roars as if penetrated the coverings of the universe. Devotees became anxious when Nityananda Prabhu fell onto the ground again and again. They feared that His bones must have got broken upon impact. Rolling on the dusty grounds, He sanctified mother earth with His tears. Beholding the beautiful form of Lord Gaurahari, He released deep breaths. At times He cried, at times He laughed, at times He danced raising His hands in the air.

Witnessing the wonderful ecstatic symptoms exhibited by Lord Nityananda, all the devotees remained awestruck. Lord Caitanya, along with His associates, shed tears of joy. Taking Lord Nityananda in His lap, Mahaprabhu, as if regained His life. It was as if Lakshman rested in Lord Ramachandra’s lap. The emotions exhibited by Nitai Gauranga, the two brothers, cannot be described in mere words.The same Ananta sesh, who holds the entire creation upon His hoods, now peacefully rests within the laps of Sri Gaurachandra. Mahaprabhu exclaimed that the divine symptoms exhibited by Lord Nityananda on that day were the very essence of the vedic scriptures. He added that anyone who chants the glories of Nityananda prabhu, receives the greatest treasure of Krishna prema. The Lord incessantly kept chanting the great glories of Doyal Nitai. Some said the two brothers resembled Rama-lakshman while some said they looked like Krishna and Arjuna. Anyone who hears this beautiful narration of the meeting of Nitai Gauranga, is relieved from the clutches of material nature and receives the pure love of God.Srila Vrindavana das thakura concludes this chapter by singing –

Translation – Anyone who desires to get delivered from the bondings of this material world, and dive into the ecstatic ocean of Lord’s love, should meditate upon and worship Lord Nityananda.

How to Reach Nandan Acharya’s sripat:

Mayapur lies within Antardvipa, the sacred island at the junction of Jalangi (yamuna) and the Ganges. Mahavana, situated at the very center of Vrindavana, the highest spiritual realm, is non different to Mayapur. Navadvipa is like a beautiful lotus flower with its eight islands assuming the shape of eight petals.Antardvipa, the best of the islands, is situated as the central whorl of this lotus like transcendental abode.One travelling from kolkata is advised to board a Krishnanagar local train from the Sealdah station. On reaching Krishnanagar, one can book a toto (auto) to take him to the Krishnanagar Ghat. From the Krishnanagar Ghat(bank) one can avail a five minutes ferry ride to reach the Mayapur Hulor Ghat. From the Mayapur Ghat one can take a toto/auto/rickshaw to directly reach the residence of Sri Nandan Acharya, where Nitai Gauranga had reunited with each other.

Accommodation – One can choose to avail the good facilities at Iskcon Mayapur where one can honour nice prasadam as well.Please make sure to book your rooms well in advance. 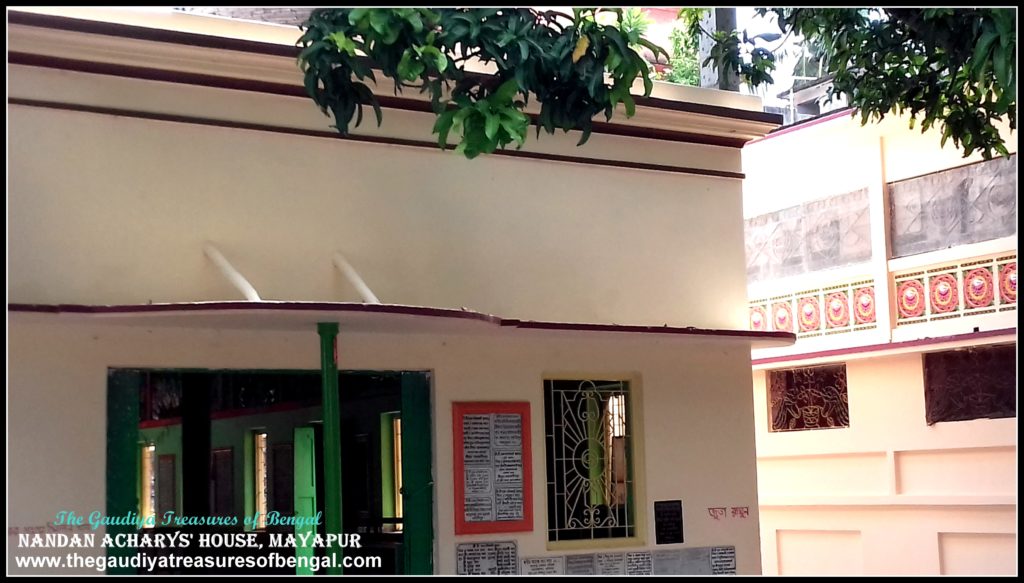