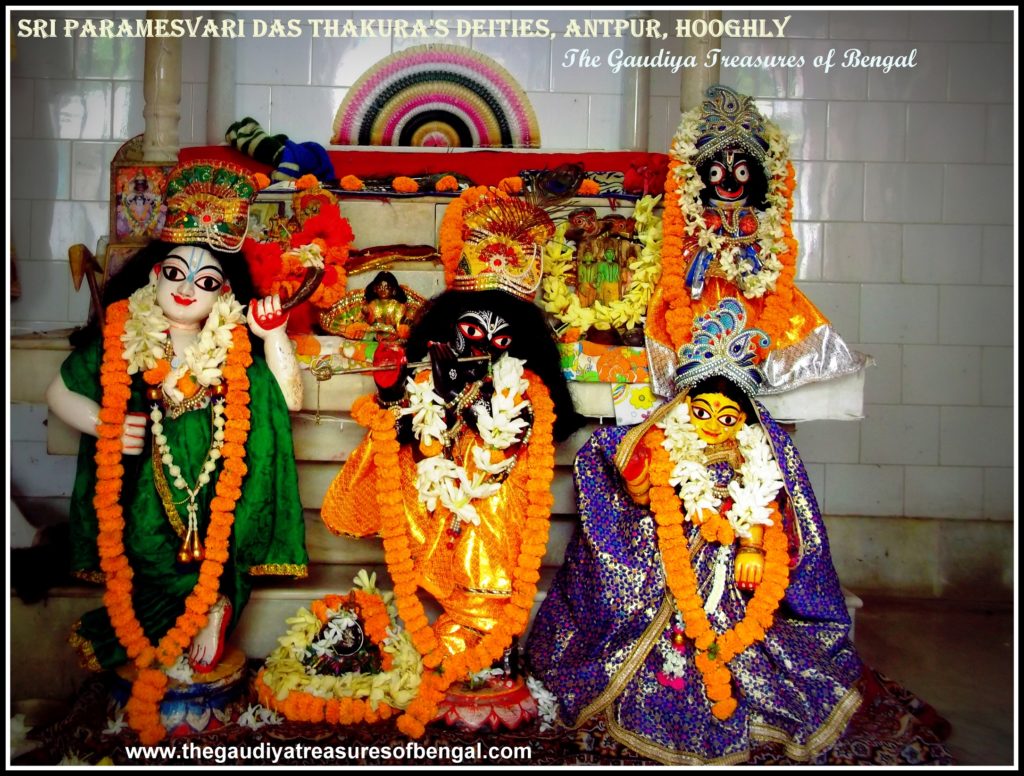 Srila Krishnadasa Kaviraja mentions in the Adi Lila of his Caitanya Caritamrta, that Sri Paramesvari das Thakura ( sometimes also referred to as Paramesvara Das) was the fifth of the twelve cowherd boys (Dvadasha Gopala) who had appeared in order to assist Sri Gaura Nitai manifest their magnanimous pastimes. He was completely surrendered unto the lotus feet of Nityananda Prabhu. It is further revealed, that anyone who remembers his name or contemplates upon his pastimes, achieves the love of Krishna very easily. So it is for the ultimate benefit of one and all that today we are going to discuss about his wonderful pastimes and glorify this great Vaishnava saint.

From Sri Gaura Ganoddesha Dipika, we come to know that Sri Paramesvari Das Thakura was the incarnation of the cowherd boy ‘Arjuna’ (not to be confused with Arjuna – the Pandava), an intimate friend (Priya Narma sakha) of Krishna and Balarama in Vrindavana. 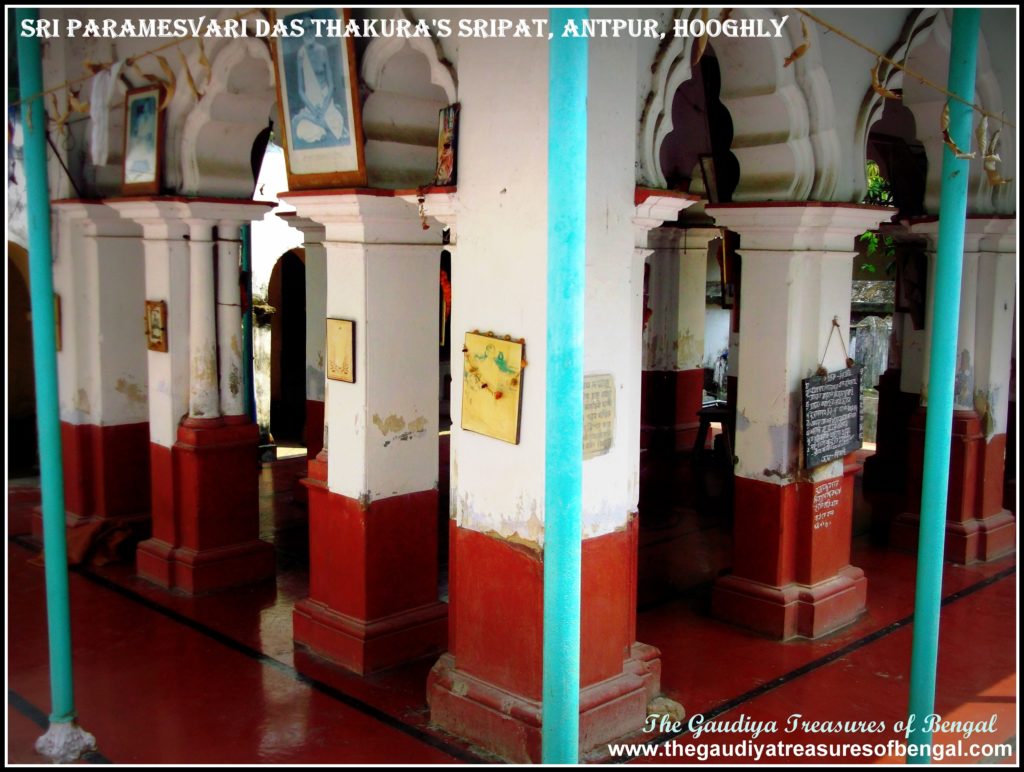 The temple priest informed ‘The Gaudiya Treasures of Bengal’ that the deity of Gopinatha, installed in this temple, has originally been the worshipable deity of Sri Nityananda Prabhu. After Nityananda Prabhu had wrapped up His earthly pastimes, Srimati Jahnava devi handed over this deity unto Sri Paramesvari das and instructed him to setup his preaching center here at Antpur.The deity of Radha Gopinatha is being worshipped here at Antpur ever since. A beautiful enchanting deity of Lord Balarama, who is overwhelmed with the mood of Nityananda prabhu, has been later installed here and is also currently being worshipped in this temple. Antpur, during those days (500 years back), used to be covered with dense forests and Rattan trees.The land was renowned to be a haven for miscreants.Thus Antpur qualified as the perfect place to set up a preaching center and propagate Mahaprabhu’s movement to deliver the sinful and the fallen.

Sri Paramesvari das belonged to the family of vaidyas (physicians). For the past four hundred years professional brahmins were hired to perform the deity worship here at Antpur. But the present temple priest, Sri Manik Thakura, who happens to be a descendant of Paramesvari Thakura’s family, has now voluntarily taken up the service.He ,along with his family, now resides and serves in this temple full time. Sri Manik informed us that being attracted to the deities he left his home and came over to Antpur when he was just 13 years of age. He has been serving over here since the last 50 years now. 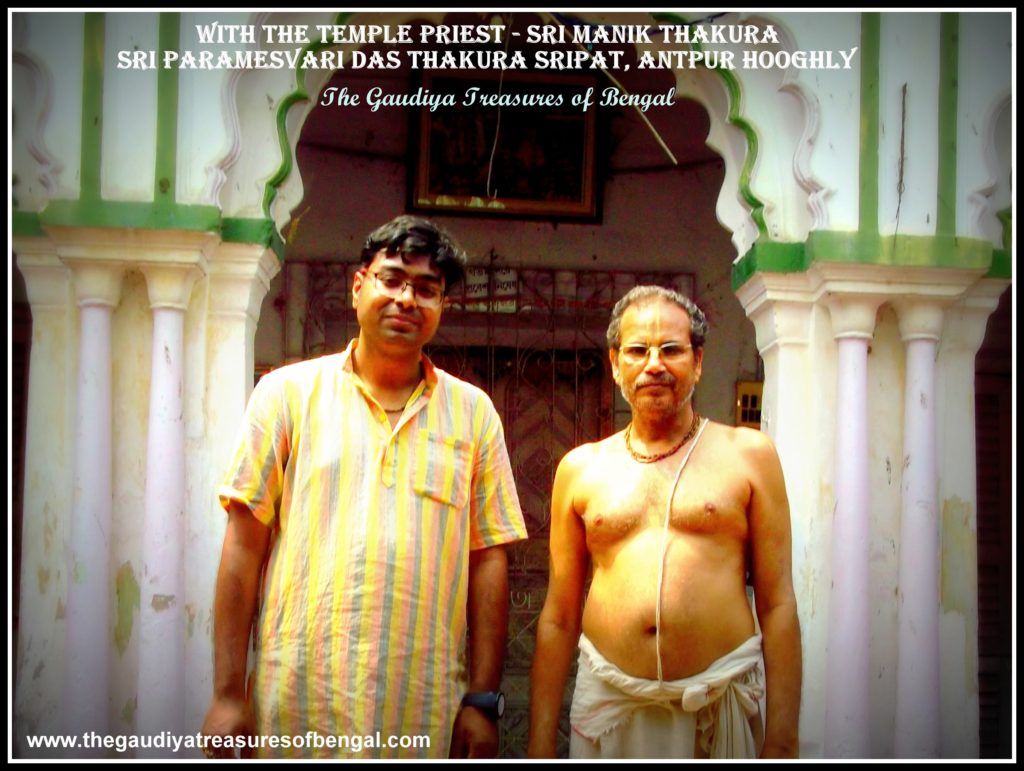 When Mahaprabhu ordered Nityananda Prabhu to return to bengal in order to preach Krishna consciousness, Sri Paramesvari das accompanied Him. Paramesvari Thakura was present when Nityananda Prabhu had performed His ecstatic pastimes at Raghava Bhavan (refer – ‘Raghava Bhavan ,Panihati’). He was also present during the Dahi Chida festival of Panihati, when Raghunatha Das Goswami was mercifully punished by Lord Nityananda (refer – ‘Srila Raghunatha Das Goswami Sripat, Krishnapur Thakurbari (Near Bandel)’).
After the disappearance of Nityananda Prabhu, Paramesvari das served under the guidance of Jahnava Mata at Khardaha. He became her very dear servant. When Sri Srinivasa Acharya had arrived at Khardaha to beg permission from Jahnava devi, so that he could travel to Vrindavana, Sri Paramesvari das thakura escorted Srinivasa to her presence (‘etha Paramesvari das Srinivas-e, laiya gelen sighra prabhura abashe’ – Bhakti Ratnakara).Sri Paramesvari das, along with Uddharana Datta Thakura, accompanied Jahnava mata on her travels to Vrindavana.Later, on the orders of Jahnava devi, Sri Paramesvari Thakura took charge of transporting the deities of Radharani to Vrindavana , so that they could be installed beside Govinda dev jiu.
He was also present during the grand festival of Kheturi organised by Narottama Das Thakura.

It is stated in Bhakti Ratnakara, that Sri Paramesvari das Thakura played a very important role in Govinda Kaviraja being awarded with this title of ‘Kaviraja’ (king of poets). It was he who had originally suggested that Govinda Kaviraja’s poem be heard in the assembly of Vaishnavas.

Subsequently, Srimati Jahnava devi ,instructed Paramesvari das thakura to settle down at Antpur (as we all know) and set up his preaching center over here. He also entrusted unto his care the worshipable Radha Gopinatha deities of Nityananda Prabhu (as discussed before). 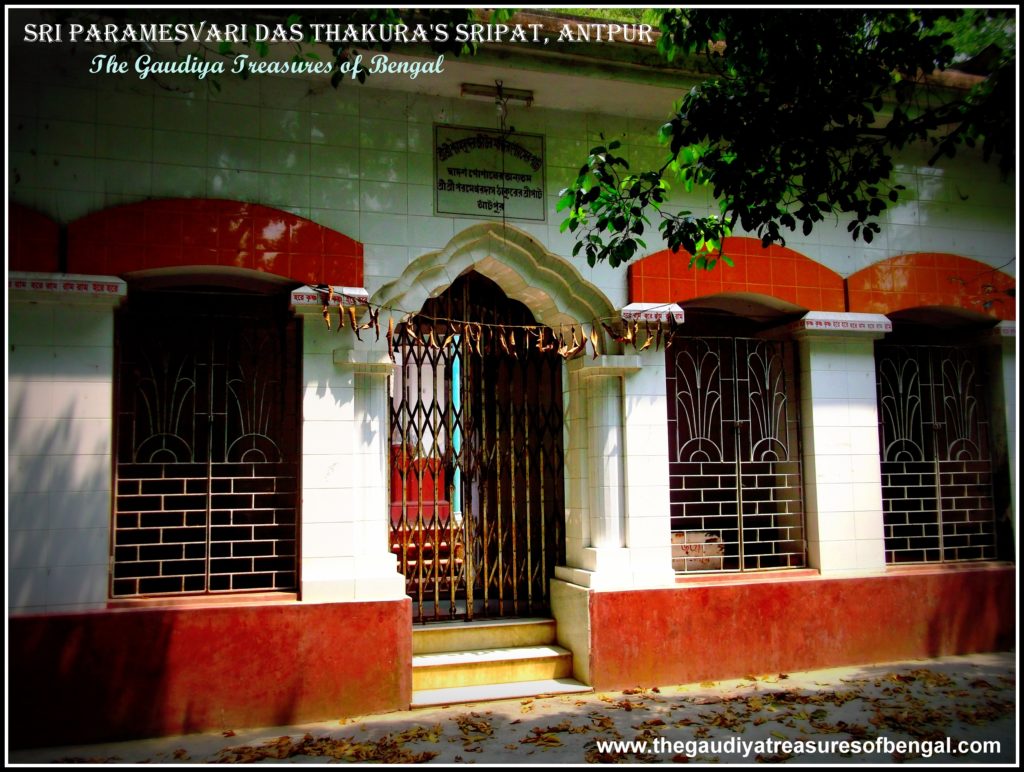 It is mentioned elsewhere that once, Sri Paramesvari Das Thakura was engaged in an ecstatic Harinama sankirtana at Mahesh ,the Sripat of Kamalakara Pippalai (refer – ‘Sri Jagannatha Temple of Mahesh, Serampore’).Some miscreants became very envious upon seeing the joy of the devotees. Being enraged they picked up a dead jackal, which was lying on the road, and threw it in the midst of the devotees.The Vaishnavas did not take offense and continued with their transcendental activities. However Sri Paramesvari das felt compassionate upon seeing the dead jackal and by his merciful glance brought it back to life. He not only revived the jackal but also made him chant the holy names of Lord Hari.The miscreants fled upon seeing this miracle.

Here at Antpur, we stumbled upon a small extract of a poem that had been composed by Sri Paramesvari das Thakura ages ago. Though the entire poem has now been lost, yet a small portion of it has been preserved in this temple. We are presenting it below for the pleasure of the devotees –

Sri Caitanya Mahaprabhu is my very life and Lord Nityananda is all the wealth i possess
Apart from you, there is no other means of deliverance
I was like that filthy worm who obtained great pleasure in being obsessed with money
But by your causeless mercy, all my false ego and arrogance has now been completely destroyed
… 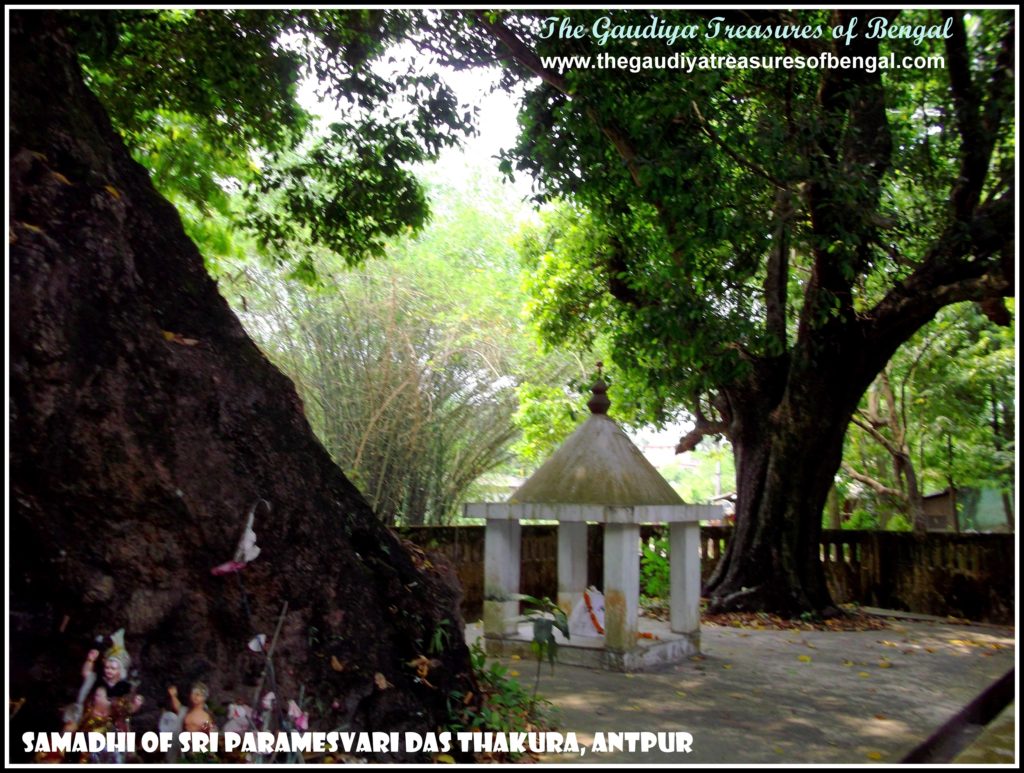 We worship the lotus feet of our spiritual master ,whose causeless mercy has empowered us ineligible fools ,to gain entrance and take up service in this exalted land of Antpur. We seek shelter of this holy land, and pray that its glories remain forever imprinted in our heart.‘The Gaudiya Treasures of Bengal’ offers millions of obeisances and humbly prays to Sri Paramesvari das Thakura that we advance in our Krishna consciousness, develop attachment unto the lotus feet of Lord Gauranga and are able to serve Sri Guru & Vaishnavas, by our honest and sincere efforts. We seek his blessings and compassion , in successfully rendering this humble service of reciting the pastimes and revealing the pastime places of the Supreme Lord and His beloved associates.We shall consider ourselves greatly fortunate and our existence meaningful if Lord Gaurahari and our dear spiritual master are kindly pleased with our endeavours.

One travelling from Kolkata is advised to board the Tarakeswar local from the Howrah station. One needs to get down at the stoppage known as ‘Haripal’. Haripal is hardly an hour ride from Howrah. From Haripal one needs to catch a trekker or the bus number 10, to directly reach the Sripat of Paramesvari das Thakura at Antpur (Antpur was known as ‘Bishkhala’ in the ancient days). The concerned temple is locally renowned as ‘Shyamer path’. Please note that there is another very old Radha-Krishna temple in the vicinity that has been established by the Mitra family. Please do not confuse the Sripat of Paramesvari das Thakura (Shyamer Path) with this other temple. However if one has time, one might want to visit both of them.

Accommodation – As the place is not very far from Kolkata, it is recommended that one stay in Kolkata and then travel to take darsana of the exalted sites of Antpur.One can choose to stay at any of the hotels (there are many) in Kolkata. One is requested to contact the Antpur temple authorities to avail prasadam.