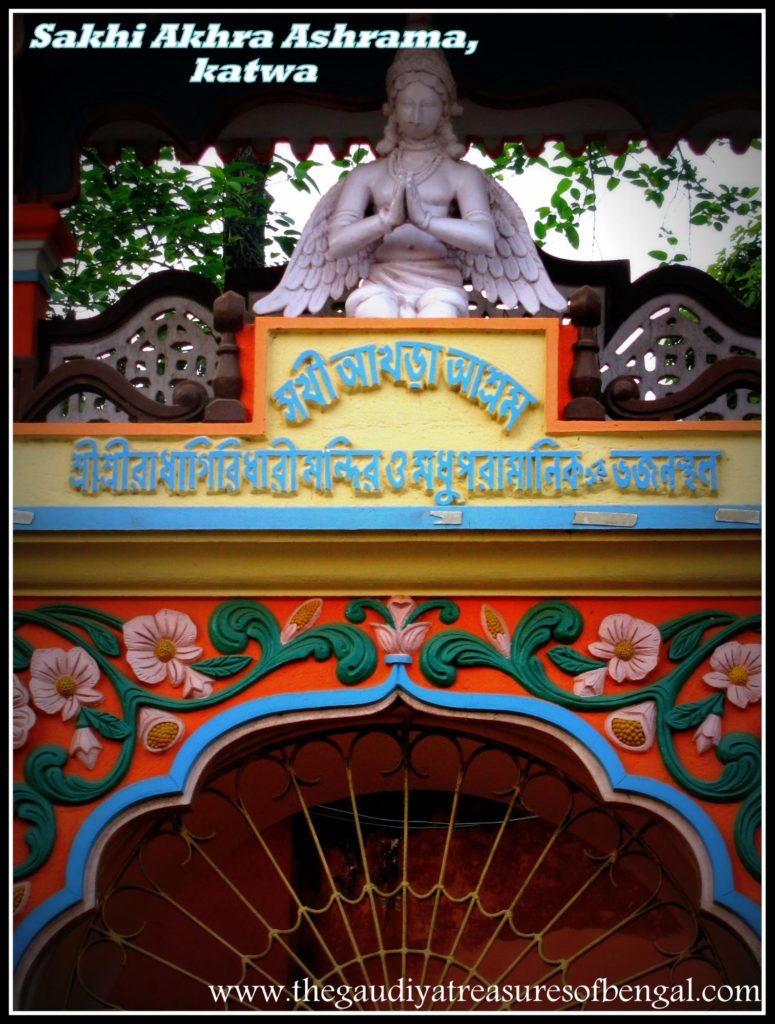 A few minutes ride from Sri Gauranga Bari (at Katwa), brought us to the house of the great devotee, Sri Madhu Pramanick ,the barber, who,keeping a stone in his heart, had shaved Sri Mahaprabhu’s hairs during His sannyasa initiation. The place is locally known as ‘Sakhi Akhra’ and is situated at Baganpara, in Katwa. Madhu wept bitterly as did all the devotees, who couldn’t tolerate the Lord of their lives relinquishing His beautiful curly hair,decorated with malati flowers ,that had previously enchanted the three worlds. That day, instead of picking up his razor, Sri Madhu, sat hanging his head between his hands and cried profusely.Madhu could realize that Sri Nimai pandita was the Supreme Lord and he requested Him again and again to reconsider His decision of accepting the sannyasa order. But Nimai remained very determined. 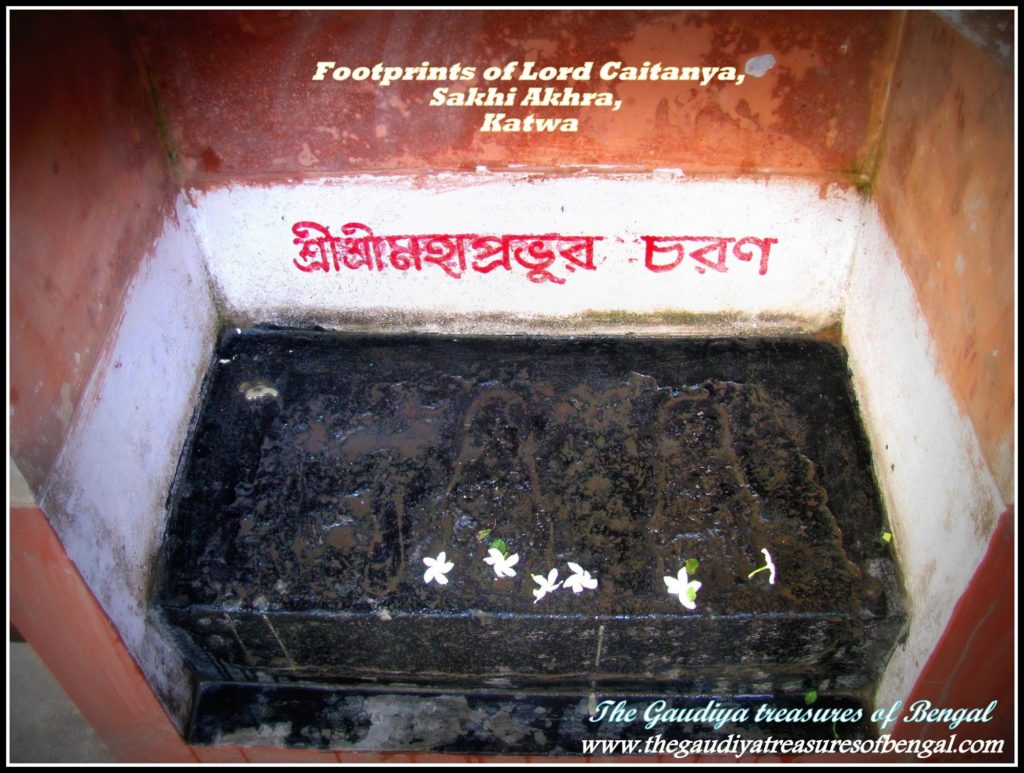 Finally, at the end of the day, Mahaprabhu’s hairs were shaved, and after performing this ghastly act, the tearful Madhu immediately threw off his razors in the Ganges and vowed never to use them again. He repeatedly cursed his profession which made him commit such a heartbreaking deed. From that day onwards, Madhu Napit (barber) became Madhu Moira (sweet maker) and spent his days meditating on the blissful form of Sri Gaurasundara. 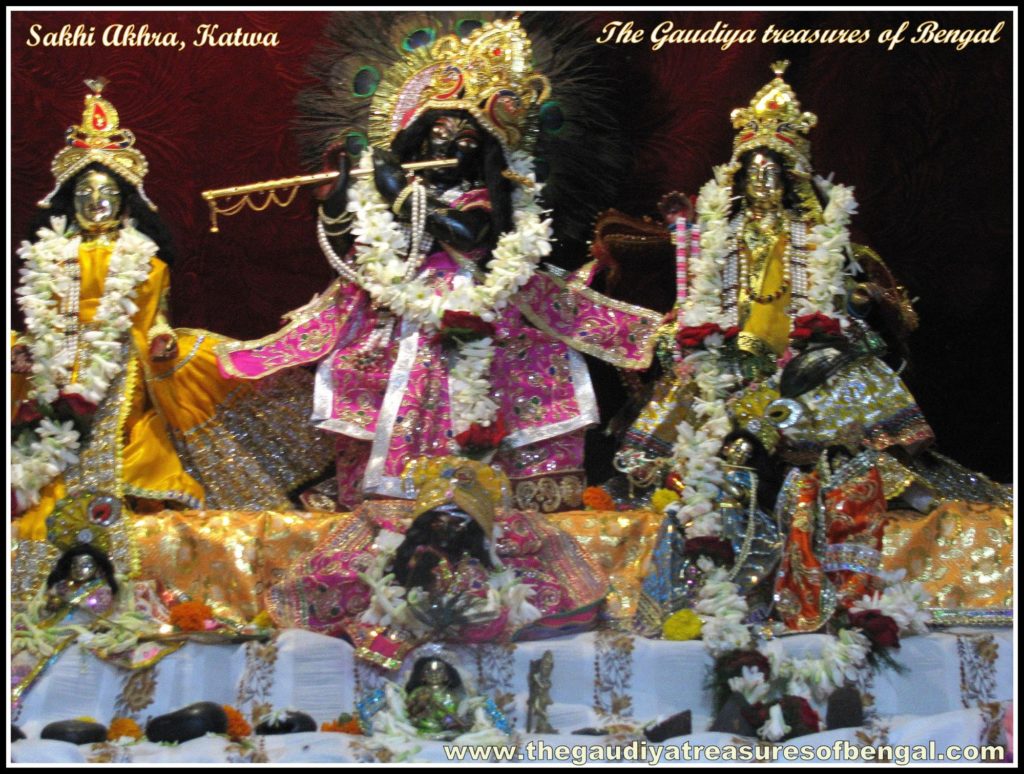 None of Sri Madhu’s descendants ever became a barber, as they considered it to be a cursed profession. ‘The Gaudiya treasures of Bengal’ has covered the pastimes of Mahaprabhu’s sannyasa in detail in a separate article entitled – ‘Sri Gauranga Bari (katwa) – Where Mahaprabhu accepted Sannyasa’. 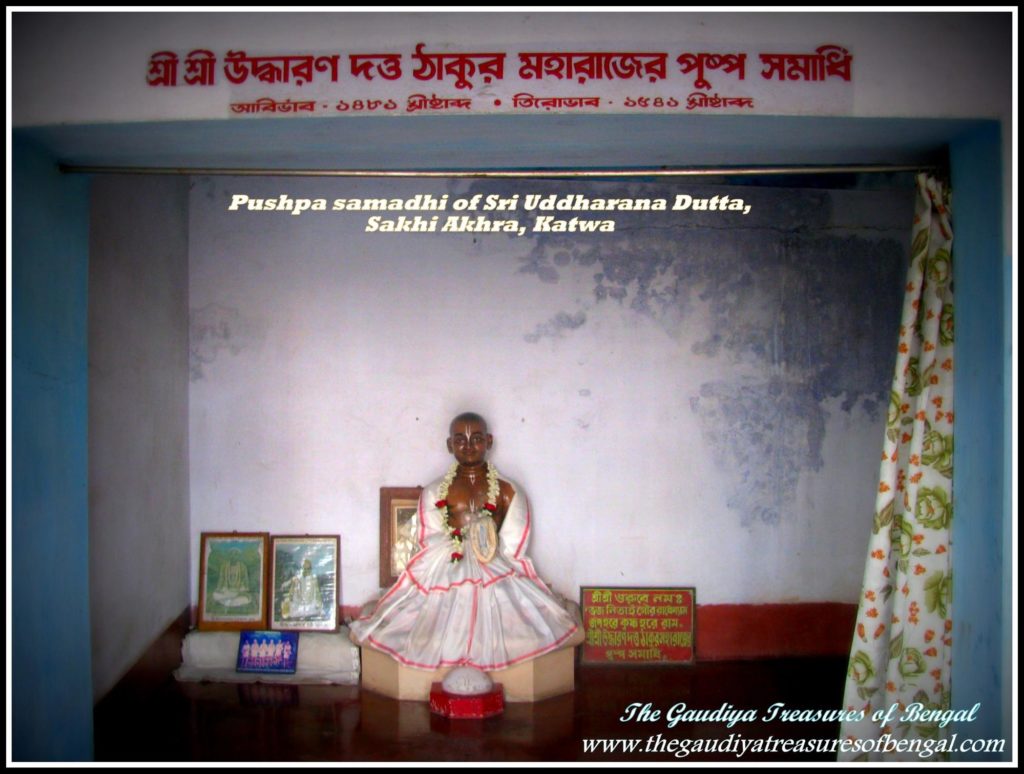 ‘Sakhi Akhra’ is a beautiful temple, adorned with trees and fragrant flowers. The local devotees are very friendly and they gladly narrated the heart melting pastimes that took place here five hundred years back.’The Gaudiya Treasures of Bengal’ prays to Sri Madhu to mercifully place his lotus feet upon our heads and bless us fallen souls ,with a tiny fraction of the ocean of devotion he possesses towards Lord Gauranga.We seek his blessings and compassion , in successfully rendering this humble service of reciting the pastimes and revealing the pastime places of the Supreme Lord and His beloved associates.We shall consider ourselves greatly fortunate and our existence meaningful if Lord Gaurahari and our dear spiritual master are kindly pleased with our endeavours. 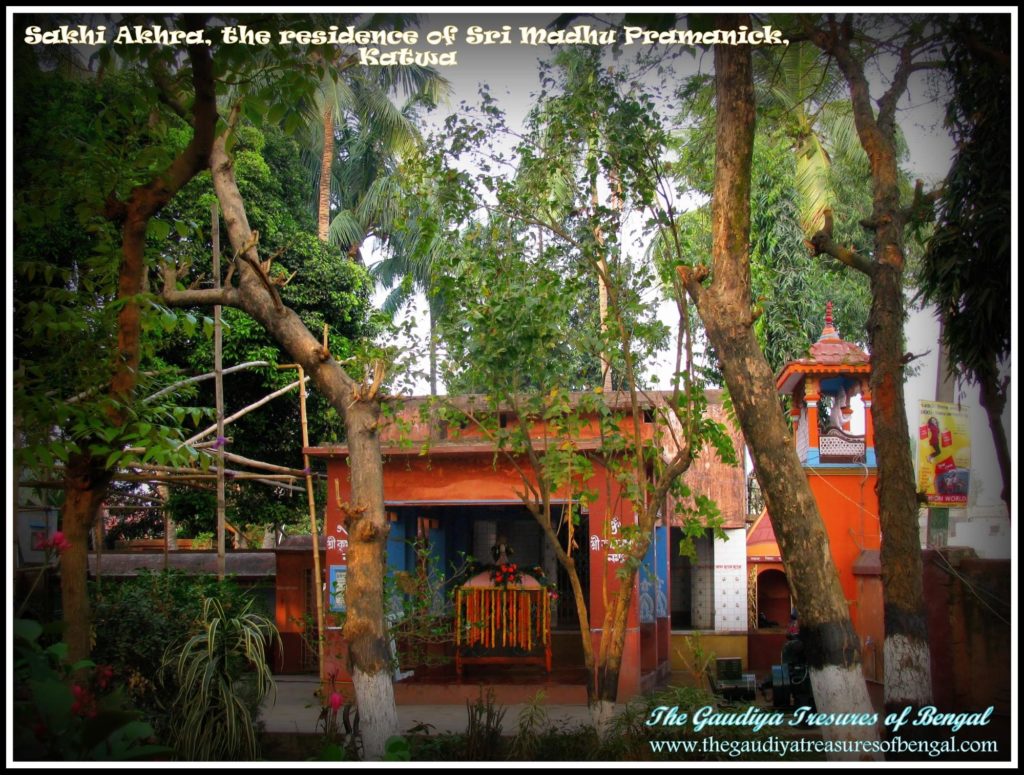 Just a few metres from Sakhi Akhra, resides the sacred bhajana kutira of Sri Madhai. This is the same Madhai, who along with his friend Jagai, had performed innumerable sinful acts while residing at Navadvipa. This is the same Madhai who had hurled broken clay pots towards Lord Nityananda and caused Him to bleed, when He had approached them to chant the holy names of Lord Hari. This is the same Madhai, whom Lord Caitanya wanted to kill with His Sudarshana chakra, and who later prayed falling down upon the lotus feet of Sri Gauranga & Nityananda to forgive him for his past misdeeds. Both Jagai and Madhai were eventually delivered by Sri Caitanya Mahaprabhu, who nullified all their sinful reactions and initiated them into a blissful life of Krishna Bhajana. By Lord Gauranga and Nityananda’s causeless mercy ,Jagai and Madhai subsequently became very elevated devotees and became prime examples of piety. They would daily bath in the Ganges and chant the holy names of the lord 2 lakh times a day. While contemplating upon the sweet pastimes of the Lord, they shed incessant tears of joy. Madhai had later moved on from Navadvipa,to a place now renowned as ‘Madhai tala’, in katwa. Madhai used to stay and perform his bhajana at this place. This is the same exalted place where Lord Caitanya had once rested on coming to katwa for His sannyasa initiation.The Madhavi tree under which Sri Gaurasundara had sat still exists at this place.

It has been mentioned in Sri Caitanya Bhagavat, that after witnessing the deliverance of Jagai and Madhai and contemplating upon the causeless mercy of Sri Caitanya deva, Yamaraja, the Lord of Justice, became absorbed in an ecstatic trance and fainted. Actually Jagai and Madhai had committed so many sinful acts in their lifetime, that it had become impossible for even Chitragupta to keep track of all of them. Sensing Yamraja’s mood, the demigods began loudly chanting the Lord’s holy names , hearing which he regained his senses. Yamaraja joined the other demigods in their ecstatic dancing sankirtana glorifying Lord Caitanya and His associates. The sankirtana spread like wildfire ,throughout the entire universe, and demigods like Lord Shiva,brahma and indra began dancing like madmen being overwhelmed with ecstatic emotions.

Yamaraja’s assistant Chitragupta, who was also very attached to Sri Krishna, joined in the celebrations. Lord Shiva’s matted hair moved up and down by the forceful movements of his body, and upon seeing his rapture, Ganesh and Kartikeya joined in the dance as well. Narada ,who was dancing next to Brahma, cried tears of joy which flowed like incessant streams from his eyes. The wonderful narration of Sri Caitanya’s deliverance of sinful Jagai and Madhai could be heard from Brahmaloka ,down to patalaloka. 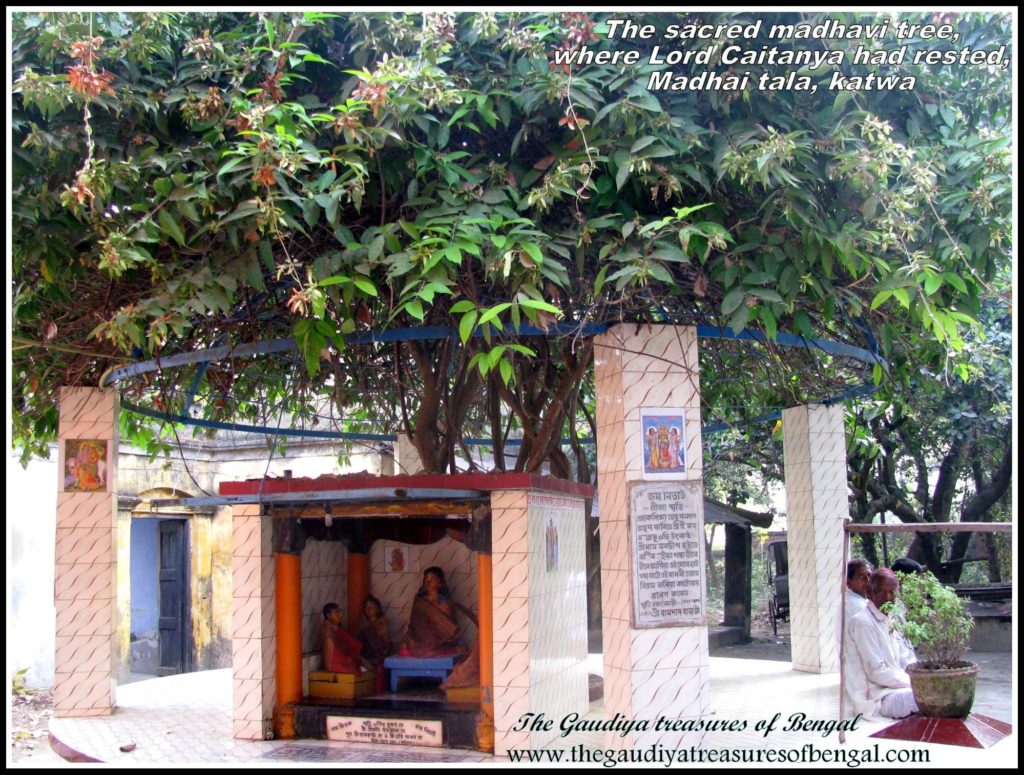 We worship the lotus feet of our spiritual master ,whose causeless mercy has empowered us ineligible fools ,to gain entrance and take up service in this transcendental abode of Katwa. 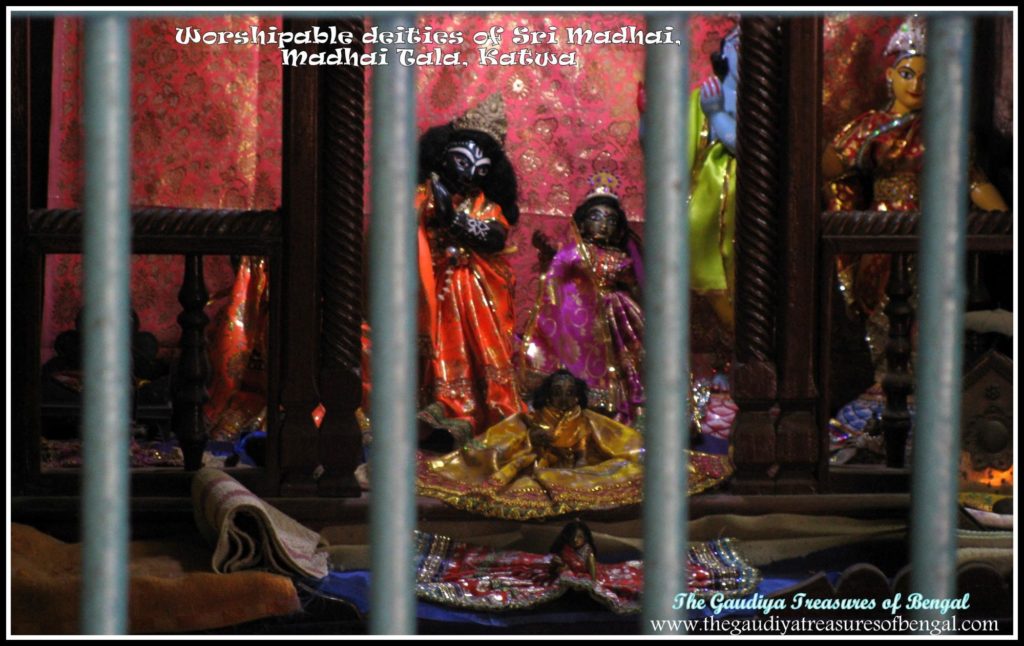 We seek shelter of this holy land, and pray that its glories remain forever imprinted in our heart.‘The Gaudiya Treasures of Bengal’ offers millions of obeisances and humbly prays to Sri Jagai and Madhai that we advance in our Krishna consciousness, develop attachment unto the lotus feet of Lord Gaura Nitai and are able to serve Sri Guru & Vaishnavas, by our honest and sincere efforts. We seek their blessings and compassion, in successfully rendering this humble service of reciting the pastimes and revealing the pastime places of the Supreme Lord and His beloved associates. We shall consider ourselves greatly fortunate and our existence meaningful if Lord Gaurahari and our dear spiritual master are kindly pleased with our endeavours. 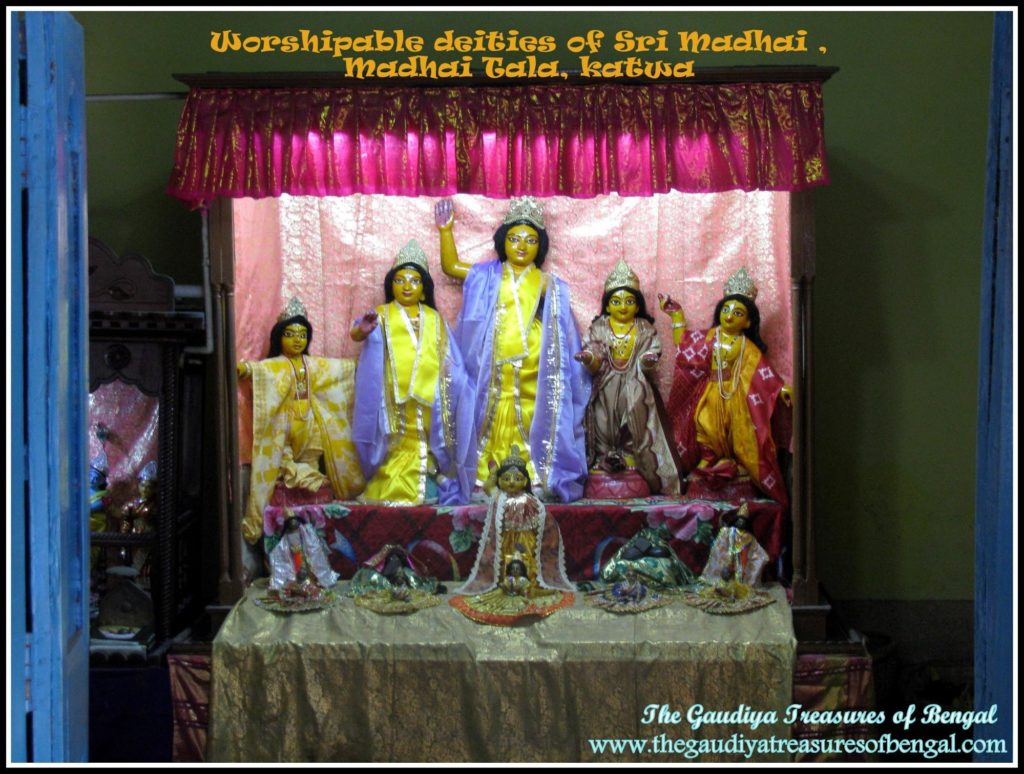 Madhai Tala is presently under the care and maintenance of the pathbari ashram.

You can take a train from Howrah/sealdah station to reach the Katwa junction. The journey takes around 3.5 hours. On reaching there, you can take a rickshaw to directly reach Sakhi Akhra or Madhai Tala.

We, from ‘The Gaudiya Treasures of Bengal’ ,had visited these sacred sites during our stay at Katwa. It was here in this holy land of Katwa that Sri Caitanya Mahaprabhu had accepted His sannyasa initiation from Keshava Bharati 500 years back, and is thus an exalted pilgrimage destination for all the Gaudiya Vaishnavas.This place was initially known as ‘Kantaka Nagara’,from which the name ‘Katwa’ had later evolved. The transcendental land of Katwa is a witness to several intimate reciprocations between Sri Gaurasundara, the Supreme Lord, and His beloved associates.

Accommodation – One can choose to stay at Hotel Srabani in Katwa which is owned and governed by the local municipality. Or else, Navadvipa is hardly an hour and a half ride from Katwa. So the devotees can also choose to stay at Navadvipa / Mayapur and then travel to take darsana of Sakhi Akhra and Madhai Tala.
If one stays in Katwa, one can avail prasadam at the ‘Gauranga Bari temple’. Else if one stays in Navadvipa, then he/she can honor prasadam at Iskcon Mayapur or any of the Gaudiya Mathas. 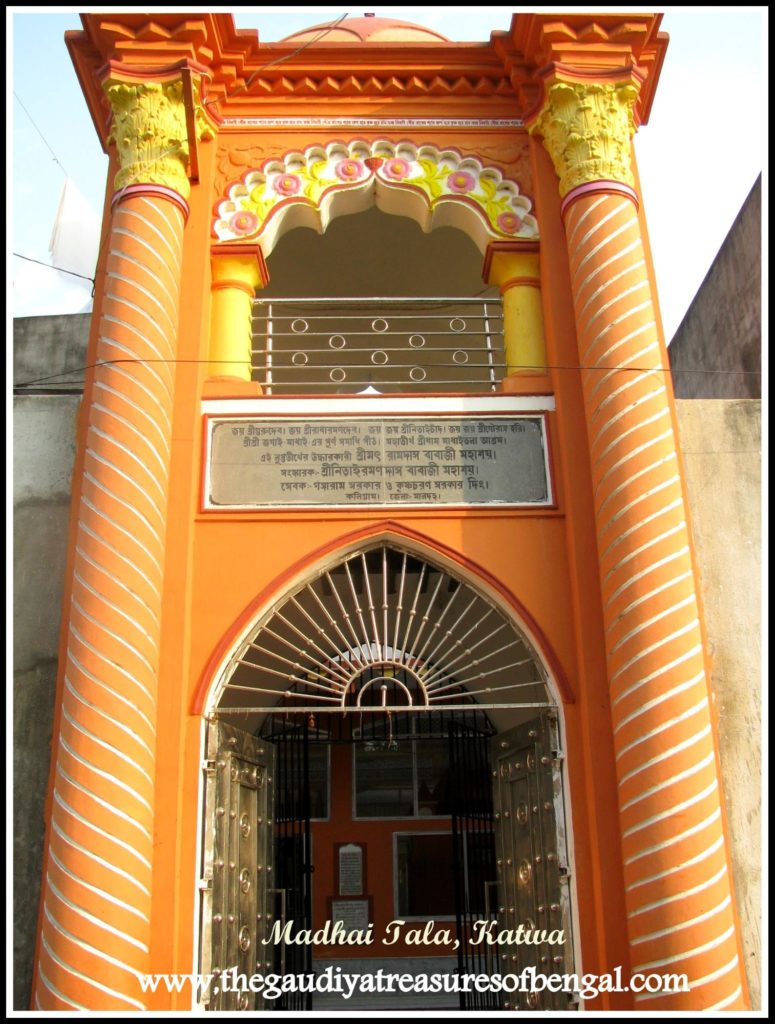