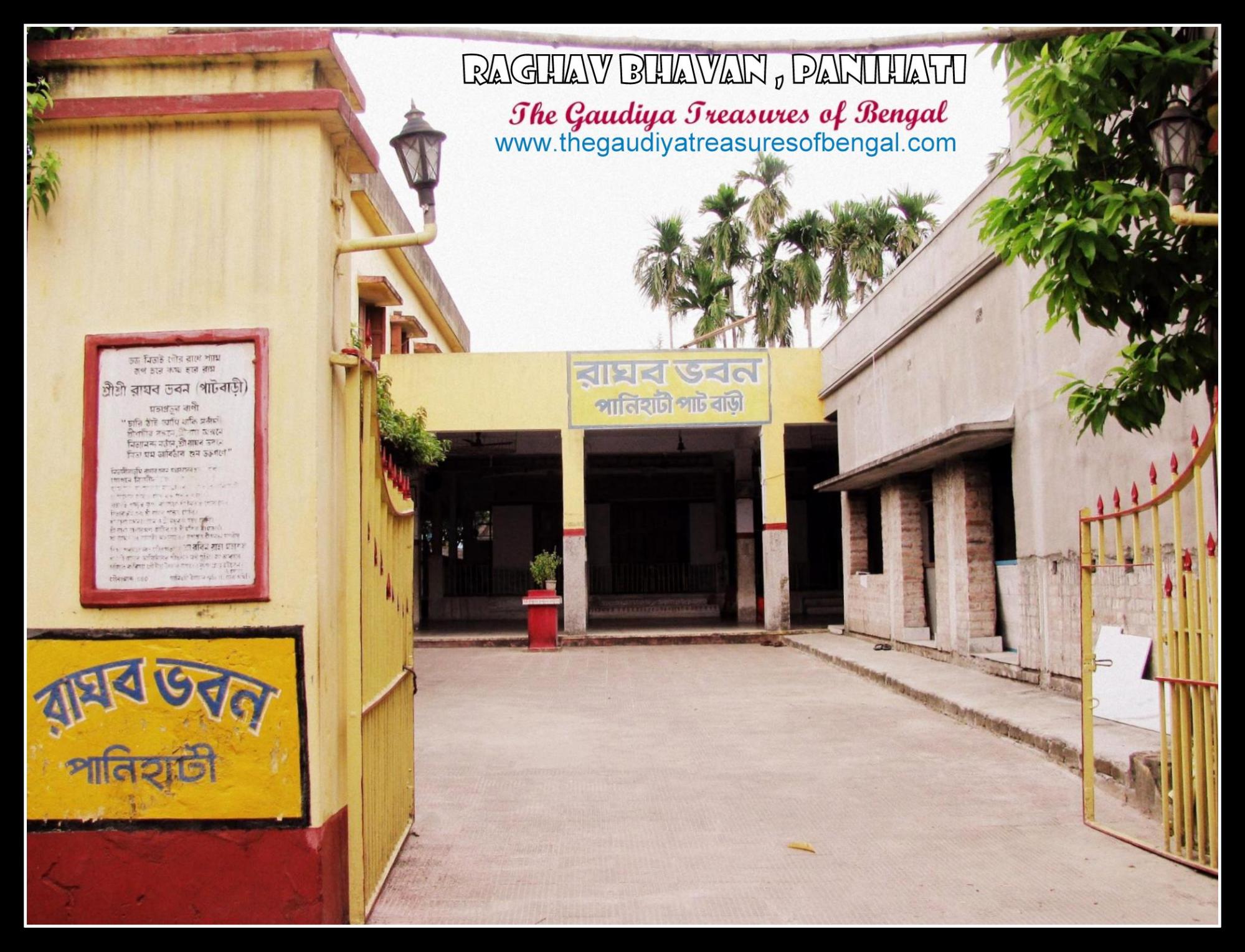 Sri Kavi Karnapura notes in his Gaura Ganoddesha Dipika that:

Raghava Bhavan ,the residence of Sri Raghava Pandita and Damayanti, is renowned all over the three worlds as the eternal residence of Sri Gaurahari (As described below). Lord Gaura Nitai have manifested their innumerable heart rending pastimes over here at Raghava Bhavan (500 Years ago). Located on the bank of the Ganges at panihati, Raghava Bhavan is very well connected to Kolkata, via road, railways and waterways.

In Krishna’s Vrindavana Pastimes,mother Yashoda would order Dhanishta Gopi to carry Krishna’s food remnants to Srimati Radharani .Radharani would then relish the remnants (prasada) of Her beloved Lord.

Similarly, in Mahaprabhu’s pastimes, Lord Caitanya who would always remain immersed in the mood of Srimati Radharani, would lovingly accept the prasadam brought to Him by Sri Raghava pandita, the incarnation of Dhanishta Gopi. In Caitanya Caritamrta, it has been revealed that Sri Raghava Pandita was an intimate associate of Lord Caitanya and is said to have been the seventh branch of Mahaprabhu’s desire tree of devotional service.

After accepting His sannyasa, Lord Caitanya had moved over to reside at Jagannatha puri. Every year, during the Ratha yatra festival, almost all the devotees from Bengal ,led by Sivananda sen, would travel to Puri to reunite with Lord Gaurasundara once again.Srimati Damayanti Devi would cook innumerable items for Mahaprabhu with her love and devotion, and thereafter pack these in separate bags. Raghava Pandita, would then carry these bags to Puri during his annual visit and offer them to Lord Caitanya. These bags of delicious food items came to be subsequently known as Raghavera Jhali (the bags of Raghava Pandita) and they find a very special mention in Sri Caitanya Bhagavat and Sri Caitanya Caritamrta.

Sri Krishnadas Kaviraja conceded in Caitanya Caritamrta that it was impossible in one’s lifetime to list down all of the wonderful eatables ,contained in ‘Raghavera Jhali’ (kahite na jaani nama e-janme yahara, aiche nana bhakshya-dravya sahasra prakara…). It was the love and devotion of both brother and sister, that made these foodstuffs even more tasty.Some of these nectarian food items were – amra-kasandi, ada-kasandi, jhala-kasandi, nembu-ada, amra-koli, amsi, ama khanda, tail amra ,ama-satta,etc. Sri Caitanya honored and relished them for a continuous year until Raghava Pandita brought fresh food items the next Rathayatra. A lot of emphasis has been given over here ,to the Bengali food delicacy named ‘sukta’, which Mahaprabhu is said to have preferred even over pancamrita (a preparation of ghee,honey,milk,etc). 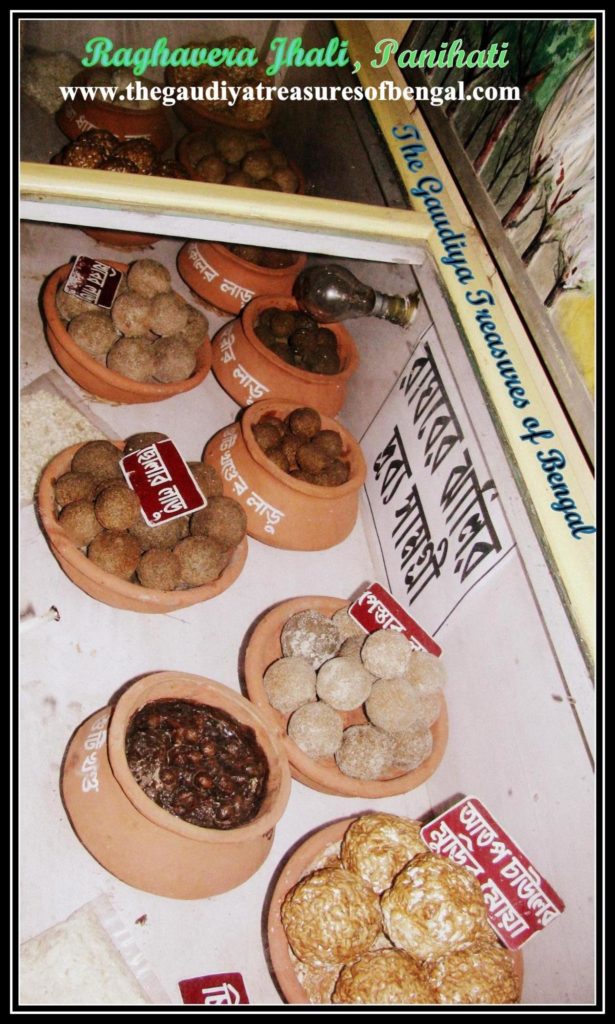 The pastimes at Raghava Bhavan :

Lord Caitanya has proclaimed that He eternally resides and manifests His ecstatic pastimes at the following four places – the house of mother Saci (sacira mandire) , wherever Nityananda prabhu dances (Nityananda Nartane), during sankirtana at the house of Srivasa pandita (srivasa kirtane) and the residence of Raghava Pandita (Raghava bhavane).

‘The Gaudiya Treasures of Bengal’ considers itself exceedingly fortunate to have been able to visit and seek blessings at this exalted dham. In Caitanya Bhagavata , Srila Vrindavana das Thakura mentions how Sri Caitanya Mahaprabhu compared His visit to Raghava Bhavana as taking a refreshing bath in the holy Ganges. Simply by seeing the blissful face of Raghava Pandita, Mahaprabhu used to forget all His distresses.

When Nityananda Prabhu and His associates returned to bengal (from Puri), they became guests at the house of Raghava (sometimes also spelt as Raghav or Raghab) pandita. Staying here at Raghava Bhavana, they manifested their awe inspiring pastimes continuously for three months. A grand sankirtana took place here, in which Lord Nitai, His associates as well as the local villagers participated. Being overwhelmed with ecstatic love for the Lord, the devotees laughed, cried and rolled over the ground, being completely oblivious of their external consciousness. As the sankirtana gathered mood, the devotees began displaying their supernatural powers like lifting up trees with their hands and jumping from one place to the other defying gravity. By dint of their spiritual prowess, they could go on with almost no food and water for entire three months. Whichever direction Lord Nitai would glance, he would shower ecstatic Krishna prema without any consideration, receiving which the devotees would at once fall down unconscious.

Thereafter, Nityananda prabhu’s abhiseka was performed here at Panihati. Caitanya Bhagavat describes a beautiful pastime in which Lord Nitai ordered Raghava Pandita to offer Him a garland of Kadamba flowers.When Raghava pandita humbly replied that the Kadamba flowers were not yet in season, Lord Nitai requested him to look around his house and search for kadamba flowers. Upon searching, to everyone’s surprise, Raghava Pandita could indeed find Kadamba flowers growing upon his lime trees. He then quickly strung a garland out of these flowers and offered it to Nityananda prabhu. Such are the exalted pastimes to have taken place at Raghava Bhavana.

It was here at Panihati, on the bank of the Ganges, that Raghunatha Das Goswami, the son of the erstwhile wealthy landlord of Saptagram, Sri Govardhan Majumdar, had received the causeless mercy of Sri Nityananda Prabhu. It was Nityananda prabhu’s mercy that enabled Sri Raghunatha to later obtain shelter and service at the lotus feet of Lord Caitanya.Raghunatha went on to become one of the six Goswamis of Vrindavana and is renowned all over the three worlds for his renunciation and love for the Supreme.’The Gaudiya Treasures of Bengal’ has covered the life and pastimes of Sri Raghunatha das Goswami in detail in a separate article entitled – ‘Srila Raghunatha Das Goswami’s Sripat, Krishnapur Thakurbari (Near Bandel)’.

Lord Nityananda then expressed His desire that Raghunatha das, being a son of a zamindar (landlord) and a very rich person, should feed all of them sumptuously.Lord Nitai joked that Raghunatha, who was praying from a distance like a thief had now been caught, and so he had to receive this Danda (punishment). Raghunatha became very happy to hear this and immediately made the necessary arrangements to feed all the vaishnavas dahi-chida( curd and chipped rice). All the intimate associates of Nityananda Prabhu namely Uddharana datta Thakura, Gaudidasa Pandita, Gadadhara das, Murari Caitanya, etc were present.It is said that not only Lord Nitai and His associates but all the local devotees honoured the delicacy to their full content.There were so many devotees, that all of them could not be accommodated on the bank of the ganges; hence many devotees, went and stood inside the river submerging themselves up to their necks to attend the sumptuous feast. Lord Nityananda was so happy with the arrangement that He meditated upon Sri Caitanya, who immediately appeared over there in His transcendental form. No one could see Him however, except for Nityananda Prabhu and a select few.Thereafter the two Lords went over each and every clay pot.Taking a morsel of chipped rice from each pot ,they put it into the other’s mouth. Such was the loving reciprocation they enjoyed.This is how the great Dahi-Chida festival (sometimes also referred to as the Danda-mahotsav) came into being and the Gaudiya vaishnava devotees from all over the world gather even today at Panihati to commemorate this occasion every year.‘The Gaudiya Treasures of Bengal’ considers itself immensely fortunate to have been able to attend the same a few years back.

It is also very important to note at this point, that without the mercy of Nityananda Prabhu, it is not possible for one to gain the shelter of Lord Caitanya (as we see in the case of Raghunatha das Goswami). Hence it is very important for us to aspire the cooling shades of Lord Nitai’s lotus feet to make any significant progress in our spiritual lives.

The land of Panihati has been sanctified by the pastimes of innumerable eternal devotees of the Supreme Lord. Besides Raghava pandita and Damayanti, their servant, Sri Makardhwaj kar, another resident of Panihati, was also one of the Lord’s eternal associates. Sri Gaura Ganoddesha dipika reveals that he was the incarnation of Chandramukha, the famous dancer of Vrindavana. Sri Caitanya once revealed to Makardhwaj that his service to Raghava Pandita was the same as service to the supreme.

We worship the lotus feet of our spiritual master ,whose causeless mercy has empowered us ineligible fools ,to gain entrance and take up service in this transcendental abode of Panihati. We seek shelter of this holy land, and pray that its glories remain forever imprinted in our heart.‘The Gaudiya Treasures of Bengal’ offers millions of obeisances and humbly prays to Sri Raghava Pandita and Srimati Damayanti  that we advance in our Krishna consciousness, develop attachment unto the lotus feet of Lord Gaura Nitai and are able to serve Sri Guru & Vaishnavas, by our honest and sincere efforts. We seek their blessings and compassion , in successfully rendering this humble service of reciting the pastimes and revealing the pastime places of the Supreme Lord and His beloved associates.We shall consider ourselves greatly fortunate and our existence meaningful if Lord Gaurahari and our dear spiritual master are kindly pleased with our endeavours.

Raghava Bhavan is presently under the care and management of the Pathbari ashram.

Take a train from sealdah and get down at Sodepur station. From there you can take a rickshaw and directly reach Raghava Bhavan (in panihati). The journey should not take more than 1.5 hours from Kolkata.

The piece of land ,upon the bank of the holy Ganges stretching from Baranagar to Khardaha is enriched with the Lord’s causeless mercy. Sri Caitanya , Nityananda prabhu and their associates have all performed their innumerable heart melting pastimes over here. This land has been sanctified by the dust of the Lord’s lotus feet. Various demigods have been waiting and meditating for millions of years desiring to take birth in this transcendental abode of Panihati where the various wish fulfilling trees readily bestow pure devotion upon one and all without any discrimination.The transcendental abode of Panihati is very quiet,serene and a perfect escape into the realm of transcendence.

Accommodation – As Panihati is not even an hour’s ride from kolkata, it is recommended that one stay in Kolkata and then travel to take darsana of the exalted sites of Panihati. One can choose to stay at any of the hotels (there are many) in Kolkata. However, if one desires to stay in Panihati itself, one can get in touch with the Iskcon Panihati temple (+91-33-2523 5613) where one can avail rooms and nice prasadam. 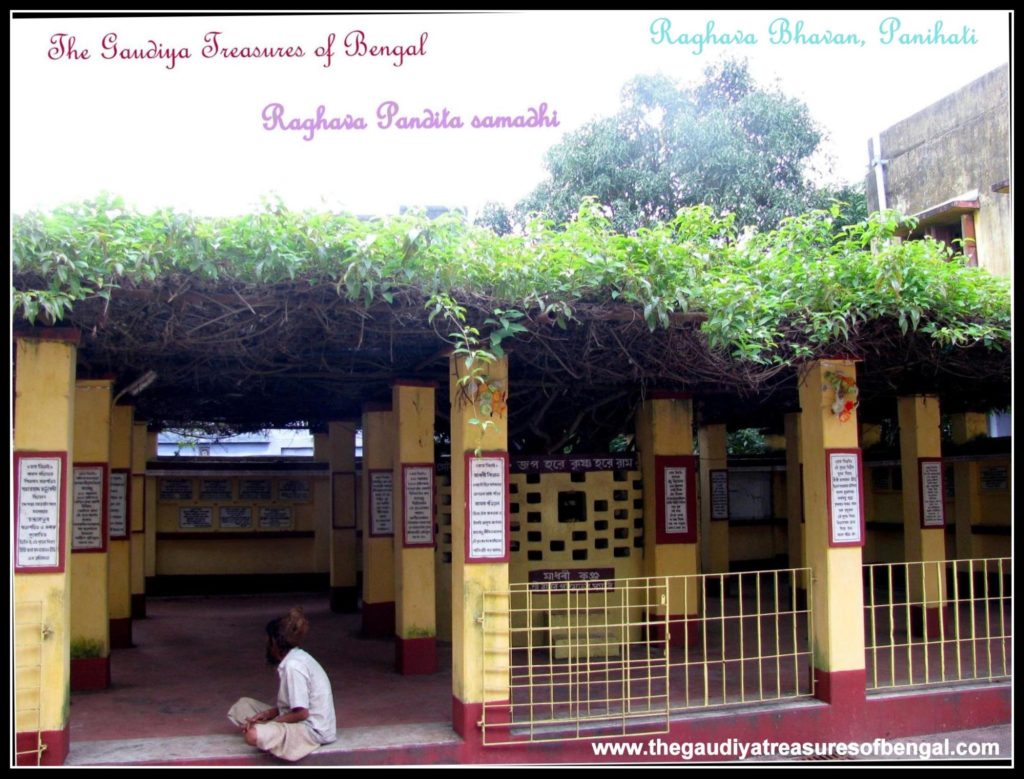 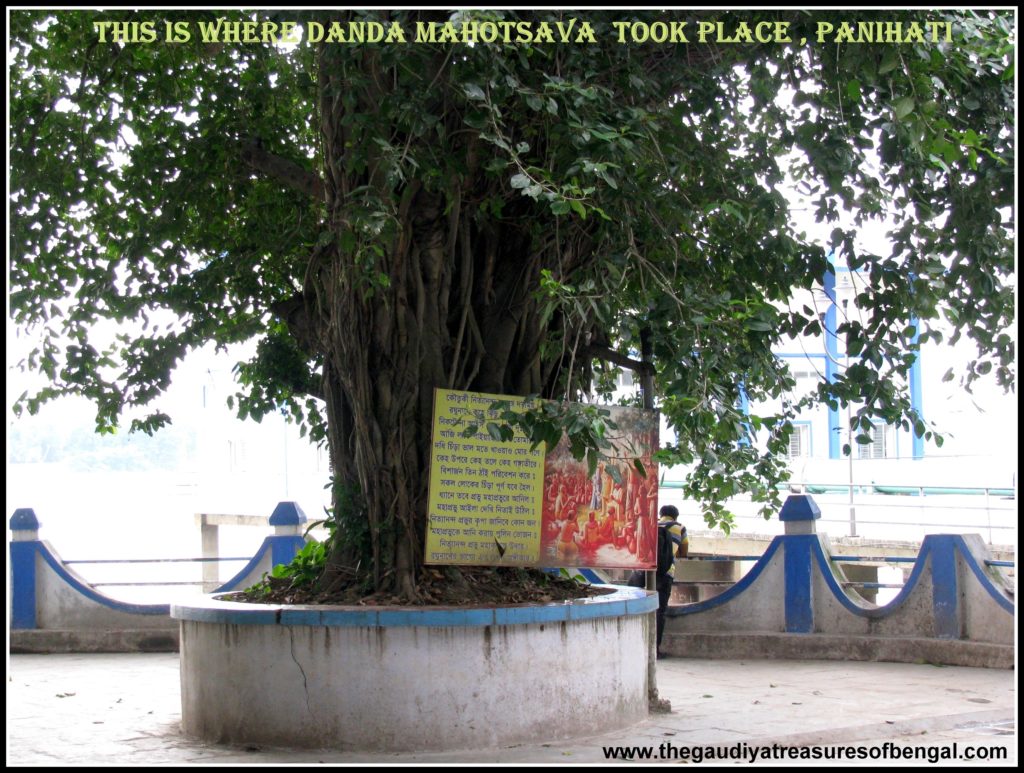