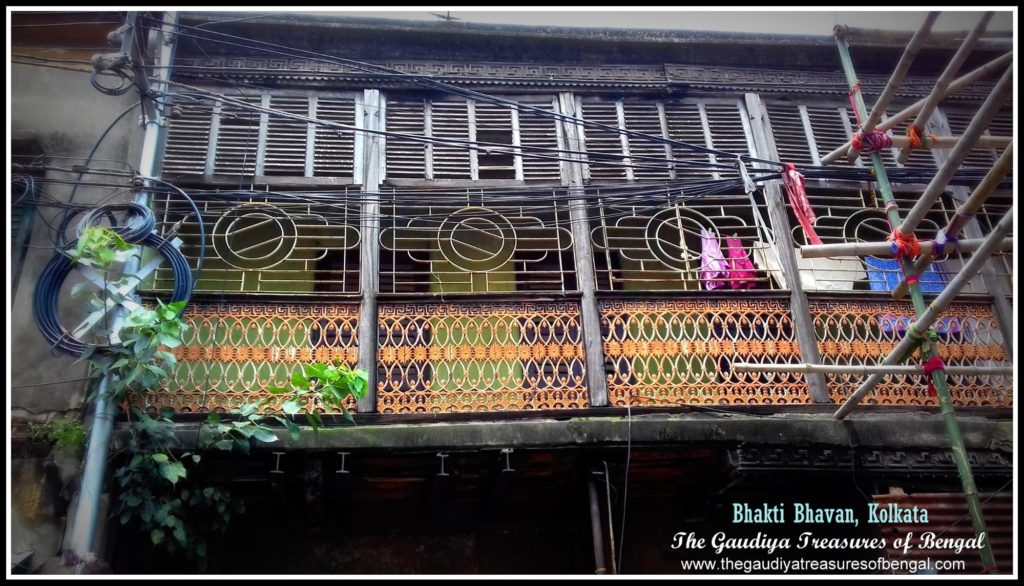 Srila Saccidananda Bhaktivinoda Thakur, who is sometimes also referred to as the seventh Goswami, is an eternal associate of the Supreme Lord. His contribution to the Brahma-Madhva Gaudiya Sampradaya is invaluable.At a time when the science of pure devotional service (Bhakti) had almost become lost due to the cultural and religious chauvinism of the ruling British, and the essence of Vaishnavism largely discredited due to the perverted actions and lifestyles of a few non bonafide Vaishnava sects, Srila Bhaktivinoda was largely responsible for rescuing and unearthing the timeless teachings of Sri Caitanya Mahaprabhu. In Fact it was he who ,after conducting a painstaking research, had rediscovered the long lost birthsite of Sri Gaurasundara (refer – ‘YogPeeth, Mayapur, Navadvipa – The birthplace of Sri Caitanya Mahaprabhu’). Srila Bhaktivinoda Thakur, was not only a magistrate, but also a renowned and recognised scholar in his days, with vast knowledge in english,bengali,hindi,oriya and sanskrit.He was also a member of the royal asiatic society of London. Such was the degraded state of affairs during those days, that Srila Bhaktivinoda Thakura could not find a bonafide copy of Sri Caitanya Caritamrta, the most important literature for understanding Lord Caitanya’s life and teachings, anywhere. It was only after several enquiries and a long wait, that he received a copy of this book. He subsequently published it along with his commentaries (Amrta-pravaha-bhasya). Likewise, he was instrumental in unearthing several ancient manuscripts like Caitanyopanishad ( portion of Atharva Veda) ,Sri Krishna Vijaya, etc. ‘The Gaudiya Treasures of Bengal’ considers itself an insignificant servant of Srila Bhaktivinoda Thakura, whose causeless mercy has enabled us fools to get a glimpse of his elevated stature and pen a few lines in his glorification.

Who is Bhaktivinoda Thakur ?

Sri Kedarnath Datta, who came to be subsequently known as Bhaktivinoda Thakur, was born on 2nd of september, 1838 in the ancient village of Birnagar, situated in Ula (Nadiya District). Kedarnath was born of rich and illustrious parents, Sri Ananda Chandra Datta and Jagat Mohini Devi. In his book Datta-vamsa-mala, Srila Bhaktivinoda explains that he was born into a family who had descended from Purushottama Datta, foremost of the five renowned kayasthas who had come to the Gauda region on invitation of the king Adisura.His family lineage has also been graced by the birth of the great vaishnava acharya Sri Narottama Das Thakura, whose devotional compositions are glorified all over the three worlds.Sri Govinda-sarana Datta ,one of the cousins of Narottama Das Thakura, was once granted a huge piece of land on the bank of the Ganges, by the sultan of Delhi.This piece of land was named after him and came to be known as Govindapur.It was this land of Govindapur that was later merged with Sutanuti and kolikata, to form the modern city of Calcutta (kolkata) as we know today. Such is the great lineage of our dear thakura.

Amidst the hustling busy streets of North kolkata, quietly resides an exalted spiritual destination. ‘Bhakti Bhavan’ as it is commonly referred to ,has once served as the residence of Srila Bhaktivinoda Thakur. In addition to possessing a couple of houses in Navadvipa (Svananda Sukhada Kunja & Surabhi Kunja) , our thakura also owned this house here in Kolkata. A lot of his literatures were composed while he stayed over here. His siksha Guru, Sri Jagannatha Das Babaji maharaja, used to also put up at Bhakti Bhavan, whenever he visited Calcutta (as it was then called). ‘The Gaudiya Treasures of Bengal’ has covered the life and pastimes of Srila Jagannatha Das babaji in detail in a separate article entitled – ‘The Samadhi and Bhajana Kutira of Srila Jagannatha Das Babaji ,Navadvipa (Koladvipa)’. Such eternal associates of the Lord have thus sanctified this place with the dust of their lotus feet. The house is quite big spreading over 5 Kathas (1 katha = 720 sq feet).The Thakura had bought the house for only 6000 rupees back then. The house shall cost atleast a crore in today’s valuation, considering its size and location. Such is the devaluation of money that has taken place since. 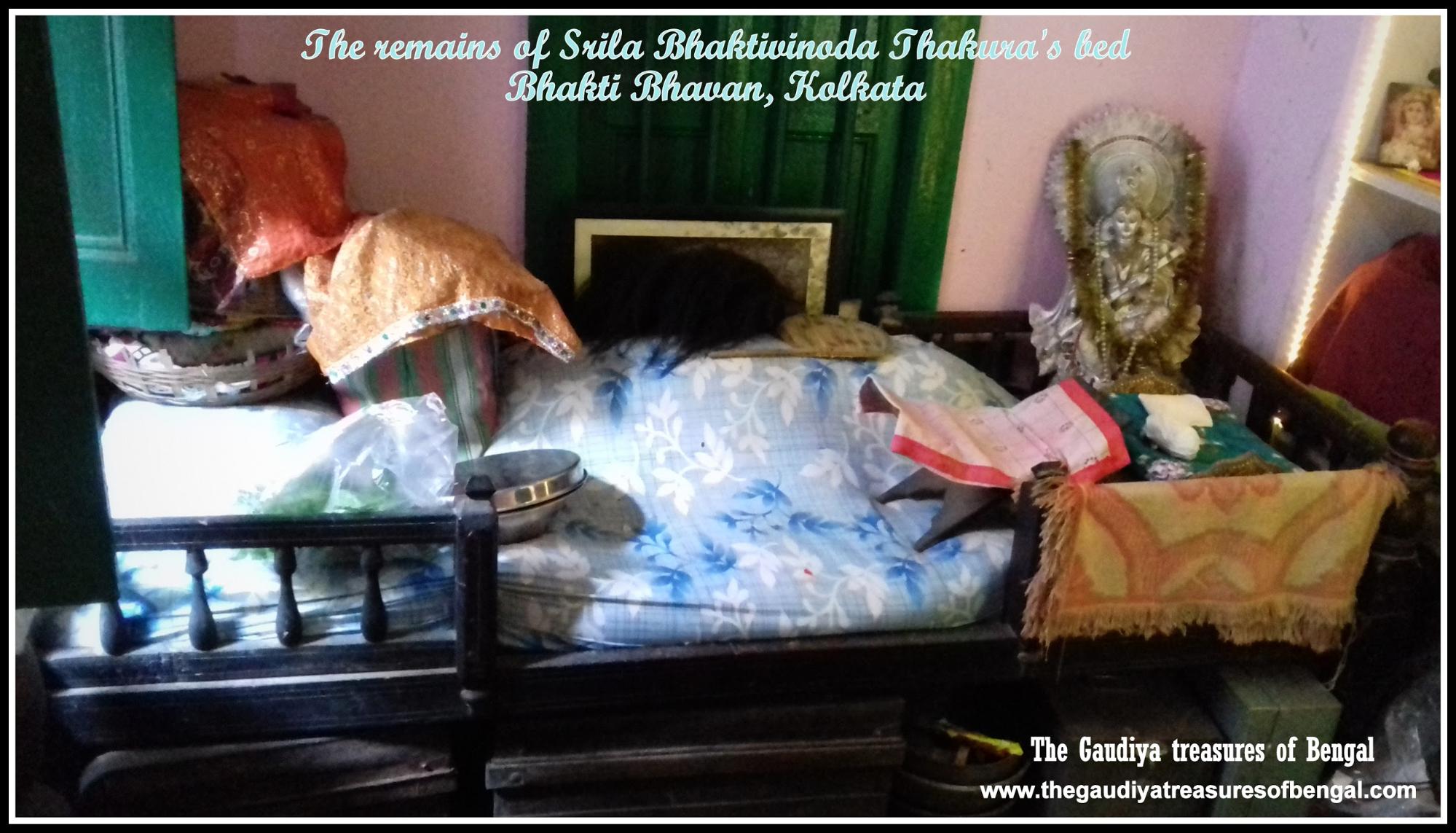 Srila Bhaktivinoda Thakura wanted to establish a house in Calcutta ,especially for his preaching work. While excavating for the construction of Bhakti Bhavan, a deity of Kurmadeva was unearthed. Our Thakura entrusted the service of this Kurmadeva into the hands of his young son, Sri Bimala Prasada Datta, who performed His worship diligently. One visiting Bhakti Bhavana ,can take darsana of this beautiful deity which has been carefully preserved here till this day. For those who do not know, Sri Bimala prasada Datta went onto become one of the greatest acharyas of the Brahma Madhva Gaudiya Sampradaya.He came to be renowned as Srila Bhaktisiddhanta Saraswati Thakura, the founder of the worldwide Gaudiya Mathas. Also worshipped here at Bhakti Bhavan is the Giridhari Sila, which was once gifted to Srila Bhaktivinoda by Sri Jagannatha Das Babaji. ‘The Gaudiya Treasures of Bengal’ considers itself exceedingly fortunate to have been able to visit and take darsana of these mesmerizing deities.

In the year 1885, Srila Bhaktivinoda Thakura opened a press at his house here at Bhakti Bhavan. He named it as ‘Sri Caitanya Yantra’ which he subsequently utilized to print and widely distribute his books. ‘Sajjana-toshani’, the spiritual magazine, Sri Caitanya Caritamrta along with his commentaries, Sri Caitanya-Siksamrta, were among a few published during this time. He met with eminent personalities during his stay in Calcutta whom he preached to further the mission of the Lord.On the 23rd of June, 1914, on the disappearance day of Sri Gadadhara Pandit, Srila Bhaktivinoda Thakura left his body here at Bhakti Bhavan, and entered the eternal pastimes of Gaurasundara. The remains of his body were taken back to his beloved ‘Svananda Sukhada Kunja’ where they were placed in samadhi.To read more about the life and the pastimes of Saccidananda Bhaktivinoda Thakura, please refer to the article entitled – ‘Remembering Srila Bhaktivinoda Thakura at Svananda Sukhada Kunja & Surabhi Kunja, Navadvipa (Godrumadvipa)’.

Mr. Bumba Dutta, who is a direct descendent of Srila Bhaktivinoda Thakura (Bumba’s great great grandfather), showed us around Bhakti Bhavan and kindly permitted us to take a few snaps of this place. He and his family-members presently reside and take care of this exalted spiritual site. 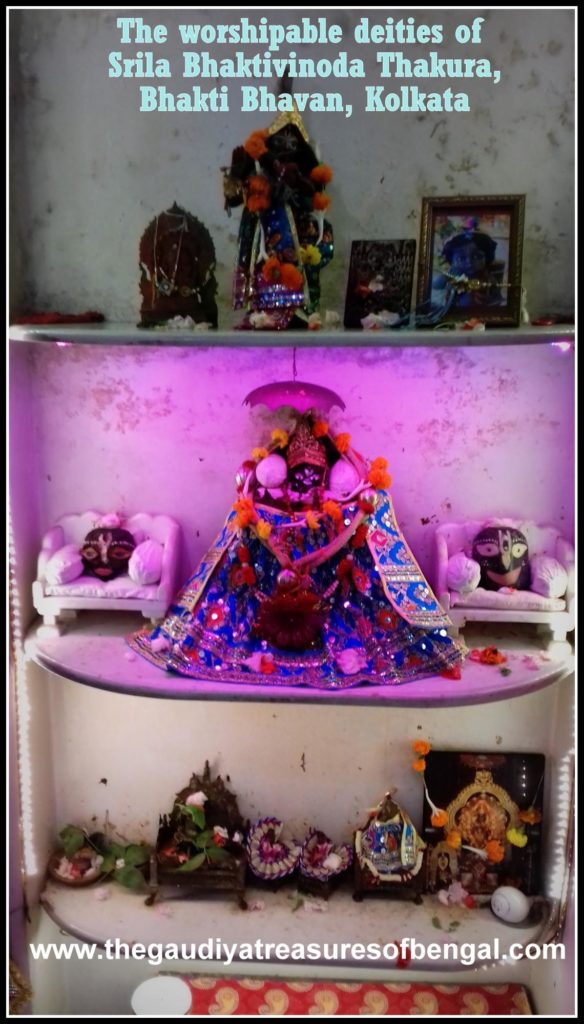 We worship the lotus feet of our spiritual master ,whose causeless mercy has empowered us ineligible fools ,to gain entrance and take up service at this transcendental site of Bhakti Bhavan.We seek shelter of this holy place, and pray that its glories remain forever imprinted in our heart.‘The Gaudiya Treasures of Bengal’ offers millions of obeisances and humbly prays to Srila Bhaktivinoda Thakura that we advance in our Krishna consciousness,develop attachment unto the lotus feet of Lord Caitanya and are able to serve Sri Guru & Vaishnavas, by our honest and sincere efforts. We seek his blessings and compassion , in successfully rendering this humble service of reciting the pastimes and revealing the pastime places of the Supreme Lord and His beloved associates.We shall consider ourselves greatly fortunate and our existence meaningful if Lord Gaurahari and our dear spiritual master are kindly pleased with our endeavours.

One can board the metro railway and get down at the Girish park metro station, situated at the very heart of North Kolkata. Reaching here one can ask for directions to reach the Rabindra Kanan park. The postal address of Bhakti Bhavan is 181 Ramesh Dutta street ,and is situated adjacent to this park.

Accommodation – One can choose to stay at any of the hotels (there are many) in Kolkata. Bhakti Bhavan ,located at the heart of the city, is not too far from anywhere in central Kolkata.
Prasadam is not available in Bhakti Bhavan as this is a personal residence and not a temple. So devotees are requested to make prior arrangements of their own prasadam.