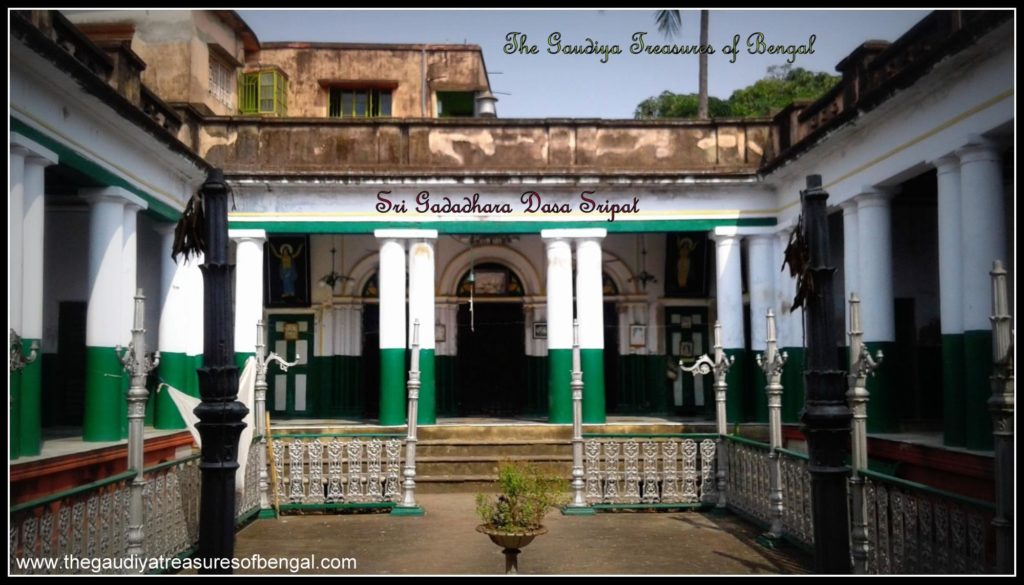 Sri Kavi Karnapura reveals in Gaura Ganoddesha Dipika that Sri Gadadhara Das was the combined incarnation of Srimati Chandrakanti devi (an expansion of Radharani) and Purnananda Gopi, who was a dear friend of Lord Balarama.

Krishnadasa Kaviraja Gosvami identifies Sri Gadadhara das, to be the twenty-third branch of Lord Caitanya’s desire tree of  devotional service. He has also referred to him as the ‘topmost’  (sarvopari) branch for he had inspired the Kazi (Muslim Magistrate) to chant the holy names of Lord Hari.(Sri Gadadhara das shakha sarvopari, kazi ganera mukhe yenha bolaila Hari). Gadadhara das’ Sripat is situated on the outskirts of North Kolkata, at a place called Ariadaha. Located on the bank of the Ganges, this exalted site, is exceedingly beautiful and spiritually surcharged. The place came across as very quiet, serene and a perfect escape into the realm of transcendence.Sri Gadadhara Das had resided over here at Ariadaha for many years. Finally he shifted to Katwa, where he spent his last days serving the deity of ‘Bara Gauranga’ at Gauranga Bari.’The Gaudiya Treasures of Bengal’ has covered the details of Gauranga Bari in a separate article entitled – ‘Sri Gauranga Bari (katwa) – Where Mahaprabhu accepted Sannyasa’.

Here at Ariadaha, Sri Gadadhara Das had manifested several of his heart melting pastimes. It was here at Ariadaha that he had established the worship of his beloved Bal-gopal deity. Lord Nityananda had also spent a few days here and had performed His ecstatic sankirtana pastimes (described later in the article).The devotees who presently serve this dham are very simple bengalis who were exceedingly happy to narrate the awe-inspiring history of this place to us. 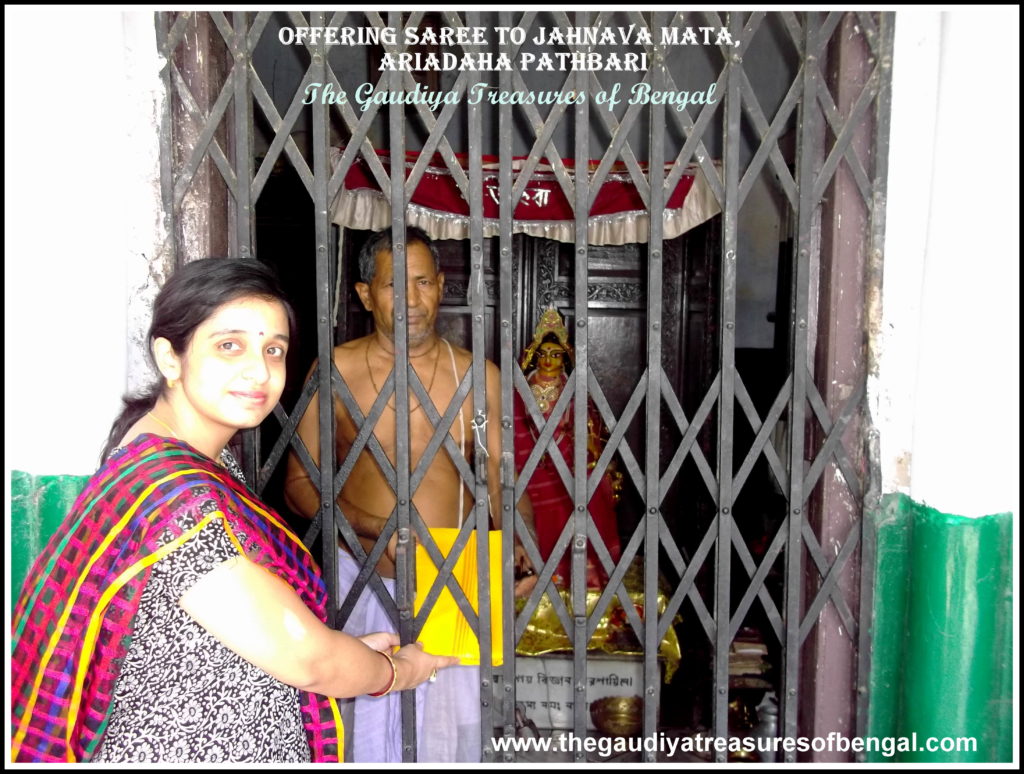 The temple has been managed by different authorities in the course of these last 500 years. Finally the temple was renovated in the year 1849 by Sri Madhusudana Mullick of Kolkata, who had also arranged for the deity worship to be carried out properly (refer – ‘The pious Mullicks of Bengal’).The team from ‘The Gaudiya Treasures of Bengal’ considers itself exceedingly fortunate to have been able to visit and smear our sinful bodies with the all-purifying dust of this holy place.

Sri Gadadhara das is counted among the associates of both Lord Gauranga and Nityananda. Although he was an associate of Nityananda Prabhu, he was not among the cowherd boys (dvadasa gopala) of vraja, but was situated in a transcendental mellow of conjugal love with Krishna.As mentioned before, Sri Gadadhara Das was the combined incarnation of Srimati Chandrakanti devi (an expansion of Radharani) and Purnananda Gopi.Sri Gadadhara had been one of the most intimate associates of Nityananda Prabhu whom he had assisted, in widely preaching Krishna consciousness throughout Bengal.

A.C Bhaktivedanta Swami Prabhupada writes in length about Sri Gadadhara Das in commentary to Caitanya Caritamrta  (Adi,10.53 , purport). Srila Gadadhara Das is said to have been originally an inhabitant of Ariadaha. As per Bhakti Ratnakar, Sri Gadadhara Das relocated from Navadvipa, to Katwa, after the disappearance of Sri Caitanya Mahaprabhu.As discussed before, he stayed and served at ‘Sri Gauranga Bari’ in Katwa, where Mahaprabhu had accepted His sannyasa initiation (please refer the respective article). Here at Katwa, rests the full samadhi of Sri Gadadhara Das and ‘Sri Gauranga Bari’ temple, where he once served, is presently under the care and maintenance of the family descendants of Sri Yadunandana, a disciple of Gadadhara Das.At his sripat in Ariadaha ,rests his pushpa samadhi, and ‘The Gaudiya Treasures of Bengal’ considers itself very fortunate to have been able to visit and seek his blessings at both Ariadaha and Katwa. 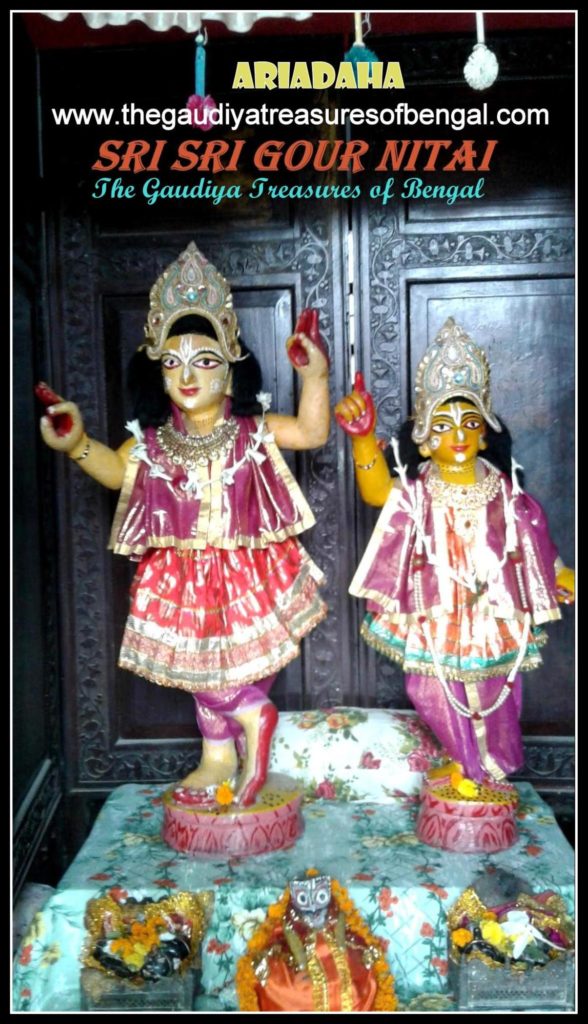 Srila Vrindavan Das Thakura narrates a beautiful pastime in Caitanya Bhagavata that While Sri Nityananda was returning to Bengal along with His associates, they were all intoxicated with intense love of God and as a result were almost completely devoid of any external consciousness. Sri Gadadhara Das , who was also one of His associates, was then absorbed in the mood of a Gopi and laughed and loudly asked if anyone would buy yogurt from him. On another occasion, he carried a jug of Ganges water on his head, thinking He were selling milk in Vrindavana. Thus, Sri Gadadhara Das was always absorbed in the transcendental mellow of Madhurya (conjugal love) as exhibited by the Gopis of Vrindavana.All such activities are very common for the intimate associates of the Lord, who have appeared in this world ,just to give us fallen souls, a taste of their supremely ecstatic eternal pastimes.

Once, when Caitanya Mahaprabhu halted at the house of Raghava Pandita (Please refer the article – ‘Raghava Bhavan ,Panihati’) ,while travelling to Vrndavana, Gadadhara das went to see Him.Seeing him, Sri Caitanya Mahaprabhu was so glad that He blessed him by putting His foot on his head.

Deliverance of the Kazi:

There is a very well known pastime, that had occurred while Sri Gadadhara Dasa, was preaching the congregational chanting of the Lord’s holy names.There was a local magistrate (kazi) who was very much against this sankirtana movement. So one night, Sri Gadadhara Prabhu went to the house of the kazi, and started rebuking him. Gadadhara prabhu was then intoxicated with love for the Supreme Lord.

He told the kazi that Lord Gauranga and Nityananda were delivering the entire world by distributing the sweet nectar of the holy names of Hari and demanded to know as to why the Kazi was still missing out on the opportunity. He asked him as to when he would start chanting the holy names of Lord Krishna.

Hearing this the Kazi got a bit surprised, and to pacify Gadadhara, replied that he would chant the name of “Hari” the next day. Hearing the Kazi’s words,however, Gadadhara prabhu began to dance in ecstasy, exclaiming that, the Kazi had already just uttered the name of Lord Hari, and hence he would be soon delivered.The Kazi then realized the greatness of Sri Gadadhara Das, and took shelter at his lotus feet. In this way, Gadadhara das has delivered countless sinners, nonbelievers, and yavanas.This Sripat(house) in Ariadaha, that Sri Gadadhara once resided in, was gifted to him by this Kazi (according to the local devotees). 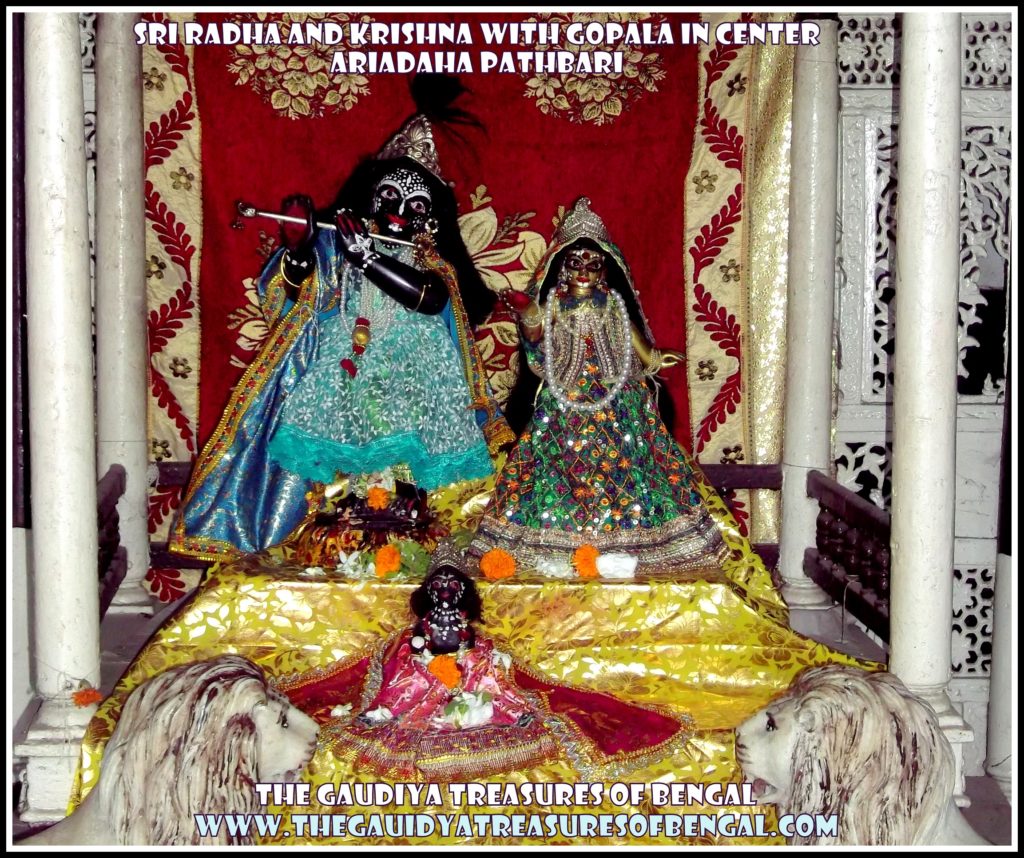 One day, Lord Nityananda was in the audience at a performance of Krishna’s dana-lila by Madhava Ghosh at the house of Gadadhara Das.The dana-lila is described elaborately in Sri Rupa Goswami’s Dana-keli-kaumudi, in which Sri Krishna blocks the road and harasses Srimati Radharani and the Gopis ,asking them to pay taxes in order to carry their milk products.Hearing the sweet voice and poetic expressions of Madhava Ghosh, Lord Nitai became absorbed and then picking up Sri Gadadhara’s bal-gopala from the altar,and holding him close to His chest, Nitai began to dance in ecstasy.The gestures He exhibited while dancing were like flashes of lightning; His limbs moved with unparalleled grace. His expressive eyes, His sweet smiles and eruptive laughter, the shivering and quaking of His head, provided a feast for the Devotees’ eyes who were showered with torrents of Love.For this reason,Sri Gadadhara’s house is also known as the place where the Dana Lila was enacted.

The Madhavi Tree that presently shelters Sri Gadadhara Prabhu’s samadhi, at ariadaha, is standing tall since the last 500 years. After cooking and serving the devotees a grand feast,Sri Nityananda Prabhu is said to have planted His cooking stick here in the ground , from which the Madhavi tree had originated. The tree hence has a supernatural birth and existence, and is said to bestow pure devotion upon those who take her shelter.

At Sri Gadadhara das Sripat, one can make his life successful by taking the merciful darsana of Sri Gadadhara das’ worshipable Gopal jiu ,whom Sri Nityananda Prabhu had embraced and danced. Sri Gopal jiu is accompanied by beautiful Radhakanta and Sri Sri Gour Nitai deities. A beautiful deity of Jahnava Mata also graces the dham. One can pray to the sacred miraculous Madhavi tree who grants one devotion and entrance into eternity.The Madhavi tree shelters and offers its sweet flowers to the pushpa samadhi of Paramahamsa nitya siddha Sri Gadadhara Dasa, the dust of whose lotus feet is the treasure of the devotees. 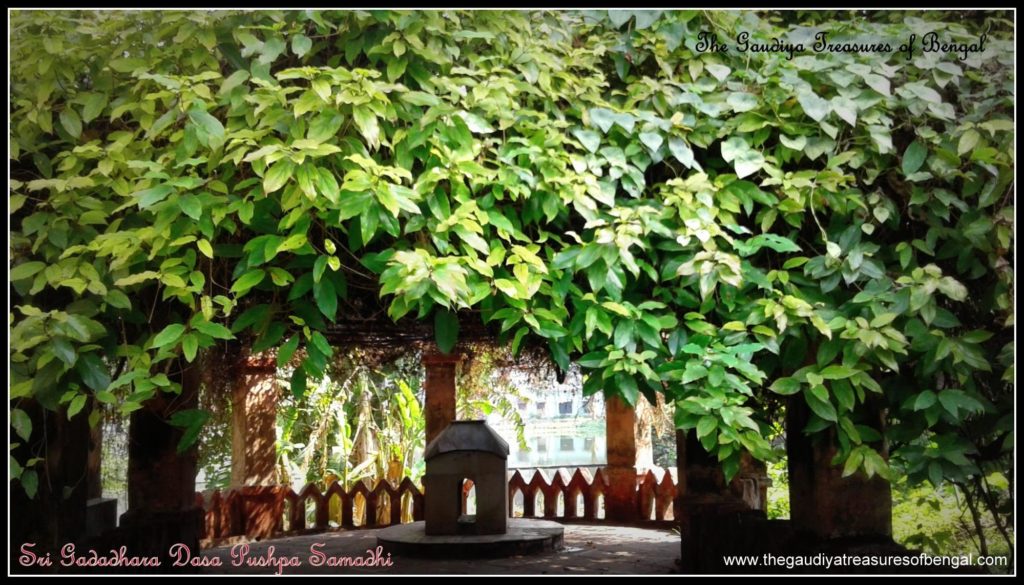 We worship the lotus feet of our spiritual master ,whose causeless mercy has empowered us ineligible fools ,to gain entrance and take up service in this exalted abode of Ariadaha. We seek shelter of this holy land, and pray that its glories remain forever imprinted in our heart.‘The Gaudiya Treasures of Bengal’ offers millions of obeisances and humbly prays to Sri Gadadhara das that we advance in our Krishna consciousness, develop attachment unto the lotus feet of Lord Gaura Nitai and are able to serve Sri Guru & Vaishnavas, by our honest and sincere efforts. We seek his blessings and compassion , in successfully rendering this humble service of reciting the pastimes and revealing the pastime places of the Supreme Lord and His beloved associates.We shall consider ourselves greatly fortunate and our existence meaningful if Lord Gaurahari and our dear spiritual master are kindly pleased with our endeavours. 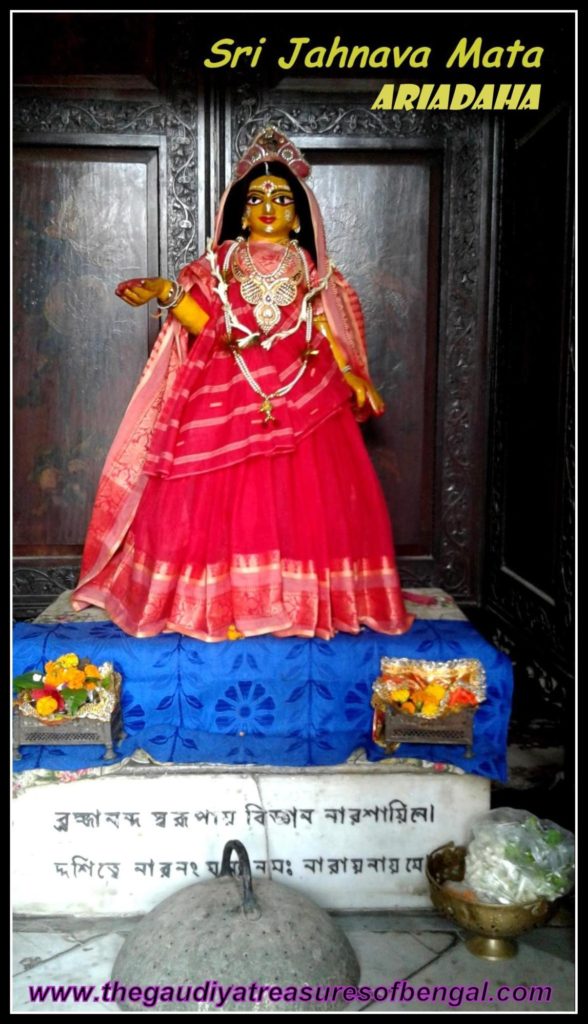 It is half an hour ride from proper kolkata. You can take any bus and get down at Ariadaha Bus stop and then take a rickshaw/auto to Sri Gadadhara das Sripat.  The temple is locally known as ‘Sakherbazar pat bari’.

Accommodation – As Ariadaha is not even an hour’s ride from kolkata, it is recommended that one stay in Kolkata and then travel to take darsana of the exalted sites of Ariadaha. One can choose to stay at any of the hotels (there are many) in Kolkata.The devotees are advised to contact the authorities of Ariadaha Patbari temple to avail their prasadam.