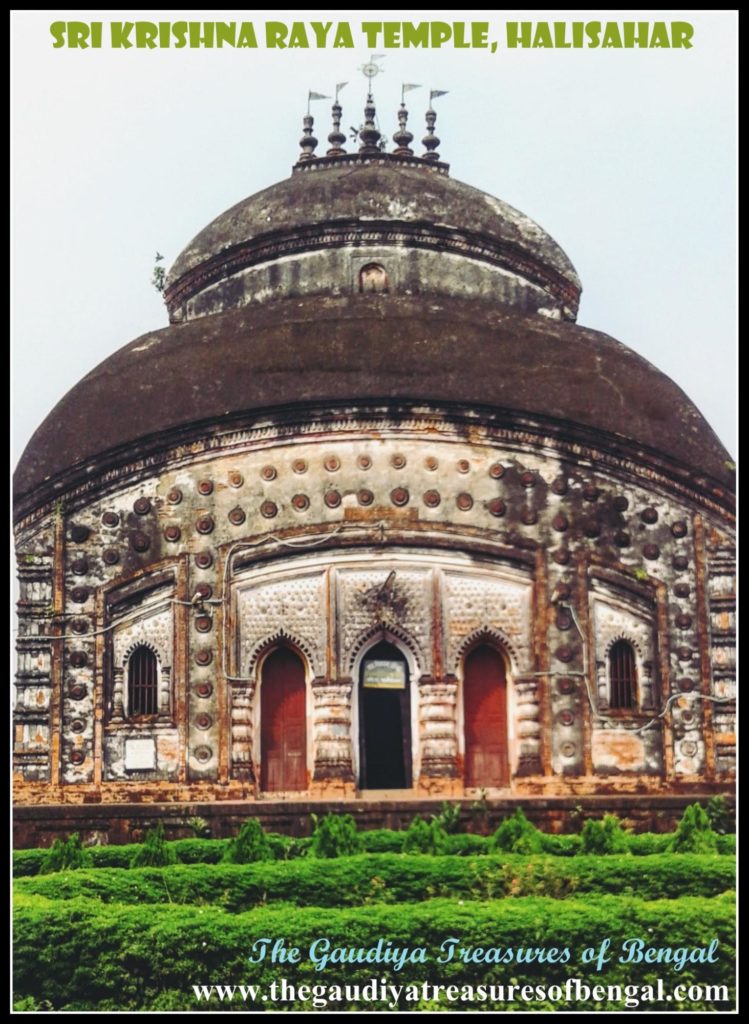 The Krishna Raya temple is one of the biggest in Bengal and is one of the most significant for the Gaudiya vaishnavas. It is situated in a spacious compound ,adorned with beautiful gardens ,with high boundary walls on its four sides. The temple today also houses a big kitchen along with residential quarters. Sri Nimai Mullick, the then prominent zamindar of kolkata, is said to have seen the broken down temple while he was on his way to Benares (refer – ‘The pious Mullicks of Bengal’). The pious zamindar thereafter reconstructed the temple and arranged for the proper worship of the deities in the year 1786 AD. Sri Krishna Raya are the worshipable Radha Krishna deities of Sri Srinatha Prabhu, the spiritual master of Kavi Karnapura, the third son of Sivananda Sen. Kavi Karnapura does not reveal the original identity of his spiritual master,Sri Srinatha Chakravarthy, in his book Sri Gaur Ganoddesha Dipika. The reason being that a disciple should not address his spiritual master by his name.

Srila Krishnadas Kaviraj Goswami highly glorifies Sri Srinatha Prabhu in his Caitanya Caritamrta and reveals that he was blessed by Mahaprabhu and that his love for Krishna mesmerized all the three worlds (Srinatha paṇḍita Prabhura kripara bhajana, yanra Krishna-seva dekhi vash tribhuvana).Srinatha  Chakravarthy was a disciple of Sri Advaita Acharya.

The residence of Sivananda Sen ,which was once situated in this town of Halisahar, has probably been destroyed due to the shift in the course of the Ganges. So, at present this Krishna-Raya temple , is also celebrated as the residence of Sivananda Sen (Sivananda sen Sripat). It is unknown where exactly the Gaur-Gopala deities of Sri Sivananda Sen are at present. However, the worshipable deities of Srinatha Pandit, the guru of Kavi Karnapur, are still residing at the Krishna Raya temple and they continue to accept our humble offerings.

Sri Sivananda Sen was an intimate servant of Sri Caitanya Mahaprabhu. Every year on the occasion of Rathayatra, he would lead the devotees from Bengal to Puri, so that they could all meet the Lord. The entire cost of this journey in which hundreds of devotees would participate, was borne entirely by him.Sri Kavi Karnapur reveals that the two vraja gopis ,Vira and Dyuti, who acted as messengers in Vrindavana and arranged the meeting between Lord Krishna and the gopis, combined to appear as his father,Sri Sivananda Sen. Another vraja-gopi Bindumati appeared as Sivananda sen’s wife, his mother. 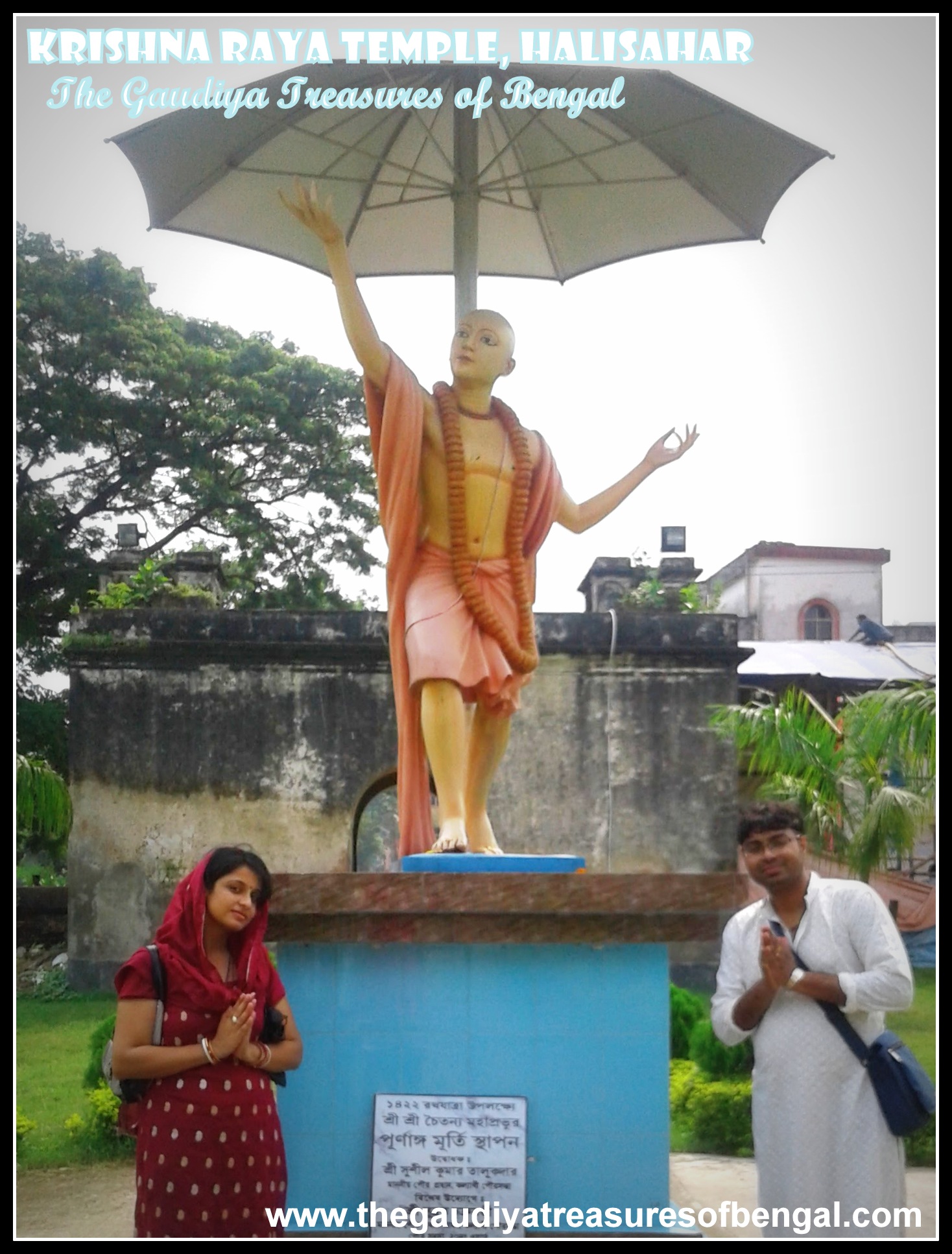 Though Kavi Karnapura did not reveal his own identity in Gaura Ganoddesha Dipika,it has been mentioned elsewhere in Vaishnava Acara darpana that he was the incarnation of ‘Gunacuda sakhi’, who eternally serves Krishna in Vrindavana. The whole family of Sivananda sen was immensely blessed by Mahaprabhu. Kavi Karnapura was blessed at a very early age when Lord Caitanya inserted His divine toe in the child’s mouth.In fact Lord Caitanya had Himself named the child as ‘Kavi Karnapura’ upon hearing the wonderful poetry that the child was capable of composing.

The Temple & the Deities:

Srila Bhaktisiddhanta Saraswati Thakura mentions in his anubhashya that according to the hearsay the Krishna Raya deity was one of the three deities to be carved out of the stone that Birchandra prabhu (son of Lord Nityananda) had brought from the Nawab’s palace in Malda.The other two deities being Sri Radhavallabh jiu of Serampore and Sri Syamasundara jiu of Khardaha.Srila Prabhupada quotes Srila Bhaktisiddhanta Saraswati Thakura’s anubhashya in his purport to Caitanya Caritamrta 10.107 (Adi Lila). 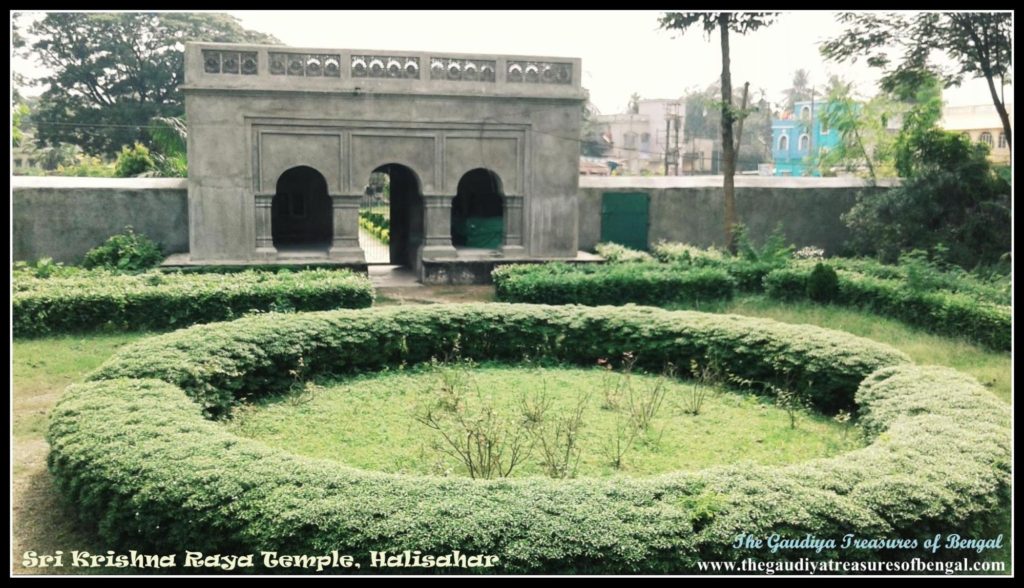 So it was over here at present day Halisahar, that Sri Srinatha prabhu had installed his Radha Krishna deities, that was carved out from the same stone that was brought by Birchandra Prabhu (later known as Birbhadra Goswami) from Murshidabad. However,It is worthwhile mentioning over here, that many people are also of the opinion ,that the three deities that were actually carved out of the stone brought by Birbhadra Goswami are – Sri Syamasundara jiu of khardaha, Sri Radhavallabh jiu of Serampore and Sri Nandadulal jiu of Saibon.Please refer to the article entitled – ‘Sri Sri Radha-Syamasundara temple, Khardaha’ for more details regarding the installation of these amazing deities. 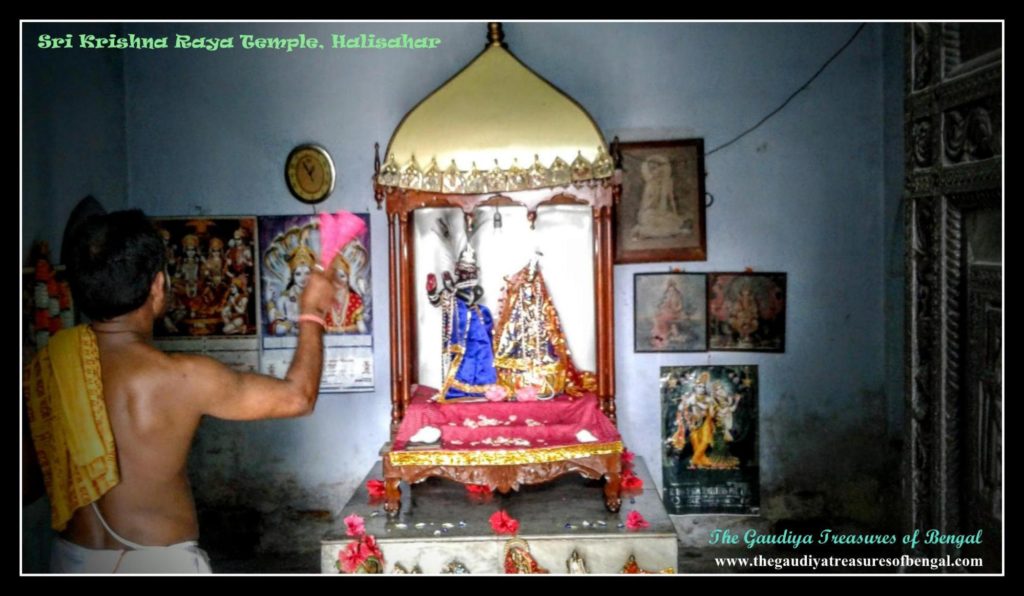 However, irrespective of the stone out of which the carving was done, it is a fact that Sri Krishna Raya is the ancient worshipable deity of Sri Srinatha Chakravarthy, an eternal associate of Lord Caitanya. ‘The Gaudiya Treasures of Bengal’ considers itself greatly blessed to have had the opportunity to take darsana of Krishna Raya’s mesmerizing form and to have interacted with His beloved servants.We long to return to this holy land of Halisahar again and again where Srivas pandita, Srinatha  Prabhu, Sri Sivananda Sen and other associates of lord Caitanya eternally perform their ecstatic pastimes.

The Krishna Raya temple is a marvelous piece of architecture, and is one of the oldest and the tallest constructions of ancient Bengal. Apart from its significance from a Gaudiya Vaishnavism point of view, it’s grandeur is a living proof of the material and spiritual opulence, that the zamindars of erstwhile Bengal once possessed. We were mesmerized and honored to take darsana of the amazing Krishna Raya deities. The dedication and simplicity of Sri Krishna Raya’s servants really moved us. They discussed how their parents and forefathers had also dedicated their lives serving these same deities.The atmosphere at the Krishna Raya temple is highly spiritually surcharged.The place came across as very quiet,serene and a perfect escape into the realm of transcendence.

We worship the lotus feet of our spiritual master ,whose causeless mercy has empowered us ineligible fools ,to gain entrance and take up service in this exalted abode of Halisahar. We seek shelter of this holy land, and pray that its glories remain forever imprinted in our heart.‘The Gaudiya Treasures of Bengal’ offers millions of obeisances and humbly prays to Sri Sivananda Sen and Srinatha Pandit that we advance in our Krishna consciousness, develop attachment unto the lotus feet of Lord Gaura Nitai and are able to serve Sri Guru & Vaishnavas, by our honest and sincere efforts. We seek their blessings and compassion , in successfully rendering this humble service of reciting the pastimes and revealing the pastime places of the Supreme Lord and His beloved associates.We shall consider ourselves greatly fortunate and our existence meaningful if Lord Gaurahari and our dear spiritual master are kindly pleased with our endeavours.

Take a train from sealdah station(kolkata) and get down either at Kanchrapara or the Halisahar station. Take an auto/rickshaw from there and get down at Rathtala (Kanchan Pally) crossing (where the annual rath yatra held). The Krishna Raya temple is a 2 minutes walk from there. The entire journey would take around 2 hours from kolkata. Though this place lies adjacent to Kanchrapara/Halisahar (situated in North 24 Parganas), the holy dham falls within the confines of Nadia district (Rathtala Kalyani Nadia, ward no – 20).

The modern day Halisahar is quite a beautiful town, located on the bank of the Ganges in the north 24 parganas district of Bengal. It is serene, peaceful and full of natural attractions. It was here at Halisahar, that Sri Srivasa Pandita had relocated from mayapur, after the sannyasa initiation of Sri Caitanya Mahaprabhu. It was also here at Halisahar that the great Sri Sivananda Sena and his son Sri Kavi karnapur ,the author of Gaura Gannodesha Dipika, used to reside. The worshipable deities of Sri Srinatha Pandita, the spiritual master of Sri Kavi Karnapur, still accept our humble service at the Krishna Raya temple in Halisahar. Halisahar is also the birthplace of Isvara puri, the spiritual master of Lord Caitanya.‘The Gaudiya Treasures of Bengal’ has covered its visit to Sri Isvara Puri’s birthplace in a separate article entitled – ‘Caitanya Doba ,Halisahar – The birthplace of Isvara Puri’. We are very thankful, that by the causeless mercy of these great personalities and by the mercy of Sri Guru and Gauranga, we could visit this part of Gaura Mandala bhumi, and associate with the highly elevated devotees who have dedicated their lives serving this holy dham.

Accommodation – There are a number of nearby hotels near Halisahar where one can choose to stay – like Hotel Aquatic palace (on kalyani expressway), Geetanjali Palace, etc. Since this place is hardly an hour’s ride from kolkata, one can choose to stay in Kolkata as well and then travel to Halisahar to obtain darsana of this exalted dham.As not many devotees reside and serve in this temple, the pilgrims are advised to make prior arrangements of their own prasadam.