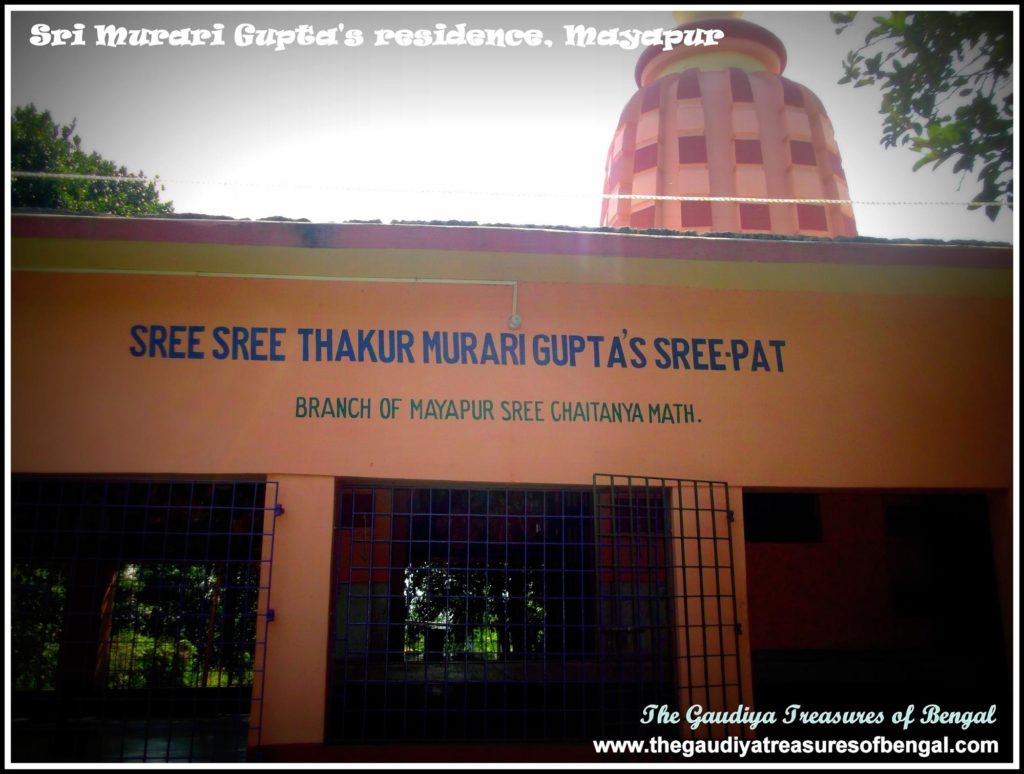 Situated east of Yogpeeth,on the banks of Ballal Dighi, lies the house of Sri Murari Gupta. He was born at Srihatta (Sylhet, presently situated in Bangladesh) ,the hometown of Jagannatha Misra, but moved over to Navadvipa while he was a very young boy.The residence of Murari Gupta is a stone’s throw from Srivasa Angan (house of Srivasa Pandita) and is situated hardly a kilometer from the Iskcon Mayapur temple. He was a contemporary of Lord Chaitanya and used to study in the same toll (school) as Mahaprabhu. Although he was a scholar and senior to Mahaprabhu ,yet he could not defeat Him in debates and logical arguments.Lord Chaitanya used to tease Murari by raising different topics of discussion and subsequently defeating him in them. Sri Murari Gupta was an intimate associate of Mahaprabhu and was the 21st branch of His desire tree of devotional service .At Murari Gupta’s house ,are presently worshipped the beautiful deities of Sri Ram, Sita, Lakshmana and Hanumana. We, from ‘The Gaudiya Treasures of Bengal’ consider ourselves exceedingly blessed to have been able to take darsana of his sripat, and smear our sinful bodies with the dust of this holy place.

Sri Murari Gupta was an Ayurvedic doctor (vaidya) by profession, but it has been mentioned in the revealed scriptures that such was the nature of his treatment, that his patients would be benefitted not only materially but spiritually as well. Sri Murari would prescribe medicines not only for the patient’s ailing body but bestow Krishna prema for his suffering soul.He regularly participated in the nightly sankirtana held at Srivasa Angan and satisfied Mahaprabhu greatly with his ecstatic singing and dancing.He was a treasure house of divine love and it is stated that his humility and meekness, melted the heart of Lord Gaurahari.

During the Mahaprakash lila (sat prahariya bhava pastime), Lord Chaitanya demonstrated His devotional ecstasy for 21 continuous hours, revealing the past identities of several of His intimate associates and granting them many boons. ‘The Gaudiya Treasures of bengal’ has covered in detail the Mahaprakash lila of the Lord in a separate article entitled – ‘Srivasa Angan ,Mayapur ,Navadvipa – Part 1: where Lord Gaurahari eternally performs His ecstatic pastimes’.During this pastime, the Lord revealed that Murari Gupta was actually the incarnation of Hanuman, the eternal servitor of Lord Rama. Sri Murari then received darsana of Sri Chaitanya as his worshipable Lord Ramachandra ,holding His bows and arrows.On His left stood mother Sita and on His right was brother Lakshmana.Surrounding them was an army of monkeys who sang hymns in praises of their lordships. Here it must be mentioned that Sri Gaurachandra being the Supreme Personality of Godhead Himself, is the source of all the other incarnations of the Supreme, including Lord Rama. When the Supreme Lord descends into this material world to perform His pastimes, all the other incarnations of the lord descend along with Him.Getting darsana of His beloved Ramachandra jiu, Sri Murari fainted upon the floor in ecstasy. When he came back to his senses, Sri Gauranga revealed that the real purport of Sri Murari Gupta’s name was that Murari (Krishna) ever lied hidden (Gupta) within his heart. 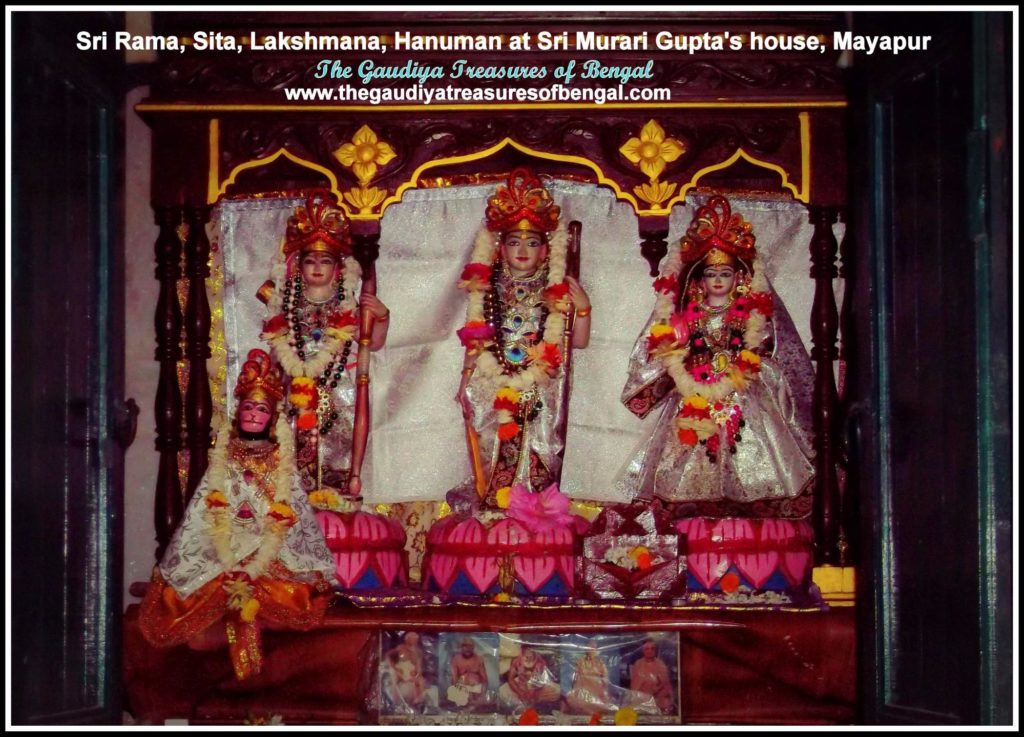 As per his request, the Lord granted Murari the boon that he would always accompany the Lord wherever the Lord incarnated to manifest His magnanimous pastimes. The Lord loudly proclaimed that whoever found faults within Murari, would incur such a terrible sin that even millions of dips into the holy Ganges would not be able to rescue them.

During an earlier pastime, Sri Chaitanya tested Murari’s devotion unto Lord Rama , when He asked Murari to worship Sri Krishna instead. Though both Rama and Krishna are one and the same, yet Murari Gupta, being an incarnation of Hanuman, was eternally inclined to worship the blissful form of Ramachandra jiu.Such was Murari’s dilemma that he decided to give up his body committing suicide as neither could he abandon the worship of Sri Ramachandra nor could he reject the words of lord Chaitanya. Lord Chaitanya was very pleased with Murari Gupta’s devotion and hailed it as a perfect example.

On another occasion, Sri Chaitanya ,became immersed in the mood of Varahadeva (Boar incarnation). Crying Boar !Boar! He rushed to the house of Murari Gupta, who was very dear to Him. Entering his altar, the lord revealed to him ,His beautiful form as the Boar-incarnation, and picked up a waterpot with His enchanting tusks. Seeing this form and relishing the mood of Gaurasundara, Murari was highly astonished. The Lord then ordered Murari to sing praises in His glorification. Murari then expressed that even Ananta Sesha, whose one hood carries the burden of millions of universes, cannot reach the ends of Lord’s glory with His thousands of hoods.From time immemorial Ananta deva is engaged in the service of narrating the Lord’s endless pastimes and He is yet to finish.So how could a mere mortal like Murari sufficiently glorify the Lord. In this way Murari expressed his helplessness.

Murari continued that even the Vedas, whose words are infallible and who are an accepted authority throughout the material creation, do not know the Lord in actuality. Unlimited universes emanate and merge into the pores of His blissful body. It is only by the mercy of the Supreme Lord that one can know Him in truth.

Being satisfied with Murari the Lord sighed how the mayavadi sannyasis of kasi describe Him as not having hands, face or mouth.In other words they describe Him as Nirakar (without any form). The lord roared loudly and explained that His form is completely transcendental and spiritual (sat,cit ,ananda) in nature. Even a mere touch of His body can spiritualize and purify anything. Then How dare these mayavadis claim that He has no form ? The Lord then revealed how He had cursed one of such bogus sannyasis with leprosy but yet that person did not come to his senses.

Lord Gaurahari then revealed how He had once rescued mother Earth (avani) incarnating as Varahadeva (boar incarnation) and how by the mercy of His mere touch she became pregnant. Mother earth subsequently gave birth to a powerful child named ‘Naraka’, unto whom Lord Varahadeva imparted all good teachings and instructions. King Naraka initially protected the brahmanas and the devotees as per the shastric injunctions.But in due course of time, Naraka ,fell down owing to his bad association with king Vena, and started causing disturbances and acted cruelly against devotees.The Lord could not tolerate harm to His beloved devotees and thus He was forced to kill His own son.Lord Chaitanya narrated this pastime to reiterate His promise ,that like His previous incarnations, He would annihilate the miscreants, in order to protect His devotees from any aggression.This amazing conversation took place 500 years ago at the residence of Sri Murari Gupta, in Mayapur.

On an ending note !

Once while the lord and His associates were seated at Srivasa Angan, Murari Gupta approached them and paid them his humble obeisances.But while doing so, he paid his respects to Nityananda Prabhu ,after he had first paid his respects to Lord Chaitanya.Lord Chaitanya appeared in Murari’s dream that night and revealed to him that Nityananda prabhu was His elder brother.Thus the Lord imparted this teaching to Murari that one must first pay his obeisances to Haladhar Nityananda and then subsequently bow down to Sri Chaitanya.The very next day, Murari Gupta approached the devotees and rectified his mistake.He now worshipped the lotus feet of Lord Nityananda first before paying obeisances to Lord Chaitanya and His actions pleased Mahaprabhu very much.

Sri Murari Gupta had recorded in his diary (known as ‘karcha’) the pastimes enacted by Lord Visvambhara in Nadiya.These detailed records in Murari Gupta’s karacha formed the very basis of the content of the Lord’s early pastimes (adi Lila) in the other renowned biographies such as – Sri Chaitanya Caritamrta, Chaitanya Bhagavata and Chaitanya Mangala.Sri Murari Gupta has also blessed us with an amazingly enchanting composition of his own ,known as Sri Chaitanya Carita Maha Kavya,  which narrates the ecstatic pastimes of Lord Gaurahari in Navadvipa.

This ancient site of Murari Gupta’s residence is being today looked after by the devotees of the Chaitanya Math.The deities of Sri Ram, Sita, Lakshmana & Hanuman are daily worshipped here with due diligence.

We worship the lotus feet of our spiritual master ,whose causeless mercy has empowered us ineligible fools ,to gain entrance and take up service in this transcendental abode of Sri Mayapur. We seek shelter of this holy land, and pray that its glories remain forever imprinted in our heart.‘The Gaudiya Treasures of Bengal’ offers millions of obeisances and humbly prays to Sri Murari Gupta that we advance in our Krishna consciousness, develop attachment unto the lotus feet of Lord Gauranga and are able to serve Sri Guru & Vaishnavas, by our honest and sincere efforts. We seek his blessings and compassion , in successfully rendering this humble service of reciting the pastimes and revealing the pastime places of the Supreme Lord and His beloved associates.We shall consider ourselves greatly fortunate and our existence meaningful if Lord Gaurahari and our dear spiritual master are kindly pleased with our endeavours.

Mayapur lies within Antardvipa, the sacred island at the junction of Jalangi (yamuna) and the Ganges. Mahavana, situated at the very center of Vrindavana, the highest spiritual realm, is non different to Mayapur. Navadvipa is like a beautiful lotus flower with its eight islands assuming the shape of eight petals.Antardvipa, the best of the islands, is situated as the central whorl of this lotus like transcendental abode. 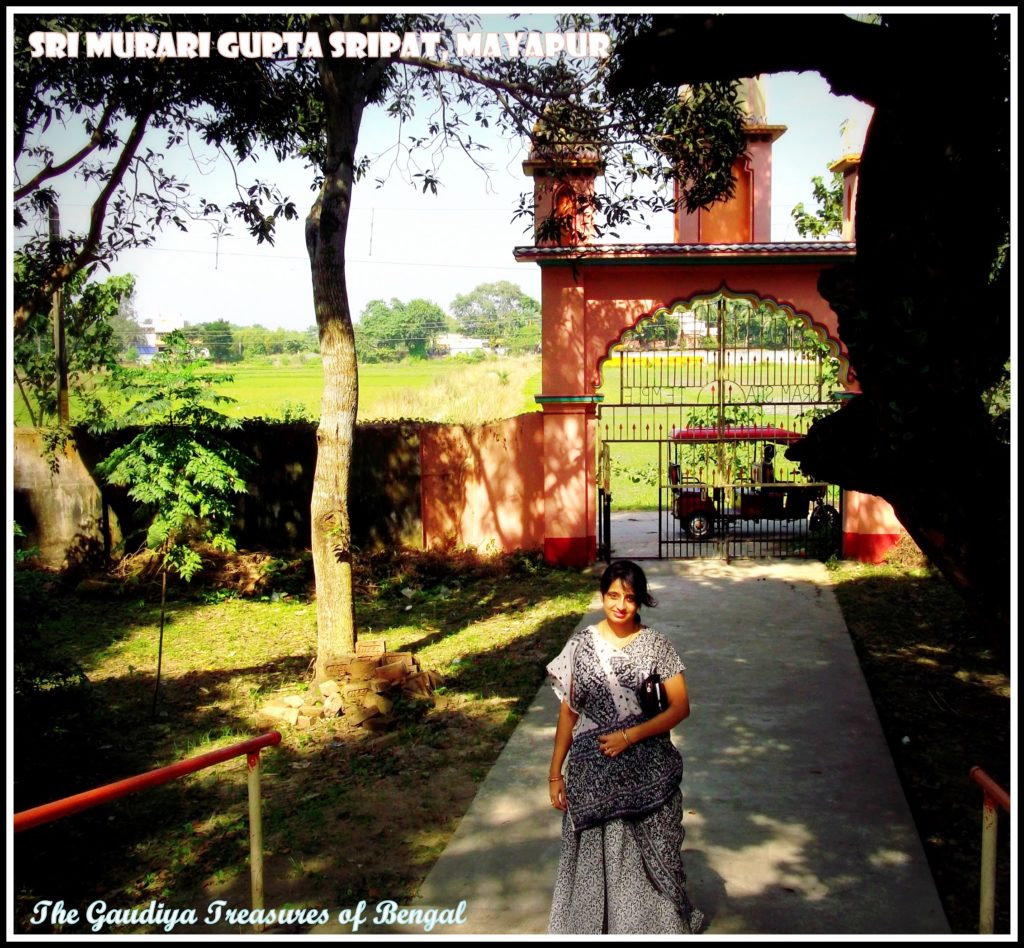