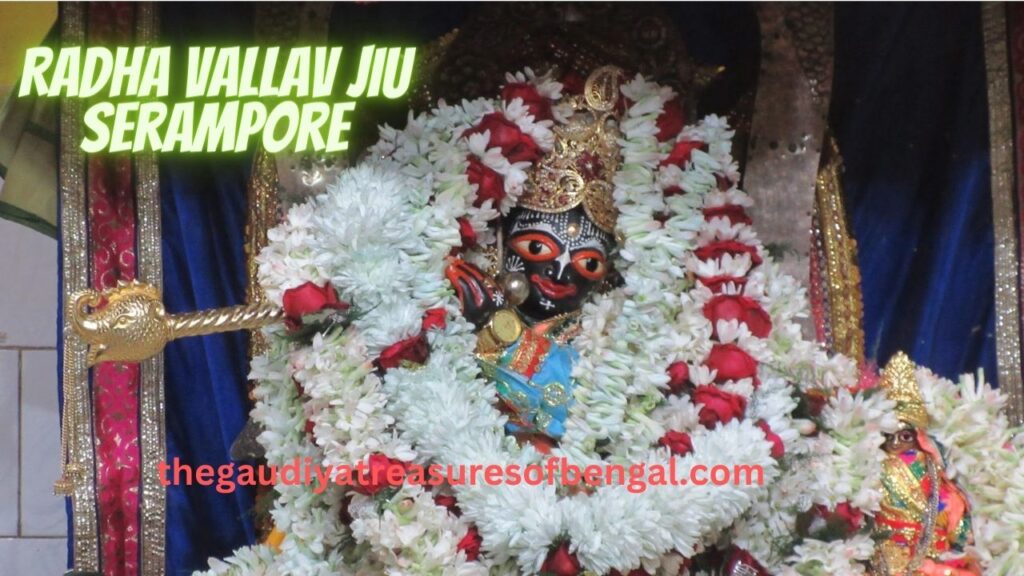 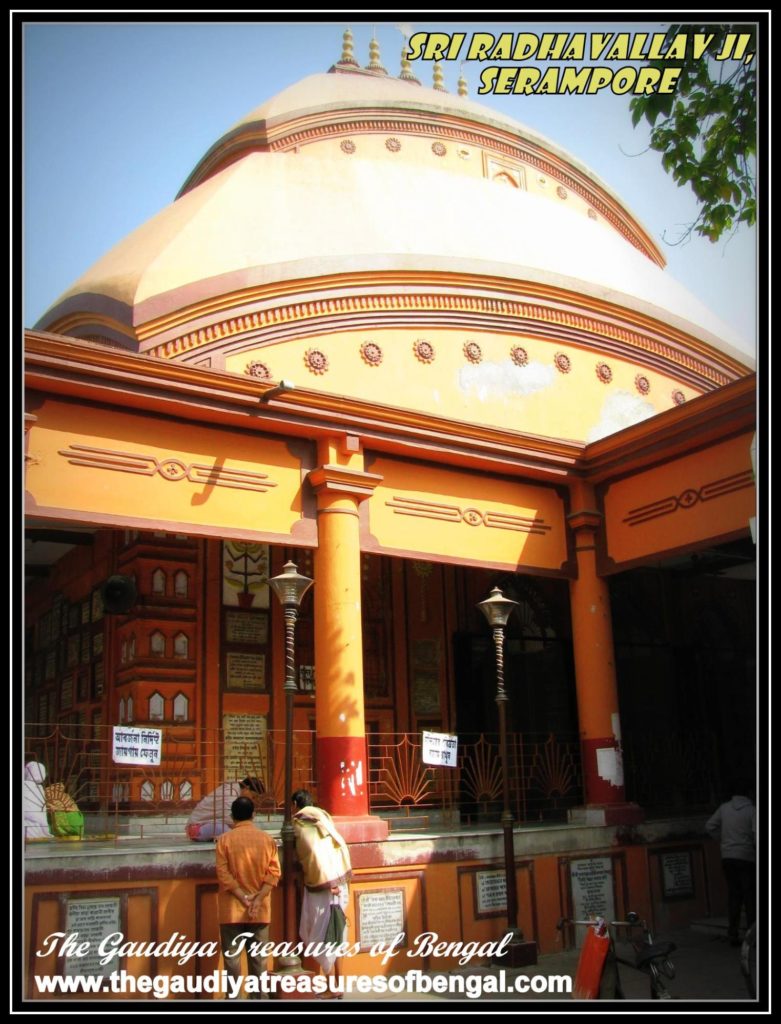 The original temple was constructed by Yogi Rudraram pandita, and was later rebuilt by Zamindar Sri Nayan Chand Mallick of Kolkata .His son Sri Nimai Charan later arranged for the Nitya seva (daily service) of the lordships. Sri Nayan Chand Mallick and his son Sri Nimai Charan were devout vaishnavas and have properly engaged their financial resources in constructing and rebuilding several significant temples all over Bengal for the pleasure of the Lord and His devotees (refer – ‘The pious Mullicks of Bengal’).

Serampore came across as a very auspicious town to us.The very air over here seems to be spiritually surcharged, and can easily bestow devotion to one even if he is an atheist. The beautiful darsana of Sri RadhaVallav jiu is an icing on the cake; a sight that inspires you to seek the higher taste. We found the devotees to be very cordial and they were very happy to let us know the history and heritage of this marvellous temple. 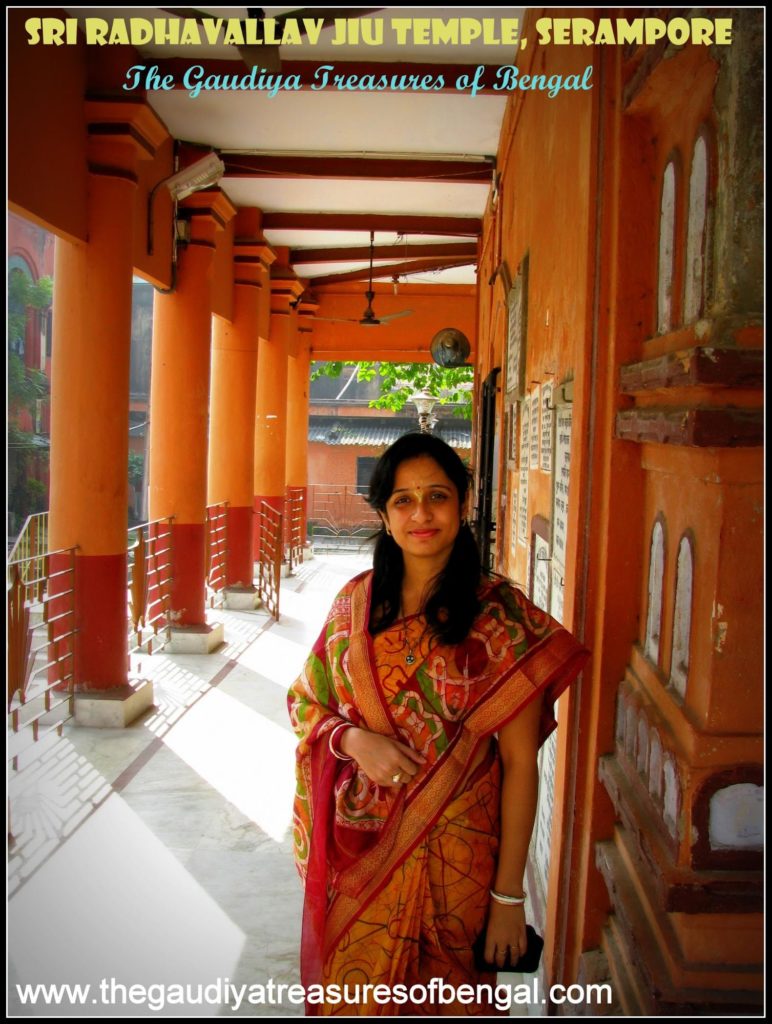 We worship the lotus feet of our spiritual master ,whose causeless mercy has empowered us ineligible fools ,to gain entrance and take up service in this exalted abode of Serampore. We seek shelter of this holy land, and pray that its glories remain forever imprinted in our heart.‘The Gaudiya Treasures of Bengal’ offers millions of obeisances and humbly prays to Sri RadhaVallav Jiu that we advance in our Krishna consciousness, develop attachment unto their lotus feet and are able to serve Sri Guru & Vaishnavas, by our honest and sincere efforts. We seek their blessings and compassion , in successfully rendering this humble service of reciting the pastimes and revealing the pastime places of the Supreme Lord and His beloved associates.We shall consider ourselves greatly fortunate and our existence meaningful if Lord Gaurahari and our dear spiritual master are kindly pleased with our endeavours.

A brief sketch of Serampore :

Serampore, is one of the most important towns in the state of West Bengal and has a population of around 2,00,000. The abovementioned pastimes of Sri Radhavallav jiu took place here around 500 years back. This place has always been well connected with rivers, and has hence seen businesses thrive.The manufacturing and export of jute has been one of its very popular trade in recent times. The Mughals, the Danes,the British have all been attracted to Serampore and have successfully conducted their trades here. Serampore is hardly an hour’s drive from kolkata and is well connected via road and the railways. However, the most significant contribution of Serampore has been its eternal connection to Gaudiya Vaishnavism. 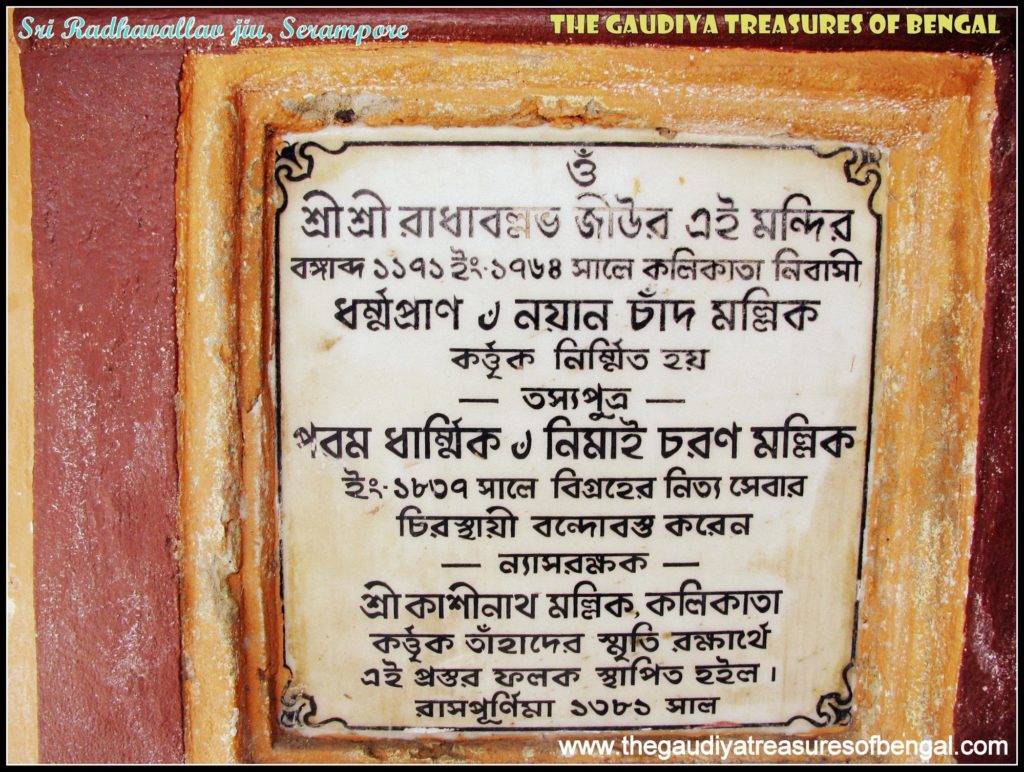 Great devotees like Kamalakar Pippalai (Please refer the article  – ‘Sri Jagannatha Temple of Mahesh, Serampore’), Kashishwar Pandita (Please refer the article  – ‘Kashishwar pith ,Chatra, Serampore’) have spent several years living and serving the Lord of their lives here at Serampore. Enchanting Radhavallav jiu had also desired to be installed and served here. One can only stand back and stare at the great fortune that the residents of Serampore have amassed over millions of their previous births in order to get an opportunity to reside and serve at this holy place.

Take a train from the Howrah station to reach Serampore. Once you reach there, you can take an auto/rickshaw to reach the temple of RadhaVallav jiu.

Accommodation – As Serampore is not even an hour’s ride from kolkata, it is recommended that one stay in Kolkata and then travel to take darsana of the exalted sites of Serampore . One can choose to stay at any of the hotels (there are many) in Kolkata. The devotees are advised to contact the authorities of Sri RadhaVallav jiu temple to avail their prasadam.