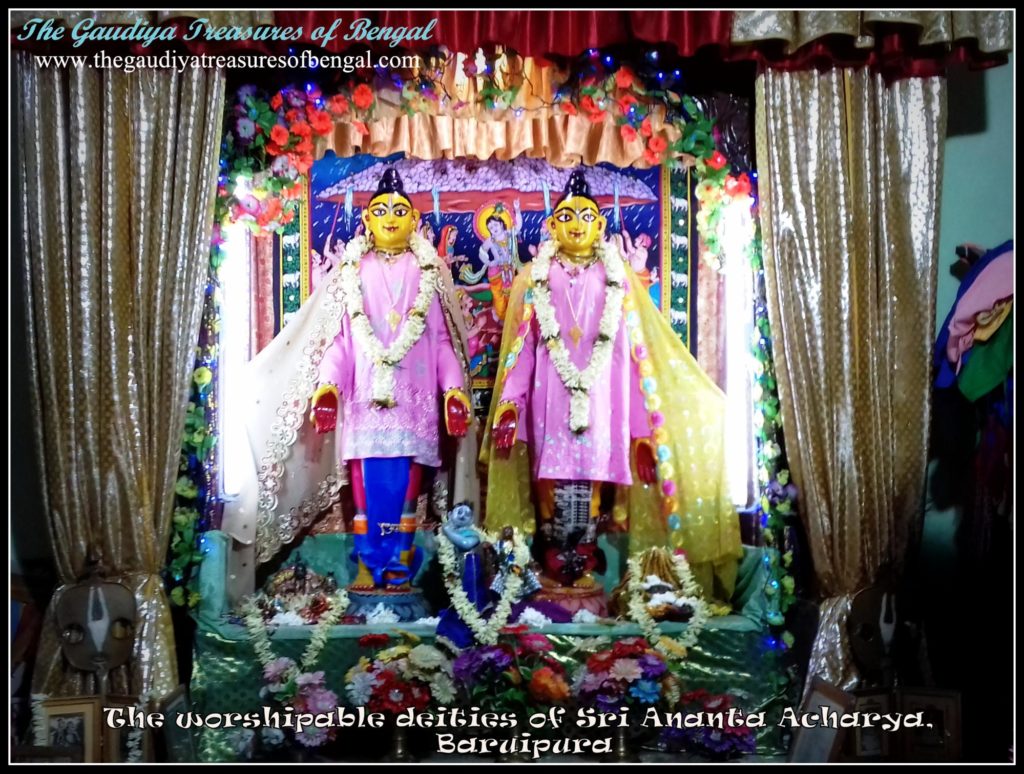 Sri Ananta Acharya was one of the dearest followers of Sri Advaita Acharya. Sri Advaita is one of the major branches to have arisen out of Sri Caitanya’s desire tree of devotional service. Ananta Acharya is the ninth expansion to have originated out of Lord Advaita’s branch. It has been mentioned by Srila Prabhupada in his purport that though Sri Ananta was initially a follower of Advaita prabhu, he later on became a prominent devotee of Gadadhara pandita (Caitanya Caritamrta, Adi 12.58). Caitanya Caritamrta exclaims that the body of Ananta Acharya has always been overwhelmed by the ecstasy of Krishna Prema. He was a reservoir of all good qualities and he was advanced in all respects.Not much is mentioned about Sri Ananta Acharya, but from Caitanya Caritamrta, we come to know that he had a dear disciple named Pandita Haridas (not to be confused with Haridasa Thakura), who had been the chief servitor at Sri Radha Govinda Dev jiu temple in Vrindavana. Sri Krishnadasa Kaviraja highly glorifies the vaishnava qualities of Sri Haridasa Pandita in the Adi lila of Caitanya Caritamrta (Adi 8.55) .Srila Krishnadasa recalls that Haridasa Pandita was one of the devotees who had requested him to compose Caitanya Caritamrta, the exalted biographical work on Lord Caitanya’s life and teachings. ‘The Gaudiya Treasures of Bengal’ has covered the pastimes of Srila Krishnadasa Kaviraja in a separate article entitled – ‘Jhamatpura (Near Katwa) – Residence of Srila Krishnadasa Kaviraja Goswami’

Sri Bhaktisiddhanta Saraswati Thakura mentions in his anubhashya that Sri Ananta Acharya is an eternal associate of the Supreme Lord. Sudevi, one of the eight principal gopis of Vrindavana,had incarnated as Sri Ananta Acharya in Lord Caitanya’s pastimes. Sri Sarvabhauma Bhattacharya’s house in Sri Jagannatha Puri, is today known by the name ’GangaMata Matha’. This Matha (monastery) was originally established by Sri Ananta Acharya. Ganga Mata, the princess of Puntiya (located in the Rajshahi district of the present-day Bangladesh), abandoned her home and opulence, in order to accept initiation in Ananta Acharya’s line of disciplic succession. She had later brought a deity named Sri Rasika Raya, from the king of Jaipur ,and installed Him in the house of Sri Sarvabhauma Bhattacharya. This matha(monastery) subsequently came to be known by her name. 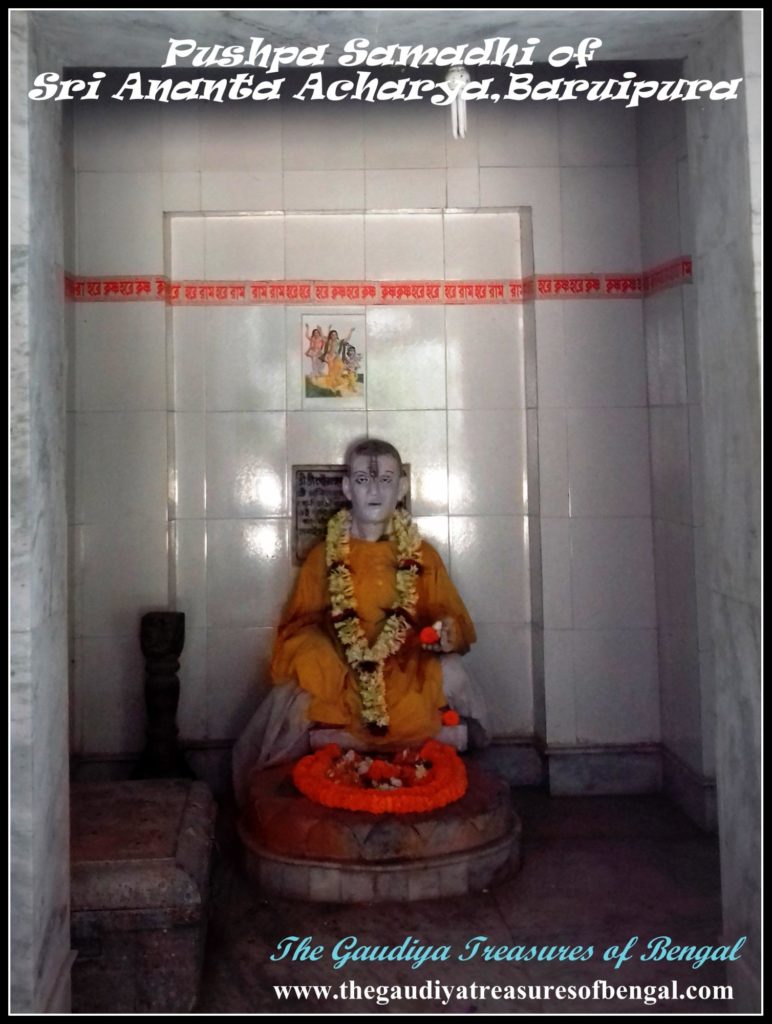 We can have the great fortune of taking darsana of Sri Ananta Acharya’s worshipable deities and his pushpa samadhi here at his sripat. When we visited this place, we found the local devotees to be very cooperative and friendly. The dham is currently being nicely managed and maintained by the devotees of Pathbari ashram. The building has been properly renovated and is presently three storeys high. The worshipable Gaur-Nitai deities of Sri Ananta Acharya and his pushpa samadhi are located in the ground floor itself. There are beautiful Jagannatha , Baladeva Subhadra deities and deities of Sri Rama, Laxmana Hanuman that are worshipped in the other floors of this building.

We worship the lotus feet of our spiritual master ,whose causeless mercy has empowered us ineligible fools ,to gain entrance and take up service in this exalted abode of Baruipura. We seek shelter of this holy land, and pray that its glories remain forever imprinted in our heart.‘The Gaudiya Treasures of Bengal’ offers millions of obeisances and humbly prays to Sri Ananta Acharya that we advance in our Krishna consciousness, develop attachment unto the lotus feet of Lord Gauranga and are able to serve Sri Guru & Vaishnavas, by our honest and sincere efforts. We seek his blessings and compassion , in successfully rendering this humble service of reciting the pastimes and revealing the pastime places of the Supreme Lord and His beloved associates.We shall consider ourselves greatly fortunate and our existence meaningful if Lord Gaurahari and our dear spiritual master are kindly pleased with our endeavours.

The team from ‘The Gaudiya treasures of Bengal’ drove all the way to Baruipura to reach the Sripat of Sri Ananta Acharya. It is hardly a one hour ride from kolkata. We need to avail the eastern metropolitan bypass and stick to it till we reach Baruipura. The place is also well connected via buses and trains. Once we reach Baruipura, we need to search for Baruipura High school. The Sripat of Sri Ananta Acharya is a stone’s throw from the school. The Sripat is locally renowned as ‘Mahaprabhu tala’, or the place that has been graced by Sriman Mahaprabhu.

Accommodation – As Baruipura is not even an hour’s ride from kolkata, it is recommended that one stay in Kolkata and then travel to take darsana of this exalted site. One can choose to stay at any of the hotels (there are many) in Kolkata. The devotees are advised to contact the temple authorities of Sri Ananta acharya’s sripat at Baruipura to avail their prasadam. 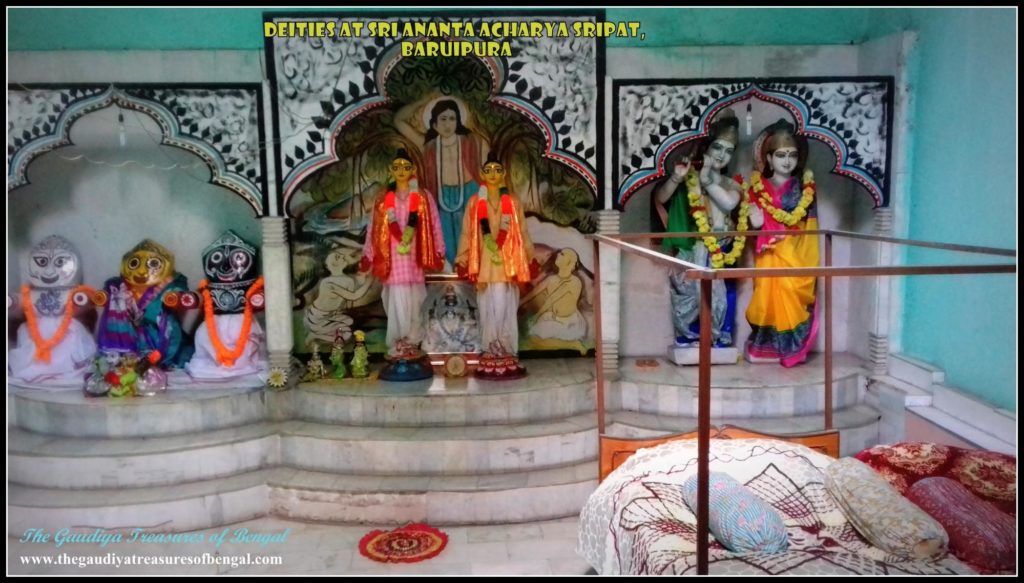