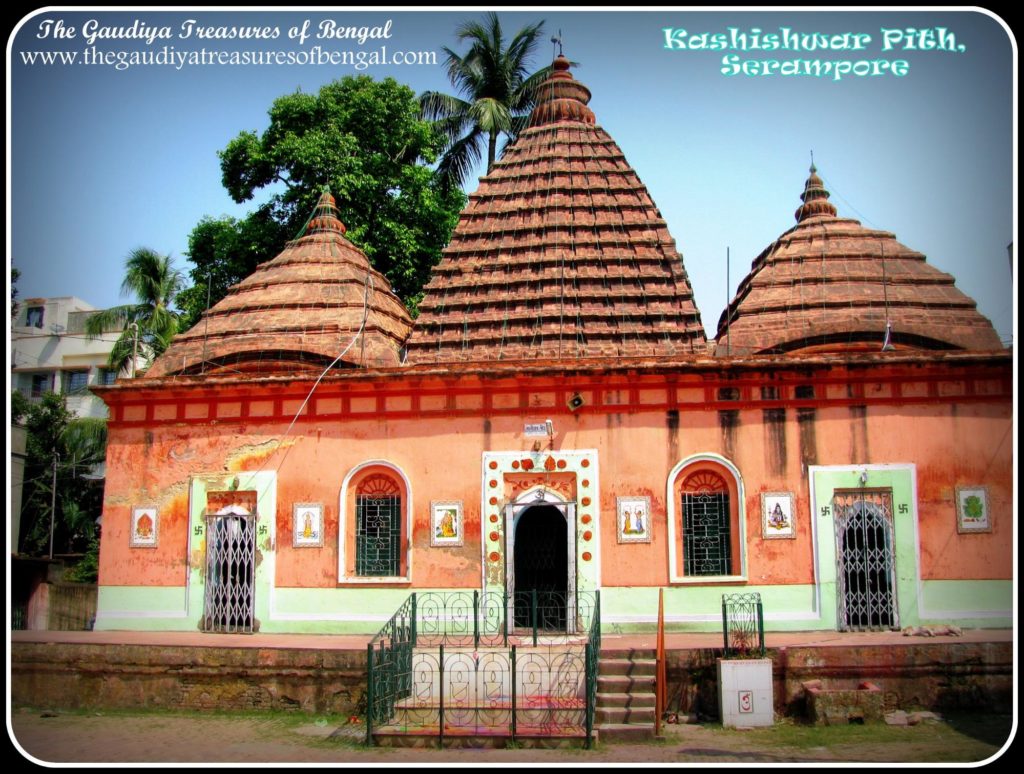 However, before Kashishwar Pandita went over to Jagannatha Puri, he stayed and served his deities here at Chatra, in Serampore. He was a brahmana and his last name was Chowdhury. As a matter of fact, when ‘The Gaudiya Treasures of Bengal’ visited his temple residence in Serampore,we discovered that the area was referred to as ‘Chowdhury Para’ or the locality of the Chowdhurys .We later confirmed from the temple priest that the majority of the residents of this locality belonged to Sri Kashishwar pandita’s family lineage. 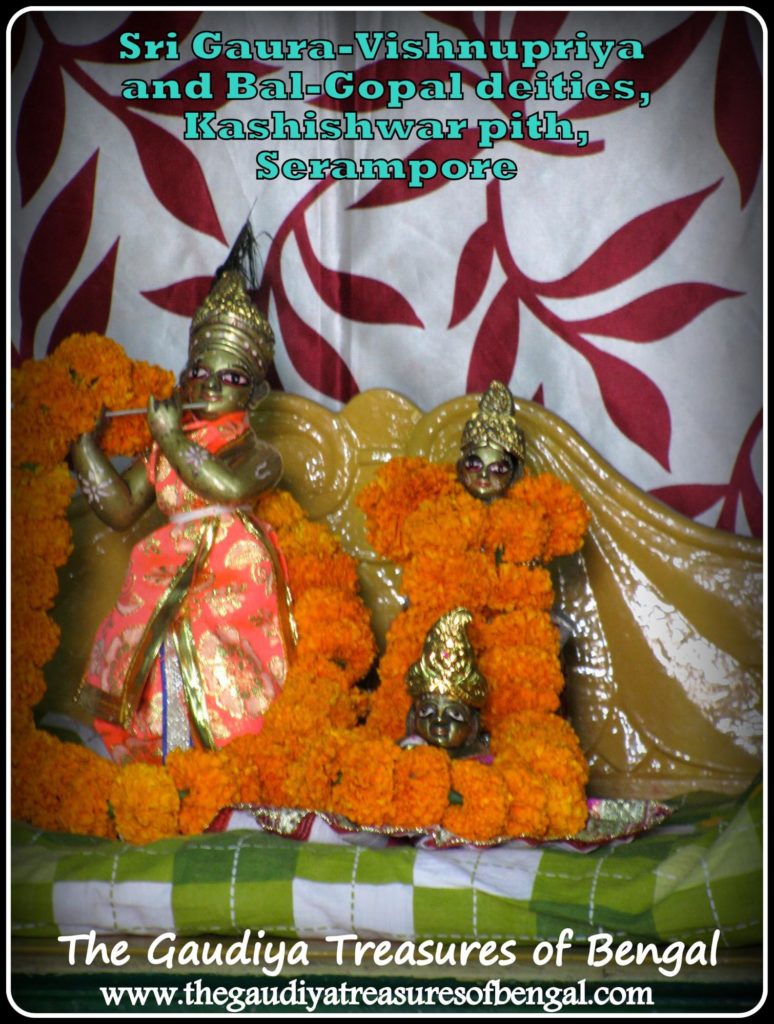 Today, the place where he had stayed and served ,is renowned as Kashishwar pith. This is an extremely old place dating back to 1455 AD. The temple has since been renovated over time and is currently being maintained by the trustees, who primarily are his family descendants. Sri Caitanya Mahaprabhu had visited this place and met Sri Kashishwar pandita, while He was on His way to Jagannatha Puri. How can we sufficiently glorify this place? Sri Kashishwar pith, is sanctified by the dust of the Supreme Lord’s lotus feet. Sri Kashishwar pandita, an intimate associate of the Lord, had spent many years over here ,serving his beloved deities.

Apart from Sri Gaura-Vishnupriya, there is also a Radha Krishna deity which is currently being served here. There is also another old deity of Sri Krishna which is kept along with all the abovementioned deities.  ‘The Gaudiya Treasures of Bengal’ learnt from the temple priest that this old Krishna deity was also served personally for a few days by Sri Kashishwar pandita. After He had passed away, the priests of the temple ,used to carry this Krishna deity to the house of the different devotees and offer Him bhoga. On one such occasion, the deity fell off from the then-priest’s hand, and unfortunately His leg got broken. After this incident, the temple authorities initially decided to immerse the broken deity into the Ganges. But after taking alternative opinions, they decided otherwise, and this deity is today also worshipped in the altar along with the other deities. 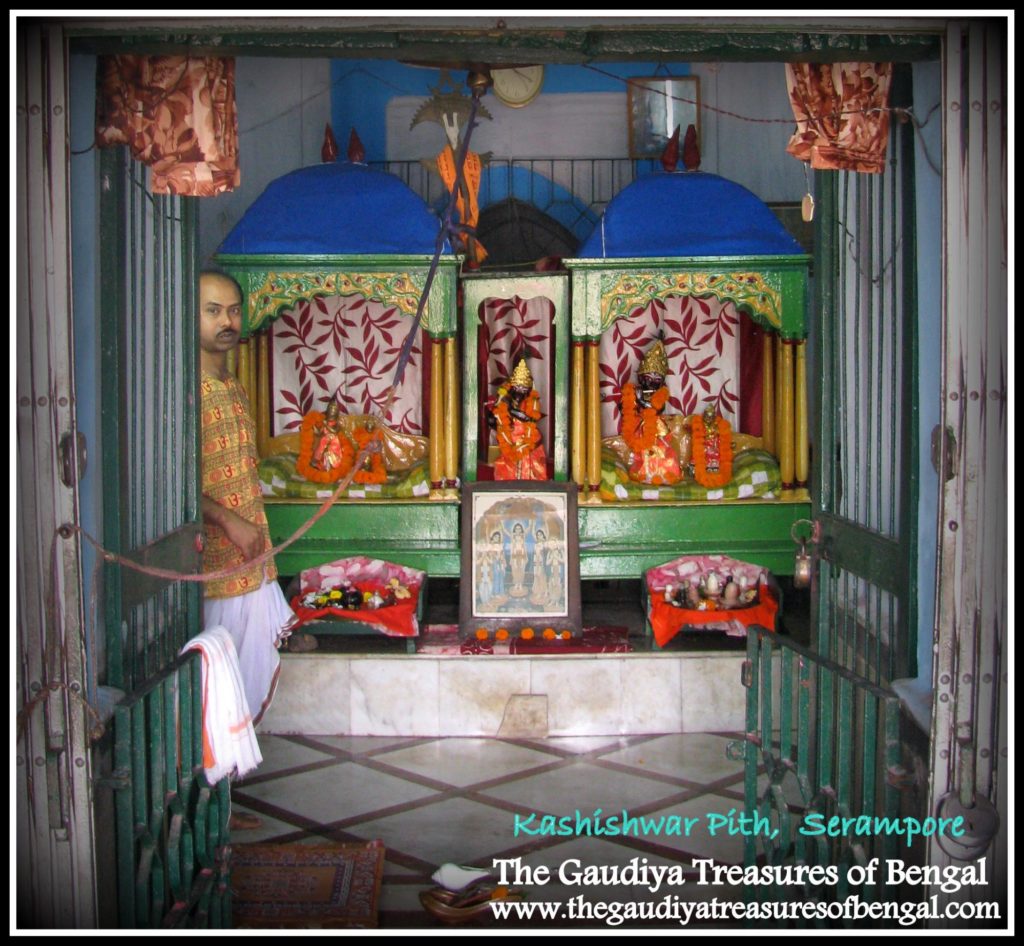 Festivals like Gaura Purnima ,Rasa Purnima,Janmashtami are celebrated at Kashishwar pith with great pomp and show. Srila Kashishwar pandita’s tirobhava tithi is also celebrated here with all due diligence.

Kashishwar pandita is instructed to go to Vrindavana:

The article would be incomplete without the mention of how later on, Sri Caitanya Mahaprabhu mercifully utilized Sri Kashishwar Pandita as a medium to introduce His own  deities in the western provinces of India. After the discovery of Sri Radha Govinda dev jiu in Vrindavana, Lord Caitanya instructed Sri Kashishwar to travel to Vrindavana and assist Sri Rupa Goswami in serving these deities. But Sri Kashishwar felt great pain at heart and didn’t want to abandon Lord Caitanya. He lamented piteously and expressed that he would not be able to bear the separation from the Lord’s personal association. Knowing his heart, Lord Caitanya then gifted Sri Kashishwar a beautiful deity of Himself, that resembled Him exactly and explained how the deity was non-different from Him.On arriving in Vrindavana, Kashishwar pandita placed this Deity of Lord Caitanya (which came to be subsequently known as Gaura-Govinda) on the right side of Sri Govinda Dev jiu, and dedicated the rest of his life in serving them. This was the first deity of Lord Caitanya that had arrived in Vrindavana.All of this was possible due to the intense love that Sri Kashishwar possessed for Sri Caitanya Mahaprabhu.

On a closing note:

We worship the lotus feet of our spiritual master ,whose causeless mercy has empowered us ineligible fools ,to gain entrance and take up service in this exalted abode of Serampore. We seek shelter of this holy land, and pray that its glories remain forever imprinted in our heart.‘The Gaudiya Treasures of Bengal’ offers millions of obeisances and humbly prays to Sri Kashishwar Pandita that we advance in our Krishna consciousness, develop attachment unto the lotus feet of Lord Gauranga and are able to serve Sri Guru & Vaishnavas, by our honest and sincere efforts. We seek his blessings and compassion , in successfully rendering this humble service of reciting the pastimes and revealing the pastime places of the Supreme Lord and His beloved associates.We shall consider ourselves greatly fortunate and our existence meaningful if Lord Gaurahari and our dear spiritual master are kindly pleased with our endeavours.

‘The Gaudiya Treasures of Bengal’ travelled to this place driving all the way from kolkata. We took the GT road, by the ganges, to reach Serampore. After reaching Serampore we asked the locals the directions to reach Chatra. On reaching Chatra, we enquired about Sri kashishwar pith. One important thing to note in this regard ,is that the place is locally referred to as ‘Doltala Bari’.

The place is a bit remote and one needs to cross over narrow lanes to reach here. However the locals are very friendly and we faced no difficulties as such ,in locating this sacred place.

Accommodation – As Serampore is hardly an hour’s ride from kolkata, it is recommended that one stay in Kolkata and then travel to take darsana of the exalted sites of Serampore. One can choose to stay at any of the hotels (there are many) in Kolkata. One can also opt to stay in the guest house of Iskcon Kolkata (3c Albert Road, Near Minto Park).

A brief sketch about Serampore :

Serampore, is one of the most important towns in the state of West Bengal and has a population of around 2,00,000. The abovementioned pastimes took place here around 500 years back. This place has always been well connected with rivers, and has hence seen businesses thrive.The manufacturing and export of jute has been one of its very popular trade in recent times. The Mughals, the Danes,the British have all been attracted to Serampore and have successfully conducted their trades here. Serampore is hardly an hour’s drive from kolkata and is well connected via road and the railways. However, the most significant contribution of Serampore has been its eternal connection to Gaudiya Vaishnavism. Great devotees like Kamalakar Pippalai, Kashishwar Pandita have spent several years living and serving the Lord of their lives here at Serampore. Enchanting Radhavallav jiu also desired to be installed and served here. One can only stand back and stare at the great fortune that the residents of Serampore have amassed over millions of their previous births in order to get an opportunity to reside and serve at this holy place.