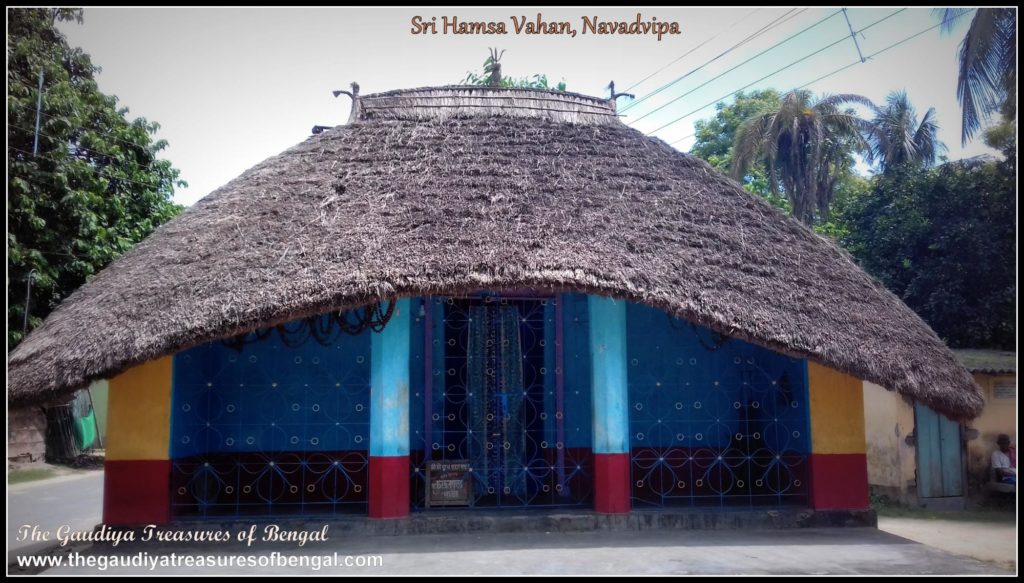 Srimad Bhagavatam reveals that Lord Shiva is the foremost of all the Vaishnavas.

Some people with incorrect sambandha gyan (knowledge of relationship with Supreme) falsely claim that Lord Shiva is the Supreme Personality of Godhead. However the scriptures state otherwise. The scriptures unambiguously mention that Lord Shiva is a devotee of the Supreme Lord and in fact he is a devotee of the highest order. The Mohini murti pastime, wherein Lord Shiva was bewildered by the supreme Lord who took the form of a beautiful attractive woman, or the pastime of Bhasmasura , wherein Lord Shiva had to flee from the asura unto whom he had bestowed several benedictions a while before, clearly reflect the superiority and the position of Lord Krishna as the Supreme.

In fact,Shiva is always meditating and hankering to render service unto Sri Krishna who is his dear beloved Lord. In Caitanya Mangala, it is described how Lord Shiva once became mad with ecstasy after honoring a tiny morsel of Krishna Prasadam which he had received from Narada Muni. Such were his feelings, that he began loudly singing and dancing. The dance slowly became more and more vigorous and took the shape of ‘Tandava’, a dance that is usually performed at the time of annihilation. As the whole world started shaking, the helpless demigods approached mother Parvati requesting her to console her husband. We can thus clearly understand how dear Krishna and His remnants are to Lord Shiva. 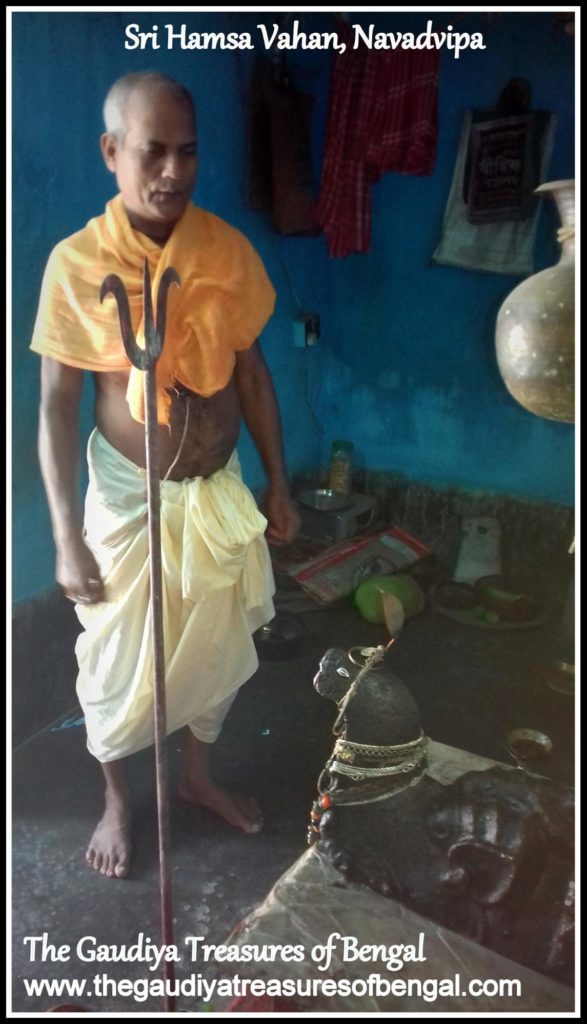 On another occasion , Shiva ,being attracted to the Lord’s rasa lila, took the form of a Gopi, to serve and participate in the Lord’s rasa pastimes.As a result Shiva is also worshipped as Gopeshwar Mahadeva in Vrindavana, where he, serving as the gatekeeper, protects the Rasa mandali (the site of the Rasas) and bestows Krishna prema (love unto Krishna) upon his worshippers. In the evening this deity of Gopeshwar Mahadeva (Shiva dressed as a Gopi) is decorated as a beautiful Gopi to commemorate his desires to participate in the Rasa Lila of the Lord.

‘The Gaudiya Treasures of Bengal’ would also like to mention here, that Lord Shiva is the original spiritual master of a bonafide Vaishnava disciplic succession , known as the ‘Rudra sampradaya’. The succession has been named after him.Sri Vishnuswami, the founding acharya of this sampradaya, received this supreme knowledge of Krishna consciousness (devotion unto Krishna) from the greatest Vaishnava, Lord Shiva himself.

Now that we understand the position of Lord Shiva, let us delve deeper and relish the ecstatic devotion that he possesses towards the Supreme Lord.

In the Satya yuga, the seven sages – Kashyapa, Atri, Vasistha, Visvamitra, Gautama,Jamadagni and Bharadvaja hankered dearly for the treasure of Gauranga prema (love unto Lord Caitanya). Seeing their steadfastness, their father, Lord Brahma became greatly pleased and advised them to at once go to Navadvipa Dham and immerse themselves in singing and chanting the glories of Caitanya Mahaprabhu.The sages took their father’s instructions to their heart and soon took shelter of the exalted Navadvipa Dham.The sages underwent severe austerities for several years ,constantly engaging themselves in Gauranga Bhajana.Feeling compassionate upon the sages, Lord Gauranga ,along with His associates, appeared before them and gave them His blissful darsana.

The sages prayed to Gaurahari for His mercy and requested for the boon of pure devotional service unto Him. Lord Visvambhara blessed them and asked them to abandon all their inclinations towards Jnana (speculative knowledge) and Karma (fruitive activities) , and only indulge in discussing the glories of the Supreme Personality of Godhead. He assured that very soon, in the age of kali, He would re-appear in this transcendental abode of Navadvipa, to unfold His magnanimous sankirtana pastimes, during which the sages shall get the opportunity to receive His association once more.Saying thus the Lord and His associates disappeared from their view.The Lord had bestowed His enchanting darsana unto the sages during mid-day (madhyana), and since then this place came to be known as Madhya dvipa. One residing at this exalted place achieves devotion unto Lord Gaurahari, even without adhering to strict rules and regulations.

Lord Nityananda then further revealed that at the beginning of this age of kali, the sages headed by Saunaka Rishi, assembled here at Madhya Dvipa ,to relish the nectarian pastimes of Lord Gaurahari, from the lotus mouth of Suta Goswami. During this time, Lord Shiva became greatly anxious to attend this lecture as well. Abandoning his bull carrier ,which travelled very slowly, Lord shiva hence ascended the much faster Swan carrier of Lord Brahma, in order to quickly reach the assembly of the sages.So it was here at Madhya Dvipa, that Lord shiva , along with his associates, sang the glories of Lord Gauranga and danced in ecstasy.’The Gaudiya Treasures of Bengal’ is greatly fortunate to visit Madhya Dvipa and take darsana of this small yet beautiful temple of Hamsa Vahan , that has been established to commemorate this sublime pastime. In this temple is worshipped a magnificent deity of Lord Shiva, who is postured sitting on the Swan Carrier of Lord Brahma. The word ‘Hamsa’ means ‘Swan’ and ‘Vahan’ translates to ‘Carrier’ in bengali. The deity is exceedingly old and no one knows exactly how ancient it is.The deity was discovered by a few localites who went for fishing in the nearby Gomati river. A great festival takes place here every year in the month of Caitra (March- april) during which the devotees from all over the world pour water on this beautiful deity of Hamsa Vahana. Water is poured in order to cool down the deity as it gets heated up by himself. It is said that the deity gets heated up ,as Lord shiva in this mood is very eager and anxious to hear and relish Caitanya Katha (pastimes of Lord Caitanya) in the assembly of the sages. 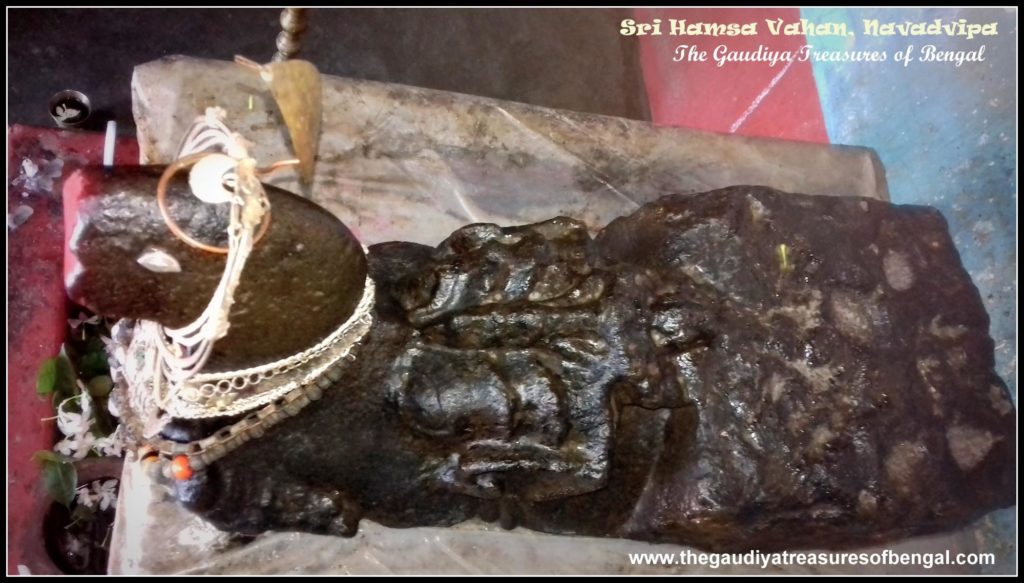 The temple priest also narrated to us an amazing pastime, in which he believes that Lord Shiva himself had once rescued his life. The priest once suffered from some complications in his body and all the doctors had practically given up on any hopes of his survival. He consulted not only the doctors of Navadvipa, but eminent doctors of Kolkata as well.Day and night he sat helpless at the temple compounds and prayed for mercy. Then suddenly one day an effulgent personality appeared before him and blessed him. The priest was awestruck to behold the divine sight and could not utter any words. From the very next day, he gradually started recovering.By the grace of Sri Hamsa vahana ,the priest is completely fit and healthy these days.

Few miles down the road, in the island of Godruma, is located the beautiful temple of HariHara. This temple lies on the eastern bank of the Alakananda river that used to once flow over here.The amazing deity of Hari Hara , who is half Lord Shiva (white) and Half Lord Vishnu (Black) is worshipped here with due reverence. This deity of Harihara was rescued from the midst of the surrounding forest.The place came to be subsequently known as HariHara kshetra (the land of HariHara).This half Vishnu-half Shiva deity signifies how dear Lord Shiva is to the Supreme Lord. 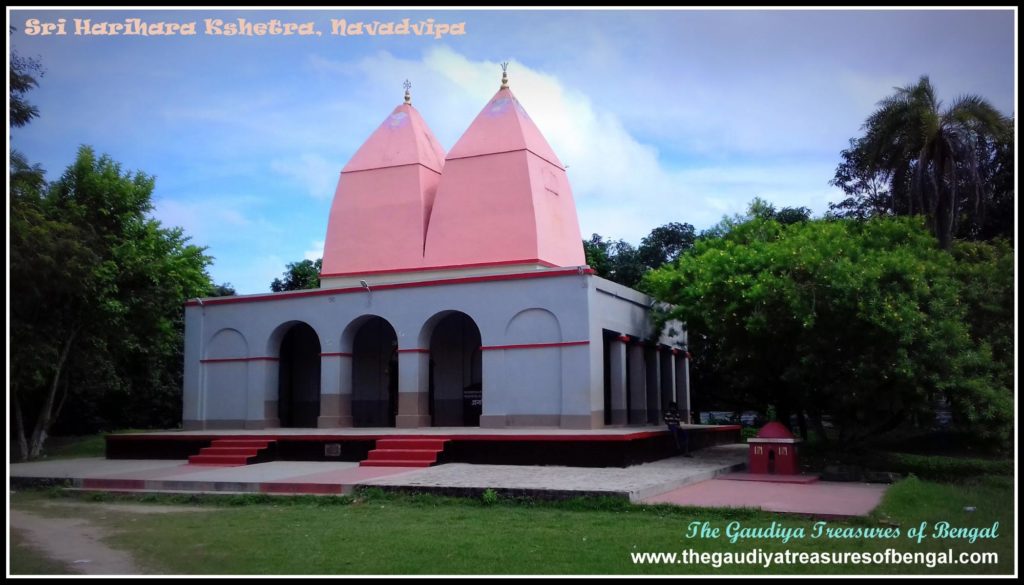 Lord Nityananda revealed to Jiva Goswami , that this land, was non-different from Kasi. Kasi ,situated in varanasi (a place in North India), is famous for being the land of mayavadi sannyasis (impersonalists) who try to attain liberation by cultivation of knowledge (jnana). But this Kasi of Navadvipa, is much superior to that of Varanasi, as Lord Shiva is eternally engaged here in singing the glories of Lord Gaurachandra and dancing in ecstasy. Lord shiva ,here at Hari-Hara Kshetra , begs his followers to accept devotion unto Gauranga. Hence this dham is also known as Maha-Varanasi (Greater Varanasi).Lord Shiva personally chants the name of Gauranga into the ears of any living entity who passes away at this place, thereby liberating them. Thus at HariHara Kshetra , there is no fear of death.While Nityananda Prabhu was thus explaining the glories of this place, Lord Shiva, being invisible to everyone, came and bowed down at Lord Nitai’s lotus feet.All of these pastimes are vividly recorded by Srila Bhaktivinoda in his ‘Navadvipa Dham Mahatmya’. 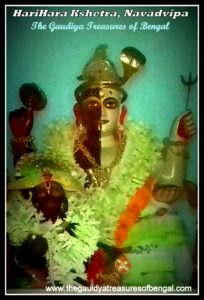 Srila Bhaktivinoda Thakura mentions elsewhere in his Gaura Arati bhajana, how Shiva, Sukadeva goswami and Narada Muni are eternally engaged in the transcendental loving service of Lord Gaurachandra; how their voices get choked up in ecstasy of divine love for Mahaprabhu. All these pastimes help us fallen souls relish the sweet relationship that these personalities share with the Supreme Lord.

The temple worship that is carried out today at both Hamsa Vahana and Harihara kshetra is regular but not very opulent. The priest usually makes his offerings unto the Lord, only twice a day, during which the devotees can take darsana of the deities. For rest of the day, the temples usually remain closed (except on festival days).We observed that the kitchen of the Hamsa Vahana temple has been constructed and renovated with the help of the Navadvipa Mandal Development trust.

We worship the lotus feet of our spiritual master ,whose causeless mercy has empowered us ineligible fools ,to gain entrance and take up service in this transcendental abode of Navadvipa.We seek shelter of this holy land, and pray that its glories remain forever imprinted in our heart.‘The Gaudiya Treasures of Bengal’ offers millions of obeisances and humbly prays to Sri Hamsa Vahana and Sri Harihara that we advance in our Krishna consciousness,develop attachment unto the lotus feet of Lord Gauranga and are able to serve Sri Guru & Vaishnavas, by our honest and sincere efforts. We seek their blessings and compassion , in successfully rendering this humble service of reciting the pastimes and revealing the pastime places of the Supreme Lord and His beloved associates.We shall consider ourselves greatly fortunate and our existence meaningful if Lord Gaurahari and our dear spiritual master are kindly pleased with our endeavours.

One travelling from kolkata is advised to board a Krishnanagar local train from the Sealdah station. On reaching Krishnanagar, one can book a Cab/Autorickshaw to directly reach these ancient temples of Hamsa Vahana and HariHara.These places are not very far from the residence of Srila Bhaktivinoda Thakura at Surabhi Kunja. However,one not well acquainted with these places, is advised to book a cab from ‘Gauranga Travels’ (office within Iskcon Mayapur temple premises) and ask them to take him around these ancient sites. 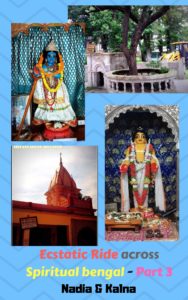