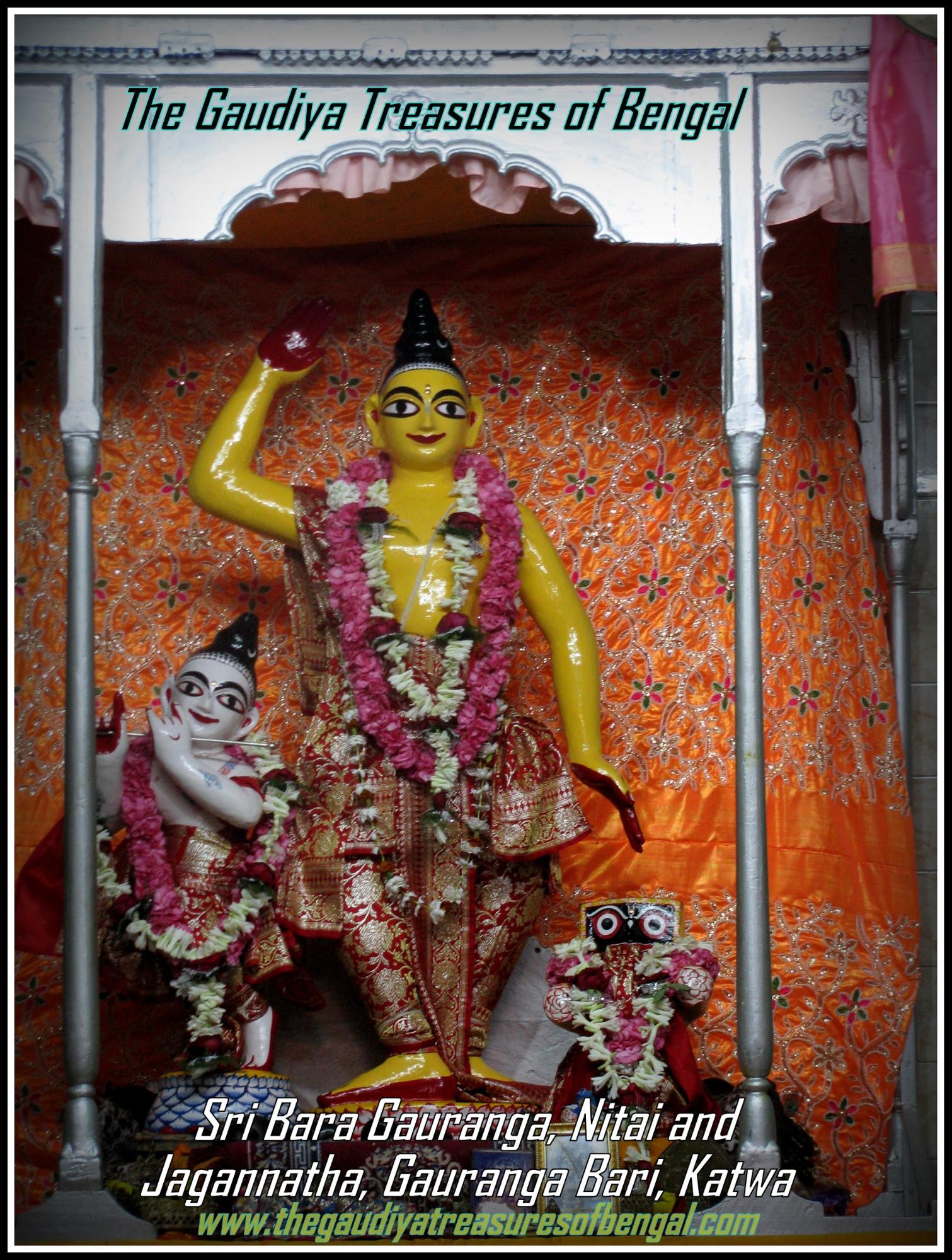 It was here at Sri Gauranga Bari, that the supreme personality of Godhead, Sri Nimai pandita, was awarded with the sannyasa order of life by the eminent sannyasi ,Sri Keshava Bharati ,about 500 years ago, and was conferred with the new name ,Sri Krishna Caitanya. This is the same place where the beautiful hairs of Sri Nimai pandita were shaved off forever, by the barber named Madhu, who wept bitterly as did all the other devotees, who couldn’t tolerate the Lord of their lives relinquishing His beautiful curly hair .That hair ,decorated with malati flowers , which previously in Dvapara, had enchanted the gopis and forced them to abandon their homes,families and everything in their possession; that same hair which Lord Brahma, Shiva and Narada used to greatly glorify ,was now abandoned. The team from ‘The Gaudiya Treasures of Bengal’ considers itself supremely fortunate to have been able to arrive and take darsana here at Sri Gauranga bari, on the auspicious occasion of Sri Gaura purnima and participate wholeheartedly in the celebrations. We have covered the appearance pastime of Sri Gaurahari in a separate article entitled –  ‘YogPeeth, Mayapur, Navadvipa – The birthplace of Sri Caitanya Mahaprabhu’).

Lord Gaurasundara’s head shaving and sannyasa ceremony took place during the auspicious constellation of Makara Sankranti,in the month of Magh, here at Gauranga Bari,in Katwa. Instead of picking up his razor, the barber Madhu, sat hanging his head between his hands and cried profusely.Madhu could realize that Sri Nimai pandita was the Supreme Lord and he requested Him again and again to reconsider His decision of accepting the sannyasa order. We have covered in detail the pastimes of Madhu, the barber ,in a separate article entitled- ‘Sakhi Akhra and Madhai Tala ,Katwa’. 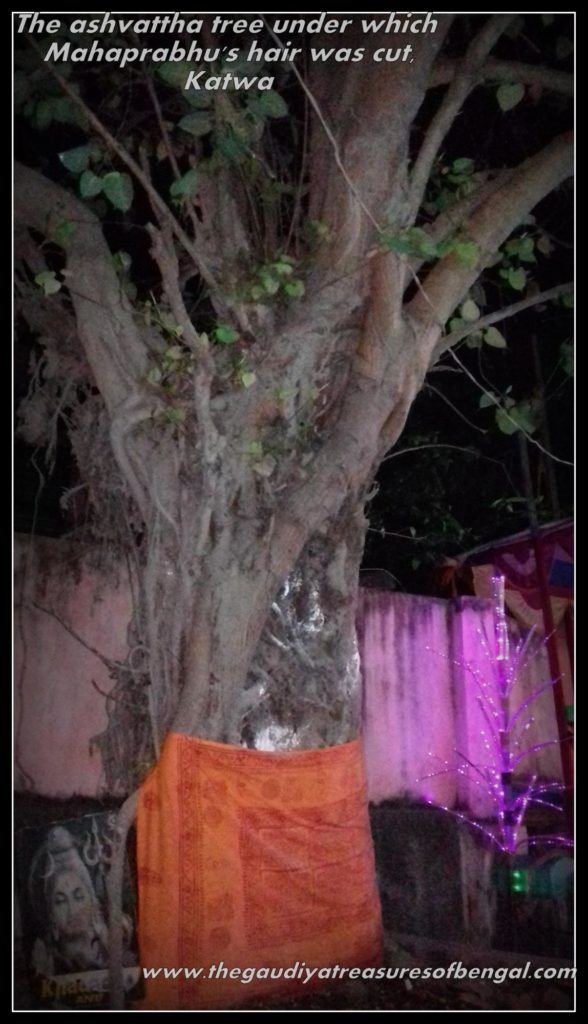 Even Sri Keshava Bharati urged Mahaprabhu to rethink about His decision.But Mahaprabhu was determined. Sri Nityananda Prabhu and all the other devotees who were present, as if gave up their lives in grief. The demigods, who also witnessed the events incognito, shed their tears. Even the bricks and stones, melted from within.

Meanwhile ,as the news of Mahaprabhu’s sannyasa spread far and wide, the people of Nadia felt as if they had been struck with a bolt of lightning.Saci Mata and Vishnupriya devi fell onto the ground and began crying piteously. Being bereft of full consciousness , they repeatedly cursed their lives.Holding onto a garland of Sri Vishwambhar,Srimati Vishnupriya wanted to enter into a fire and burn herself to death.Banging her hands onto her heart,Saci Mata repeatedly called out “Nimai, Nimai ! “. A faint sound of “Nai, Nai !” (‘Nai’ means not present) as if echoed back from the “Nidayar Ghat” (the merciless bank from which Nimai had crossed over the Ganges to leave for Katwa) .Beloved Nimai Pandita was no more in Nadia.

“Oh goddess (Ganga)! Being heartless, as you have allowed Nimai to cross over forever for sannyasa, you know for certain that this ghat of yours shall remain defamed from this day as Nirdaya Ghat”  (nidaya or nirdaya- heartless, merciless; ghat – bank of river).

Finally, at the end of the day ,Sri Gaurasundara’s captivating hairs were shaved. The tearful Madhu threw off his razors in the Ganges and vowed never to use it again.He cursed the profession, which induced him to perform such a ghastly offense. From that day onwards, Madhu Napit (barber) became Madhu Moira (sweet maker) and spent his days meditating upon the blissful form of Sri Gaurasundara. 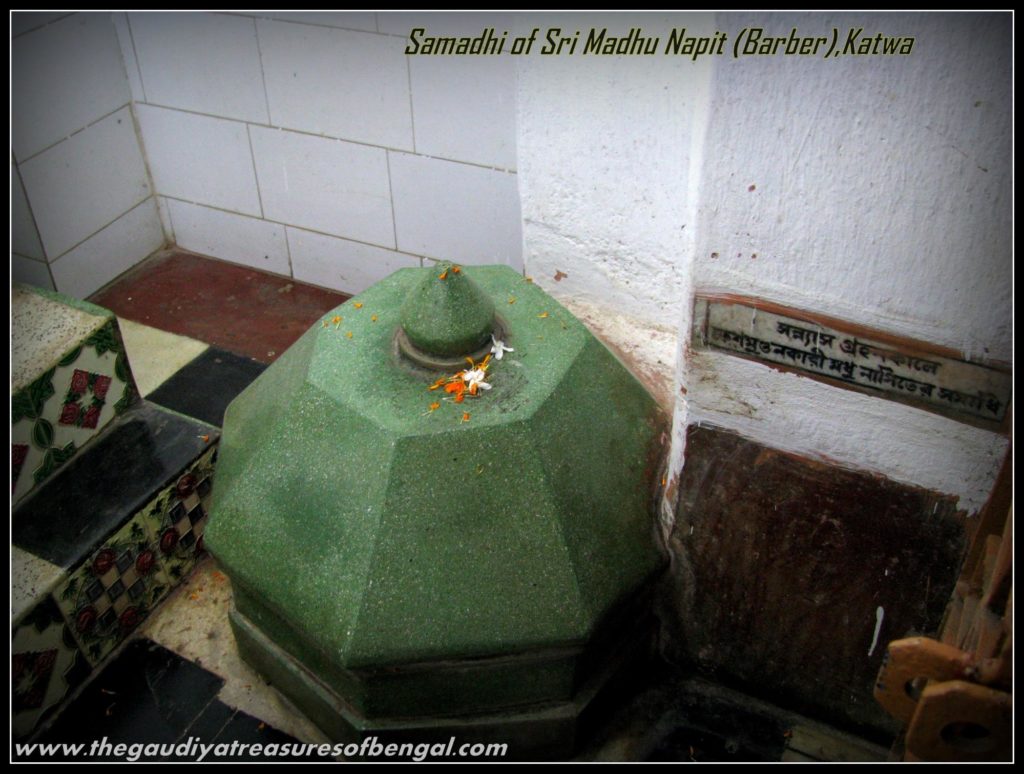 Lord Vishwambhar then bathed in the Ganges.Upon returning, He seated Himself at the designated place so that the initiation ceremony could begin.The Lord informed Keshava Bharati that a great personality had appeared in His dream and had uttered a sannyasa mantra to Him. He then whispered the mantra in the ears of Keshava Bharati, and in this way, the Lord, very cleverly initiated Keshava Bharati before he could initiate Sri Gauranga.Sri Keshava Bharati then uttered the same mantra in the ears of the Lord thereby awarding Him sannyasa.The Lord then accepted the ekadanda sannyasa stick and kamandulu. Upon seeing this the assembly exploded with loud chanting of the Lord’s holy names.The beauty of the Lord ,dressed in saffron, decorated with the marks of tilaka adorning His body, surpassed that of millions of cupids. 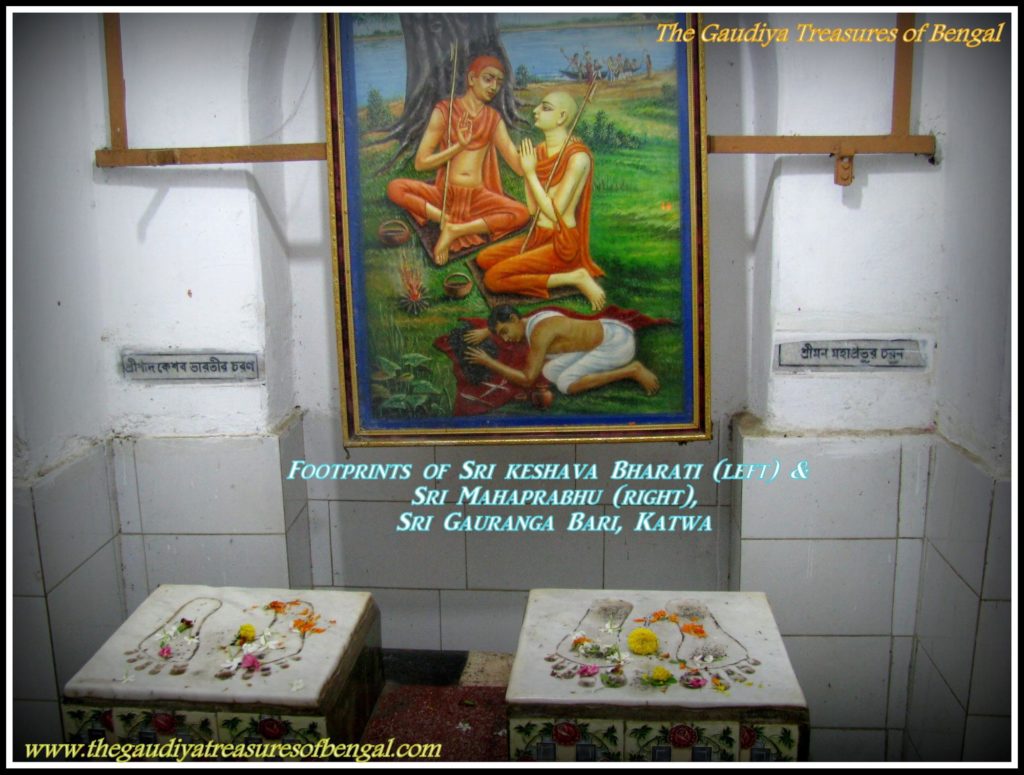 Only five devotees accompanied the Lord to witness His sannyasa initiation – Nityananda prabhu, Mukunda Datta, Chandrasekhara Acharya,Brahmananda and Gadadhara Pandita.Under the influence of Devi saraswati, Sri Keshava Bharati, awarded Nimai with the name- ‘Krishna Caitanya’.This name was befitting the most magnanimous Lord, as He induced one and all to chant the holy names of Sri Krishna thereby awakened their dormant consciousness (Caitanya).

Lord Caitanya was inundated with Krishna prema and began roaring very loudly.Tears of love flowed without cessation from His reddish eyes. He sang and danced in ecstasy. Sri Caitanya embraced His spiritual master, Sri Keshava Bharati ,who  then also joined in the sankirtana and danced with Him all night.

The devotees cried,laughed and rolled over the ground being completely devoid of external consciousness. Those fortunate souls who could witness the sannyasa initiation ceremony of the Lord became intoxicated with the love of Godhead. One such person was Gangadhara Bhattacharya, a brahmin, who being overwhelmed kept constantly crying “Ha Caitanya! Ha Caitanya ! Krishna Caitanya!” . Such was his intoxication in divine love for Mahaprabhu, that people nicknamed him as ‘Caitanya Das’. He and his wife lakshmipriya devi were blessed by Lord Caitanya, and as a result these fortunate souls could subsequently become the proud parents of Sri Srinivasa Acharya, the manifestation of Mahaprabhu’s ecstasy. ‘The Gaudiya Treasures of Bengal’ has covered the birth and pastimes of Srinivasa Acharya in a separate article entitled – ‘Sri Srinivasa Acharya’s Sripat, Jajigram (Near Srikhanda, Katwa)’

Sri Narahari Sarkar Thakura, who was a resident of the nearby Srikhanda village, had carved three very beautiful deities of Sri Caitanya Mahaprabhu, in order to reinject life into the devotees who were greatly saddened hearing the news of Mahaprabhu’s sannyasa. All these three deities depicted Sri Mahaprabhu ,in His previous ashrama,before He had accepted the sannyasa order. These deities depicted the Lord in His intoxicated enchanting  dancing form (Rasaraja Mahabhava). All the three deities were carved out of Neem wood. (We have covered the life and pastimes of Sri Narahari Sarkar in a separate article entitled – ‘The Great Vaishnavas of Srikhanda’).

Out of these three deities, the one that was the tallest was sent to Sri Gadadhara Das, so that he could serve Him here at Sri Gauranga Bari. Sri Gadadhara Das constructed this Gauranga Bari temple ,at this sacred place, and began the daily worship of Sri Caitanya Mahaprabhu. This captivating deity ,being worshipped here, is also known as Bara Gauranga or Bara Thakura (“Bara” means “Big” in Bengali).

The great beauty of Sri Bara Thakura cannot be expressed in mere words. His attraction intoxicates all of the three worlds.
(Translated by ‘The Gaudiya Treasures of Bengal’)

Just beside the deity of Lord Caitanya, is a mesmerizing deity of Sri Nityananda Prabhu, who here manifests His threefold bending form, and plays His flute in the mood of Sri Balarama. Along with Sri Gaur Nitai, a small beautiful deity of Sri Jagannatha jiu is also worshipped in the altar.

We worship the lotus feet of our spiritual master ,whose causeless mercy has empowered us ineligible fools ,to gain entrance and take up service in this transcendental land of Katwa.We seek shelter of this holy abode, and pray that its glories remain forever imprinted in our heart.‘The Gaudiya Treasures of Bengal’ offers millions of obeisances and humbly prays to Lord Caitanya and His beloved associates that we advance in our Krishna consciousness,develop attachment unto their lotus feet and are able to serve Sri Guru & Vaishnavas, by our honest and sincere efforts. We seek their blessings and compassion, in successfully rendering this humble service of reciting the pastimes and revealing the pastime places of the Lord and His beloved associates.We shall consider ourselves greatly fortunate and our existence meaningful if Lord Gaurahari and our dear spiritual master are kindly pleased with our endeavours. 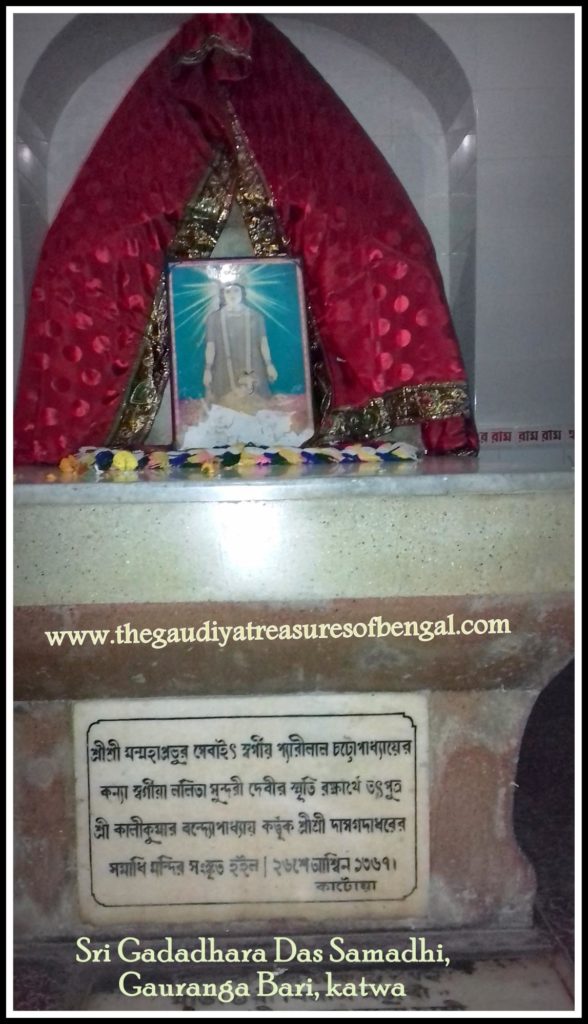 You can take a train from Howrah/sealdah station to reach the Katwa junction. The journey takes around 3.5 hours. On reaching there, you can take a rickshaw to directly reach Sri Gauranga Bari.Presently the temple is managed and the daily worship is carried out by the family descendants of Yadunandana, who was a disciple of Sri Gadadhara Das.

The transcendental land of Katwa is a witness to several intimate reciprocations between Sri Gaurasundara, the Supreme Lord, and His beloved associates.This place was initially known as ‘Kantaka Nagara’,from which the name ‘Katwa’ had later evolved.

Accommodation – One can choose to stay at Hotel Srabani in Katwa which is owned and governed by the local municipality. Or else, Navadvipa is hardly an hour and a half ride from Katwa. So the devotees can also choose to stay at Navadvipa / Mayapur and then travel to take darsana of Sri Gauranga bari.
If one stays in Katwa, one can avail prasadam at the ‘Gauranga Bari temple’. Else if one stays in Navadvipa, then he/she can honor prasadam at Iskcon Mayapur or any of the Gaudiya Mathas. 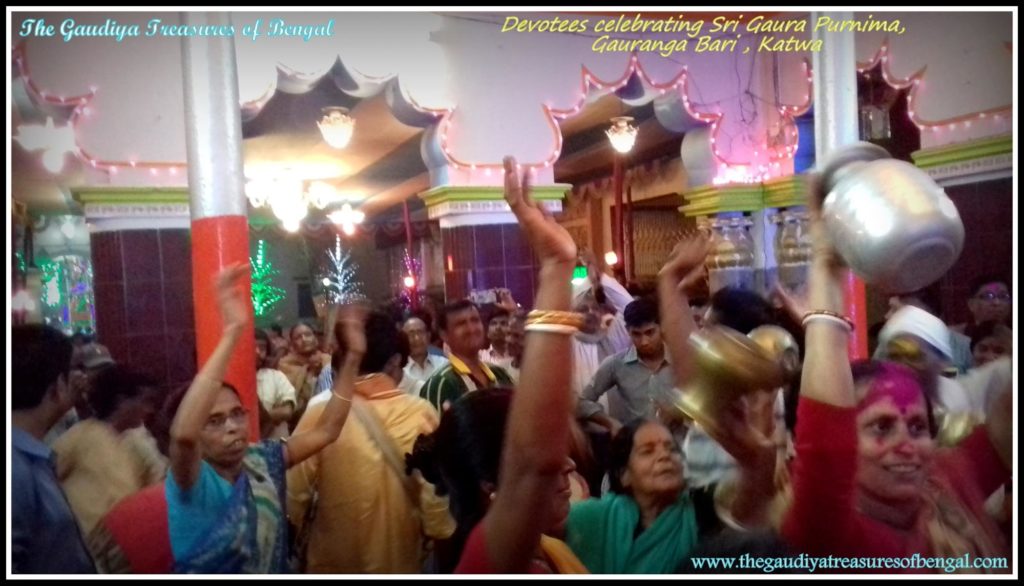 We leave you a heart melting composition of Sri Vasudeva Ghosh , that reveals the devastating effects of Nimai’s Sannyasa upon Saci mata and Vishnupriya devi. ‘The Gaudiya Treasures of Bengal’ has translated the composition into english for the pleasure of the devotees.

On not finding Mahaprabhu upon the sacred bed, where He had been resting for the last night, thunderbolt struck Srimati Vishnupriya devi. She feared that her fortunes had betrayed Her.Weeping incessantly, and not caring for Her untied hair and loosened dress,
She hurried to relate the news to Her mother in law, Saci mata.

Sitting at the doorsteps of Saci Mata’s room, Vishnupriya devi spoke with a faltering voice – Sri Gaurasundara was present at the room last night, but she was unaware where He has left at dawn, while she laid asleep. She expressed that Her situation was akin to a lightning striking upon Her head.

On hearing these words from her daughter in law, an apprehensive Saci mata, hurriedly woke up and came out of her room with her unattended hair and dress. As a matter of fact, she was constantly meditating upon her son and could not sleep for the night.

Immediately Saci devi lit up a lamp (as it was still dark) ,and began searching for her son here and there. Not finding any clues, Saci devi , accompanying Vishnupriya, went out onto the street and cried incessantly ,calling out Nimai ! Nimai !

Hearing her loud wails and cries, the local people of Nadiya rushed to the spot. All of them now began to search for their beloved Vishwambhar. Seeing a person passing by, all of them desperately caught hold of him, and began to enquire from him whether he had seen or has any news of Lord Gauranga.

The person informed them that he had seen Vishwambhar travel all alone ,towards the city of Kantaka Nagara (Katwa). Sri Vasu Ghosh laments and fears that his beloved Lord Gaurahari is about the shave His head and accept the renounced order of life. 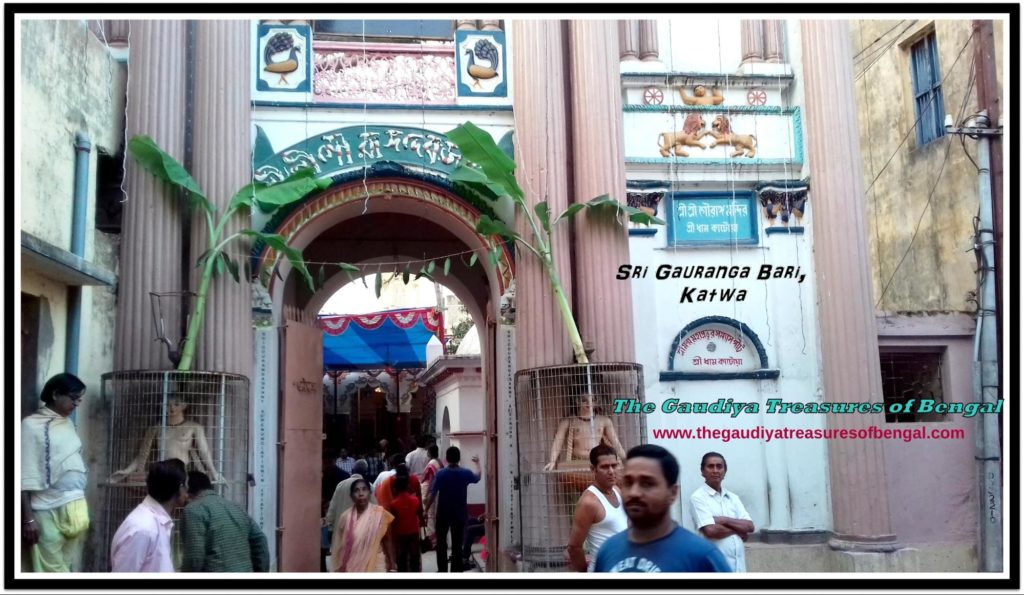 To Learn more about the exalted pastimes and pastime places of Burdwan, Bankura & kolkata ,purchase this below book from our bookstore. Click on the Image below : 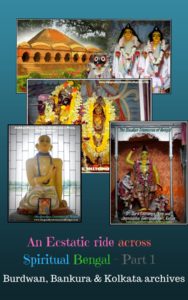