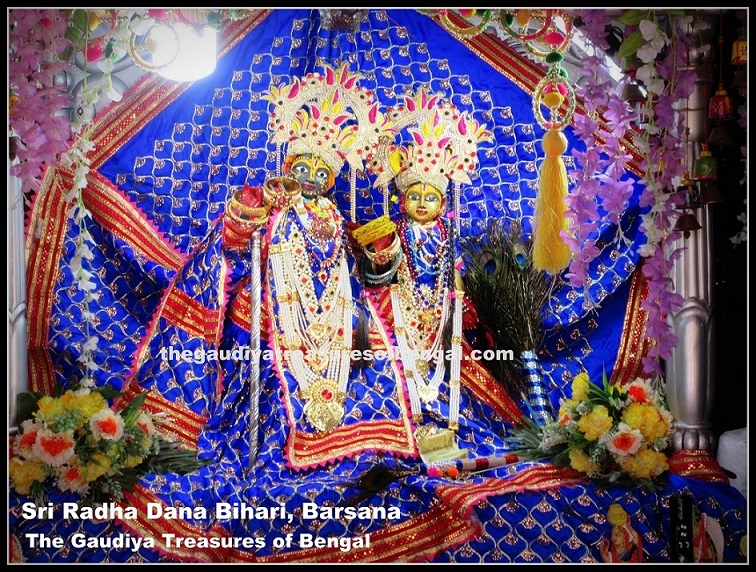 One of the four peaks of Brahmagiri Parvata in Barsana is Dana garh where Krishna’s Dana Leela pastimes had taken place. Everyday here at Dana garh, Krishna and His friends would try to extract taxes from the gopis. There is a beautiful temple of Sri Radha and Krishna built on top of this hill to commemorate this exalted pastime. Sri Krishna is lovingly worshiped here as Sri Dana Bihari jiu. On the pretext of carrying milk, butter, ghee, etc for worshiping the sun god, the gopis headed by Sri Radharani would pass through Dana garh everyday. And, every day, Krishna along with His cowherd friends would intercept the Gopis on their way. Acting as the tax collector, Krishna would then demand taxes in the form of milk products, before allowing the Gopis through.

So one day Krishna and His friends were sitting and eagerly waiting for Radhika and her friends to turn up. As soon as Krishna saw Radharani, He obstructed her path demanding taxes before He let her through. When Radhika continued forward without paying much attention, Krishna exclaimed that he had been appointed by the King of that state to collect taxes. Hence Radhika and her friends could only pass after paying their taxes. He added, “Every day, You carelessly stride through here carrying a host of valuable items, and You never pay tax. Stop! Pay the tax and then You may pass”. 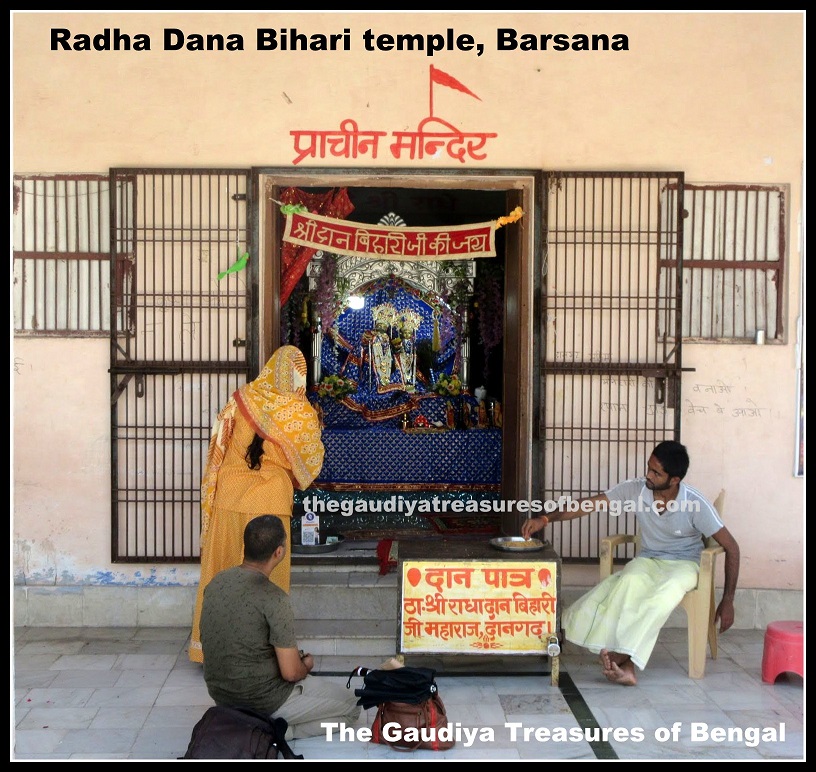 Vishaka, Radha’s friend, then confronted Krishna speaking in a stern voice. She said, “This is Radhika’s kingdom as she is Vrishabhanu-Nandini. Radhika is Vrindavanesvari.” She questioned how Krishna had become the tax collector without obtaining her permission. Krishna has surely committed a grave offense, she concluded. Krishna replied that Kandarpa deva (Cupid) was the king of the place and it is he who has appointed Him as the tax collector. Krishna sarcastically threatened to arrest Radha and her friends if they disobeyed Him. Vishaka replied that Kandarpa (Cupid) was helpless before Vraindavanesvari Sri Radha and his pride had been shattered by her side-long glances. Speaking thus, the sakhis moved forward. Se4eing this Krishna blocked the narrow passage of Sankari Khor to stop them on their way. After a brief exchange, Radha and Krishna enjoyed various amorous pastimes in a solitary grove. All present were filled with bliss.

This temple is situated on top of the peak known as Dana Garh, in Barsana. It is situated to the west of Sankari Khor. Dana Garh is located about 50 kilometers North-west of Mathura Railway station.