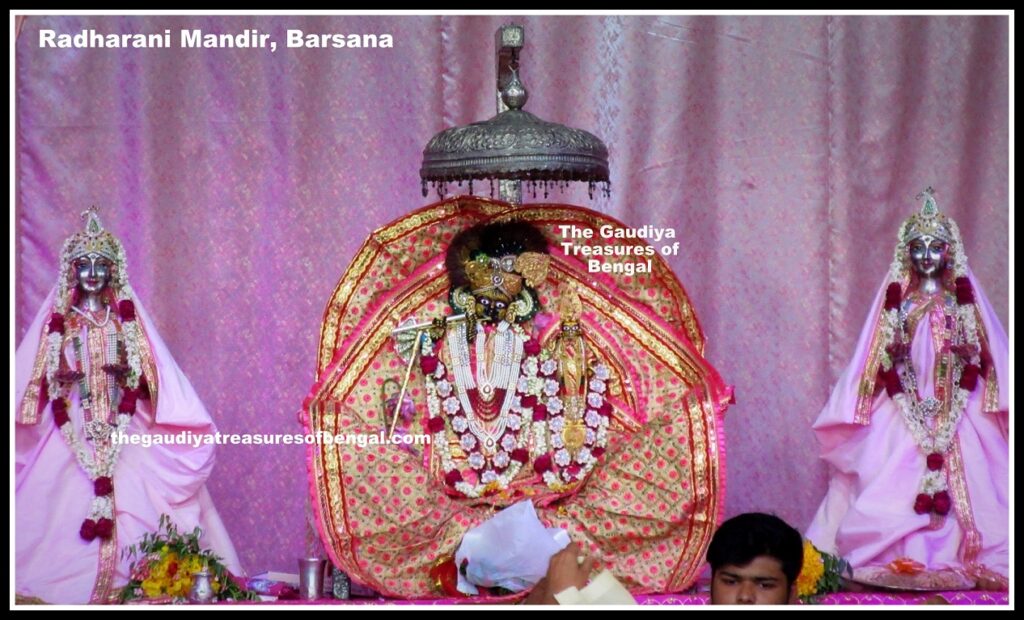 Sriji temple situated atop Bhangarh at Barsana comes across as a medieval palace characterized by tall walls, arches, pillars, and red sandstones. It is embellished with intricate hand carvings, domes, balconies, and exquisite paintings of Radha Krishna’s pastimes on its inner walls and ceilings. This present temple is said to have been built by King Veer Singh in the year 1675 AD. One needs to climb a flight of about 200 stairs to reach the entrance of the main temple where the enchanting deities of Radha and Krishna (Sri Ladli Lala) are worshiped with love and affection. 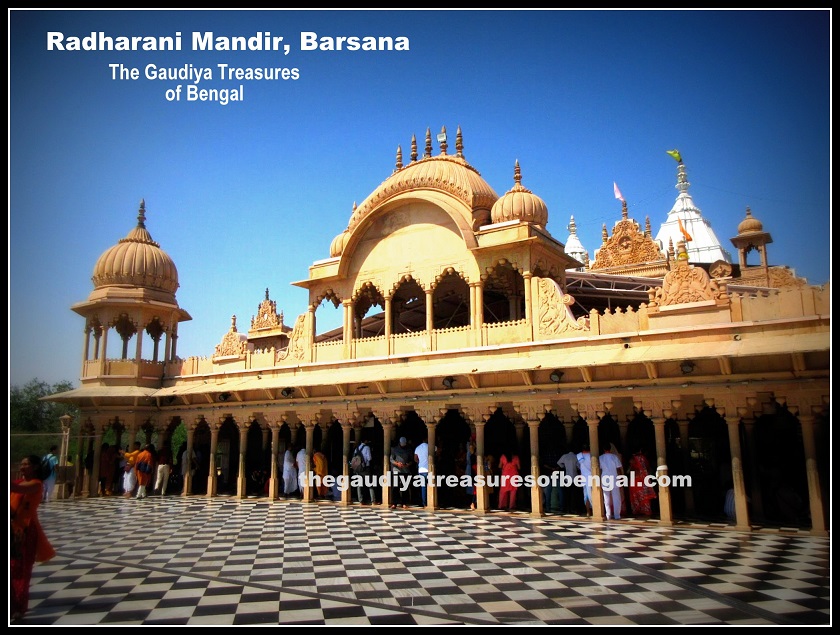 These deities are said to have been originally established at Barsana 5000 years ago by King Vajranabh, the great-grandson of Lord Krishna. The deities, however, were lost in course of time and were later recovered by Narayana Bhatta Goswami, a devotee in the line of Gadadhara Pandita. Narayana Bhatta Goswami, also famous as Vrajacharya, had discovered several lost sites of Vraja Mandala and even established the standard path of Vraja Mandala parikrama as had been walked by Chaitanya Mahaprabhu.

Once Madhumangala, who was very fond of eating Laddus, had shared with Krishna that he and the other cowherd boys were feeling very hungry. He appealed that Krishna should feed them sumptuously. Krishna then started playing upon His flute. Soon, numerous baskets containing Laddus started arriving. Krishna’s friends became very happy and ate to their necks. But the Laddus kept being served and the cowherds could not eat anymore. So they started throwing the Laddus towards each other and enjoyed themselves. This pastime is commemorated to this day at Barsana where the Laddu festival is held every year in the month of Phalguna (March-April) on the auspicious occasion of Shukla Ashtami. The pastime is commonly referred to as Madhumangala’s Laddu festival.

Lathmar Holi is a festival that is celebrated in the twin towns of Nandgaon and Barsana celebrating the ancient pastime where Krishna and His cowherd friends desired to spray colors on Radha and her friends. But as soon as Krishna and His friends entered Barsana they were greeted with sticks (lathi). Subsequently, the cowherd boys were driven out by the girls of Barsana. 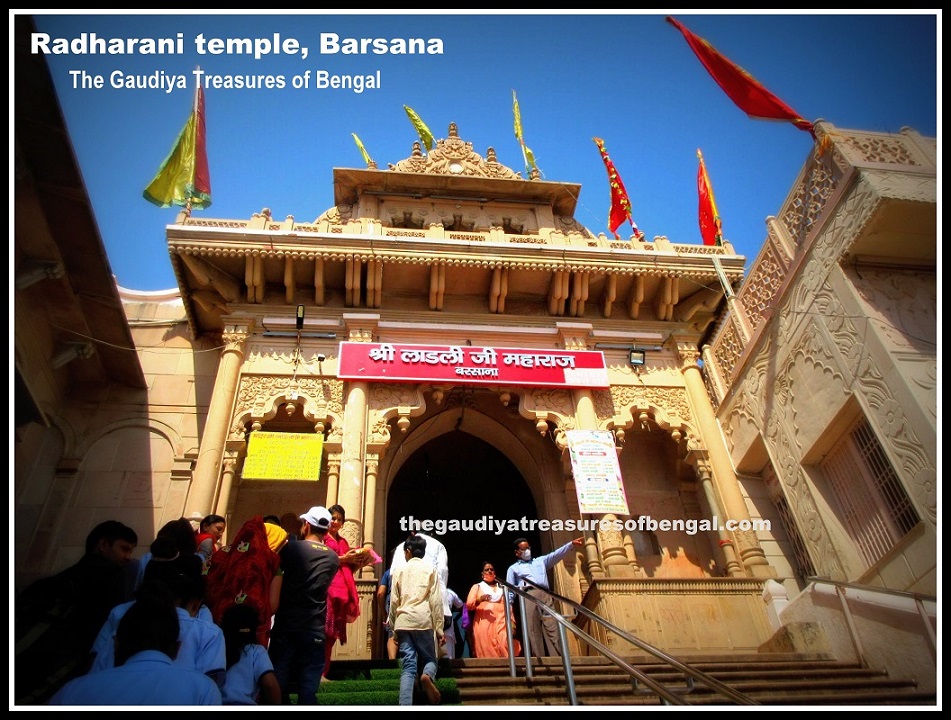 Following the same trend, every year on the occasion of Holi, the men of Nandagaon who are treated as sons-in-law of Barsana visit Barsana and are greeted by the women with colors and sticks (aka lathi). The men try to protect themselves from the beatings by holding a small shield upon their heads. The celebration is enacted in perfect good humor by both the men of Nandgaon and the women of Barsana. The celebration of Lathmar Holi takes place in the month of Phalguna (March-April) every year here at Barsana. 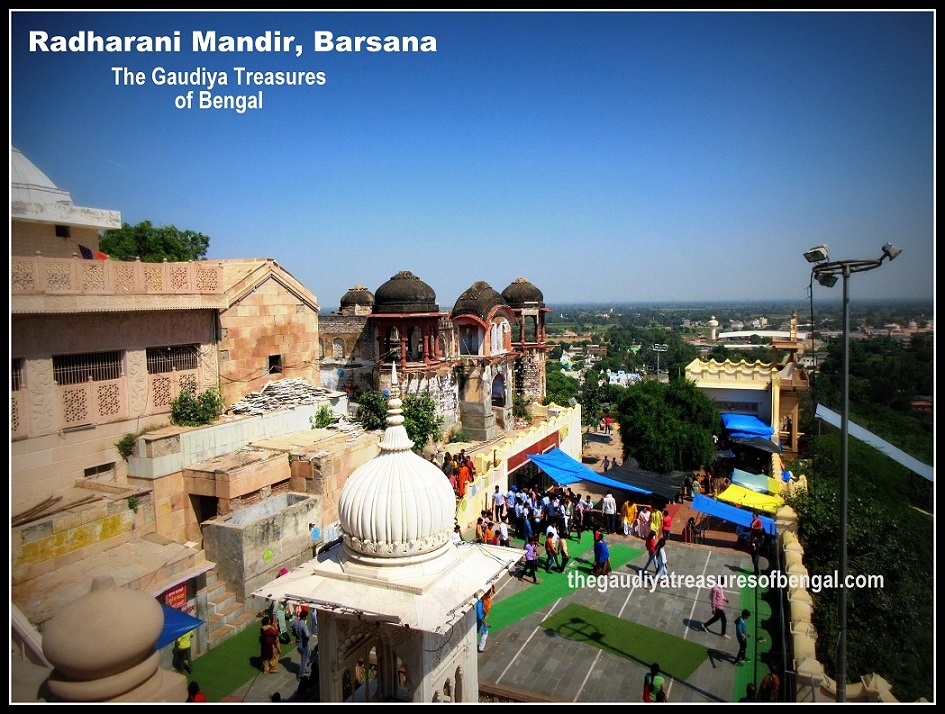 Barsana is well connected via roadways and is situated about 50 Kilometers from Mathura. Reaching the village of Barsana, one needs to climb a flight of about 200 steps to reach the entrance of Barsana Radha Rani Mandir (Sriji Mandir).