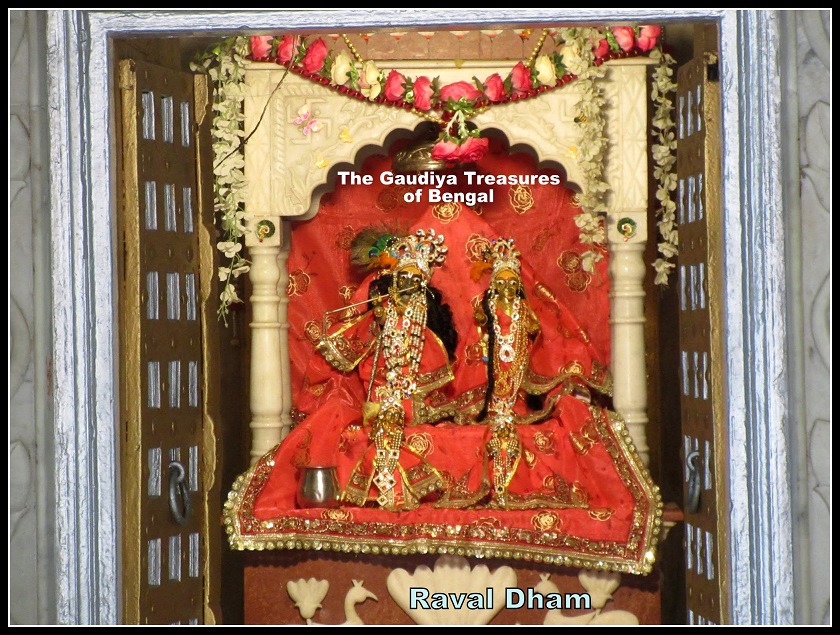 Divine appearance of Radharani at Raval

Srimati Radharani appeared on the eighth day of the bright moon in the month of Bhadra (August-September). She is the eternal daughter of King Vrishabhanu and mother Kirtida. She was born here at Raval and dwelled at this place till the time Krishna lived in Gokul. When Nanda Maharaja shifted his family from Gokul to Nandgaon, Vrishabhanu Maharaja also shifted from Raval to Barsana. Nanda Maharaja and Vrishabhanu Maharaja were close friends. Srimati Radharani is also celebrated as Vrindavaneshwari or the queen of Vrindavan. There are a number of different stories portraying Srimati Radharani’s appearance in this material world. All of them are correct as Radharani had appeared in this world countless times in the course of different millennia. We shall try to recite each of these different stories in this article.

Radharani appears due to Brahma’s boon to Vindhya Parvata

Srila Rupa Goswami has penned this pastime in Lalita Madhava wherein Paurnamasi relates this story to Gargi, the daughter of Garga muni. Paurnamasi had understood this pastime by the mercy of Narada, her spiritual master. Vindhya Parvata once grew jealous of the Himalayas as the latter had Parvati (Gauri) as his daughter and Mahadeva as his son-in-law. Vindhya too desired a fortunate daughter, whose husband would be more eminent and one who could defeat even Mahadeva in battle. Accordingly, Vindhya Parvata underwent severe austerities, with the objective of pleasing Lord Brahma. Brahma became satisfied and granted Vindhya his wishes. However, Brahma then began considering who could defeat Mahadeva in battle. He became worried. He then realized that Lord Krishna would soon manifest His pastimes in the material world and only He could overpower Mahadeva in warfare. Brahma thought that in order to have Krishna as his son-in-law, Vindhya was required to have Radharani, Krishna’s eternal consort, as his daughter. But again, Kirtida was the eternal mother of Radharani. So how was it feasible for Vindhya to have Radha as his daughter? 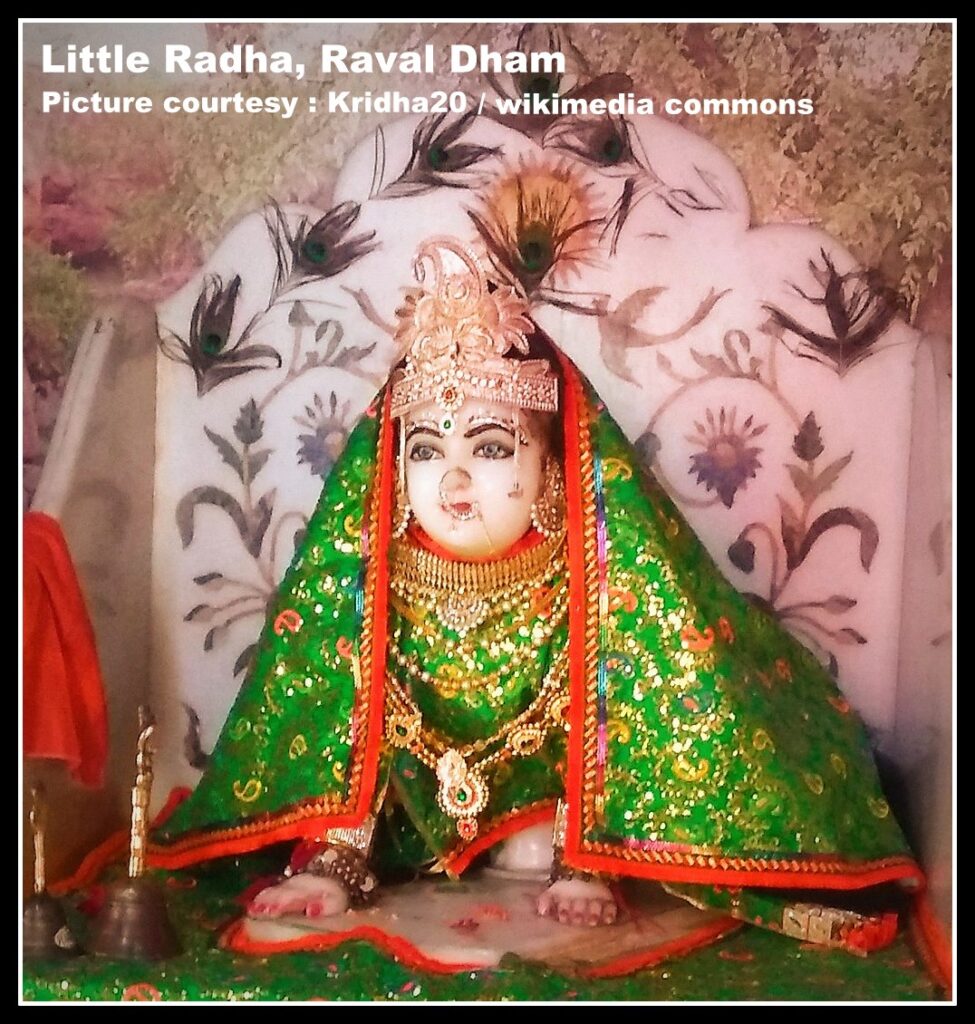 Becoming anxious, Brahma began praying to Radharani. When Radharani was pleased with Brahma, she agreed to appear as Vindhya’s daughter. Then Yogamaya devi arranged so that the two girls Radharani and Chandravali, who by then had already appeared in the wombs of the wives of Vrishabhanu and his brother Chandrabhanu respectively, were transferred to the womb of Vindhya’s wife.

Meanwhile, Kansa ordered Putana to kill young boys and kidnap all young girls. It was because Kansa had learned that the child destined to kill him was born recently. Noticing Radharani and Chandravali, Putana wanted to steal them. She picked up the girls and flew away. Witnessing this Vindhya summoned his brahmanas to chant auspicious mantras to kill the demon. As a result, the escaping Putana grew weaker and weaker. Eventually, she could not hold onto the baby girls.

Putana tossed Chandravalli onto a river that flowed to the kingdom of Vidarbha. Bhismaka, King of Vidarbha, looked after the girl till she was five years old. Later Jambavan recovered the girl and returned her to Vindhya. Putana threw Radharani while she was flying over Vraja. Paurnamasi rescued the baby and handed her to Mukhara, informing her that Radha was the daughter of Vrishabhanu, her son-in-law. Since then Radha became renowned as the daughter of King Vrishabhanu.

Katyayani devi blesses King Vrishabhanu to have Radharani as his daughter

Once Surya deva (sun god) worshiped Sri Hari with the wish to have the queen of Goloka as his daughter. Being pleased, the Lord consented to fulfill his desires. Accordingly, Suryadeva incarnated as Vrishabhanu, the son of Mahabhanu, King of Raval. In due course of time, Vrishabhanu inherited the throne from his father. He married Kirtida, the daughter of Bindu and Mukhara. Bindu was a rich cowherd living in Vraja. But even after several years of their marriage, Vrishabhanu and Kirtida devi, could not conceive a child. They performed several yajnas, worships, donated to charity, performed extensive pilgrimages, etc but nothing worked. Finally, on the advice of Kirtida devi, Vrishabhanu Maharaja began worshiping Katyayani devi. He worshiped Katyayani devi by executing severe austerities on the bank of the river Yamuna. One day, while he was absorbed in meditation, King Vrishabhanu heard a voice that inspired him to take shelter of Harinama (the holy name of Sri Hari). The divine voice impressed upon him the all-purifying nature of the holy name. King Vrishabhanu then sought advice from Kratu muni whose hermitage was nearby. Kratu muni described the glories of Harinama to King Vrishabhanu and instructed him to regularly chant the Hare Krishna Mahamantra – Hare Krishna Hare Krishna Krishna Krishna Hare Hare, Hare Rama Hare Rama Rama Rama Hare Hare. 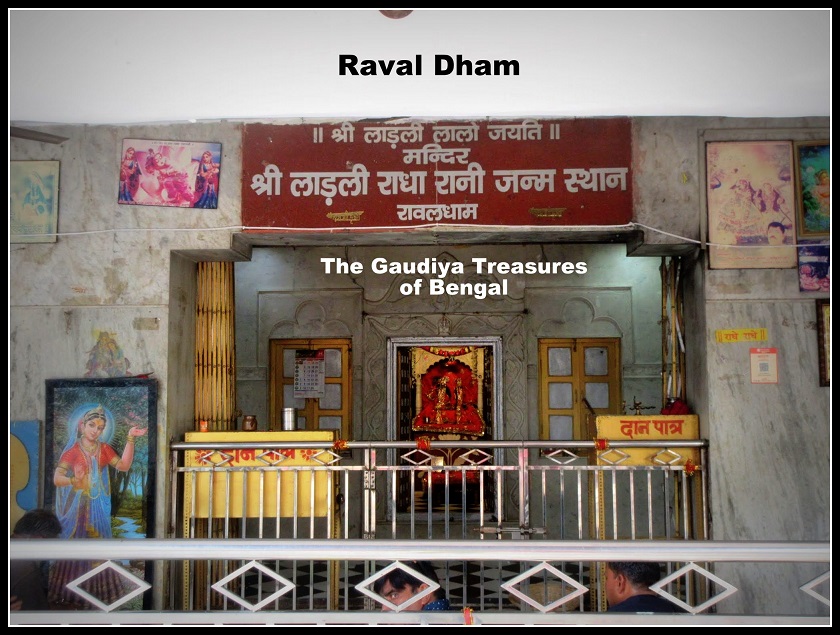 Kratu muni further explained that irrespective of whether one worships Lord Shiva, Vishnu, the sun god, or Ganesha, one must take shelter in the holy name. One whose ears are untouched by the holy names of Sri Hari is the most unfortunate. Kratu muni exclaimed that the chanting of Harinama has been glorified by Sri Vyasadeva. Brahma had also taught the same to Angira muni. Heeding the instructions of the sage, King Vrishabhanu accepted the mantra and began chanting it with a devoted heart. Soon goddess Katyayani appeared before Vrishabhanu Maharaja and gifted him with an effulgent oval-shaped box. In course of time, Vrishabhanu Maharaja and Kirtida devi’s wishes were fulfilled. The most beautiful and golden-complexioned Radharani appeared as their daughter on the auspicious day of Radhastami.

Once while King Vrishabhanu was meditating upon the Supreme Lord in the waters of Yamuna, a thousand-petalled lotus drifted toward him. When he opened his eyes he witnessed a gorgeous molten-colored girl playing in the flower. He was very happy to accept the girl and brought her to his palace. In this way, Radharani united with her eternal parents, Vrishabhanu Maharaja and Kirtida devi.

Radharani opens her eyes for the first time

Shortly after Radharani’s appearance, Paurnamasi visited Raval and disclosed to Vrishabhanu Maharaja and Kirtida devi about the exalted position of their daughter. She informed them that Radha was none other than the eternal consort of the Supreme Lord. Just as the Supreme Lord appears in this world out of His own sweet will, similarly their daughter was a divine personality who had appeared out of her own sweet will. She is the origin of goddess Lakshmi and is worshiped by the likes of Brahma, Shiva, Indra, Varuna, and other demigods. 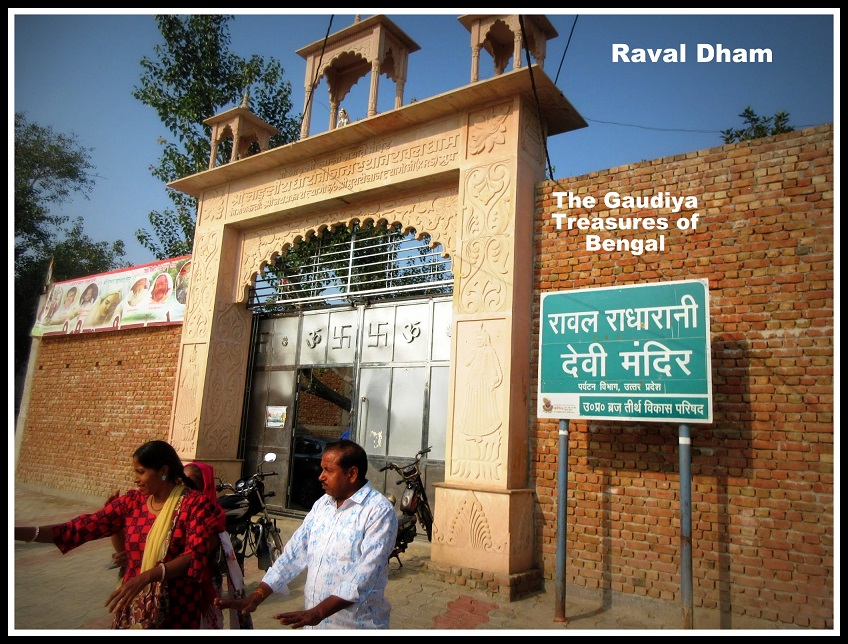 Radharani’s effulgence and her incomparable beauty melted everyone’s heart. But the girl had not opened her eyes yet. This made her parents a bit morose as they believed their daughter was born blind. Soon Nanda Maharaja and Yashoda visited Raval along with little Krishna. While Yashoda and Kirtida were busy discussing the newly born Radha and her condition of blindness, Krishna climbed down from her mother’s lap. He quietly entered the room where Radha was sleeping. As soon as He climbed onto her bed and touched her eyes, she opened her eyes to drink the nectar of Krishna’s beauty. Soon the news spread and everyone was elated to learn that Radharani could see.

Before manifesting His pastimes in this material world, Krishna had requested Radharani to accompany Him. But Golokeshwari Radharani was unwilling to come to the material world. It is because she did not want to look at other people’s faces and her only desire was to see Krishna. Krishna assured her that she would always be able to see Him. She demanded that the first person she would see in this material world must be Krishna. Krishna agreed. Accordingly, she opened her eyes only when her beloved Mukunda was before her.

Raval is situated about 9 Kilometers from Mathura. Reaching Raval one needs to travel about a Kilometer inside from the main road to reach the entrance of the Ladli-Lala temple. The place is about 3 Kilometers away from the Jamuna paar police station.

There is no end to thrill and ecstasy in Vraja today

Donning new clothes, the Gopis rushed (to the house of Kirtida devi)

They were no longer able to hold onto their sober spirit

Looking incredible and resting upon the shoulders of their husbands, they reached the center of the house.

Subhanu, Chandrabhanu, and the other brothers of Vrishabhanu Maharaja were no longer able to restrain themselves.

They danced with the other cowherds who surrounded them.

Songs imbued in loving devotional sentiments were being complimented by soulful music from innumerable musical instruments.

People sang and danced in euphoria. Their clothes swung from one end of their body to the other.

In jest, people spilled ghee, curd, milk, and water on top of each other’s heads.

Narahari is amazed to witness this wonderful celebration of Radharani’s appearance.