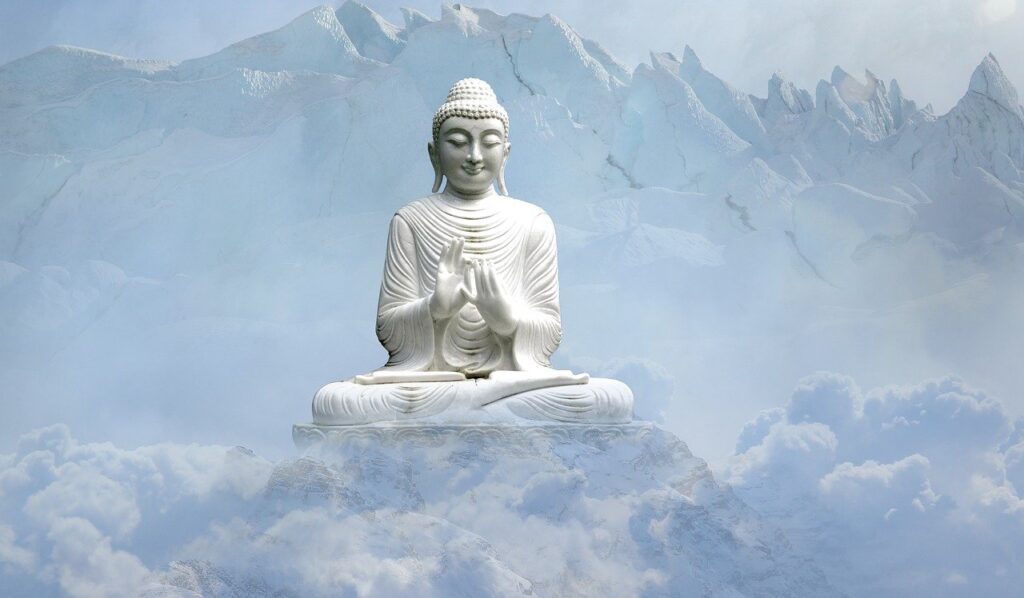 namo buddhaya suddhaya daitya-danava-mohine
mleccha-praya-kshatra-hantre namas te kalki-rupine
(Srimad-Bhagavatam 10.40.22)
–
Obeisances to Your form as the faultless Lord Gautama Buddha, who will bewilder the miscreants by composing anti Vedic scriptures. I also offer obeisances to Lord Kalki, the annihilator of the barbarians posing as kings.

Gautama Buddha or Siddhartha was born in India six hundred years before the birth of Jesus Christ. He is regarded as the ninth incarnation of Lord Vishnu. His father Suddhodana was the ruler of the Indian province of Gaya. One night Maya, Suddhodana‘s wife, had a vivid dream where she was transported to a golden house in the Himalayas. Thereafter she was cleaned and laid on a silken bed. A white elephant touched her right side with a lotus, after which a baby entered her womb. On waking up, Maya narrated the entire incident to Suddhodana. The King then summoned one of his advisers who was an expert in astrology. He predicted that soon the queen would give birth to a son who would become a saintly king or a famous religious teacher. The prediction came to pass. The queen gave birth to a beautiful son after nine months, who possessed all the signs of a great personality. His parents named Him Siddhartha Gautama. The queen died shortly after giving birth to Siddhartha.

King Suddhodana was afraid that his son might renounce his kingdom and live the life of an ascetic. Hence he ordered that his son should never leave the palace grounds, and should always be escorted by security guards. Siddhartha had everything at His disposal – costly clothes, jewelry, finest foods, etc. He was entertained by the country’s finest musicians and dancers. Siddhartha was married to a lady who was more beautiful than heavenly damsels. Yet Siddhartha was not content and He longed to explore beyond the palace walls.

See also  Vishnu or Shiva - Who is Supreme? | Differences between Vishnu and Shiva

Siddhartha escapes from the Royal Palace

One day, Siddhartha indeed managed to escape His guards to reach beyond the palace gates. Seated on a chariot, He saw a wrinkled old man with gray hair, walking with a stick. Then He witnessed a procession of people weeping over and carrying a dead body. Not sure of what to make of these, Siddhartha stopped by and enquired from a monk. The monk answered that anyone who takes birth in this world must undergo old age, disease, and death. Siddhartha returned to the palace and repeatedly asked Himself why there must be any suffering. He vowed to solve the eternal problems of life. On the midnight of Pushya-nakshatra-tithi, Siddhartha sneaked silently out of the palace gates and escaped to the forest. 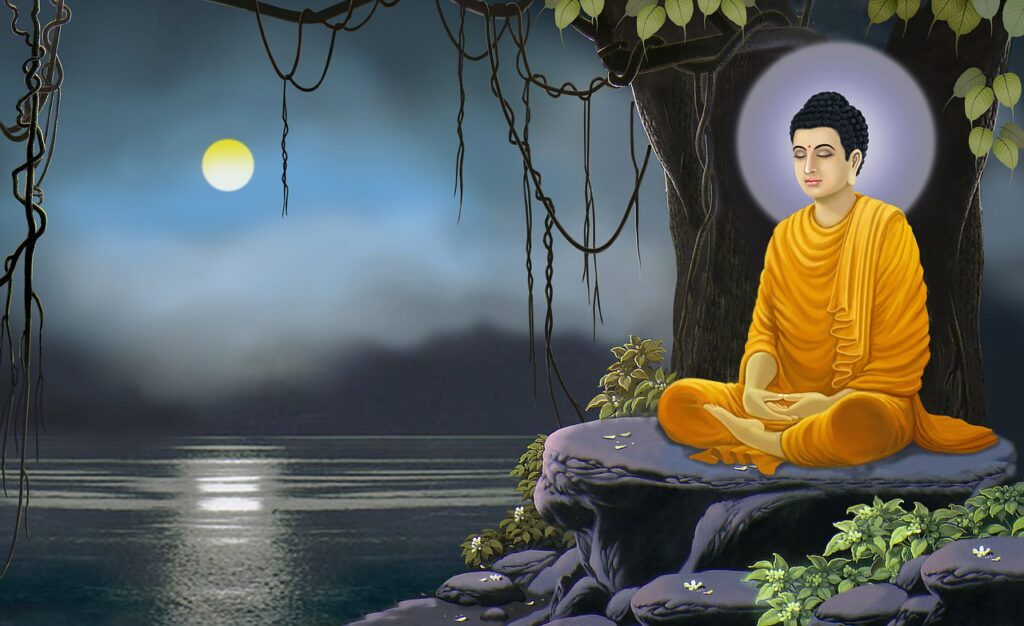 Siddhartha began leading the life of an ascetic, voluntarily accepting discomfort. He had never felt content with the riches and luxuries of the royal palace. Now He did not care for the food He ate or the clothes He wore. But even the life of severe austerity did not interest Him. Therefore, He chose the ‘middle path’. Siddhartha was moderate in everything, neither eating nor sleeping too much or too little.

At the time of renouncing the world, Siddhartha handed over all the jewels he was wearing to his charioteer Chandoga. He even destroyed and threw away the crest on his forehead and wore saffron clothes. The three respective locations where Siddhartha separated from Chandoga, destroyed his crest and put on saffron clothes have been established as chaitya (shrine). 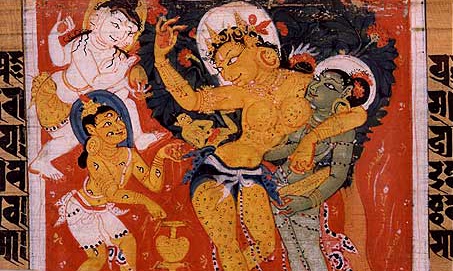 Chandoga then returned to the capital, handing all the jewels of Siddhartha to King Suddhodana, and described the whole incident to him. Upon hearing the details of Siddhartha’s renunciation, overwhelmed by sorrow, his father began crying. Seeing no possibility of Siddhartha’s return, the grief-stricken Suddhodana threw all the extremely precious jewels (abharana) of Siddhartha into a pond. Since that time the pond has been known by the name of ‘Abharana’.

When Siddhartha’s wife awoke in the morning and heard the news of the renunciation of her husband, she cut off all her beautiful hair out of grief and cast away all the jewels from her body. She fell to the ground like a person harshly wounded by a weapon and began crying out that she had lost all the happiness of her life.

After renouncing the world, Siddhartha initially moved to Vaishali city where He observed the vow of celibacy and took initiation from Arariakalama Upadhyaya. Not finding the desired happiness, He proceeded to the city of Magadha. Bimbisara, the king of Magadha, expressed his desire to donate his entire kingdom to Siddhartha and become His follower. Siddhartha rejected his offer for material riches as He considered them poisonous. Thereafter, Siddhartha studied theology under Upadhayaya Rudraka. He subsequently left for Gaya and practiced penance on the bank of Niranjana river, near Uruvilva village. One day sitting under a giant Bo tree, Siddhartha attained enlightenment. He ascertained the cause of the world’s sorrows and the method of its prevention. His attention became unwavering and He attained peace of mind. He became free from all worldly desires, lust, greed, and anger. From that day on people called him Buddha (the enlightened one). 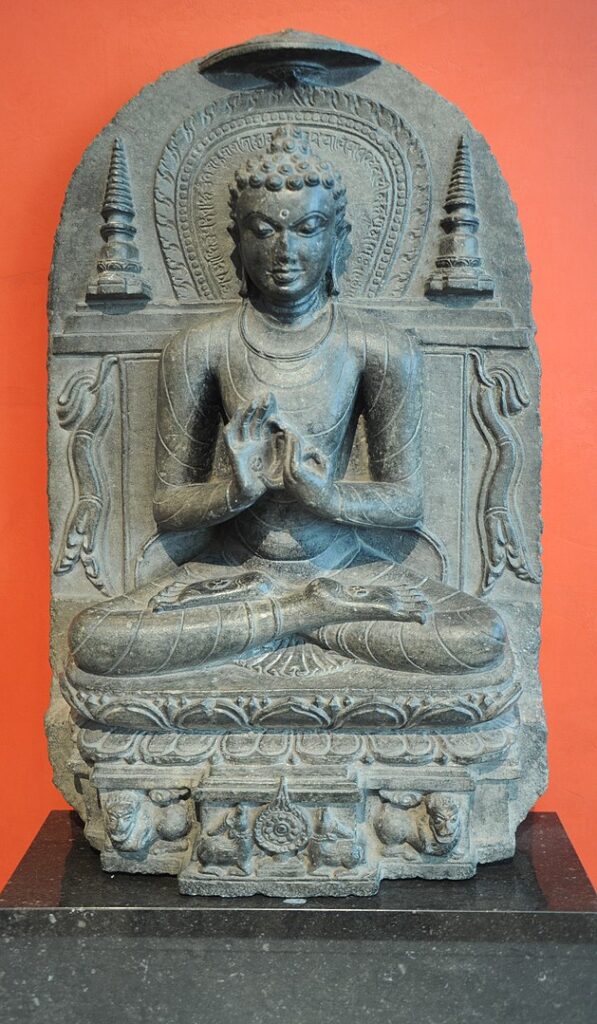 As was foretold, Lord Buddha became famous as a religious teacher and amassed thousands of disciples. By his influence thousands of Kings accepted Buddhism. Buddha taught the principles of compassion and non-violence. The people of the time were largely atheistic and they misused the Vedas for their selfish purposes. In the name of the Vedas, they installed huge slaughterhouses and butchered thousands of innocent animals daily. Therefore, Lord Buddha outwardly rejected the Vedas and emphasized a strictly vegetarian diet. In this way, He protected the poor animals and, at the same time, deceived the atheists into following Him and His philosophy.

tatah kalau sampravritte sammohaya sura-dvisham
buddho namnanjana-sutah kikateshu bhavishyati
(Srimad-Bhagavatam 1.3.24)
–
Then, at the beginning of Kali-yuga, the Supreme Lord will appear as Lord Buddha, the son of Anjana, in the province of Gaya, just to delude those who are envious of the theists.