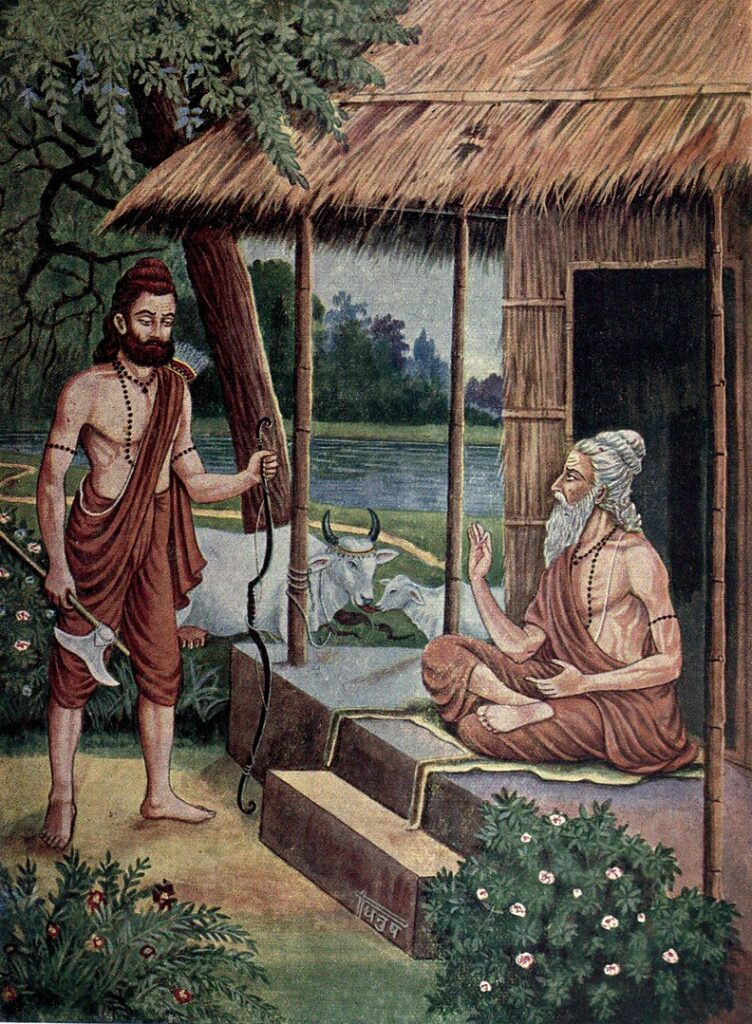 Parashurama, the warrior, is the sixth incarnation of Lord Vishnu. He appeared as the son of Jamadagni and Renuka. He was a descendant in the line of sage Bhrigu. Parashurama had annihilated the royals who, becoming excessively proud, turned irreligious and ignored the laws enacted by the brahmanas (priests). Sukadeva Goswami had recited the pastimes of Parashurama to Maharaja Parikshit in the ninth canto of Srimad Bhagavatam. Below is a brief synopsis of the same.

Kartaviryarjuna, the king of the Haihayas, had received one thousand arms by performing severe austerities and pleasing Lord Dattatreya, a plenary expansion of Lord Narayana. Not only did he become undefeatable in war, but had also acquired immense beauty, influence, strength, mystic powers, yogic prowess, etc. He had once playfully stopped the flow of river Narmada with his thousand hands. This caused the city of Ravana, the king of asuras, to become inundated with water. When Ravana attempted to insult Kartaviryarjuna in front of his women, Kartaviryarjuna easily captured Ravana and held him captive in the city of Mahishmati, and then released him neglectfully. Such was the prowess of Kartaviryarjuna. 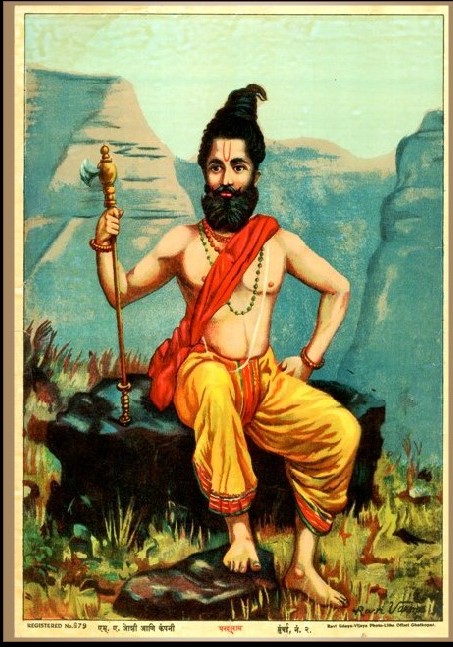 When Jamadagni heard what had happened and how Parashurama had slain the King, he became upset. He expressed that a brahmana should cultivate the quality of forgiveness and that the killing of the king was a sin. He asked Parashurama to undertake pilgrimage to holy places and atone for His sins. Lord Parashurama obliged and traveled to holy places for one full year before returning to His father.

Parashurama is ordered to kill His mother and brothers

One day Renuka, wife of Jamadagni, had gone to bring water from the Ganges. But when Renuka saw Citraratha, the King of the Gandharvas, sporting with celestial girls over there, she became attracted to him. As she stood there gazing, the time for fire sacrifice expired. Realizing her mistake and fearing a curse from her husband, Renuka quickly fetched the water and returned to the ashrama. But Jamadagni, who was a powerful ascetic, could perceive what had happened. He ordered his sons to immediately kill his wife for her adulterous thoughts. When his sons refused, he ordered Parashurama, his youngest son, to kill his brothers and Renuka. Parashurama was aware of His father’s ascetic prowess. Hence He immediately obliged and killed His mother and brothers. Jamadagni was very happy with his son and requested Him to ask for a boon. Parashurama then asked His father to revive His mother and brothers so that they might live again. Also, they should not remember that they had been killed by Parashurama. Thus, His brothers and mother were revived, as if awakened from a sound sleep.

Parashurama avenges the slaughter of Jamadagni

The sons of Kartaviryarjuna looked out for an opportunity to avenge their father’s death. Once when Parashurama and His brothers were all away, the sons of Kartaviryarjuna approached Jamadagni’s residence to seek revenge. Despite Renuka’s pleas, Kartaviryarjuna’s sons cut off Jamadagni’s head and took it away. As Renuka cried, ‘Rama, my dear son Rama!’, Parashurama returned and found His father dead. Parashurama was blinded with rage and grief. Upon entrusting the dead body of His father to His brothers, He set out for Mahishmati to avenge the killing of His father. Parashurama killed thousands and amassed a mountain of heads, severed from the bodies of the sons of Kartaviryarjuna. He created a ghastly river that struck fear in the hearts of those kings who disregarded the Brahmanical culture. Parashurama did not stop after killing the royals of Mahishmati but wanted to rid the earth of all Kings. He rid Kshatriyas of the face of the earth twenty-one times. He ended up creating nine lakes, filled with blood. 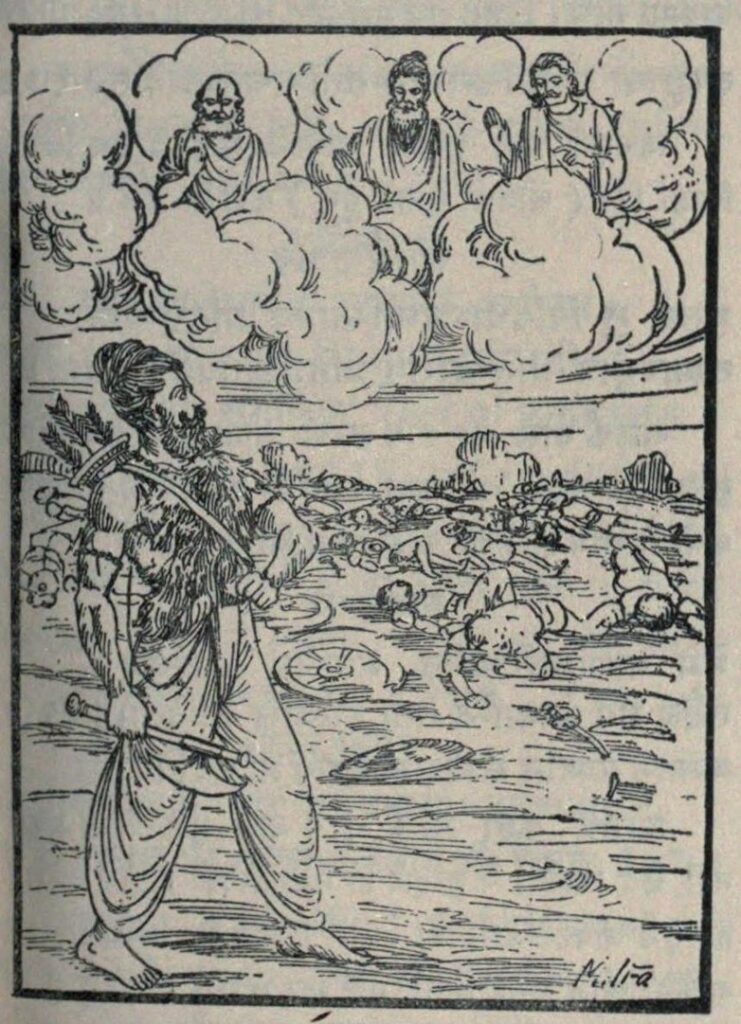 When Lord Rama destroyed the pride of Parashurama

Ramayana describes the following pastime where Lord Rama was once confronted by Parashurama. This happened at a time when Rama was returning with His wife Sita to Ayodhya. After spending a few days at Mithila, King Dasaratha proceeded toward Ayodhya along with his sons and daughters-in-law. A large army accompanied the procession. Suddenly a fierce tempest blew up, the earth shook while the sky was enveloped in complete darkness. These were the symptoms of impending grave danger. Suddenly from the darkness appeared the sage Parashurama. He was dressed in tiger skins and had matted locks at the crown of his head. All immediately recognized him. Parashurama was the empowered brahmin who had single-handedly annihilated millions of Kshatriyas being enraged at his father’s death at the hand of warriors. Parashurama was the fighter who had rid the world of its warriors’ twenty-one times. This time Parashurama challenged Lord Rama. He had heard of Rama breaking Shiva’s bow and had come to test His strength. Dasaratha and the other sages pleaded with him. Paying no attention to them, he informed Rama that he had another sacred bow in his possession. This bow belonged to Lord Vishnu and was more powerful than the previous one as Vishnu is always superior to Shiva. He challenged Rama to string that bow and draw it to its full length. If Rama was successful, he would challenge Him to a duel. 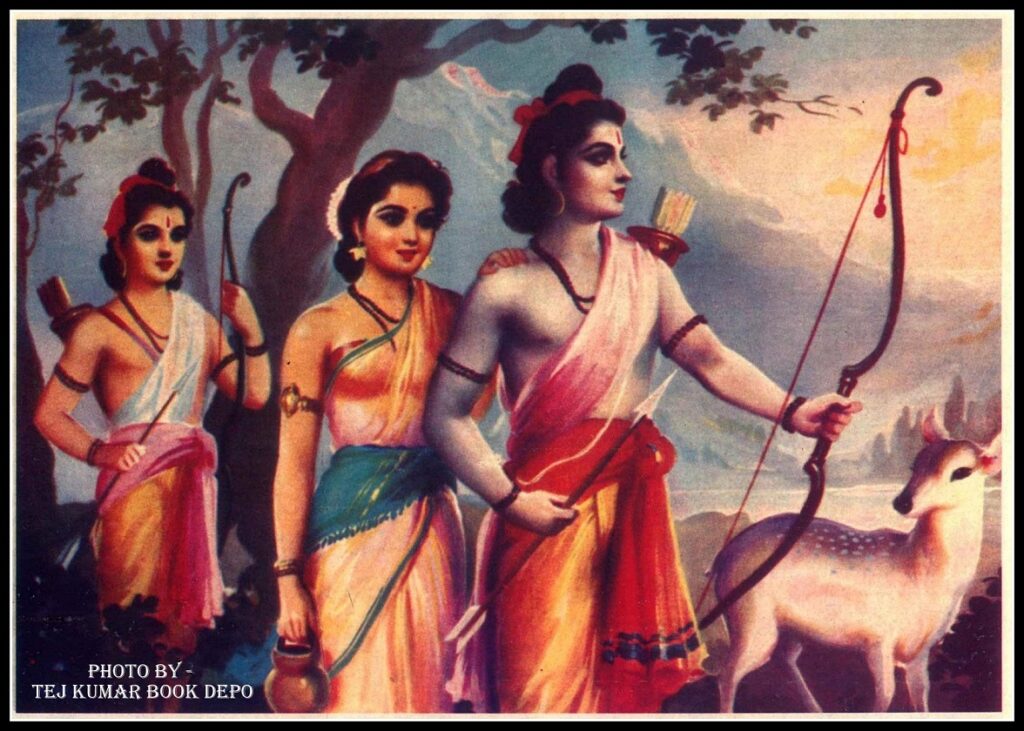 Lord Rama paid His respects unto the sage. He stepped forward and effortlessly strung the bow with a blazing arrow. Looking angrily at Parashurama, He asked, “Where shall I release this deadly shaft, O sage? As you are My superior I dare not aim it at you”. Fearing that the arrow might destroy the heavens, the demigods trembled with fear. Parashurama came back to his senses and realizing that Rama was none other than Vishnu, spoke apologetically. He recalled how Vishnu had informed him long back that He would come to take back the divine energy He had given to the sage. Parashurama praised Lord Rama and requested Him to aim the arrow at his pride and his desires for heavenly pleasures so that he becomes fit to serve Rama eternally. Bowing before Rama, the sage then vanished.