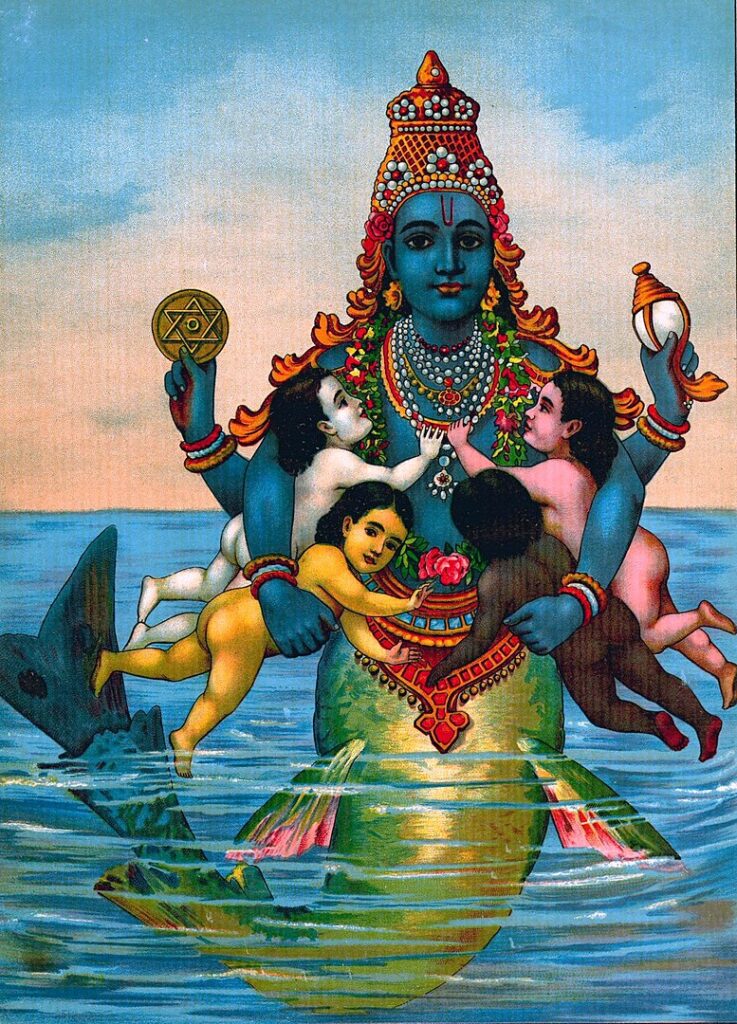 Matsya Avatar or the fish incarnation is the first of the ten avatars of Vishnu, the Supreme Lord. The eighth canto of Srimad Bhagavatam describes the pastimes of ‘Matsya avatar’ in great detail. In addition, Matsya Purana also glorifies His wonderful pastimes. Five thousand years ago, Parikshit Maharaj inquired about the Matsya avatar from Srila Sukadeva Goswami. Sri Sukadeva Goswami explained how the Supreme Lord incarnates in this world millennium after millennium in order to protect the cows, brahmanas, religious principles, spiritual knowledge, etc. Although the Supreme Lord appears sometimes as a human being and sometimes as a lower animal, He nonetheless always stays transcendental. Sukadeva Goswami glorified Matsya avatar and described how in the previous millennium (Svayambhuva Manvantara), while Lord Brahma was asleep, the water of devastation flooded the three worlds, only leaving Brahmaloka and a few other higher planets untouched. As Brahma took rest, the demon Hayagriva tried to steal the Vedic knowledge that emanated from Brahma’s mouth. The Supreme Lord Vishnu, then assumed the form of ‘Matsya avatar’ (fish incarnation), as everything was inundated by water, and rescued the Vedas by killing the demon.

Sukadeva Goswami further described how in the Chakshusha Manvantara, Matsya Avatar had appeared once more to bestow His favor upon King Satyavrata, the king of Dravidadesha and a great devotee. One day while King Satyavrata was performing his daily rituals by offering water on the bank of river Kritamala, a small fish appeared in his palms. King Satyavrata hence tossed the water in his palm, along with the fish back into the river. 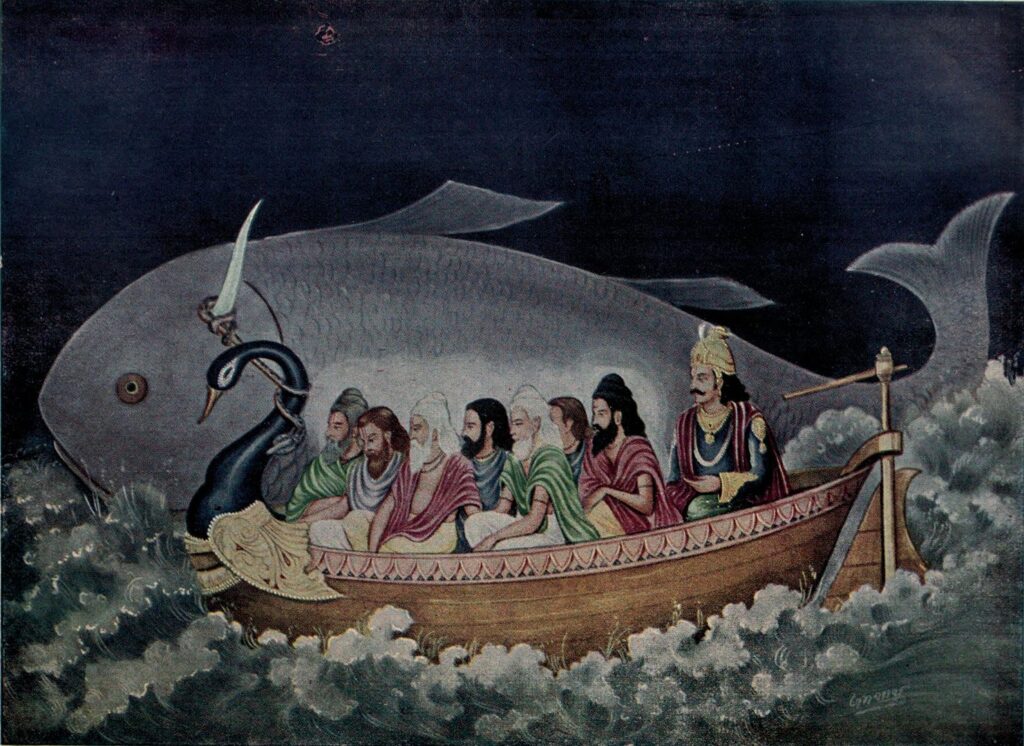 The fish prayed that it was in danger from the big aquatics that lived in the river and hence sought the King’s protection. Not knowing that the fish was none other than the Supreme Lord, the king decided to protect it. King Satyavrata placed the fish in a jug of water and carried it to his residence. But the fish began to grow and within one night, it became too large to be kept in that jug. The fish begged once more to be provided with a larger water reservoir. Subsequently, the King put the fish in a large well, but in no time, the fish expanded to three cubits in length, and could not move about freely in the well. The King thereupon placed the fish in a lake, but once again, it assumed a gigantic form and became too enormous for the lake. The fish beseeched again for a larger water reservoir. The King then ordered the fish to be placed in the largest lake. But when that too proved to be insufficient, the fish was moved to the ocean. While being tossed into the ocean, the fish asserted that the ocean housed big and powerful aquatics that might kill it. Hearing these sweet words, a bewildered Satyavrata asked, ‘Who are you, sir? You have expanded Yourself for hundreds of miles in a single day. I have never before seen or heard about an aquatic like You. Therefore, You must be the Supreme Lord Sri Hari who has now appeared to bestow His causeless mercy upon the living beings.’ The King glorified the Lord and requested Him to reveal the reason for His appearance. 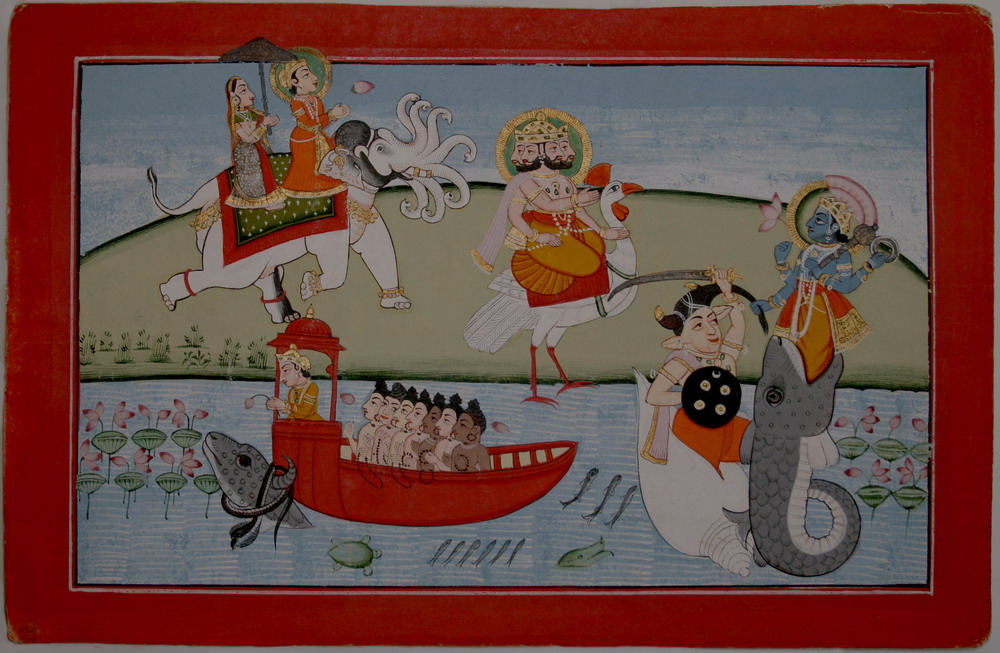 Sri Matsya Avatar then disclosed that there would be heavy rains for seven consecutive days following which the three worlds – Bhurloka (earth), Bhuvarloka (celestial planets), and Svargaloka (heaven) would be completely inundated in water. At that time the Lord shall dispatch a large boat that would appear before King Satyabrata. The king should collect all the various types of herbs, seeds, animals, etc, and load them onto the boat. Accompanied by the seven celestial sages, whose radiance shall illuminate and guide the boat, the King shall be able to sail upon the water of devastation without any worry. Sri Matsya avatar further instructed the King that he should tie the boat to His horns with Vasuki, the great serpent. Lord Matsya shall then guide the vessel within the water of inundation until Brahma wakes up once again, and the water subsides. Having spoken thus, Sri Matsya disappeared. 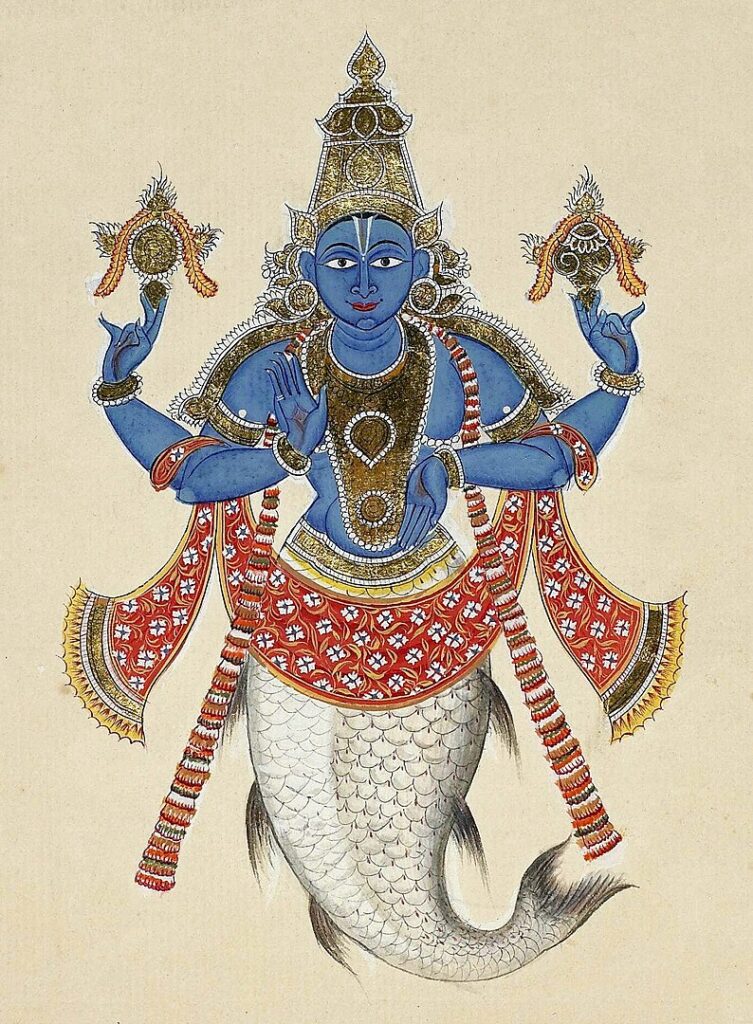 As foretold by the Lord, gigantic clouds streaming incessant rains swelled up the ocean more and more. The ocean gradually began flooding the land. King Satyavrata saw a boat approaching him. Wasting no time, the King collected all the different kinds of herbs, seeds, animals and boarded the boat along with the saintly brahmanas. As the King meditated upon the Supreme Lord, Sri Matsya avatar who had expanded to eight million miles in length appeared before the boat. The King anchored the boat to the fish’s horn with serpent Vasuki, who acted as a rope. The King then glorified the Lord and offered prayers unto Him. Being satisfied with the King’s prayers, the Supreme Lord enlightened the King with divine knowledge. By the mercy of Matsya avatar, the king became fully enlightened and took birth as Vaivasvata Manu in the present Kalpa.

avataram harer yo ’yam kirtayed anvaham narah
sankalpas tasya sidhyanti sa yati paramam gatim
(Srimad Bhagavatam 8.24.60)
–
One who daily narrates and chants this wonderful pastime of Matsya incarnation and King Satyavrata will certainly have all his ambitions fulfilled, and undoubtedly return to the spiritual world.