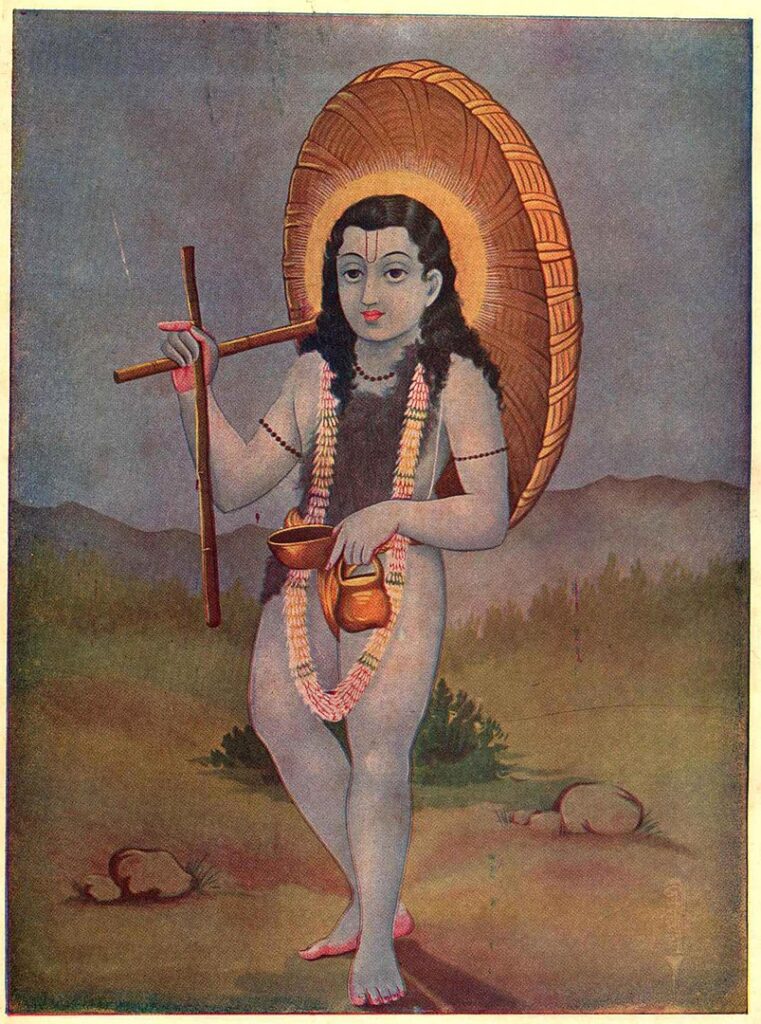 Vamana avatar, the dwarf incarnation of Lord Vishnu, appeared as the son of Aditi and sage Kahysapa. The Lord appeared in His blissful spiritual form. His four hands were adorned with a conch shell, club, lotus, and disc (Sudarshan chakra). His eyes were reddish like petals of a blooming lotus while He was dressed in yellow garments. His complexion was blackish and His face appeared beautiful. Vamana deva wore earrings resembling sharks, bangles on His wrists, armlets, a helmet on His head, a belt on His waist, a sacred thread, ankle bells, and His bosom was marked with Srivatsa. He wore a Kaustubha gem on His neck and a beautiful garland of fragrant flowers adorned His bosom. His effulgence dispersed the darkness of the house. Lord Vamana was born on auspicious Sravana dvadasi, the twelfth day of the bright fortnight in the month of Bhadra (August- September) when the sun was at the meridian. The Lord had appeared at the auspicious moment of ‘Abhijit’. The appearance day of Lord Vamana is also known as ‘Vijaya dvadasi’. The demigods and celestials showered flowers and played on their musical instruments celebrating the appearance of the Supreme Lord. Seeing their newborn child, Aditi and Kashyapa muni were struck with astonishment and were jubilant. The Supreme Lord had appeared in His original form with weapons in His hands. Then, in the presence of His parents, he transformed Himself and assumed the form of a ‘Vamana’, a dwarf.

Brihaspati offered a sacred thread to Lord Vamana, while the sun-god personally uttered the Gayatri mantra. Kashyapa muni offered Him a straw belt, while mother earth gave the Lord a deerskin. The demigod of moon, who is the king of forests, presented the Lord with a brahma-danda (rod of a celibate). Mother Aditi gifted her son with underwear while the demigod presiding over heaven offered Him an umbrella. Lord Brahma presented Lord Vamana with a waterpot, the seven sages gave Him Kusha grass, mother Saraswati offered the Lord Rudraksha beads, Kuvera gave Him a pot for begging alms while mother Parvati gave the Lord His first alms.

When Vamana deva heard that Bali Maharaja, the king of demons, was performing an Ashwamedha yajna under the direction of the brahmanas of the Bhrigu dynasty, the Lord proceeded to the assembly to shower His mercy upon Bali Maharaja. The sacrifice was being held in the field known as ‘Bhrigukaccha’ situated on the northern bank of river Narmada. Lord Vamana, who was shining effulgently, eclipsed all the other brahmanas and their disciples. Bali Maharaja welcomed the lord and offered Him a seat with great jubilation. The King washed the lotus feet of the Lord and placed upon his head the water that had washed the feet of the Lord. The King glorified Lord Vamana and requested Him to ask for something in charity. Bali Maharaja conveyed that Vamana deva could take whatever He wanted from Him, including gold, cow, furnished house, food, daughter of a brahmana for his wife, villages, horses, chariots, etc. 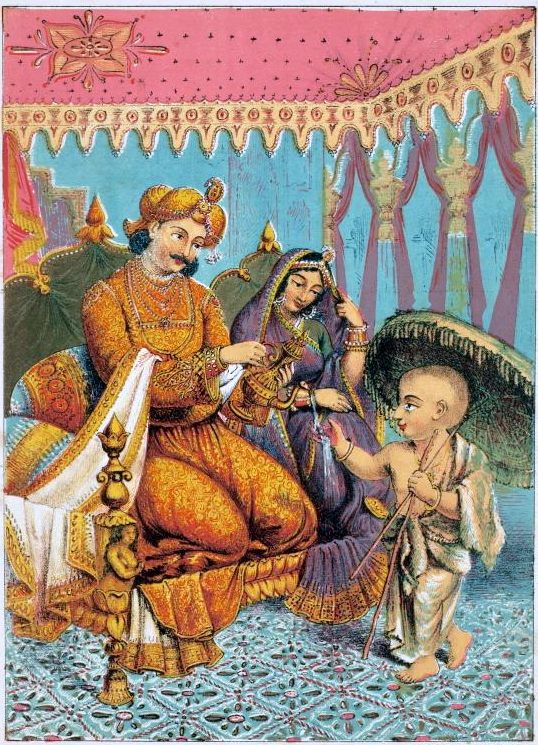 Lord Vamana deva highly glorified Bali Maharaja as he acted in the footsteps of the great devotee Prahlada Maharaja, who was his grandfather. He praised Bali Maharaja for his statements that were in accordance with religious etiquette. Lord Vamana added that none in Bali Maharaja’s family had ever refused to give charity to a brahmana, nor have they refused to fulfill their words after making such a promise. The Lord cited the example of Virochana, Bali Maharaja’s father, who had given the remaining duration of his life in charity to the demigods who had approached him disguised as brahmanas. Although Virochana knew very well that they were actually demigods in disguise, he did not refuse to give them in charity. Praising him thus, Lord Vamana begged Bali Maharaja to give him three steps (to the measurement of His steps) of land in charity. Hearing of this request, Bali Maharaja implored the Lord to ask for more. The King added that Lord Vamana could have asked for an entire island, instead of the mere three steps of land. The Lord then explained how one who could not be satisfied with little, can never be satisfied by possessing more, as greed possessed no limits.

Sukracharya, the spiritual master of Bali Maharaja, cautioned the king that the dwarf brahmachari was actually Lord Vishnu, the imperishable supreme Lord, who had appeared to fulfill the purpose of the demigods. Sukracharya added that the king had positioned himself in a difficult situation by promising to give land to the brahmana. ‘The dwarf has come to rob you of all your land, wealth, beauty, power, fame, education and deliver them to Indra’, he warned. Sukracharya chastised Bali Maharaja and predicted that Vamana deva will occupy all of the three worlds and outer space with his steps. Sukracharya counseled Bali Maharaja to decline his promise to Lord Vamana. He argued quoting from ‘Bahvricha shruti’ that since Bali Maharaja did not utter the word ‘om’ before making his promise, hence it did not stand and could be turned down.

Bali Maharaja attended to the advice of Shukracharya and remained silent for some time. After considering his words, Bali Maharaja replied that being the grandson of Prahlad Maharaj, the great devotee, how can he deny his promise simply for the greed of money? That would be sinful and deceitful. He expressed that material opulence is predestined to be separated from a person at the time of his death. Therefore, it was wise to use the material riches to serve a brahmana instead. Moreover, a good reputation was far more important to Bali Maharaja than material opulence, and he wanted to sustain it by not cheating a brahmana. Bali Maharaja added that Lord Vishnu is the ultimate objective of all Vedic sacrifices and hence the Lord must be worshiped under all circumstances. Therefore if the same Lord Vishnu has now come before him, he must accede to his request without hesitation. Shukracharya became angry hearing the words of Bali Maharaja. He cursed the king saying that he would soon become bereft of all his opulence as he had disobeyed his spiritual master. But even the curse could not deviate Bali Maharaja from his determination to serve Vamana deva. He washed the lotus feet of Lord Vamana and then took that water upon his head. Seeing the appropriate, non-duplicitous act of Bali Maharaja, the denizens of heaven showered flowers upon him. 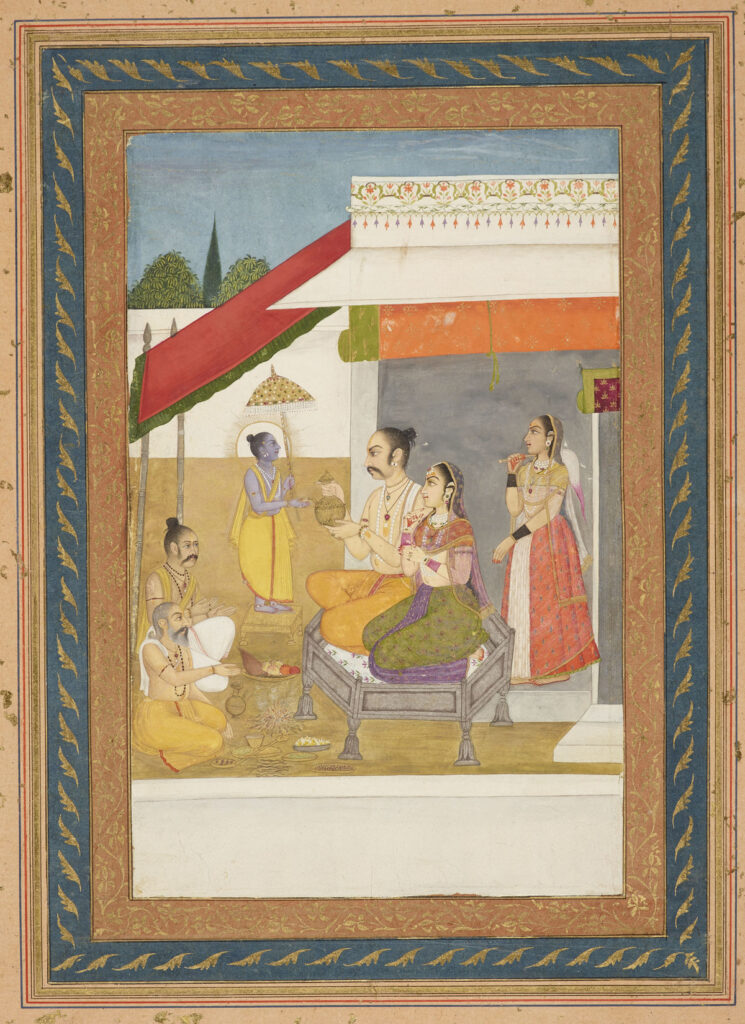 The unlimited Supreme Lord, who had assumed the form of Vamana, then began increasing in size, until everything in the material world was visible within His body. Bali Maharaja, along with the members of the assembly observed the universal form of the Lord, which included all the gross material elements, senses, sense objects, mind, intelligence, false ego, living entities, the various planets, earth, sky, oceans, stars, etc. Bali Maharaja could behold the gigantic body of the Supreme Lord holding a lotus, club, conch, and Sudarshan chakra in His hands.

With one footstep, Lord Vamana covered the entire surface of the earth, the sky with His body, and all directions with His arms. With His second step, He covered the heavenly planets. There was no place for the Lord to place His third step. Brahma washed the Lord’s lotus feet with water from his kamandulu. That water transformed into the water of Ganges which flew down from the sky purifying the three worlds. The followers of Bali Maharaja became angry and tried to attack Lord Vamana. They were swiftly defeated by the followers of Lord Vishnu and were made to flee to the lower regions of the universe. Thereafter, Garuda, the eagle carrier of Lord Vishnu, arrested Bali Maharaja with the ropes of Varuna. Witnessing the arrest of Bali Maharaja, there was a huge roar of lamentation in both the upper and the lower planetary systems. Vamana deva then further tested the devotion of Bali Maharaja. He asked where He should land His third step as all of the universe was already covered with His two steps. The Lord then suggested that Bali Maharaja should live for a few years in hell as he could not meet his promise to deliver three steps of land in charity. 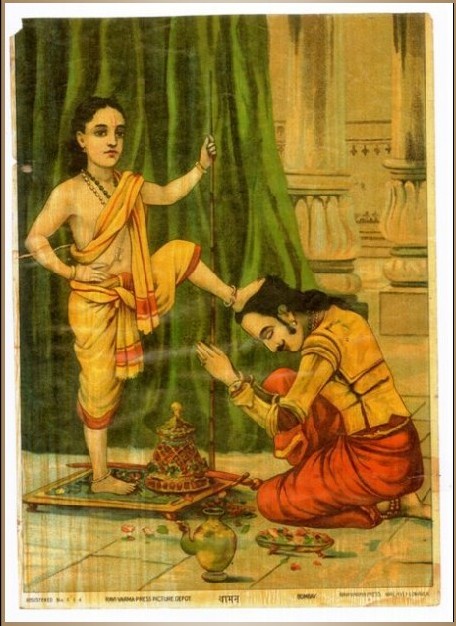 The Supreme Lord then explained how material opulence and aristocracy may sometimes become barriers in one’s spiritual journey as they attach one to pride and false ego. But this opulence never disturbs a pure devotee of the Supreme Lord. If a human being is born in aristocracy, possesses a good education, wealth, etc but is not proud of his opulence, it has to be understood that such a person has received special blessings of the Supreme Lord. The Lord then went on to glorify Bali Maharaja, who had remained true to his word and fixed in his devotion, despite being robbed of his material opulence, deserted by his friends and relatives, defeated and arrested by his enemies, rebuked, and cursed. The Lord then glorified Bali maharaja’s tolerance and awarded him the planet of Sutala which was once created by Viswakarma on the orders of the Supreme Lord. 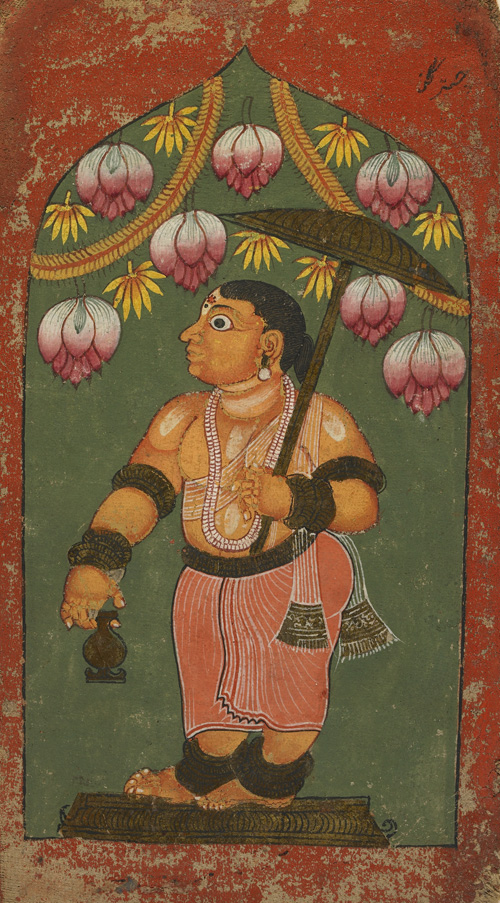 The planet of Sutala is personally protected by the Supreme Lord and is free from all material miseries and disturbances. The Lord promised that no one would be able to conquer Bali Maharaja in Sutala. The Lord would personally vanquish the demons who would challenge Bali Maharaja’s rule. Being protected by the Supreme Lord, Bali Maharaja could reside peacefully along with his associates in Sutala. Moreover, as the king would be able to associate with the Supreme Lord in Sutala, he would become cleansed of the materialistic ideas and anxieties that have been born from his association with the demons. The Lord also announced that Bali Maharaja, after ruling Sutala for a definite period of time, shall attain the position of the king of heaven (Indra) during the rule of Manu known as Savarni. Bali Maharaja learned that the highest treasure of life is to acquire unalloyed devotional service under the shelter of the Lord’s lotus feet in full surrender. Being fixed in this conclusion, his heart full of ecstatic devotion and his eyes full of tears, he offered obeisances unto Lord Vamana deva and then, with his associates, entered the planet of Sutala.