Madhurya Rasa falls within the purview of Krishna Bhajan and constitutes the highest grade of divine Love. It is where a devotee approaches God as His consort. This is unlike the so-called love of this material world where one primarily concerns himself with his/her sensuous pleasures. The distance between the servant and the Lord which was distinctly visible in the cases of Shanta and Dasya Rasas, and indistinctly visible in the case of Sakhya and Vatsalya Rasas, is now completely absent in Madhurya. The servant and the Lord are now united as never before. The servant serves her lord with everything. She lives for her Lord and dies for Him. There is nothing that she cannot do to make Him happy. His pain and grief become her own. Now, the servant cannot enjoy anything which does not make her Lord happy. She takes pleasure in putting on an ornament if it pleases her Lord. She even gladly welcomes death if it is a service unto Him. Such is the selflessness of love manifested in Madhurya. Srimati Radharani and the other Gopis of Vrindavana represent devotees in this category.

Madhurya rasa is also specified as ‘Mukya bhakti rasa’ or the principal of all devotional mellows. Unless one is devoid of all material attachments, one cannot relish the divine mellow of ‘Madhurya’. Madhurya rasa is most esoteric and rare. Hence, it is kept largely confidential. Shanta, Dasya, Sakhya, Vatsalya, and Madhurya exist eternally in Goloka Vrindavan. They are compared to Copper, bell metal, Silver, Gold, and touchstone respectively.

In Madhurya Rasa, Krishna is looked upon as ‘nagara’, the epitome of unparalleled beauty, charm and amorous pastimes. He is the ultimate object of love. The gopis of Vrindavan are the recipients of this divine love. Of all the gopis, Srimati Radharani is the most exalted. 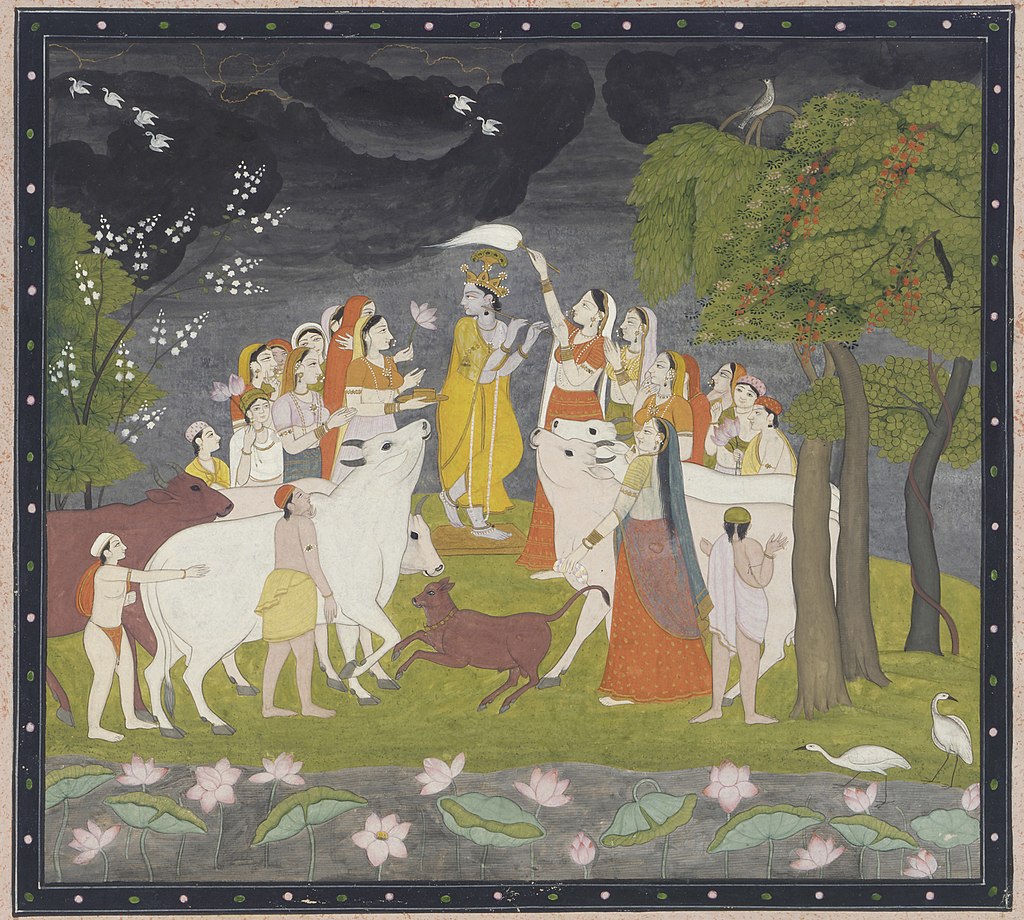 The stimulants (uddipana) of this rasa include the sound of Murali (Krishna’s flute), Krishna’s sidelong glances, His smile, His beautiful form, etc. Madhurya rasa can be further divided into two – Vipralambha and Sambhoga.

See also  What is Yoga ? | All you need to know about Yoga

Vipralambha represents the separation between lovers, which further intensifies their love for each other. Vipralambha has further subdivisions – purva raga, mana, and pravasa.

‘Purva raga’ are the emotions and sentiments that the lovers encounter before meeting each other. ‘Mana’ is the hurt pride or the pique of the lover. ‘Pravasa’ represents the situation where one is bereft of the lover’s presence.

Sambhoga represents the inexplicable exultation that is experienced as the lover and the beloved meet with each other.

Those who enjoy conjugal love with Krishna as His wife, are promoted to the spiritual realm of Dwarka, where the devotee becomes the queen of the Lord. Those who follow in the footsteps of the gopis of Vrindavan, and enjoy conjugal love with Krishna as His lover, are promoted to the realm of Goloka Vrindavan. There are two eternal aspects of Krishna – atmaramata and pararamata. ‘Atmaramata’ aspect denotes His completeness and self-satisfaction whereas ‘Pararamata’ denotes that He is the supreme enjoyer of the separated expansions and energies emanating from Himself. In the ‘Atmaramata’ aspect, the enjoyment of rasa (divine mellows) is solely reposed within Krishna, where He accepts no assistance from any other entity. In this aspect, Krishna is eternally self-satisfied. However, in the ‘Pararamata’ aspect, Krishna enjoys rasa, with the charming assistance of other entities. These two opposing elements – self-satisfaction and assisted enjoyment, harmoniously coexist within Him. 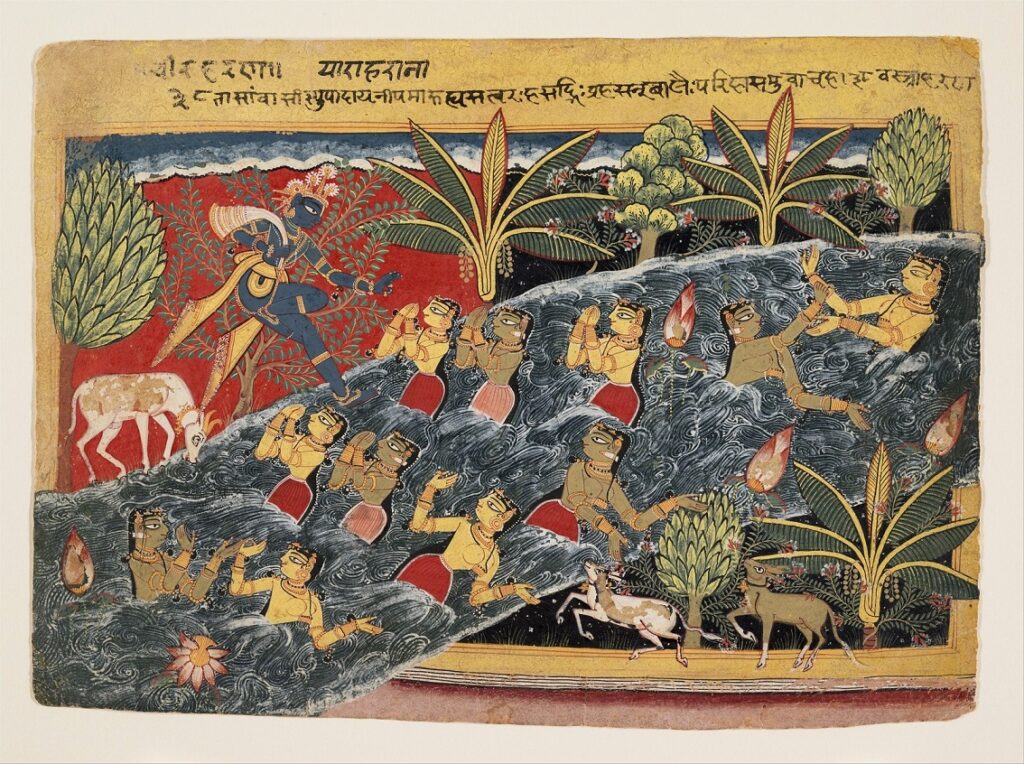 The impersonal brahman feature of Krishna is devoid of any rasa (divine mellow). As Krishna’s personal feature unfolds, rasa increasingly becomes manifest. In Shanta rasa, Krishna is looked upon as ‘Isvara’ or the supreme controller. In Dasya rasa, He is worshiped as the eternal master. In Sakhya rasa, He is the Supreme friend while in Vatsalya rasa, Krishna is loved as one’s own son. In Madhurya rasa, Parakiya bhava (Paramour mood) is considered superior to the Svakiya bhava (married mood).

The material world is a perverted reflection of the spiritual world. Whatever is held in the highest esteem within the spiritual world, is considered to be the lowest in the material world. Hence parakiya bhava (Paramour mood) which represents the most sublime of Rasas i=on the spiritual platform, is condemned in the mundane plane. Whereas dasya rasa, characterized by dispassionate temperament and neutrality of feelings, which is at the lowest rung of rasa gradation spiritually, is held in the highest regard in the mundane plane. In the material world, since all the parties of a relationship are jivas (living entities), the entire reciprocation is transactional and exploitative by nature. However, in the spiritual context, all living entities are parts and parcels of Krishna and are eternally bound to Him in love. Therefore loving exchanges with Krishna on the transcendental plane is completely sanctified, because Krishna is the supreme enjoyer.

The ‘Atmaramata’ feature of Krishna is at the bottom of the Rasa barometer. Rasa gradually expands upwards as Krishna reveals His ‘Pararamata’ feature that finally culminates into the highest status of ‘Parakiya Madhurya rasa’.

Vaikuntha is the portion of the spiritual world, where Lord Narayana, the supreme Lord,  is worshiped with awe and reverence. It is dominated by ‘Aishwarya’ or the opulence of the Supreme Lord. Here, Lord Narayana, embellished with divine attributes, is served by countless servants. In Vaikuntha, Lord Narayana manifests His svakiya rasa, and His wives – Sri, Bhu, and Nila devi, serve Him as their husbands. 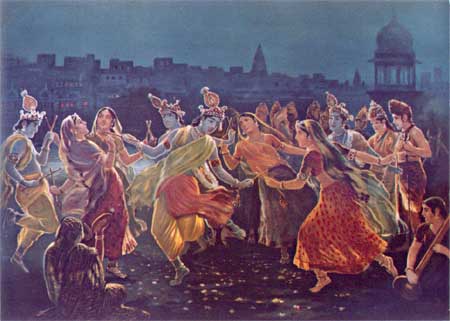 Above Vaikuntha, lies the realm of Goloka, where the Supreme Lord, manifests Himself as Vrajendranandana Krishna. Here, Krishna manifests His ‘Parakiya rasa’ and the gopis of Vrindavan serve Him accordingly. The Gopis, because of their intense love for Krishna, trespass all the religious principles, even disregarding their nuptial vows, to surrender and win the love of their beloved Krishna. This is the culmination of all rasas and the highest manifestation of divine love.

Gopis are superior to the lakshmi devis of Vaikuntha :

Na tatha me priyatamo brahma rudras ca parthiva
Na ca lakshmir na catma ca yatha gopi jano mama
(Adi Purana)
–
Not even Brahma, Shiva, Lakshmi devi, or even My own self is as precious to Me as are the gopis of Vrindavan.

It is worthwhile mentioning at this point that there is no difference between Goloka of the spiritual realm and Mathura Mandala of this mundane world. Places such as Vrindavan and Gokula lie within the precincts of Sri Mathura Mandala. The eternal spiritual abode of Goloka where Krishna eternally exhibits His transcendental pastimes manifests in the material world as Sri Mathura Mandala. It is where the Lord manifests His ‘prakata lila’ (materially manifest pastimes). Goloka and Gokula are identical in all respects. Devotees who are qualified, can perceive Goloka even within Gokula of this material world.