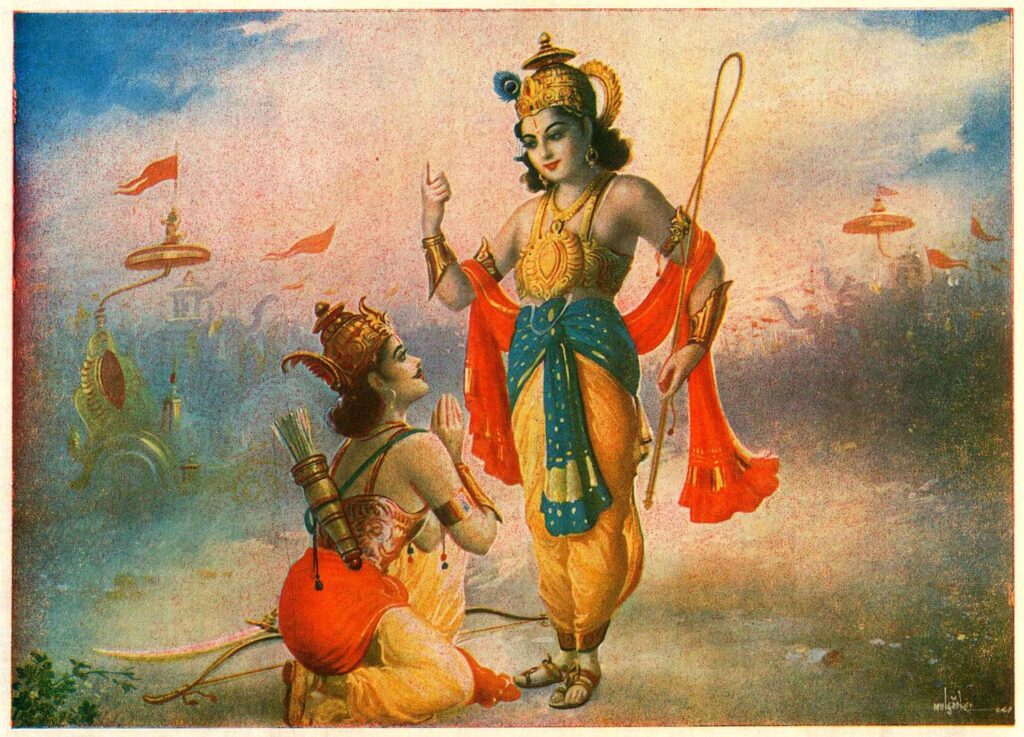 Sakhya Rasa is the stage of divine Love where a devotee approaches the Supreme Lord as His friend. Sri Krishna, His friends, and confidants are known as ‘Sakhas’ (friends). The two-handed form of Sri Krishna, playing upon His flute, is the object of meditation in Sakhya rasa. Unlike Dasya rasa, the emotions of awe and reverence are largely missing in Sakhya rasa. Srila Rupa Goswami explains in Bhakti Rasamrita Sindhu (Western division) –

Vimukta sambhrama ya svad visrambhatma ratir dvayoh
Prayah samanayor atra sa sakhyam sthayi sabda bhak
–
‘Visrambha’, the affectionate exchange between two equals that is devoid of reverence and deference but is full of love, trust, and confidence is called ‘sakhya rasa’, the mellow of friendship. Thus, this emotion is the ‘sthayi bhava’ (foundational mood) of this mellow.

Srila Rupa Goswami further explains the meaning of the word ‘visrambha’. It is the admission of complete equality between two individuals, reflecting absolute trust and confidentiality between the two.

As discussed in the previous article, the divine love of a devotee situated in Dasya rasa can be in the stages of ‘Prema’, ‘Sneha’ and can even reach up to the stage of ‘Raga’, where even one’s own grief is deemed like happiness. However, a devotee in Sakhya rasa can even surpass ‘Raga’ and reach the stage of ‘Pranaya’. ‘Pranaya’ is completely bereft of feelings of awe and reverence. Even if a devotee is capable of accommodating such feelings of reverence, and even if such feelings are indeed appropriate, yet, the devotee experiencing ‘Pranaya’ is completely devoid of such emotions. Hence in Sakhya rasa, Krishna and His devotees exchange feelings of mutual love and affection assuming each other as equals. 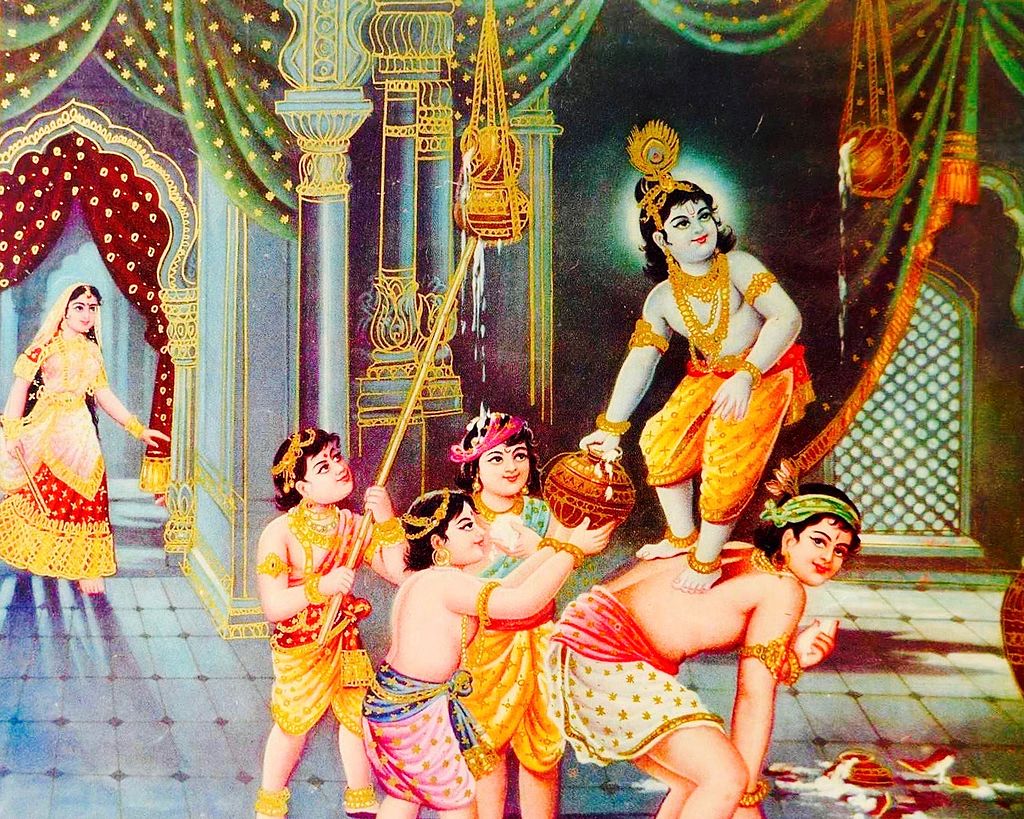 Devotees in sakhya Rasa are attracted to Krishna’s age, boyish charm, His horn, flute, conch, His humor, prowess, etc. They engage in various sports with Krishna like arm wrestling, dice playing, ball games, playing piggyback, playing with sticks, water sports, playing with monkeys, singing, dancing, etc. Sometimes they even share the same swing with Krishna while joking and chatting with each other.

Devotees in Sakhya rasa can be divided into two –  Dwarka sambandha and Vraja sambandha. Those friends (Sakhas) of Krishna who are related to Dwarka are classified as Dwarka sambandha. Arjuna, Bhima, Draupadi, Sudama Vipra, etc are examples of Dwarka Sambandha sakhas. Among these devotees, Arjuna is the closest to Krishna. Whereas those devotees who are related to Vrindavan are classified as Vraja Sambandha. Sridama, Sudama, Balabhadra, etc are examples of Vraja Sambandha Sakhas. 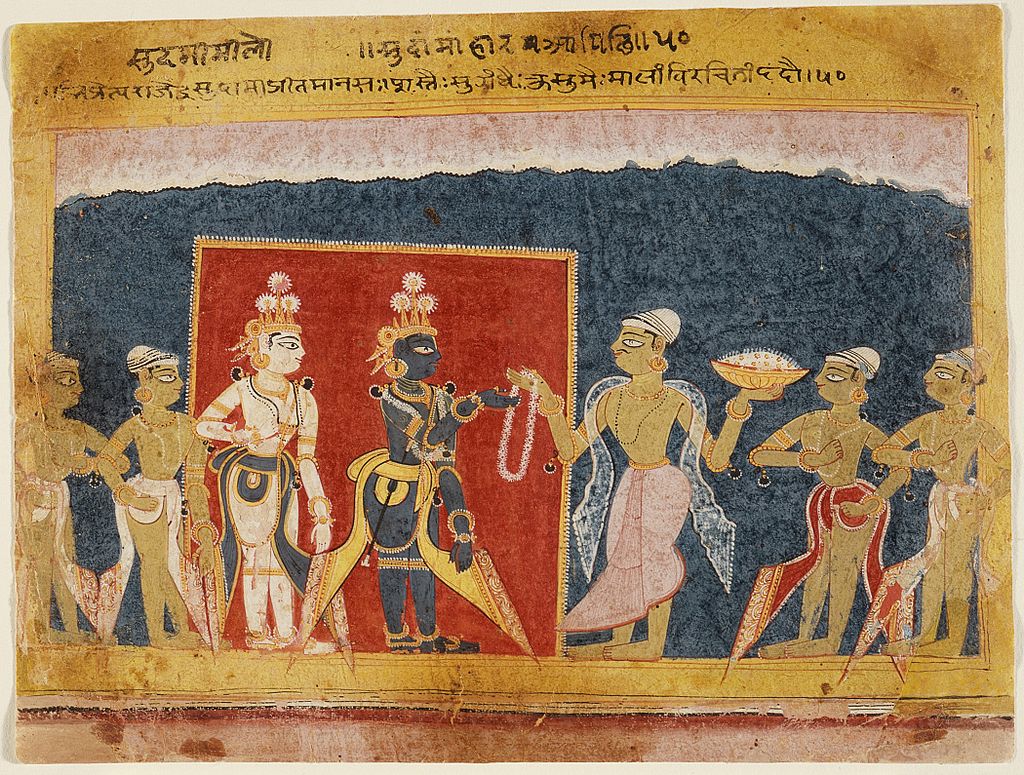 Suhrd Sakha – These are friends who are slightly older than Krishna and carry a sense of guardianship towards Krishna. They carry weapons to protect Krishna from any approaching danger. They are always eager to offer good advice to Krishna. Subhadra, Mandalibhadra, Gobhata, Yaksha, Virabhadra, etc are examples of ‘Suhrd sakha’ devotees.

Sakha – These friends are slightly younger than Krishna in age and are always eager to serve Him. They specialize in preparing Krishna’s chewing betel nut, decorating Krishna with Tilaka, sandalwood paste, and so on. Visala, Vrsabha, Ojasvi, Devaprastha, Maranda, Kusumapida, Karandhama are some of the devotees who fall within this classification.

Priya sakha – Priya sakhas are equal in age to Krishna and they possess the mood of comradeship and confidentiality towards Krishna. They are known for their bravery and engage in various sports and wrestling matches with Krishna. Occasionally they win and sometimes they lose. Sridama, Sudama, Dama, Vasudama, Stoka Krishna, etc are some of the eminent Priya sakhas of Krishna.

Priya Narma sakha – These are the most intimate friends of Krishna and occupy a superior position to the other three categories. They are the most flexible and enjoy a many-sided relationship with Krishna. They assist Krishna in His conjugal pastimes by arranging meetings with Gopis, conveying confidential messages to them, and so on. They also decorate Krishna with wildflowers, fan Him, etc. Subala, Arjuna, Gandharva, Vasanta, Ujjvala, etc are some of the Priya narma sakhas. Ujjvala is very humorous and frequently entertains Krishna by cracking jokes.