The following is a recitation from Sri Chaitanya Bhagavata, Adi Khanda, Chapter 10, Verses 79 – 131. In these verses, Srila Vrindavan das Thakur describes the marriage of Sri Chaitanya Mahaprabhu and Lakshmipriya devi.

A few words on these verses – Marriage of Sri Chaitanya Mahaprabhu with Lakshmipriya devi :

The adhivasa ceremony was performed by all the acharyas. There was happiness and bliss all around. The sacred chants of Vedic mantras were accompanied by the auspicious melodies of conch and Mridangas. Sri Chaitanya Mahaprabhu, who resembled a moon, sat in the midst of the brahmanas and participated in the adhivasa ceremony. Sri Vallabha Acharya performed the adhivasa ceremony on the behalf of His daughter Lakshmipriya. He presented beautiful sandalwood and garlands to Viswambhara. 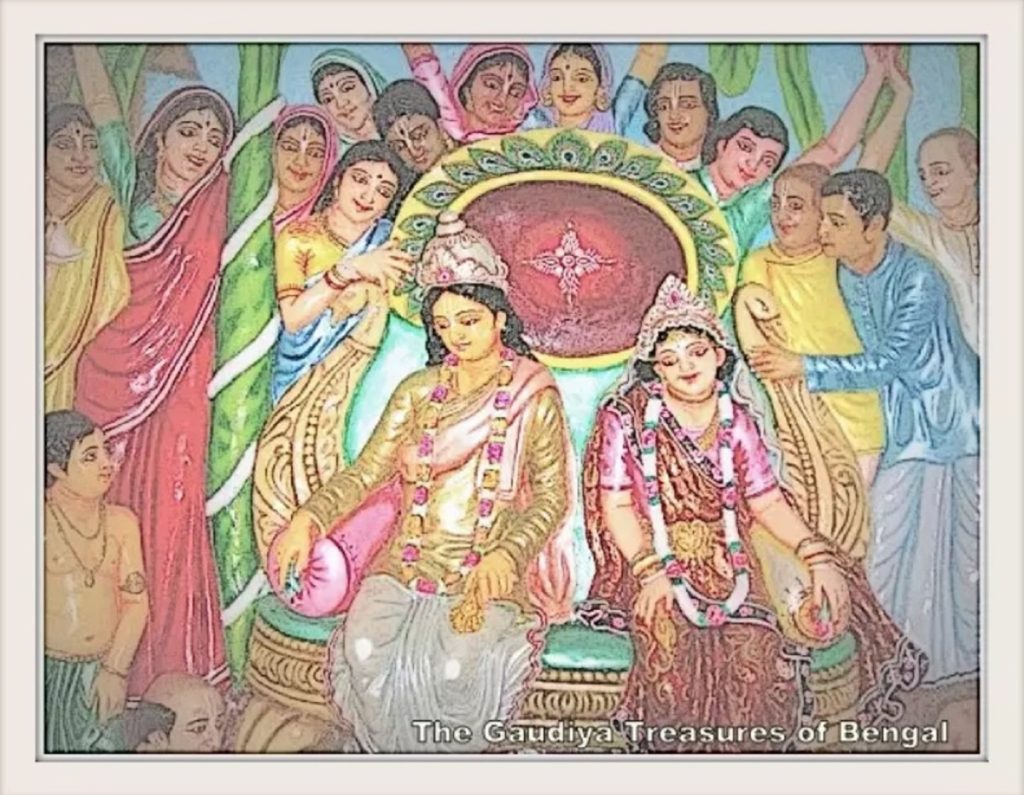 Waking up, the Lord bathed and performed charity. He respectfully offered oblations unto His forefathers. As per the prevalent customs, the barber cut His hair while the housewives cleansed His body. The sound of delightful music and the tinkle of a dancer’s ankle bells swelled the air. Joyful chatter appeared from all directions. Numerous guests and groups of chaste women thronged the place. Mother Saci satisfied all the chaste housewives with gifts of fruits, grains, vermilion, oils, and other commodities. Demigods, along with their wives, also arrived in human forms to attend in the marriage of the Lord. As Lord Viswambhara set out for marriage, the people of Nadia felt euphoric. They seemed to be going crazy in transcendental bliss. Huge crowds assembled to catch a glimpse of the Lord. Although the people were pushing and shoving each other, yet no one could move forward as they stood awestruck beholding the beauty of the Lord. Some women could not tie their hair in excitement. Throwing away their shyness and breathing heavily, they ran to catch a glimpse of Lord Gaurahari. Dropping their arrogance, and calling each other, all of them ran down the road in Nabadwip. Even the demigods stopped their celestial airplanes to relish the enchanting form of Lord Gauranga. Their wives could not take their eyes off the beautiful face of Lord Gauranga-sundara. The celestial women filled all directions with their auspicious songs.

Flooded with great joy and excitement, the ladies of Nadia sang as follows –

In the evening just before sunset, Nimai reached the house of Sri Vallabha Acharya at the chosen auspicious time. Witnessing the Lord, the guests were flooded with waves of ecstasy. Vallabha Acarya offered the Lord a seat with the utmost regard. He felt an indescribable joy within himself. Finally, he brought his daughter Lakshmipriya, entirely decorated with beautiful ornaments, and presented her before the Lord.  According to the marriage customs, Lakshmipriya was lifted off the ground and carried seven times around the Lord. Loud chanting of Lord Hari’s name resounded in all directions. Lakshmipriya devi sat with folded hands and offered silent prayers unto the Lord of her life. During the auspicious ritual of exchanging glances between bride and bridegroom, people showered flowers jubilantly from all directions on Sri Lakshmi and Narayana. Sri Narayana has now appeared as Lord Gauranga, while Sri Lakshmi devi has appeared as Lakshmipriya, the daughter of Vallabha Acharya. Thereafter Sri Vallabha, resembling Bhishmadeva, handed over his daughter unto the Lord. Vallabha Acarya then poured water on Viswambhara’s lotus feet. These are the same lotus feet that are washed and worshiped by Lord Brahma and Shiva to gain strength and power to create this material world. The fortunate brahmana offered his daughter according to the scriptural regulations and felt immense waves of ecstasy within his heart. The rest of the ceremonies were then properly concluded. The Lord spent that night in their house before leaving with His wife, the next morning.