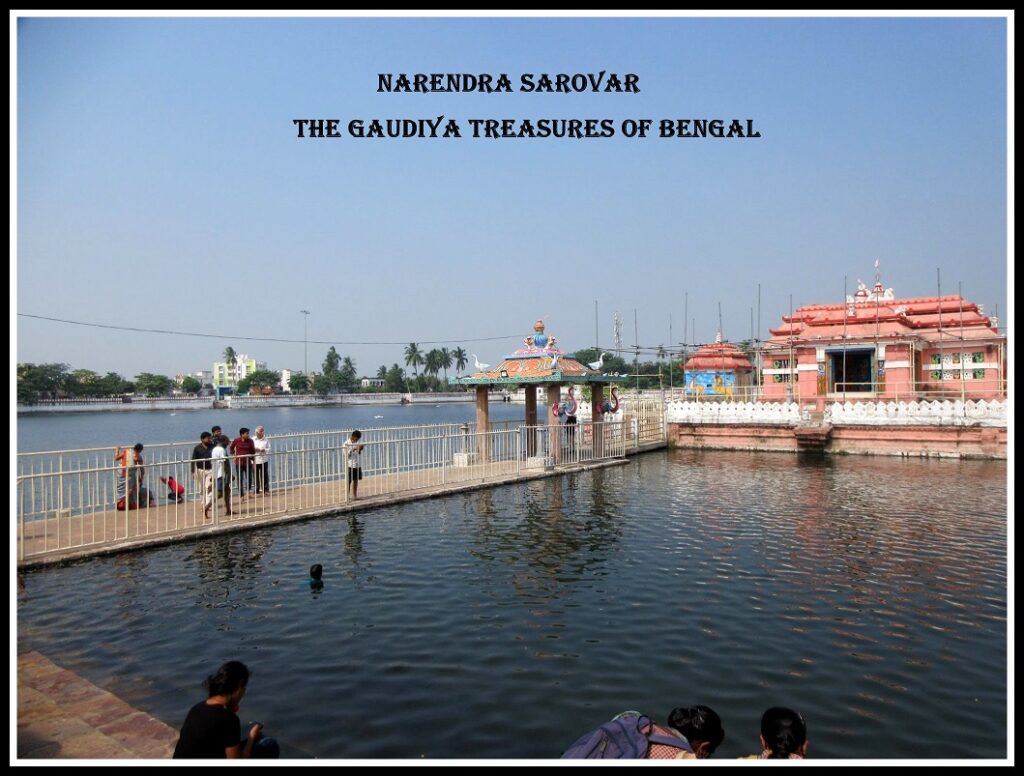 Narendra Sarovar is a large water body (873 feet long and 743 feet wide) located to the northeast of Jagannath temple in Puri, next to the Jagannath Vallabha garden. This pond is also known as ‘Chandan Pukur’ because the Chandan-yatra of Lord Jagannath takes place here. Narendra Sarovar is said to have been founded by King Bhanu Narasingha deva of Ganga dynasty. It was named after his mentor Nakhaposi Narendra Mahapatra. The representative deities of Lord Jagannath come here every evening for 21 consecutive days during His Chandan-yatra, starting from Akshaya-Tritiya (in the month of Vaisakha or April/May) up to Suklastami-tithi in May/June (Jaistha) to enjoy His boating pastimes (Nauka Leela). The boat ride on this serene lake helps relieve the intense summer heat and provide the Lordships with some comfort. 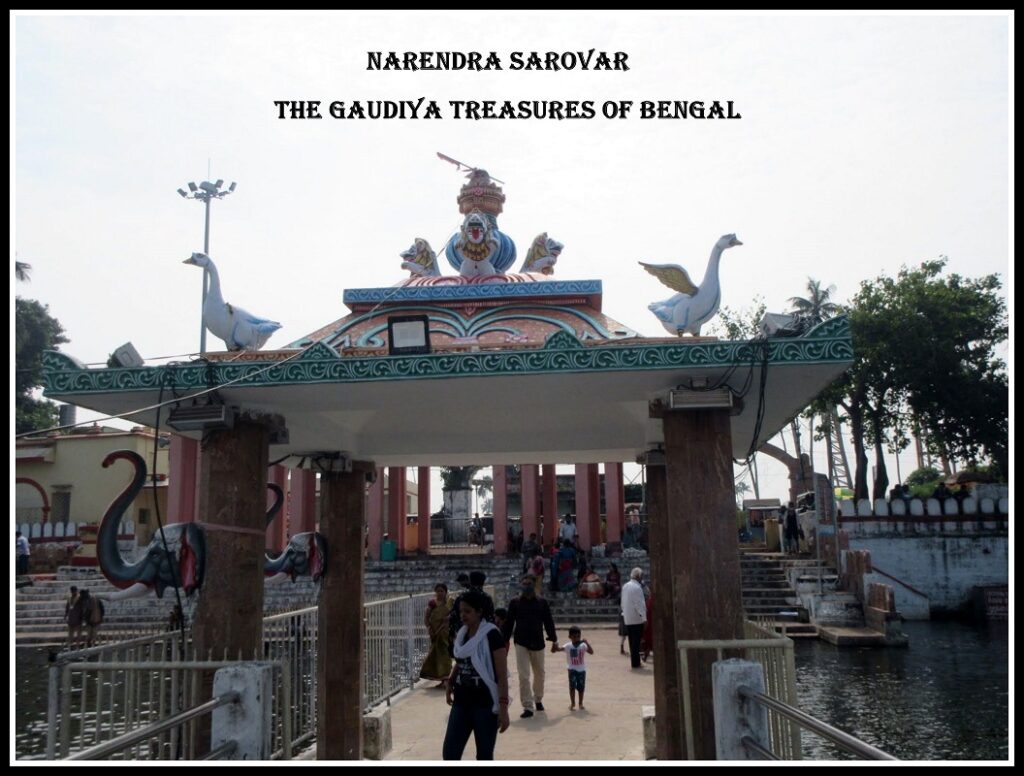 Lord Jagannath’s festive Deity (utsava murti) of Madan Mohana along with His consorts Sridevi and Bhudevi are bathed in sandalwood water and are decorated with aromatic flowers before they are brought to Narendra Sarovar. The Deities travel to Narendra Sarovar on seven different palanquins. Madan-Mohana, Sri and Bhu-devis arrive on one palanquin; Sri Rama Govinda on a second palanquin; and 5 more palanquins transport the Pancha Mahadevas (five Shiva lingas) – Lokanatha, Jamesvara, Kapal-mochana, Markandesvara and Nilakanthesvara. The entire procession route starting from the Jagannath temple to Narendra Sarovara is decorated with white canopies strewn with forest leaves, flowers, and fruits. In Narendra-Sarovar two nicely decorated boats are used for Chandan yatra: one boat for Sri Madan-Mohana and the other boat for Sri Rama Govinda and Pancha-Shivas. While the Lords ride in Their boats around the pond, throngs of devotees line the banks chanting holy names of Lord Hari and enjoy the most spectacular pastimes. After some time all the Deities are brought to the temple situated in the middle of the pond and are worshiped by the priests. After the festivities, the Deities return to their respective temples in their palanquins.

It was here at Narendra Sarovar that Sri Chaitanya Mahaprabhu had enjoyed water pastimes along with His associates, 500 years ago, during Lord Jagannath’s Chandan Yatra festival. 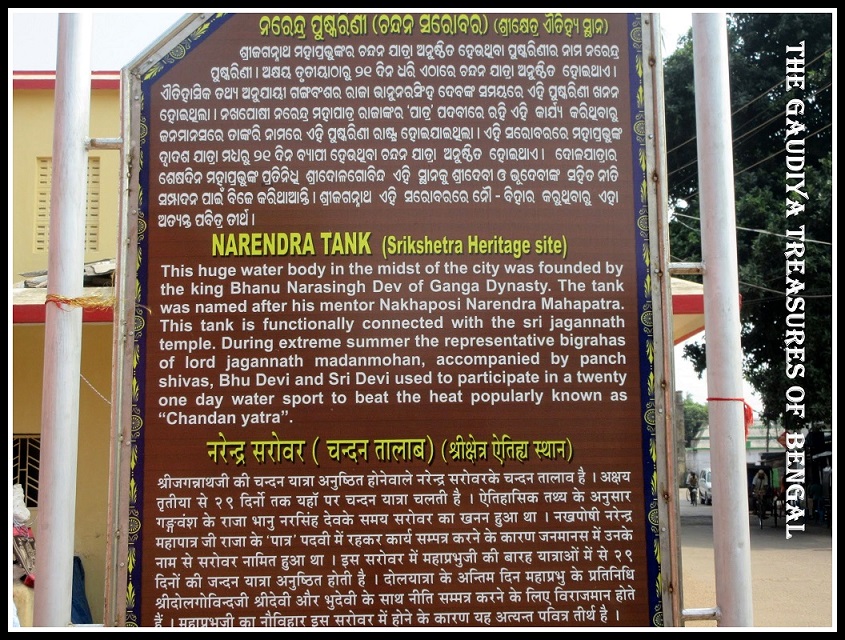 Lord Chaitanya leaped into the waters of Narendra Sarovar along with His associates. Just like earlier in Dvapara Yuga, the cowherd boys of Vrindavan played with each other in the Yamuna, similarly, Lord Chaitanya, who was none other than Krishna, played with His devotees at the waters of Narendra Sarovar. Amidst joyous Harinama Sankirtana, the devotees splashed water at one another. Nityananda Prabhu, Gadadhara Pandita, and Puri Gosai engaged in friendly water wars and none wanted to lose against the other. Vasudeva Dutta, Murari Gupta, Pundarika Vidyanidhi, Svarupa Damodara, Srivasa Thakura, SriRama, Haridasa Thakur, Vakreswar Pandita, Gangadasa, Gopinath, Chandrasekhara, and others – all enjoyed splashing water at each other. Though many Mayavadi sannyasis and materialists were also enjoying in the same lake, but by dint of Lord Chaitanya’s potency, none of them could come close to Lord Chaitanya or His devotees. One can achieve the mercy of Lord Chaitanya only by means of pure devotion. Material riches, knowledge, or austerity cannot help in this regard. Some of the people present criticized Lord Chaitanya’s water pastimes, while some heaped praises, understanding Him to be a great personality.