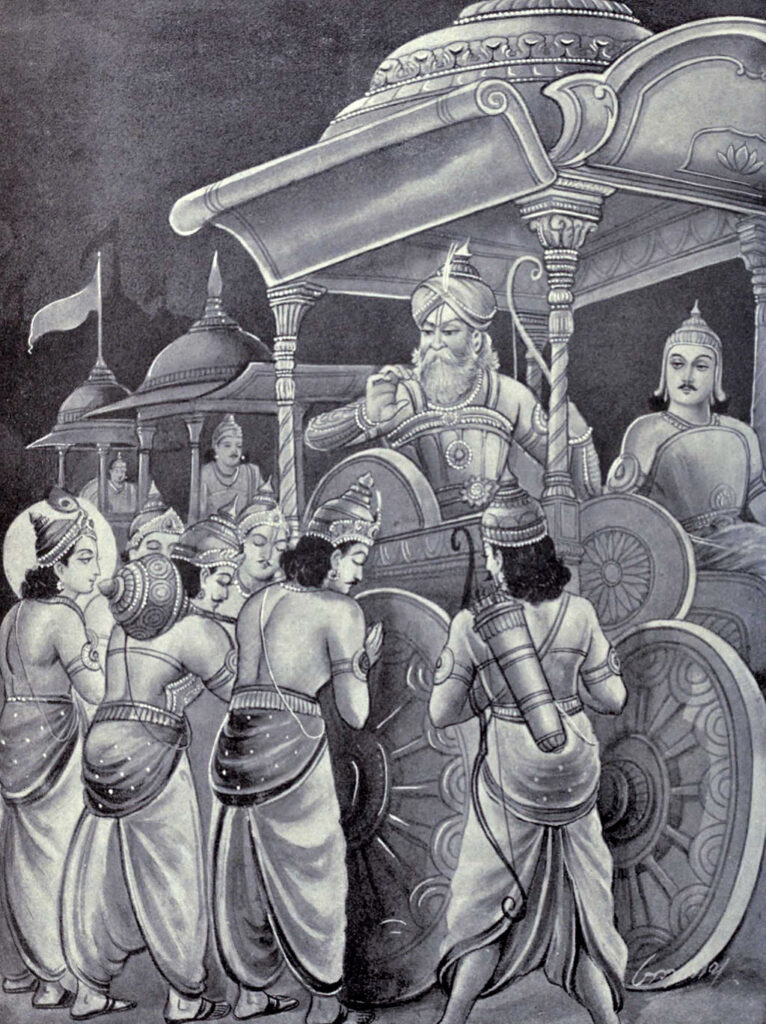 Twelve mahajanas are described in the Srimad Bhagavatam – Bali, Bhisma Pitamah, Lord Brahma, Janaka, Kapiladeva, Narada Muni, Sanat-Kumar, Shiva, Prahlada, Sukadeva Goswami, Svayambhuva Manu, Yamaraj. All of these twelve mahajanas are exalted devotees of the Supreme Lord and authorities on the science of devotion. Bhishma Pitamah, one of these twelve mahajanas, was a selfless soul who remained a lifelong celibate (brahmachari) simply to respect the wish of his father to marry Satyavati. Bhishma Pitamah yielded his claims to the royal throne. Although he was very powerful and core to the survival of the kuru dynasty, he never took any credits or honors for himself. He sided with the Kauravas in the battle of Kurukshetra although he understood very well that they would lose as Krishna, the Supreme Lord, had sided with the Pandavas.

In his earlier life, Bhishma, the son of Ganga, had studied in the holy land of Nabadwip (West Bengal, India) under the tutelage of Jahnu muni, his grandfather. He stayed over here for many days. It is over here that Bhishma pitamah had learned the science of devotional service, which he subsequently taught unto Yudhisthira on the battlefield of Kurukshetra.

Lying upon his deathbed of arrows, Bhishma pitamah had revealed to Yudhisthira Maharaja about the imminent advent of Lord Gauranga in Nabadwip. Bhishma deva had gathered this knowledge during his stay at Jahnudvipa (one of the nine islands of Nabadwip dham):

suvarna-varno hemango varangas chandanangadi
sannyasa-krc chamah santo nistha shanti parayanah
–
His body smeared with sandalwood paste, the Lord shall appear in a beautiful molten gold form. He shall accept the renounced order of life, be completely equipoised, and be rigidly fixed in chanting the holy names of Krishna. He shall be the highest abode of devotion and peace and shall silence the atheists.
(This verse was spoken by Bhishma deva to Yudhisthira at Kurukshetra)

Bhishma Pitamah glorifies Nabadwip and instructs on the Bhakti Yoga

A few hundred years back, Srila Bhaktivinoda Thakur, one of the great Vaishnava acharyas, had envisioned Bhishma pitamah in his trance, an encounter he had vividly documented in his book – Sri Nabadwip Bhava Taranga. A spiritually liberated Bhishma had then revealed to Bhaktivinoda about the dialogue that took place between him and Krishna on the battlefield of Kurukshetra, while the former lay on his deathbed. Bhishma also glorified Nabadwip dham and revealed to him the secrets to attaining devotional success. Bhishma Pitamah spoke as follows : 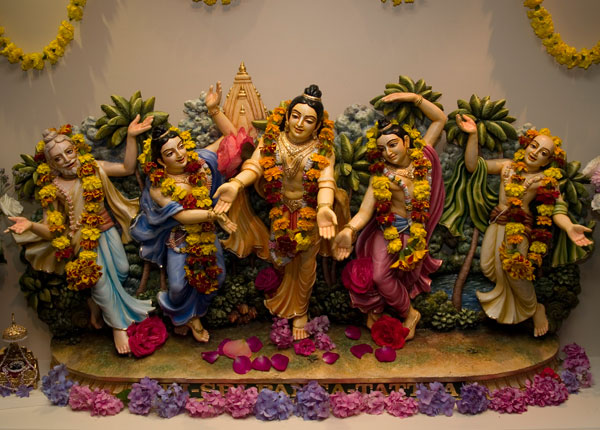 #2 (Lord Krishna continued) ‘Therefore abandon all other desires, reside in Nabadwip and perform the worship of Lord Gauranga. You no longer need to fear for any material bondage, as you shall definitely attain the lotus feet of Lord Gauranga’.

Bhishma then revealed to Srila Bhaktivinoda the following :

#3 By the desire of the Supreme Lord, the liberated personalities can behold the pastimes of Lord Krishna and Lord Gauranga at Nabadwip dham at all times. Causes of affliction of the conditioned soul, like lamentation, fear, death, anxiety, material desires, do not exist in this transcendental abode.

#4 The pure devotees of the Lord are intoxicated with the nectar of servitude unto Lord Krishna. They remain immersed in an ocean of joy performing their respective services unto the Lord. They do not experience deprivation or any worldly sorrows. All are situated here (in transcendental Nabadwip) in their pure spiritual bodies and possess only perfect desires.

#5 Lord Gauranga is the master of innumerable devoted associates who are either Nitya-Mukta (eternally liberated) or baddha-Mukta (previously conditioned souls and liberated now). The Lord performs His eternal pastimes along with each of them according to their devotional mood.

#7 By the Lord’s will, as long as you do not give up the material body, the nature of the holy dham of Nabadwip shall not fully be manifested before you. And your intelligence shall not give up its materially conditioned nature. 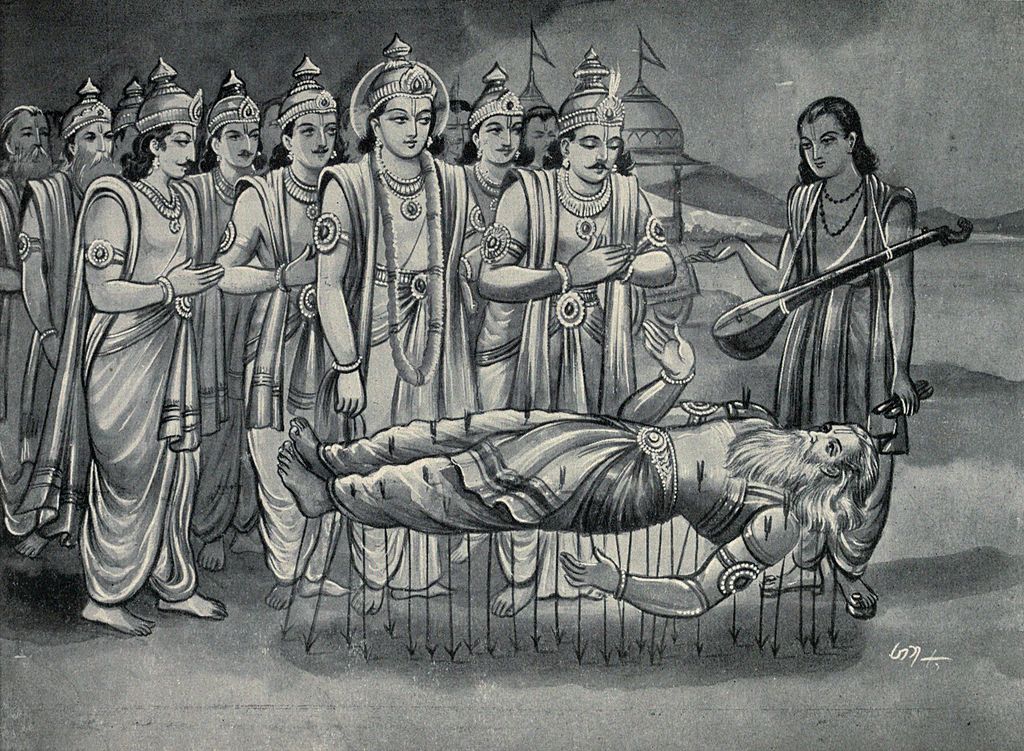 #9 O brother ! Till the point you possess a material body, stay very careful and steadfast in the path of devotion. Constantly serve the devotees, chant the holy name of Krishna and develop detachment from material temptations.

We do not burden any temple or religious organization for this website’s expenses. Neither are we engaged in the administration/governance of any temple/religious organization. All the expenses for this website are borne entirely by ourselves. Hence we request you to support us generously for continuation of this sacred service.
Click on a Tab to explore
Latest BooksBookstore details
International Bookstore
See also  Ishodyan - The enchanting garden of Lord Gauranga | Sri Navadvipa Bhava Taranga