There are five stages that a devotee goes through in his journey of ‘elevation to Krishna Consciousness’ and towards achieving pure ecstatic love for Krishna (The Supreme Personality of Godhead). These 5 stages of Bhakti (Krishna consciousness) are as follows.

To put it very briefly, hearing about the Absolute truth from one’s spiritual master is termed as ‘Sravana dasa’.  When the spiritual practitioner accepts these instructions as the truth, then he reaches a stage called ‘Varana dasa’. When he cultivates that mood along with blissful remembrance of the lord and His pastimes, he reaches ‘Smarana dasa’. When the spiritual practitioner is able to invoke that blissful mood within himself spontaneously, it is called ‘Bhavapana dasa’. And finally, when one completely detaches himself from the temporary material existence and obtains his desired constitutional form, by the mercy of Krishna, he attains ‘Prema Sampatti dasa’.

#1 Sravana dasa – The stage of Hearing

–
O King, if one gets the opportunity to hear from elevated saints the subject matters concerning Sri Krishna’s qualities, that are like a flowing river of nectar, and drinks this nectar with his undivided attention and faith, then hunger, thirst, fear, lamentation, illusion and other such unwanted drawbacks will never be able to assail one.

Having obtained faith (sraddha), the eager devotee craves to hear the qualities and pastimes of Lord Krishna from the mouth of an exalted devotee. This is the ideal stage for ‘Sravana dasa’. The pastimes of Krishna should be heard in a proper sequence with an aspiration to relish a particular rasa (devotional mellow) concerning the Supreme Lord. This stimulates one’s latent inclination for Raganuga bhakti (spontaneous devotional service). For instance, one might be attracted to the wonderful Sakhya bhava (camaraderie) of Subala. Intensely hankering for the devotional mood of a resident of Vraja is called ‘lobha’. Eagerly pursuing the devotional sentiments of the residents of Vrindavan with ‘lobha’ is the essence of Raganuga Bhakti. When a devotee happens to perceive the pastimes of Krishna as transcendent and eternal, he graduates from the platform of Sravana dasa.

At this stage of Varana dasa, the devotee’s heart is spontaneously drawn to the lotus feet of Krishna. He is overwhelmed with spiritual emotions. The mood of surrender and heartfelt yearning for the intimate service of Sri Radha and Krishna permeates the devotee’s enthusiasm in Varana dasa. The devotee’s spiritual master instructs the disciple at this stage to meditate upon the pastimes of Krishna by contemplating upon the asta-kaliya-Leela (pastimes of Radha and Krishna during eight periods of the day). The bonafide spiritual master guides the disciple to take full shelter of Harinama (holy names of Krishna), assuring him that soon his intense desire for intimate loving service towards the Supreme shall be realized.

The spiritual master chooses the spiritual identity of his disciple according to the inclination and tendency of the particular disciple. If the disciple does not have a natural spiritual mood, then he can request another from the Guru. When finally one’s spiritual identity fits, he vows to the Guru to never give it up. This is called Varana Dasa (the accepting stage).

The Following prayers of Srila Raghunath das Goswami expresses the heart of such a devotee :

Tvam natva yachate dhritva
Trinam dantair ayam janah
Sva-dasyamrta-sekena
Jivayamum su dukhitam
Na muncec charana yatam
Api dushtam dayamayah
Ato gandharvike ha ha
Muncainam naiva tadrisam
–
O Radhika! This most despicable and fallen soul throws herself at Your feet. Holding a straw between my teeth, I appeal to you to shower upon this heartbroken wretch the immortal nectar of servitorship at Your feet, so that I can be revived. The kind-hearted never abandon those who have surrendered to them. Therefore, compassionate as You are, please do not forsake me, a soul surrendered unto You. I am anxious to serve the Divine couple in Vrindavan beneath the shade of Your lotus feet.

Smarana dasa is the stage where a devotee continually meditates upon the pastimes of Radha and Krishna. He meditates upon his eternal spiritual identity as a servitor of the divine couple. Srila Rupa Goswami addresses the following in Bhakti Rasamrita Sindhu, Purva Vibhaga (1.2.294-6) :

Krishnam smaran janam casya prestham nija samhitam
Tat tat katha ratas casau kuryad vasam vraje sada
–
One should perpetually contemplate upon Krishna and should choose a very dear devotee who is a servitor of Krishna in Vrindavan. One should constantly engage in topics about that servitor and his or her loving relationship with Krishna. He should live in Vrindavan. If one is physically unable to travel to Vrindavan, one should reside there mentally.

Seva sadhaka rupena siddha rupena catra hi
Tad bhava lipsuna karya vraja lokanusaratah
–
In the transcendental realm of Vrindavan dham, one should serve Sri Krishna, the Supreme Lord, with emotions similar to that of His associates, and one should place oneself under the direct supervision of a particular associate of Krishna, following in his or her footsteps. This method is applicable for both an aspiring spiritual practitioner as well as a spiritually perfected soul.

Sravanotkirtanadini vaidha bhakti uditani tu
Yany angani ca tany atra vijneyani manisibhih
–
According to spiritual preceptors, the essential accessories of Vaidhi bhakti (devotion based upon strictly following scriptural rules and regulations), such as sravanam (hearing), loud kirtanam (chanting), and so on, are still most fitting and should be maintained for the cultivation of Raganuga bhakti (spontaneous devotional service for the Supreme).

This smarana dasa (stage of remembering) is divided into five further stages. The first is where one tries to cherish the eightfold pastimes of the Lord, but one’s mind strays. This is called Smarana. When one’s practice becomes steady, it is called ‘dharana’. When one can meditate upon all aspects of the Supreme Lord, it is called dhyana. When dhyana becomes steady, it is called anusmriti. When this becomes perfect, it is called samadhi. If these stages are followed progressively in smarana dasa, one’s spiritual identity and eternal service is quickly revealed unto him. Hence, recollection, engrossment, meditation, constant remembrance, and trance are the five levels of Smarana dasa.

When one enters ‘Smarana dasa’, he/she is able to chant the holy names of Krishna ecstatically. One should initially chant harinama (holy name of Krishna) with ullasa (joy) in one’s heart; then one should append ‘mamata’ (possessive attachment) to his/her chanting. Next, to this mixture of ‘ullasa’ and ‘mamata’, one should add ‘visrambha’ (loving affection based on firm faith and confidence in Krishna). Chanting in this manner will gradually refine one’s consciousness and strengthen one’s devotional mood (bhava). Bhavapanna dasa commences from this point. In smarana dasa, love is merely an external imposition. However, in bhavapanna dasa, genuine pure love of God is manifested spontaneously. In this way, a devotee finally attains Prema, the highest platform of divine love.

In ‘Bhavapanna dasa’, one attains his ‘svarupa siddhi’, which means that the practicing devotee now receives the transcendental vision and perception of his form as a Gopi maidservant of his spiritual master (Guru), whom he can now also perceive as a Sakhi of Srimati Radharani. To discern one’s eternal spiritual form in Vrindavan one must realize eleven specific items regarding one’s identity: one’s relationship, age, name, bodily color, membership in a particular group of Gopis, dress, order, residence, highest expectation in service, and the identity of the protecting gopi under whom she serves. 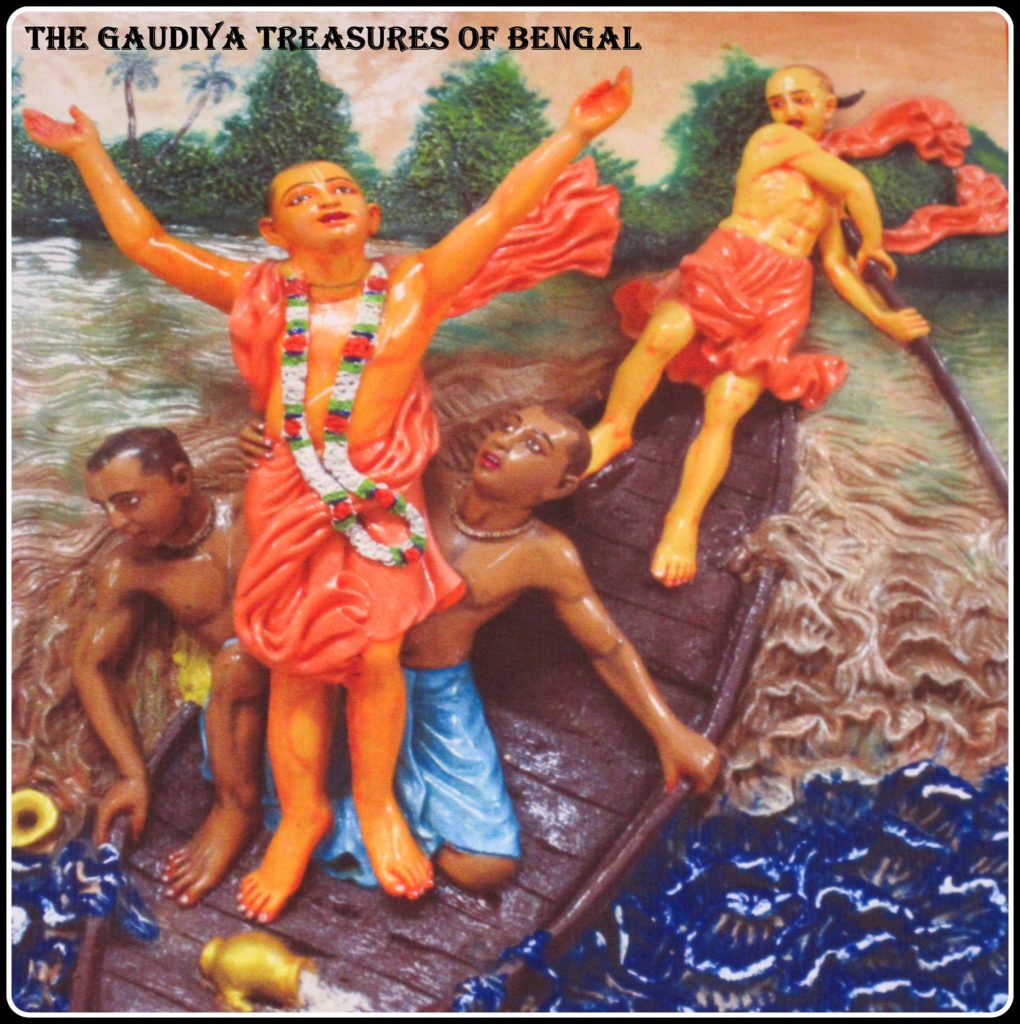 However, even though at this stage the devotee can see Krishna and discern his relationship with Him, until and unless the devotee is promoted to ‘Prema sampatti dasa’, where both his gross and subtle bodies are completely terminated, his perception of transcendence is never constant and perfect. In Bhavapanna dasa, the pure soul develops authority over one’s subtle and gross material bodies, but it is only when Krishna completely showers His causeless mercy upon the devotee, his association with this material world is completely severed. In the stage of Prema Sampatti dasa, one’s identification with the material world is severed and his/her identification with his/her spiritual body predominates, causing one to always perceive Vrindavan and serve Sri Radha and Krishna.

Jane cej jatabhave pi
Vaigunyam iva drsyate
Karya tathapi nasuya
Kritarthah sarvathaiva sah
–
If a person, who is completely disconnected from material enjoyment and has developed symptoms of pure ecstatic devotion, even if he is sometimes accidentally found not adhering to the scriptural standards of devotion, one should not be envious of him.

Dhanyasyayam navah prema
Yasyonmilati cetasi
Antar vanibhir apy asya
Mudra susthu sudurgama
–
Only the most fortunate souls can achieve such success in life. Those who are solely academic students of Vedic scriptures cannot comprehend how such a development takes place.