The following article explores the unending glories of a Vaishnava, his devotion, intense mood, and why he is worshipable for all. Similarly, Vaishnavism, the path of practicing loving devotion (Krishna Consciousness) towards the supreme Lord Krishna, is the most exalted and glorious of all the other means of self-realization.

te deva siddha-parigita-pavitra-gatha
ye sadhavah samadriso bhagavat prapannah
tan nopasidata harer gadayabhiguptan
naisam vayam na ca vayah prabhavama dande
(Srimad Bhagavatam 6.3.27)
–
Yamaraja instructs Yamadutas, “My dear servants, please do not approach such devotees (vaishnava), for they have fully surrendered to the lotus feet of the Supreme Personality of Godhead. They are equal to everyone, and their narrations are recited by the demigods and even the inhabitants of Siddhaloka. Please do not go near them. They are always protected by the club of the Supreme Personality of Godhead, and therefore Lord Brahma, I, and even the time factor are not qualified to chastise them”.

arcye vishnau sila dhir gurusu nara matir vaisnave jati buddhir
vishnor va vaisnavanam kali mala mathane pada tirthe ‘mbu buddhih
sri vishnor namni mantre sakala kalusa he sabda samanya buddhir
vishnau sarvesvarese tad itara sama dhir yasya va naraki sah
(Padma Purana)
–
One who considers the Deity in the temple to be a block of wood or stone, who thinks of the spiritual master in the disciplic succession as an ordinary man, who thinks of a Vaishnava in the Achyuta-gotra to belong to a certain caste or creed, who thinks of charanamrita or Ganges water as ordinary water, or one who considers the holy name of Lord Vishnu to be some material sound vibration – such a person is taken to be a resident of hell. 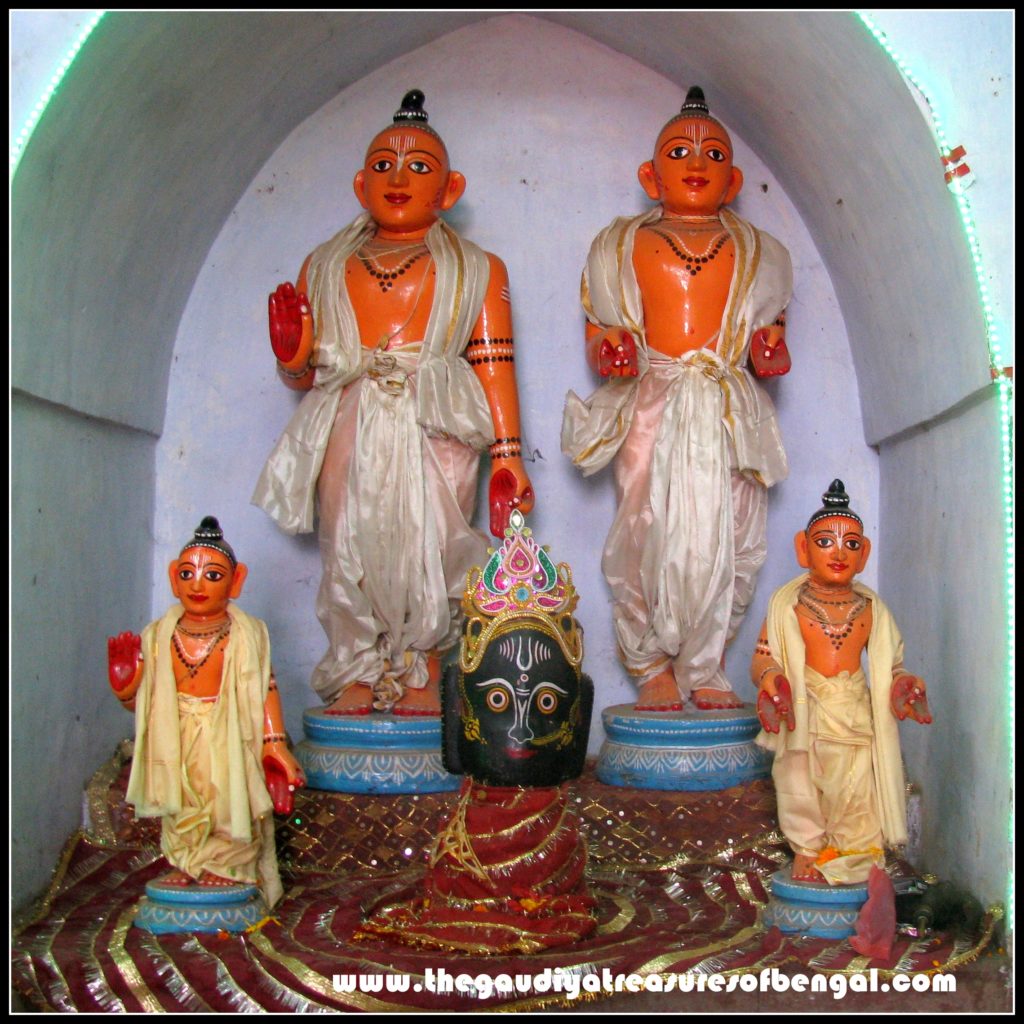 aham amara ganarcitena dhhatra
yama iti loka hitahite niyuktah
hari guru vimukhan prasasmi martyan
hari charana pranatan namas karomi
(Nrsimha Purana)
–
(Yamaraja said) I have been appointed by Lord Brahma, who is worshiped by the demigods, to judge people’s pious and impious actions. I harshly punish the worldly fruitive actors who are averse to the spiritual master and Lord Hari, while I offer my respectful obeisances unto the Vaisnavas who have surrendered themselves at the lotus feet of Lord Hari.

Srimad Bhagavatam confirms this above statement. King Rahugana was en route to Kapila Muni. He was in search of the truth. The great soul Bharata was carrying his palanquin. The king submitted to the great devotee Bharata, who then revealed how a living entity can attain the highest fortune.

rahuganaitat tapasa na yati na cejyaya nirvapanad grhad va
na chandasa naiva jalagni suryair vina mahat pada-rajo-‘bhisekam
(Srimad Bhagavatam 5.12.12)
–
My dear King Rahugana, unless one has the opportunity to smear his entire body with the dust of the lotus feet of great devotees, one cannot realize the Absolute Truth. One cannot realize the Absolute Truth simply by observing celibacy (brahmacharya), by strictly following the rules and regulations of householder life, leaving home as a vanaprastha (retired), accepting sannyasa (renounced order of life), or undergoing severe penances in winter by keeping oneself submersed in water or surrounding oneself in summer by fire and the scorching rays of the sun. There are many other processes to understand the Absolute Truth, but the Absolute Truth is only revealed to one who has attained the mercy of a great devotee of the Supreme Lord (Sri Krishna).

sva dharma nisthah sata janmabhih puman
virincatam eti tatah param hi mam
avyakritam bhagavato ‘tha vaishnavam
padam yathaham vibudhah kalatyaye
(Srimad Bhagavatam 4.24.29)
–
(Lord Siva said) “A person who executes his occupational duty properly for one hundred lifetimes becomes qualified to occupy the post of Brahma, and if he becomes more qualified, then he can approach Lord Shiva. However, a person who is surrendered unto Lord Krishna, or Vishnu, and engaged in unalloyed devotional service is immediately promoted to the spiritual planets. I and other demigods attain these planets only after the destruction of this material world”.

daivi hy esa guna mayi mama maya duratyaya
mam evaye prapadyante mayam etam taranti te
(Bhagavad Gita, 7.14)
–
This divine energy of Mine, consisting of the three modes of material nature, is very difficult to overcome. But those who have surrendered unto Me can easily cross over it.

yada pasyah pasyate rukma varnam
kartaram isam purusam brahma yonim
tada vidvyan punya pape vidhuya
niranjanah paramam samyam upaiti
–
A devotee of the Supreme Lord, who is blessed with transcendental vision and the eyes of devotion, can perceive the Supreme Person, his creator and master, the Lord of the brahmanas, possessing a golden bodily complexion. Such a devotee is endowed with transcendental knowledge. He is liberated and delivered from false material ego. He gives up piety and sin, growing completely pure and equipoised.

bhaktis tvayi sthira tara bhagavan yadi syad
daivena nah phalati divya kisora murtih
muktih svayam mukulitanjali sevate ‘sman
dharmartha kama gatayah samaya pratiksah
–
O my Lord, if one engages in Your pure devotional service (free from karma, jnana, and sense gratification) with determination, You become visible in Your original transcendental youthful form as the Supreme Personality of Godhead. As far as liberation is concerned, she stands before the devotee with folded hands waiting to render service. Religion, economic development, and sense gratification (which are difficult to attain for non-devotees) are all automatically realized without any separate endeavor by the devotee.

A Vaishnava (pure devotee of Lord Hari) does not crave for material fortunes. Being engaged in the service of the Lord, he lives full of ecstasy. On the other hand, the non-devotees are always troubled by contamination and lamentation. A devotee only endeavors for pure devotional service that is uncontaminated with any desire to satisfy one’s own self. As saint Kulasekhara Alvar (a pure devotee), who had been a king of Kerala, summarizes the sentiments of a devotee in the following words –

nastha dharme na vasu nicaye naiva kamopabhoge
yad bhavyam tad bhavatu bhagavan purva karmanurupam
etat prarthyam mama bahu matam janma janmantare pi
tvat padambhoruha yuga gata niscala bhaktir astu
–
My Lord, I have no attraction for performing religious rituals or possessing an earthly kingdom. I do not care for sense enjoyments; let them appear and disappear as per my previous deeds. My only wish is to be fixed in devotional service to Your lotus feet, even though I may continue to take birth in this world life after life.

maha prasade govinde nama brahmani vaishnave
svalpa punyavatam raja visvaso naiva jayate
–
Unfortunate people who are not highly elevated in pious activities do not possess faith on the remnants of food (Mahaprasada) of the Supreme Personality of Godhead, nor in Govinda the Supreme Lord, the holy name of the Supreme Lord, or in the Vaishnavas.

Kaivalyam narakayate tri dasa pur akasha puspayate
Durdantendriya kala sarpa patali protkhata damstrayate
Visvam purna sukhayate vidhi mahendradis ca kitayate
Yat karunya kataksa vaibhav-avatam tam Gauram eva stumah
–
For those who have attained the merciful sidelong glance of Lord Gauranga, impersonal liberation (merging into the brahmajyoti) becomes as painful as going to hell, the heavenly cities of the demigods seem to be as trivial as mere flowers floating in the sky, the venomous and poisonous fangs of the untamable black snakes of the senses become extracted and uprooted, the whole world which is otherwise full of misery becomes full of supreme joy and the exalted positions of Brahma, Indra and all the demigods become as insignificant as those of tiny insects. We pray to that Lord, Sri Gaurasundara.

upasatam va guru varya kotir
adhiyatam va sruti sastra kotih
Chaitanya karunya kataksa bhajam
bhavet param sadya rahasya labhah
–
Whatever result one achieves by worshiping millions of the best of the wayward karmi and jnani spiritual masters or by studying millions of Vedic literatures, we don’t care. But by associating with devotees who have received the merciful sidelong glance of Sri Chaitanya one can immediately understand the great secret of pure love for Lord Krishna. It is useless for those who are attached to the principles of varna-ashrama (caste and class) to accept millions of Gurus or study millions of Vedic literatures unless they become unalloyed devotees of the Supreme Lord.

kriyasaktan dhig dhig vikata tapaso dhik ca yaminah
dhig astu brahmaham vadana pariphullan jada matin
kim etan socamo visaya rasa mattan nara pasun
na kesancil leso py ahaha milito gaura madhunah
–
Condemned are those who are fond of the Vedic fruitive rituals! Condemned are those self-controlled persons who are fond of severe austerities! Condemned are those people with material conceptions who nevertheless take pleasure in declaring ‘I am Brahman’. How much more shall I lament for these karmis (fruitive workers), jnanis (dry speculators), and tapasvis (who practice austerity), who are absorbed in sense gratification and are just like two-legged animals? Alas! They are not fortunate enough to have tasted even a drop of the nectar of Lord Gaura’s kirtana.

Pasanaah parisochito mrita rasair naivankurah sambhavet
Langulam saramapater vivrinatah syad asya naivarjavam
Hastava unnayata budhah aho dharyaam vidhor mandalam
Sarvam sadhanam astu Gaura karunabhave na bhavotsavah
–
Even if watered and nourished with nectar for millions of years, a stone will not sprout a single blade of grass. Even if a dog’s tail is stretched and extended , it will never become straight. A man may stretch out his arms as much as he likes, but he will never be able to catch the moon. Similarly a person may follow the various kinds of spiritual practices for millions of lives but he will not be able to attain the pure unadulterated love of God without achieving the mercy of Lord Gauranga.

Patanti yadi siddhayah karatale svayam durlabhah
Swayam ca yadi sevaki bhavitum agatah syuh surah
Kim anyad idam eva va yadi chaturbhujam syad vapus
Tathapi mama no manak chalati Gaurachandran mama
–
Even if the most rarely achieved mystic perfections were to fall into my hands, even if the most exalted demigods from the heavenly planets approached to become my servants, and even if i inadvertently achieved the four armed form of a resident of Vaikuntha, even then my mind would not swerve from Lord Gaurachandra for even a moment. 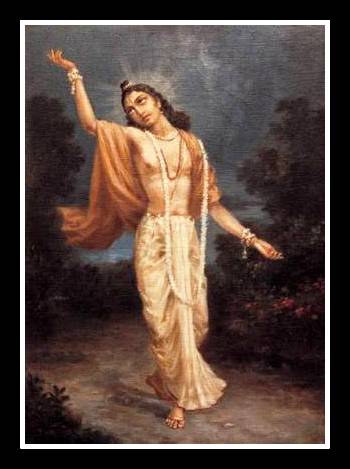