Narada Muni recites this wondrous pastime that took place between Shiva and Durga in Kailash. Once Narada muni arrived at Kailash and revealed to Mahadeva how he was somehow able to get a small amount of Lord Vishnu’s Mahaprasadam with great difficulty as Lord Vishnu had previously instructed Lakshmi devi not to share His food remnants with anyone. Lord Shiva expressed His displeasure when he learned that Narada had eaten all the Mahaprasada himself and did not bring any of it for Shiva. This article is a summary of the concerned chapter from Sri Chaitanya Mangala, which reveals Shiva’s love and reverence for Vishnu. Utkala khanda of Brahma Purana is the original source that records these astonishing pastimes.

(Lord Shiva asked Narada) ‘O sage, after obtaining the rare Mahaprasadam, you ate it all by yourself, not giving any of it to me. You have come to see me out of great love, but why didn’t you bring any of that great treasure ?‘

Then Lord Shiva began dancing in a fit of utter ecstasy. The weight of his feet caused the earth to sink in great distress. The story goes how Mount Sumeru began rocking back and forth in ecstasy due to Shiva’s uncontrollable Tandava. Mother earth trembled under the pounding of Shiva’s feet. There was a great wonder everywhere.

Completely forgetting himself and being overcome with an ecstatic love of God, Shiva, the king of Yogis, began trembling. His weight threatened to push the earth into the dark abyss of Rasatala. The hoods of Ananta then touched the back of Kurma deva. Sticking His head out of His shell, Kurma deva stared at Lord Ananta. 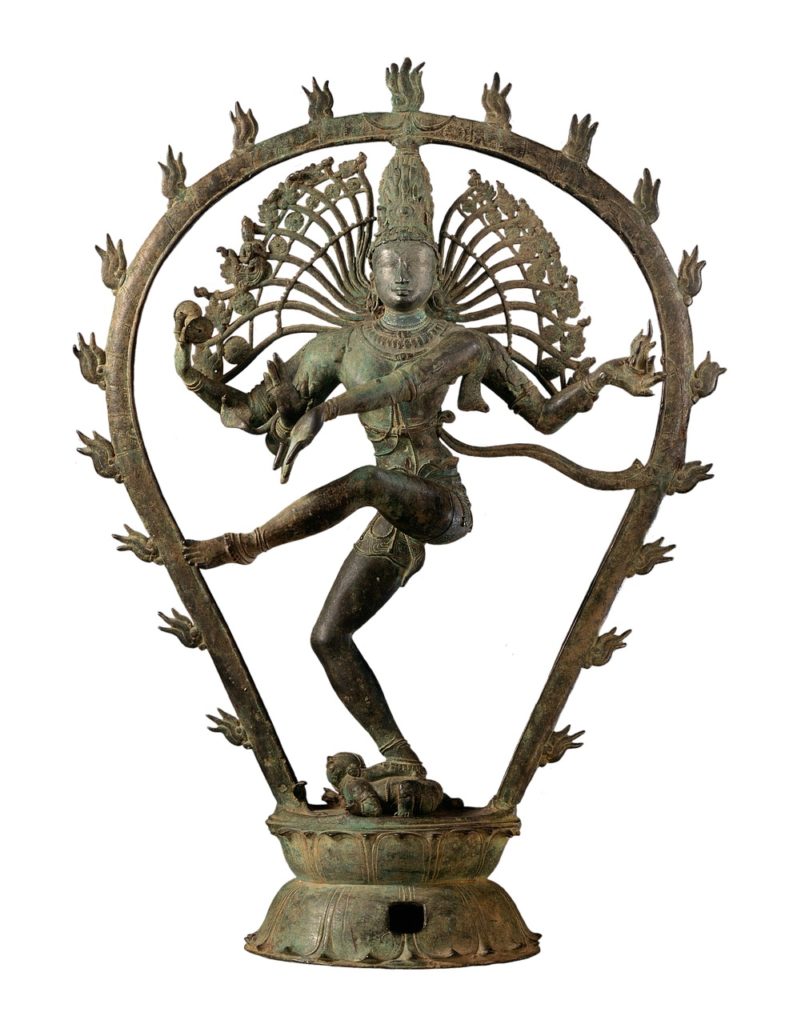 Translation –
Coming to his external consciousness, Lord Shiva became very sad. With a heavy heart, he exclaimed to his wife Parvati, “ What have you done, what have you done, O goddess. It is so wrong. By breaking my ecstatic trance you have effectively killed me”.

He added, ‘ But for you I have no other enemy in these three worlds. Why did you interrupt my bliss ?’ Hearing this, a distressed Parvati (Durga), spoke once more ,’ O Lord, look at goddess earth who now stands in front of you’.
(Goddess Durga continued) ‘The weight of your feet has pushed her down to Rasatala (lower realms). The material creation is on the verge of destruction. It is for this reason that I spoke harshly. Please forgive me for my offense O master’. Lord Shiva then smiled and bade farewell to mother earth.

Shiva and Durga Quarrel with each other :

Goddess Durga then submissively inquired of her husband once more, “I have one request for you, O Lord, as I am having some confusion. Every day you dance in the pure ecstasy of Krishna Prema. Why is it that today your dancing has pushed the earth down to Rasatala ?”

Translation –
(Goddess Parvati continued) ‘Today, your form is as effulgent and shines as brightly as millions of suns. Such is the brightness of this effulgence that it cannot be contained in the universe. Why is it that you feel an infinite wonderful bliss today ? O glorious master , Please tell me the reasons for this’.

Translation –
Lord Shiva replied to Durga, “Please listen to this blissful news. The great sage Narada has brought me the food remnants of Lord Vishnu. Lord Vishnu’s remnants are inconceivably rare in these three worlds. It is the nectar touched by the Lord’s lips. Even the Vedas do not know the end of glories of the Lord Vishnu’s Mahaprasadam”.

(Shiva continued to Durga) ‘I have now been able to honor this Mahaprasadam of my Lord and have thus made my life successful. Today is the most auspicious moment of my life. By the mercy of Narada, I was able to touch this Maha Prasadam’. In this way, Lord Shiva exhibited the wealth of his auspicious words in a very flattering tone. 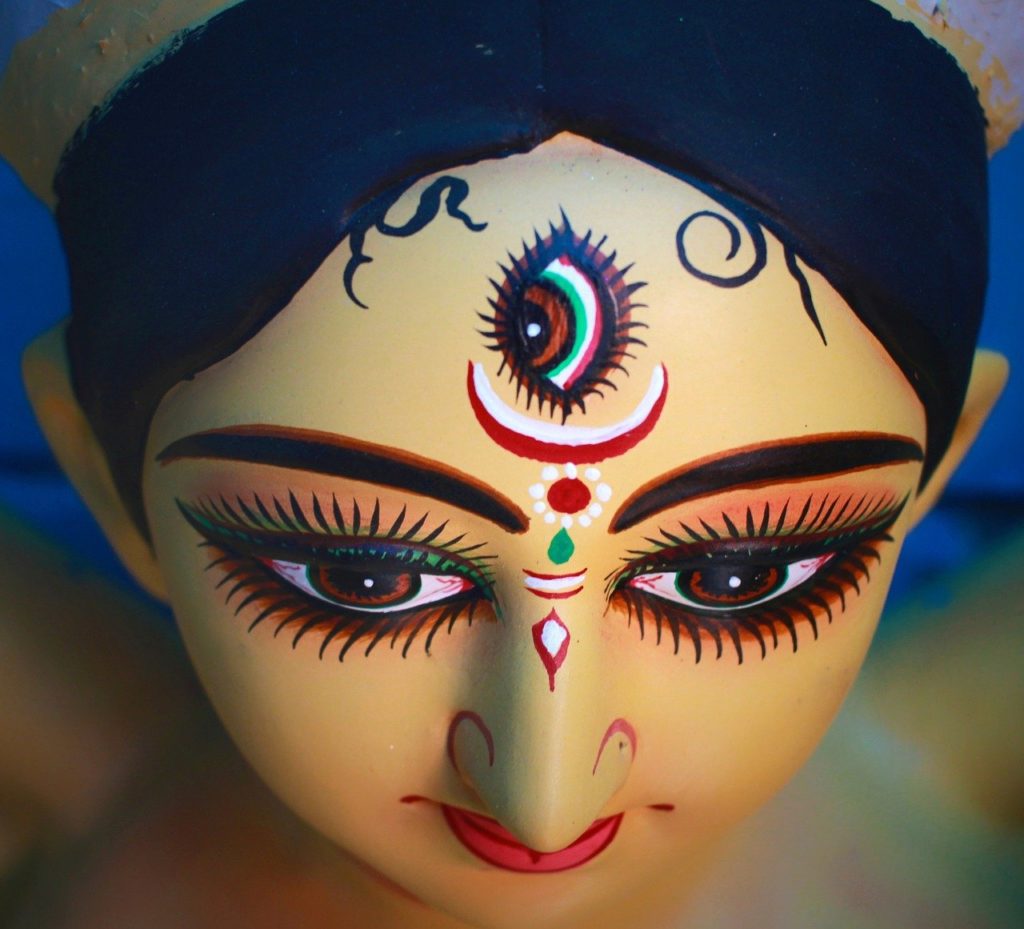 Hearing these words, Mahamaya devi (goddess Durga) exclaimed, “After all these days, I now understand that all your compassion, generosity, and acts of accepting me as your better half was all a pretense. Your false love for me has now been exposed”.
(Mahamaya devi continued) ‘O Lord, after obtaining that seldom attainable Mahaprasada, you ate all of it yourself, without sharing it with me’. Feeling guilty, Sulapani (Lord Shiva) expressed, ‘O Bhavani (Parvati), you do not have the right to receive this transcendental wealth’.

Lord Shiva argued that as mother Parvati was not a pure devotee of the Supreme Lord, Sri Krishna, hence she was not supposed to receive His Mahaprasada (Lord’s remnants). But this argument would be refuted by Mahamaya devi in her next statements.

Translation –
These words inflamed adyashakti (Parvati) even more. She said, ‘One of my names is Vaishnavi and I also serve Lord Vishnu with devotion. I hereby solemnly vow in this assembly, that if Lord Vishnu is merciful upon me in His heart ,then I shall distribute His Mahaprasada unto everyone in this material world. Due to my vow even the jackals and dogs will receive it’.

Hearing Katyayani’s vow, Lord Vaikunthanath (Vishnu) arrived there at once.
Durga devi stood up and offered her respectful obeisances unto Lord Vishnu. With tears in her eyes, and her heart overwhelmed, she sighed and began to speak.

The conversation between Lord Vishnu and mother Parvati that then took place is celebrated as Vishnu-Katyayani Samvada and we prefer to devote a separate article to it.