After a month of confinement (since Nimai’s birth), Saci Mata, accompanied by other ladies, went to take a bath in the Ganges. Amidst music, chanting, and joyous uproar Saci devi bathed in the Ganges. After worshipping mother Ganges, she visited the temple of Goddess Sashti and thereafter worshipped other demigods following proper rituals. Completing the formalities, the ladies returned satisfied. Saci devi offered the ladies roasted paddy, bananas, oil, vermillion powder, betel nuts, and betel leaf. The ladies in turn blessed the newborn and returned to their respective residences after offering their respects unto Saci Mata.

In this way, Lord Chaitanya manifested His childhood pastimes. Without the Lord’s mercy, these pastimes are incomprehensible. The Lord cried continually inducing everyone to chant the Holy names of Lord Hari. Hearing Harinama, He displayed a radiant smile across His moon-like face. Thus there was a continuous tumultuous sound of Harinama in Saci mata’s house. 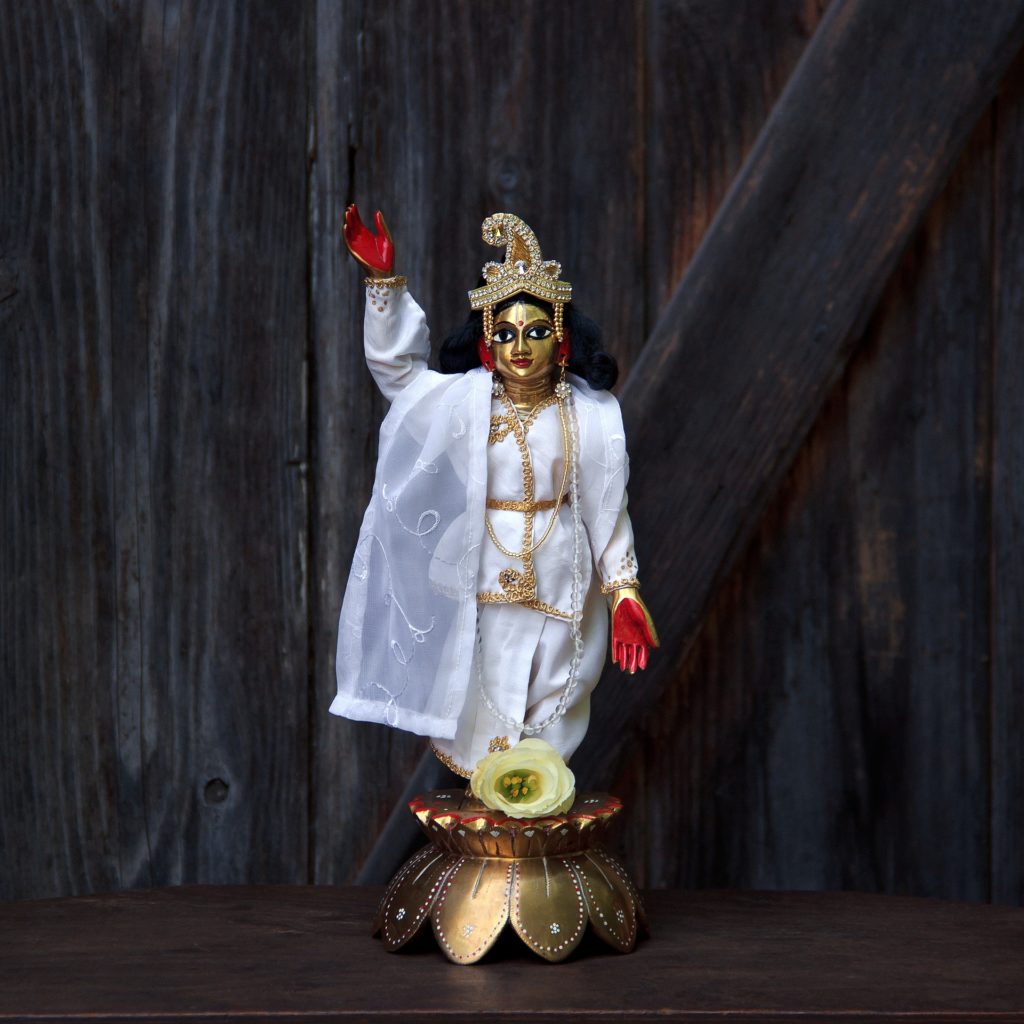 Just like Gopala, little Nimai was equally mischievous. Noticing that no one was near, the four months old boy would intentionally scatter things in His room. Later when someone would enter, he/she would find milk, ghee, rice, wheat, dahl, curd etc scattered all over. Meanwhile, sensing that someone was coming in, little Nimai would lie down on His bed and cry innocently. No one could understand as to who could have caused such a mess. “There was only a four months old baby inside”, they thought. Finding no trace of the culprit, people wondered whether it was the work of some demoniac forces. “These demons could not harm the child as He was being protected by mantras. Out of anger, they must have scattered the things around and escaped“, they concluded. Jagannatha Misra and Saci Mata were quite perplexed. But despite the damages, they felt their sorrows alleviated simply by looking at the child’s face.

Days passed in mystery until the naming ceremony of the child came about. Sri Nilambara Chakravarti, Saci Mata’s father, was a renowned astrologer of the day. He along with other learned scholars assembled to give a befitting name to the child. Respectable ladies also gathered to witness the glorious ceremony. One lady suggested, “This child will have no younger brothers or sisters. He was born the last in His family and hence He should be named ‘Nimai’ “. The learned scholars consulted amongst each other. Finally, they concluded –

E sishu janmile matra sarva-deshe deshe
Durbikhha ghuchila, bristi paila krishake
Jagata haila sushtho ihana janame
Purve yeno prithivi dharila Narayane
Ataeba ihana ‘Sri Viswambhara’ nama
Kuldvipa koshthiteo likhila ihana
‘Nimai’ ye balilena Pati-vrata-gana
Sei Nama dvitiyo dakibe sarvajana
(Chaitanya Bhagavata, Adi, 4.47-50)
–
As soon as this child was born, there was an end to famine everywhere and the farmers were rewarded with rain.
The world recovered to normalcy upon His birth. It is just like when Lord Narayana had previously shielded the universe (from destruction).
Therefore His name should be ‘Viswambhara’ (sustainer of the world). This is also confirmed in His horoscope.
The name ‘Nimai’ which the chaste ladies have suggested will be His second name.

The naming ceremony took place at the auspicious time when Bhagavad Gita, Srimad Bhagavatam, and the Vedas were being recited by the brahmanas. Humans, demigods assembled and celebrated this incredible occasion by chanting Harinama, blowing conch shells, ringing bells, etc.

Thereafter, rice, paddy, books, roasted paddy, coins, gold, silver, etc were placed before Nimai to test His nature. Sri Jagannatha Misra requested little Nimai to pick whichever item appealed to His heart. Leaving everything aside, the son of mother Saci, picked up Srimad Bhagavatam and embraced it. The ladies chanted ‘Jaya! Jaya!’. Some commented that the child would become a great scholar. While some concluded that the child would grow up an exalted Vaishnava who could easily discern the purport of different scriptures.

Whoever saw Lord Visvambhara’s enchanting smile became soaked in ecstasy. The Supreme Lord Viswambhara, who is unapproachable even by the demigods, now happily played in the lap of the ladies. Whenever little Nimai cried, the ladies would clap their hands and sing Harinama. In this way the Lord manifested His divine will.

Niravadhi sabara mukhe Harinama
Chhale bolayena prabhu – heno icchha taan
(Chaitanya Bhagavata, adi,4.62)
–
In one way or the other, the Supreme Lord (Viswambhara), by His divine will, had everyone constantly chanting Harinama (Lord Hari’s holy name)