(The below is adapted from Srila Bhaktivinoda Thakura’s Jaiva Dharma)

Of all the places on earth, Jambudvipa is the best. Of the places in Jambudvipa, the land of Bharatavarsha (India) is the most illustrious. Within Bharata, the land of Gauda (Bengal) is the best and within Gauda, the land of Navadvipa is the most exalted. The splendid village of Godrumadvipa, situated by the Ganges shore, eternally manifests itself in one section of Navadvipa. In the ancient days, several bhajanananda devotees (who were always engaged in chanting the holy names and glories of the Supreme Lord), built their homes and resided in this wonderful abode of Godruma. One such devotee was Sri Premadasa Babaji, who was an initiated disciple of Sri Pradyumna Brahmachari, an eternal associate of the Supreme Lord. It was not very far from this place that the celestial Surabhi cow once lived and engaged in deep meditation of Lord Gauranga.

Sri Premadasa was a great scholar of the Vedic scriptures. Knowing the land of Godruma to be non-different to Nandagram (in Mathura), he resided there chanting two lakh holy names a day and offering hundreds of dandavats unto the Vaishnavas every day. Strictly following the rules of saintly life, he did not engage in mundane conversations. Instead in his free time, he would recite from Srila Jagadananda Pandita’s ‘Prema Vivarta’. The devotees from the adjoining groves would then gather and listen with love and devotion.

A Paramahamsa Mayavadi sannyasi tastes a drop of divine love :

One afternoon, while Sri Premadasa Babaji was reading from Sri Prema Vivarta, an austere sannyasi (renunciant) approached him and offered his prostrated obeisances. Initially, the Babaji did not notice as he was absorbed in an ocean of divine mellows. Coming back to his external senses when he noticed the sannyasi, he bowed down to him crying out “O Chaitanya, O Nityananda, kindly be merciful upon me, a fallen soul”. Offering him a place to sit, the Babaji then enquired how he could serve the sannyasi.

The sannyasi replied, “O master I am very unfortunate. I have extensively studied the philosophies of sankhya, patanjala, nyaya (logic), vaisesika, purva-mimamsa, uttara purva mimamsa, upanishads, etc. I have spent a lot of time studying in Varanasi and other holy places. I have also invested a lot of time and energy debating the meaning of scriptures with others. It has been twelve years since I have accepted sannyasa (renounced order of life) from Srila Saccinanda Sarasvati Pada. Accepting the sannyasa danda I have traveled across the holy places of India, along with the followers of Shankaracharya. Passing through the sannyasa stages of Kutichaka, bahudaka, and hamsa, I had attained the exalted stage of Paramahamsa. Observing the vow of silence, I had taken shelter of the verses that have been delineated as the most important by Shankaracharya. These verses included – ‘aham brahmasmi’, ‘prajnanam brahma’ (Brahman is consciousness), and ‘tat tvam asi’.

Then one day, a saintly Vaishnava crossed by me singing the glories of Lord Hari. I witnessed that the Vaishnava was bathed in tears of love and ecstatic symptoms had manifested all over his body. In a choked voice he chanted the names ‘Sri Krishna Chaitanya, Prabhu Nityananda’ and danced with faltering steps. At times he even fell down to the ground. Gazing at him, my heart became filled with love, a feeling I have no power to describe. Yet, to keep my Paramahamsa status, I could not meet with this Vaishnava. I am wretched and so is my so-called exalted position. Wretched is my fortune.

From that day, I developed a compelling attraction towards the lotus feet of Sri Krishna Chaitanya. I had never experienced such ecstasy before. Nor did I know that such a feeling exists. I concluded that it was better to surrender unto the lotus feet of a Vaishnava for spiritual guidance. I left Varanasi and went to Sri dham Vrindavana. Over there I witnessed how devotees lamented crying out the names of Srila Rupa, Sanatana, and Jiva. I observed how they contemplated the pastimes of Sri Radha and Krishna. In voices choked with ecstasy, sometimes they cried out the name of Navadvipa and rolled about in the dust.

Seeing them, I developed a desire to take darsana of Navadvipa dham. Touring 168 miles of Vrindavana, I have now arrived at Mayapur, just a few days back. Your glories resound all over Mayapur. I have come to seek your shelter. Please be merciful and accept this servant at your lotus feet”.

One day the sannyasi asked Premadasa Babaji, “O master, for many days I have heard about religion. I have also asked many people about the truth of religion. But unfortunately, their answers were contradictory to each other. Therefore, please enlighten me about the true religion of a living being. And why do different teachers give different explanations of this true religion? If the truth is one, then why don’t all of these philosophers agree in their opinions?”

Meditating on the lotus feet of Sri Krishna Chaitanya, the Babaji replied,” O fortunate one, I shall explain to you the truth of religion as per my understanding. Please listen. The eternal characteristics or nature of an entity (Vastu) is its eternal religion. By the will of Krishna, when an entity comes into existence, it is created along with an original fundamental nature. This eternal nature of the entity (vastu) constitutes its eternal religion. Later, due to circumstances, when this entity comes in contact with other entities, it might develop a change in its nature. Over time, this changed or acquired nature becomes firmly established and accompanies the entity just like its original eternal nature. But this acquired nature should not be mistaken as the original nature of the entity. These changed characteristics of the concerned entity (vastu) are called ‘nisarga’. 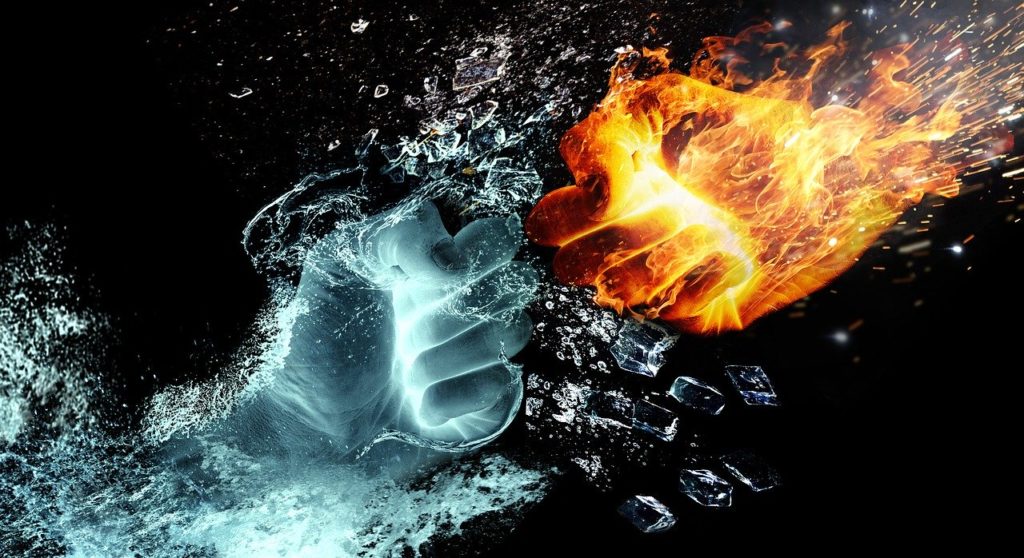 For example, water is an entity, and liquidity is its eternal nature. But when this same water is frozen into solid ice, then its liquidity is no more apparent. Instead, the solidity of ice becomes its acquired characteristics. But the ‘nisarga’ or acquired nature is never permanent. It arises due to a temporary circumstance and when the circumstance changes, the entity regains its original nature”. In our example, the solid ice changes into liquid water as soon as the freezing conditions are eliminated.

Srimad Bhagavatam (1.1.2) says – ‘vedyam vastavam atra vastu sivadam’ (The highest truth is a reality that is identified separately from illusion for the welfare of all). This verse implies that the world of spirit is the real entity. The Supreme Personality of Godhead is the only reality. ‘Jiva’ is part and parcel of the Supreme Lord and ‘Maya’ is the Lord’s illusory potency. Therefore when I refer to something or someone as an ‘entity’, I am actually referring to either the Supreme Lord, the jiva (individual spirit souls) or Maya (illusory potency of the Lord). These three entities exist in reality. Knowing the relationship between these three can be regarded as pure knowledge. There are differing conceptions about the true nature of these three entities. However, these ideas tend to be full of errors. The studies of Dravya (substance) and Guna (quality) of the Vaisesika school, for example, are nothing but considerations of entities that do not exist in reality”.

Babaji explained further ,” Srila Krishnadasa Kaviraja, a devotee who was a recipient of Lord Nityananda’s mercy, showed me a manuscript named ‘Sri Chaitanya Charitamrita’. In that book Sri Chaitanya Mahaprabhu advises as follows –

Jivera svarupa haya Krishera Nityadasa
Krishnera tathastha shakti bhedabeda prakasha
–
The original nature of a living entity is to be an eternal servant of Lord Krishna. The living entity is the marginal potency of the Supreme Lord Krishna and is simultaneously one and different from the Lord.

Krishna bhuli sei jiva anadi bahirmukha
Ataeba maya tare dei samsara dukhha
–
Forgetting his relationship with Lord Krishna, the living entity has been captivated by the external feature since time immemorial. Therefore Maya (illusory potency of the Lord) torments him with all kinds of trouble in his material existence.

Lord Krishna is the complete spiritual reality (paripurna cid-vastu). Some compare Him to the sun of the spiritual world. The ‘jiva’ or the living entities are like rays emanating from that sun. Krishna is one while living entities are countless. When we say that the jiva is a ‘part and parcel’ of Krishna, this comparison does not imply that Krishna is broken up into several pieces and He Himself ceases to exist. Krishna is not like the mountain which after being broken up into several parts, gets destroyed. Instead despite innumerable individual spirit souls originating from the Supreme Lord, He Himself is not diminished even by the slightest. 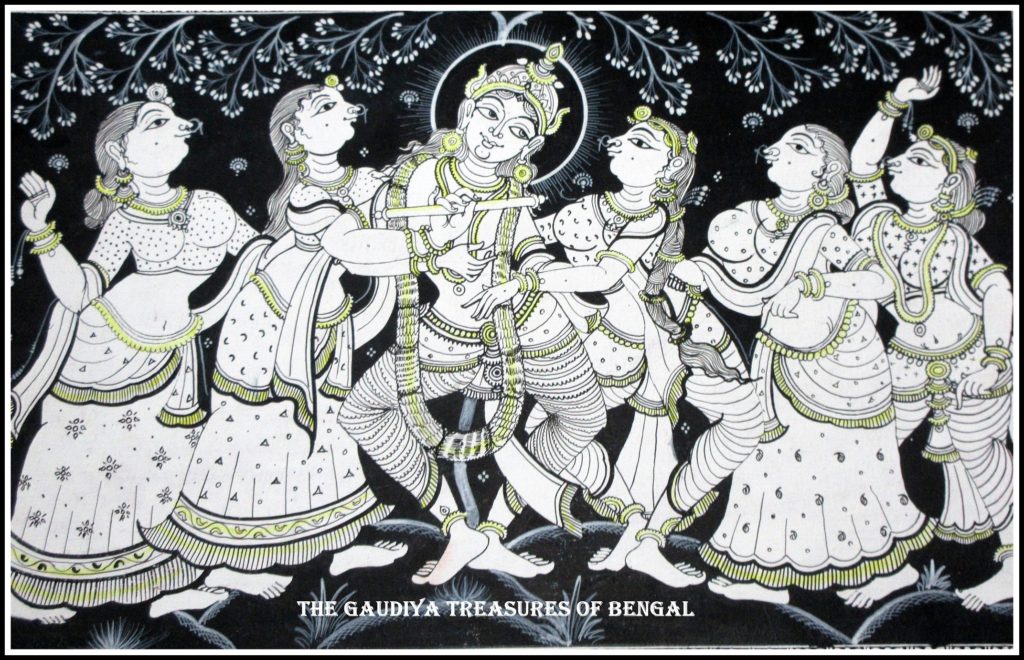 That is why the Vedic scriptures compare jiva (living entities) to sparks emanating from the blazing fire of Sri Krishna. These sparkles do not reduce the original blazing fire even minutely. However, none of these comparisons, provide an exact picture of the actual truth. Whether it be the analogy of the sparks arising from a blazing fire, rays of light emanating from the sun, or a touchstone converting the rest to gold – they cannot describe the complete situation. Rejecting them, if one sincerely looks inside his heart, one might realize the truth of the soul’s nature.

The Supreme Lord is the possessor of unlimited energies and unlimited potencies. For example, His ‘Antaranga Shakti’ or internal energy is responsible for manifesting the spiritual world. Similarly His external energy or the ‘Bahiranga shakti’, creates and controls the material world. We, the jivas or living entities, are a manifestation of the ‘tatastha shakti’ or the marginal potency of the Supreme Lord.
‘Tat’ refers to the boundary region between land and water and is considered to be a part of both. ‘Tat’ upholds the characteristics of both land and water. Similarly, the consciousness of the jiva or the conditioned living entity lies at the boundary of the pure spiritual realm and the realm of dull matter. 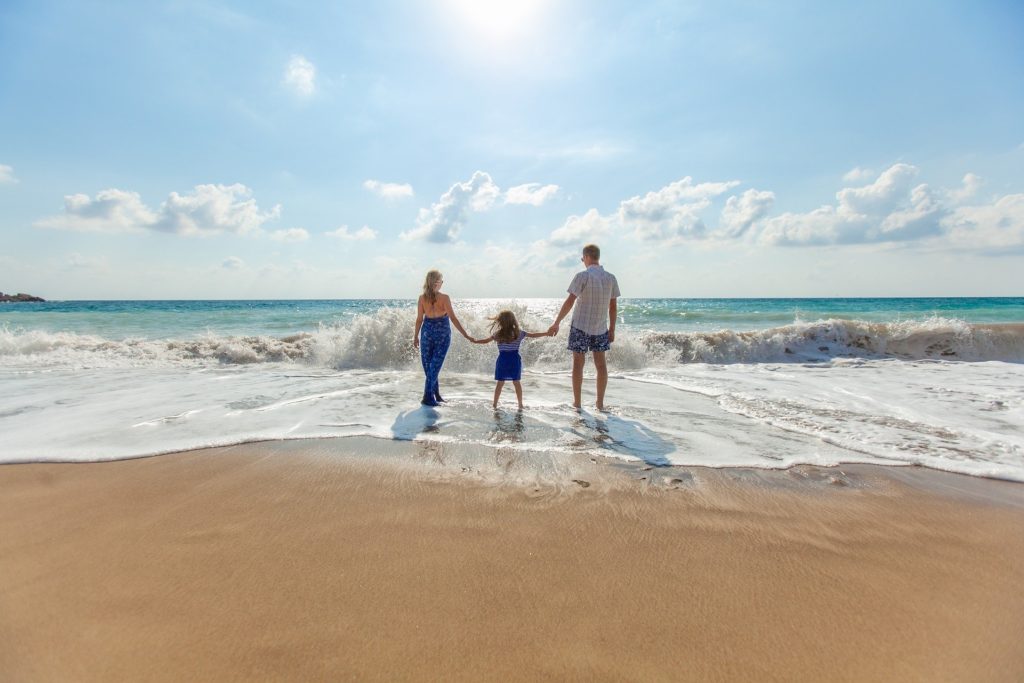 ‘nityo nityanam, cetanas cetananam’ – ‘Bhagawan is the supreme eternal amongst all other eternal beings. He is the fundamental conscious being among all the other conscious beings’.

The eternal original nature of the living entity is to serve Sri Krishna, the Supreme Lord. Its eternal nature is one, unchanged, and completely faultless. If he forgets his eternal nature and chooses to stay away from Krishna, then he comes under Maya’s control. Staying away from the Supreme Lord, the soul enters the material world. When he comes in contact with the material energy of the Lord, he acquires various temporary natures (nisarga) of great variety. However, its true nature (eternal religion) remains dormant and manifests itself again when the conditions are favorable.